As antique and vintage music boxes are very popular and becoming increasingly collectable we wanted to create this guide detailing some of the most popular music boxes you're likely to encounter.
In this post we'll also aim to provide useful information about their origins and how to keep them playing well, why they stop playing and how you can prevent this.
The most famous musical movements are the Reuge brand. They are crafted in Switzerland. The Stratton brand of musical powder boxes are fitted with Reuge musical movements. The most coveted music boxes are those that feature singing birds. Boîte à oiseau chanteur are usually ornately decorated and just below an oval lid is an exquisitely beautiful automaton singing bird which is activated when the lever is triggered. 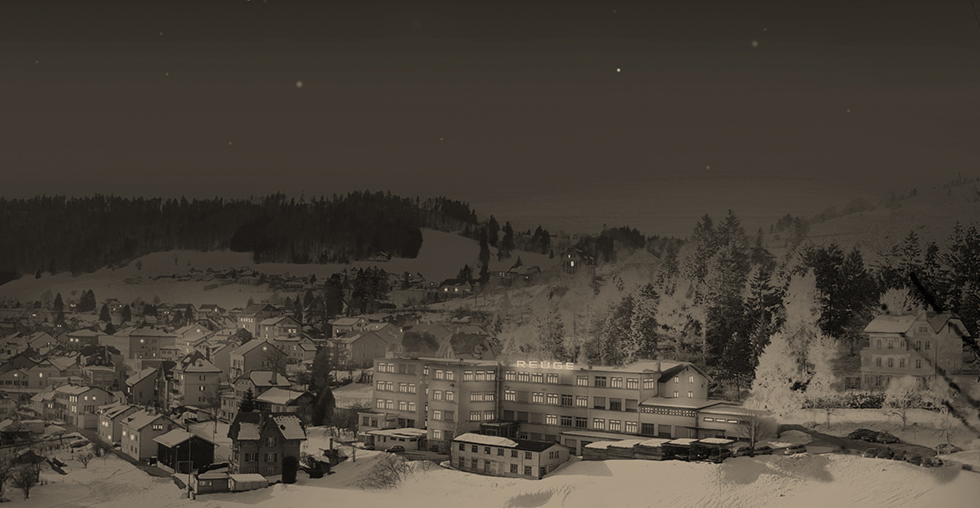 A brief history of Reuge:
Reuge was established in 1865 by Charles Reuge. The firm is widely considered to be the world leader in the manufacture of traditionally made luxury music boxes. Their limited editions dedicated to great composers and ornate boxes which feature signing bird automatons are known throughout the world. In 1886 Albert Reuge (Charles’ son) opened a music box workshop in Sainte-Croix, Switzerland. Charles' grandson, Guido, followed in his footsteps and guided the company for more than sixty years. Reuge expanded rapidly due to the great demand for their superbly crafted music boxes. Reuge is known as a pioneer of the mechanical music industry and became the first factory to acquire other competitors, as the demand for their music boxes was so high.
Guido Reuge, was fascinated by the mechanical singing birds. The firms singing bird boxes are legendary. The company motto is The Art of Mechanical Music.

It may seem a little strange when we think of what makes the 1960s famous, that Reuge decided to concentrate on reviving the singing bird music boxes. They took over the manufacture and marketing of mechanical singing birds of the Parisian company Bontems in 1960 and also Eschle in 1977. Not only this but they developed many new tunes to keep one step ahead of their rivals.

In 1988 Guido decided to sell the company, as he had no direct descendants. A group of Swiss investors purchased the firm. Further expansion followed and in 2001 Reuge purchased the company who had been its main supplier of wooden boxes. This ensured that the whole manufacturing process was now 'in house'. Today Reuge is the largest employer in Sainte-Croix.

A simple Reuge music box takes about three months to produce. Obviously, the more ornamental and complex designs take much longer to manufacture and adorn.

The artisans employed by this firm transform the score into a tune. They are experts in both musical and technological matters. 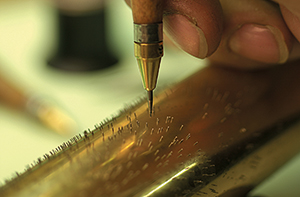 THE PROCESS OF PINNING

A machine drills tiny holes in the cylinder. Next pinning (see above) takes place….. needle-thin steel wire is inserted into each hole. It is then cut to form a pin. 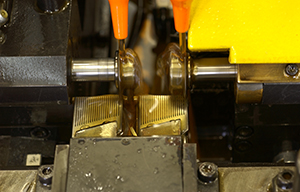 DRILL BITS CUT THE TEETH OF THE COMBS

These techniques were pioneered by Reuge. The next process is known as hardening. The comb is heated to nearly 800°C - it is plunged into a bath of warm oil. The comb’s extreme hardness is then reﬁned and managed by tempering. It has to be durable and not brittle - rigid and not too flexible. All these stages ensure the incomparable sound quality which has made this brand sought-after all over the world.

Lead is then poured under the comb teeth for the bass notes. This technique makes sure that the notes are clear. The lead is sawn by hand to create the teeth. Then the music box is tuned. Each tooth has to be filed to make the correct note.

Musical movements are assembled by hand. The cylinder, spring-housing, speed governor, trigger and tune indicator are assembled together on the base-plate. Then fixing the comb is the ﬁnal and most difficult operation. It requires a craftsman who can create the perfect sound using his experience and musical talent. 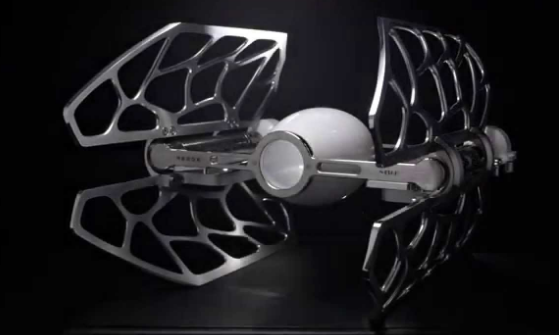 Today the firm goes from strength to strength. It is highly regarded and innovative. For example, the futuristic The Music Machine 3 –  was created in partnership with watch atelier MB&F.

It plays the theme tunes from Star Wars, Mission Impossible and James Bond. 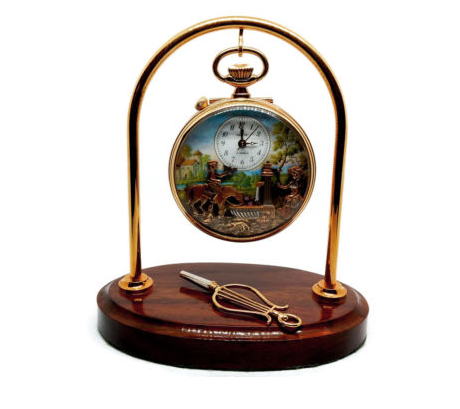 The Reuge Watch measures 2 1/2" (6 cm). The image shows this delightful creation on the original stand with the winding key. An animated scene shows a lady pumping water from a well for a horse. The horse is drinking, and the man astride the horse is trying to keep hold of a newly caught falcon that is trying to fly free. The watch contains 2 mechanisms: a mechanical watch movement and a tiny 17-note musical movement. An alarm is incorporated to start the music at a certain time.

The pastoral scene was designed by the enameller Carlo Poluzzi after a painting by Lancret, and the design on the rear was inspired by a Moreau engraving. There is a Breguet-style ratchet winding key in the form of a lyre. In the 1940s allied troops purchased music boxes in Europe to take home as tokens of love. The music boxes fitted with Swiss musical movements were so enchanting and reliable that musical boxes from Switzerland were very much in demand. This trend did not go unnoticed by the makers of the Stratton brand who were known as Jarrett, Rainsford & Laughton Ltd., until 1958 when the firm was renamed Laughton & Sons Ltd.  This company became regular customers of Reuge and Thorens, purchasing their high quality musical movements for their beautiful enamel ‘‘Musicas’ which became known as ‘Musical’ in 1964.

Reuge musical movements were considered superior and more reliable than their rivals. The company also had a larger repertoire of tunes. Only the best would do for the Stratton brand. Seventy years later the Stratton 'Musica' and 'Musical' powder boxes are still playing reliably well and looking splendid.

The most coveted of the Stratton musical powder boxes are those adorned with ballet scenes which were often taken from Stirling Henry Nahum's photographs.  He was also known as Sterling Henry Nahum. He used the name Baron to sign his photographs, as this was his professional name.  His most notable work was as a society and court photographer in the United Kingdom. He had a special interest in photographing ballet dancers.

1957 was the first known year of availability for the Stratton 'Musica'. The series was part of the luxury range of Stratton vanities. The body of the powder box resembles the 'Empress' and the 'Grosvenor'. All ‘Musica’ and the later model ‘Musical’ powder boxes are considered uncommon to rare, depending on the lid decoration. The image above shows an unused Lucite Stratton 'Musica' which has all the original accessories - presentation box, pouch, box sticker, instruction leaflet, puff and sifter. The lid is a beautiful design of musical notes with facet cut rhinestones set atop Lucite. All musical boxes are different. Some may require three full turns in a clockwise direction to play the whole tune. Others may only allow two quarter turns before you feel as though the winding key is becoming a little resistant. Always cease winding if you feel any resistance. We become familiar with our adorable little music boxes. While they live with us they will be played once a month and oiled if necessary. When we have found a new home for one of them we make sure to ship the piece with its own winding instructions so that the new owner will know how to wind the music box.

Here are some tips for keeping your musical powder box in good working order:

How to play your musical powder box: Kigu Ltd. were the only specialist maker of vanities who crafted music boxes entirely from sterling silver. These exquisite creations were limited editions at the time of their launch. In the twenty-first century they are extremely rare. The Kigu music box shown above is sterling silver throughout, except for the musical movement and the mirror. This vanity was assayed in London in 1959.
The exterior lid was described by Kigu Ltd. as follows: -
The shimmer of silver in flawless satin finish presents the right background for the glittering bright design of flowers and butterfly. This musical compact is a treasure to be coveted by all lovers of beautiful things.
Kigu Ltd. also made musical powder boxes from brass. An adorable working 1950s Kigu Minuette music box which is fitted with a lovely Perspex (Lucite) shamrock decoration. The original pouch, puff and sifter are present.

The inner case is signed ﻿KIGU ﻿and also ﻿Minuette. The base is also signed ﻿﻿KIGU MADE IN ENGLAND REG.DES. ﻿The base has a lovely scalloped design. The whole musical powder box is protected by the Kigu ﻿jeweller's gilt finish﻿ which will prevent tarnishing and so this vanity will not require any cleaning. The catches and hinges work perfectly. Measures 8.5 cm long. Weighs 129 grams. MASCOT MUSICAL POWDER BOX
Thorens, Schuco, A.S. Brown (Mascot) & Kigu:
Most of the specialist vanities manufacturers launched ranges of musical powder boxes. As long as they have not been over-wound or clogged with face powder they play as reliably today as they did back in the day. MASCOT BRAND MUSICAL HANDBAG SHAPED COMPACT
The image above shows an adorable Mascot musical handbag shaped powder compact which was crafted in the 1950s by A. S. Brown & Co (Manufacturing) Ltd.  The puff is signed Mascot A S B. The exterior case has a delightful engine turned design. The ornate gilded handle is functional. Push it back slightly to access the interior case. The inner lid is signed Mascot A S B within an oblong cartouche. The left hand side is decorated with a musical score. The original mirror sticker is in place. It reads - THORENS Swiss Movement Blue Danube Waltz.
A.S. Brown, owner of the Mascot brand, manufactured music boxes in the shape of handbags, as well as those in the normal rectangular shapes. They are fitted with Thorens Swiss musical movements, as are those of Kigu Ltd. The history of Thorens music boxes began c.1883 when Hermann Thorens began to make musical movements in Sainte Croix, Switzerland. Eventually, the firm would go on to supply complete music boxes to Silverite, Anri and Fred  Zimbalist. Compact collectors will be familiar with the Schuco brand.

SCHUCO RADIO CAR
Thorens supplied musical movements for the Schuco Radio Car 4012. Flick the radio switch and the music plays after the car has been wound using the key which is signed 'Schuco'.

A brief history of Sankyo:

NIDEC SANKYO has dominated Japan's history of musical movement production for more than half a century. In the far east the Japanese firm was busy perfecting its musical movements in the 1940s. Today we can hear them play in our mid-century Clover brand music boxes. 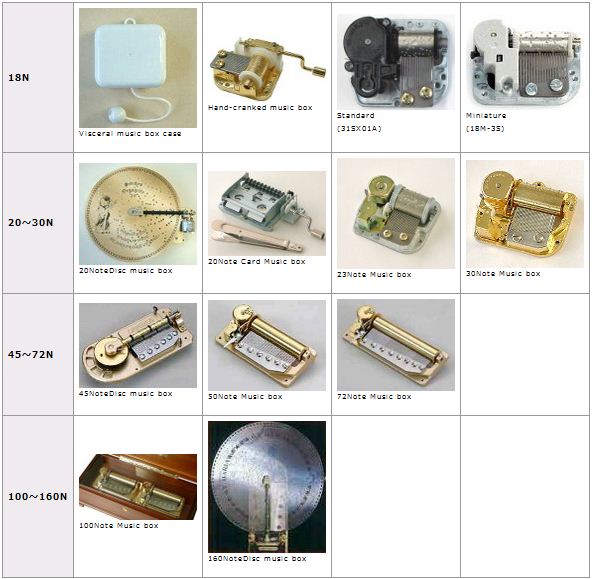 In 1946 Sankyo Seiki was established in Suwa. The firm is now known as the Nidec Sankyo Corporation. Within two years the first sets of music boxes were being produced as experiments to test their durability. The first six sets unfortunately had 'teeth' that broke. There were other musical movements that were more durable but the sound quality was not good enough. By the end of 1948 Sankyo were pleased enough with their products to fulfil an order for 500 music boxes. At one time Sankyo is said to have produced 90% of musical boxes in the world. 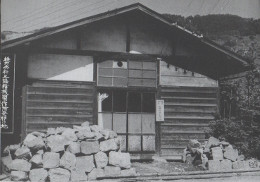 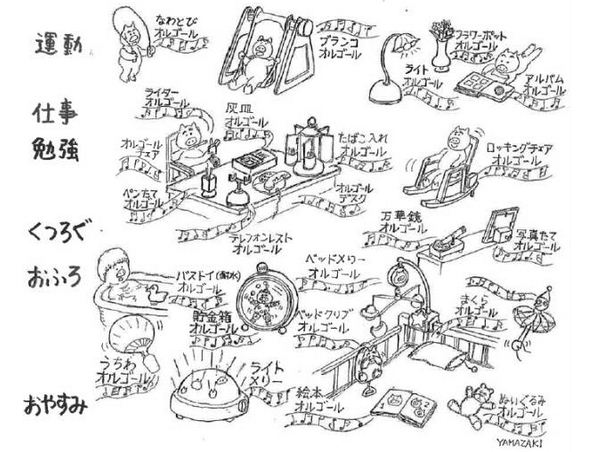 American brands such as Volupte also made splendid music boxes. The link below will take you to an illustrated timeline for Reuge music boxes: