In 1775 Jonathan Mappin started a small cutlery workshop in Sheffield, which grew into a huge manufacturing concern. Within a year the first Mappin hallmark was recorded at the assay office. In 1780 Jonathan Mappin was given the Freedom of the Cutlers Company. As you can see from the image below this became a hugely successful concern. The company expanded internationally and received royal commissions from all over the world. Monarchs were so impressed by the excellence of the goods produced that royal warrants followed.

The name of this enterprise became synonymous with excellence and their wares symbolized the best of British.

We have included an illustrated timeline at the bottom of this page.

The Royal Cutlery & Silver Plate works were situated on Norfolk Street, Sheffield. The melting furnaces, rolling mills, hammer shops, steam-stamp shops, grinding wheels and forging hearths ensured that the firm could control the whole manufacturing process. The cutlery / flatware would be finished by  silversmiths and cutlers, who would add intricate engravings, chasing and fluting to all manner of tableware and accessories. Buffing of cutlery was also done by using machinery. This was especially hard and dangerous work, as the spoons or items which required buffing would get very hot and the workers, who were usually women, would bind their fingers so they could bear the intense heat. If the bindings came away from the fingers and got caught in the machinery this could cause serious or fatal accidents.

Items that required gold or silver plating would be sent to the plating room which contained some of the largest cast-iron vats in the world.

Joseph, Jonathan’s son, followed him into the business. Joseph’s grandson, also called Joseph did so too. But it was his four great grandsons who were responsible for the huge growth of this enterprise in the mid nineteenth century. These gentlemen incorporated the business which became known as Mappin Brothers Ltd.

In 1849 the first London based showroom opened on 17 Fore Street and shortly afterwards the eldest brother was knighted and became Sir William Mappin and as the business grew the brothers began to take a different path. 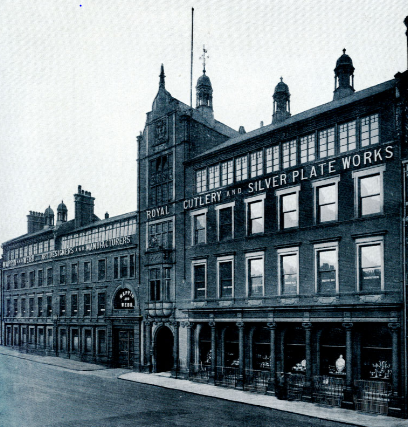 Sir William Mappin left the firm in 1859 and became the senior partner at the Thomas Turton & Sons’ steel mill and gave his share of the company to the other three brothers. In 1860, the youngest brother broke away from Mappin Brothers and started his own business Mappin & Company.  In 1862 he was joined by his brother in law George Webb. George Webb’s name was included in the company name from 1864, it was only in 1868 that Mappin and Webb & Co. was formed. Unfortunately, George Webb died in 1868. The name of Mappin & Webb Ltd. was recorded in 1889. In order to celebrate Queen Victoria’s Golden Jubilee in 1887, a committee of ladies was formed to raise money for a commemorative statue of Victoria’s late husband, Prince Albert. The committee was so successful that they raised far more than was required. The committee and Queen Victoria agreed that the excess funds should go to the St. Katherine’s Fund for Nurses. However, some members of the committee decided that a portion of the funds should be used to purchase a necklace for the Queen.

Mappin & Webb were the jewellers chosen to create this celebrated piece. THE ILLUSTRATED SPORTING AND DRAMATIC NEWS 1890

The advertisement shows some of the huge range of -

Top row - a cased silver plated brush set, a clock and compass set framed by horseshoes with crossed hunting crops set atop and a sewing set.

Next row - leather bound book, a cased grooming set, a sewing set, and a barometer.

Next row - wallets, a cased scissor set, a cheroot case and purses. Prince's plate involved a triple layer of silver on the firm's silver plated wares. This process ensured that their Prince's plate pieces had a much more durable finish that was less prone to wear.

The advertisement above shows a wide variety of elegant cased condiment, serving and flatware sets.

Mappin & Webb received its first Royal Warrant as silversmiths to Queen Victoria in 1897.

They have continued to hold Royal Warrants as Silversmiths to each of the five subsequent monarchs. 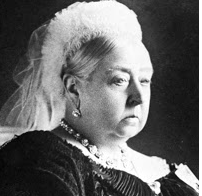 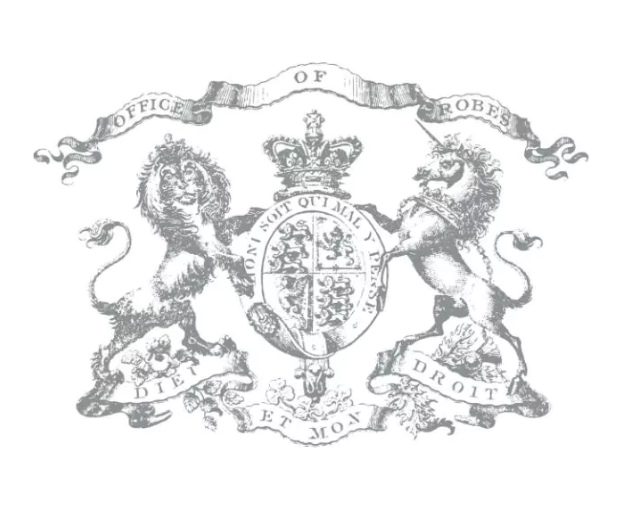 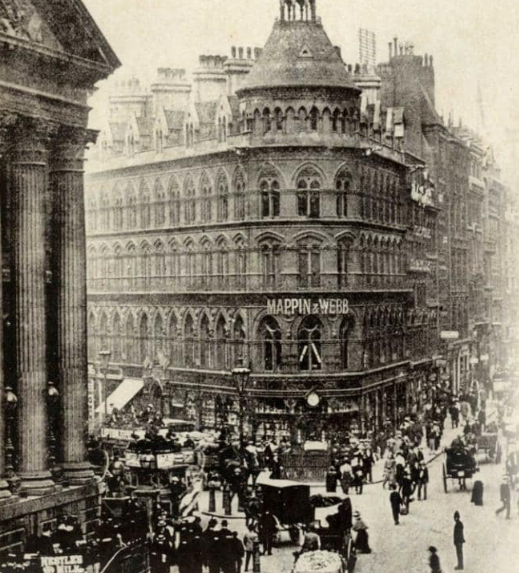 The public supplied by Actual Makers at Manufacturers'

Mappin & Webb are one of the most prestigious British jewellers & command huge prices for their jewellery and luxurious accessories. The workers shown above are fulfilling an order placed by the Indian government. The cutlery is in the Louis style, referring to the style of the French Kings.

Mappin & Webb jewellery, cutlery & accessories are quite simply fit for a king or a queen. 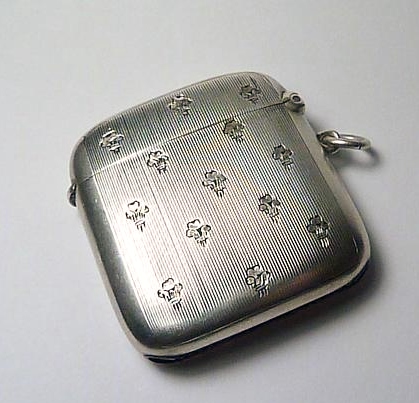 
The case still has the original hanging ring, as it would have been worn on an Albert chain. It is superbly made. Each side has a bold engine turned linear design. 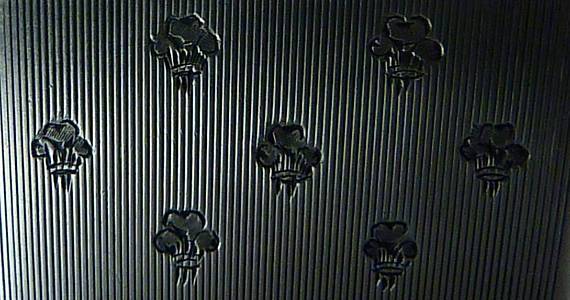 MAPPIN & WEBB ART DECO POWDER BOWL 1922
A unique high quality powder bowl in the original presentation box, commissioned by Mappin & Webb in 1922. This powder well of this superb antique powder compact is signed "MAPPIN & WEBB LTD". The beautiful lid has the most gorgeous and subtle cream guilloche enamel which is without losses or fading. The enamel is an even colour. Set top, an impressive lapis lazuli cabochon
More fabulous hallmarked silver and enamel vanities. This fabulous signed sterling silver Art Deco Mappin & Webb powder compact combines the most stylish era in history with the Mappin & Webb reputation for elegance. This piece is extremely rare and not one we have seen before. The vermeil powder well is signed 'MAPPIN & WEBB LTD LONDON'. The hallmarks are clear and unworn. It is easy to see the maker's mark, Birmingham Assay, date year L (1935) and also the rare hallmark commemorating the Silver Jubilee of King George V.

The whole compact is decorated with a complex engine turned design which prevents the appearance of fingerprints. The lid is engraved with the classic Art Deco motifs of three highly stylized skyscrapers. A superb Mappin & Webb sterling silver loose and pressed foundation powder compact, which was crafted in 1969. This exquisitely beautiful fully hallmarked sterling silver and guilloche enamel compact mirror is decorated with the most quintessentially English hand painted floral bouquet. Red, pink & yellow poppies interspersed with golden ears of wheat in colours as vibrant as the day they were painted!

MARKS OF THE FIRM

You can find out more on the history behind this iconic jeweller in our fact packs that come with every order - shop Mappin & Webb gifts here.

1897 Queen Victoria granted the firm a Royal Warrant to the firm. 1904 The Maharaja Raj Rama Bhawaur Singh commissioned a silver bedroom set, including a four-poster bed and a dressing table set. 1914 MAPPIN CAMPAIGN ADVERTISEMENT
Watchmakers to The Admiralty
Mappin's Famed
'Campaign'  Watch
This fine wristlet watch was
first used in great numbers at Omdurman,
And dessert-experience is the severest test
a watch can have.
During the last Boer War it renewed its
high reputation for reliability under trying
conditions.
It is compensated and jewelled. In silver
case with stout inner dome, it is absolutely
dust and damp proof.
It is fitted with a luminous dial, which
shows the time on the blackest of nights.
£2:10:0
Mappin & Webb Ltd
Silversmiths to his Majesty King George V
158 - 162 Oxford St., W. 2 Queen Victoria St., E.C.
220 Regent St., London, W.
Royal Works - Sheffield.
1914 Mappin & Webb supplies watches to the Admiralty. The Campaign Watch was available in stainless steel for £2:10:0 and also a luxurious version crafted from 9 ct gold. The advertisement below dates to the 1930s and shows that the stainless steel watch was retailing for £2:15:0 and the 9ct gold model was priced at £6:15:0. 1915 The firm's huge Sheffield factory was given over to manufacture parts & supplies for the war effort.
1918

DIRECTORY OF MANUFACTURERS IN ENGINEERING & ALLIED TRADES
During World War I the company helped in the war effort by manufacturing:
Copper shell bands, 3-inch Stokes' bombs. Sterilising boxes. Primer bodies. Fuze noses. Tin-plate covers. Covers for No.80 fuze. 4-inch W.P. bombs. Shrapnel discs.
As you would expect during this time, the female workforce outnumbered the men. Two hundred and sixty one females and two hundred and nineteen male employees were working at the Norfolk Street factory in 1918.
The work listed for the firm prior to WWI was:
Cutlers and silversmiths. Designers. Hotel and steamship contractors. Electroplate and cutlery for W.O., Adm., and export.
﻿W.O. is the War Office and Adm. is the Admiralty.
1930s During this decade the firm's principal work was supplying hotels, restaurants and steamships with luxurious cutlery and tableware. 1 RUE DE LA PAIX PARIS
1939 The Mappin & Webb boutique in Paris was ceased by the Nazis. The fabulous necklace shown above was crafted by Mappin & Webb in Rio de Janiero. The aquamarine stones are set in platinum and diamond mounts. This splendid piece was a gift from the President of Brazil for the Queen’s Coronation in 1953. A pair of matching earrings were also included.

1958 Queen Elizabeth was presented with a matching bracelet and brooch.

In 2012 Martin Swift who is one of the craftsmen at Mappin & Webb was also appointed The Crown Jeweller.

The firm's association with royalty continues to this day. 2014 On April 8 Queen Elizabeth II & Prince Philip hosted the first Irish state visit to Britain. President Michael D Higgins and his wife Mrs Sabina Higgins travelled to Windsor Castle. During this visit the Queen wore the Mappin & Webb orchid brooch, which is shown in the photo above. This brooch was a gift from the Crown Jeweller, Martin Swift & Mappin Webb in collaboration with Waterford Crystal. The flowers are hand cut Waterford Crystal. In the middle are rose gold stamens set with 66 diamonds.

Waterford glassworks have Irish origins which date to the 18th century.

The President of Ireland also attended meetings with the British Prime Minister, David Cameron, the Mayor of London and leaders of the opposition parties at Westminster Palace.

2015 Mappin & Webb was engaged by the 1st Battalion Grenadier Guards to craft a silver statue of the Duke of Wellington to commemorate the 200th anniversary of the Battle of Waterloo. 2016 sees the re-issue of the Campaign Watch.