The brand name Zenette was owned by the Collins family. The company name was registered as C.H. Collins & Sons Ltd of Hockley Hill, Birmingham, England. We know that the firm was active in the Victorian era, as Charles Howard Collins was granted Letters Patent in 1896 for one of his stud designs.

The improved design is shown in the subsequent patent below.

﻿My invention relates to an improved stud or solitaire, in which the head is not constructed in such a manner that it is detachable from the lower portion, but is so arranged that it can be readily passed or threaded through the button holes without detachment and is a combination and improvement upon the mechanism for which Letters Patent were granted to me, under No. 29143 of A.D.1896. 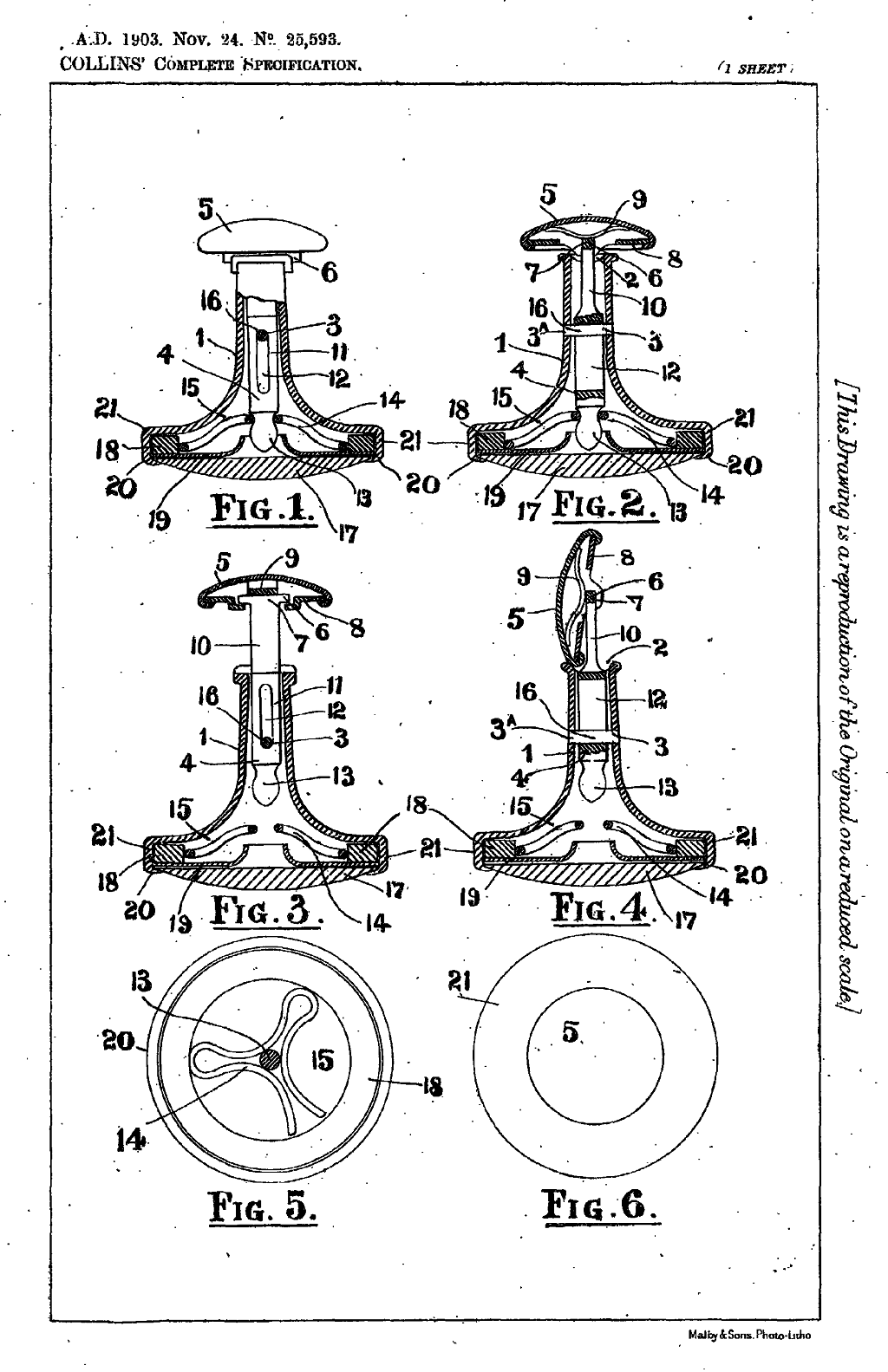 Another patent application for Improvements in Studs, Solitaires, Dress Fasteners, Bracelet, Necklet or Glove Fasteners, and the like was accepted on October 5 1905.

The inventors are listed as Charles Howard Collins, Charles Ernest Collins and George Dawson Collins. The business premises was located at 47-48 Hockley Hill Birmingham. At this time the company was registered as Charles H. Collins & Sons Stud Manufacturers.  Another stud maker was also involved with this patented design and the crafting of studs. He is listed as Thomas Harris of No. 12 Handsworth Road, Staffordshire.

The invention is described by the makers as follows -

Having now particularly described and ascertained the nature of our said invention and in what manner the same is to be performed, we declare that what we claim is :

1. In studs or solitaires and the like consisting of two separate parts, the means of locking and releasing the two separate parts, constructed, arranged, operated and controlled by the action of the central pillar 12, as described and illustrated, and for the purpose set forth. 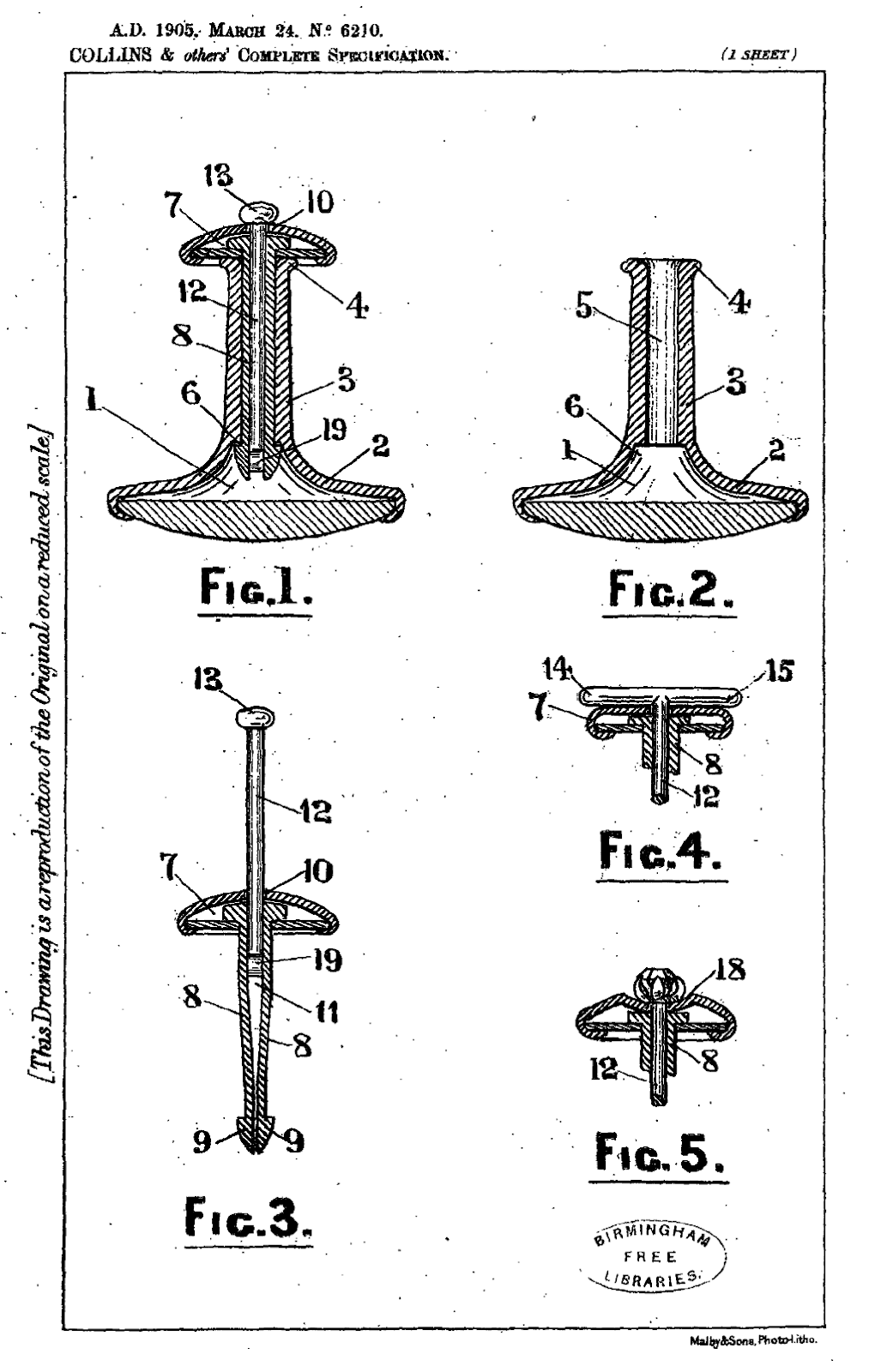 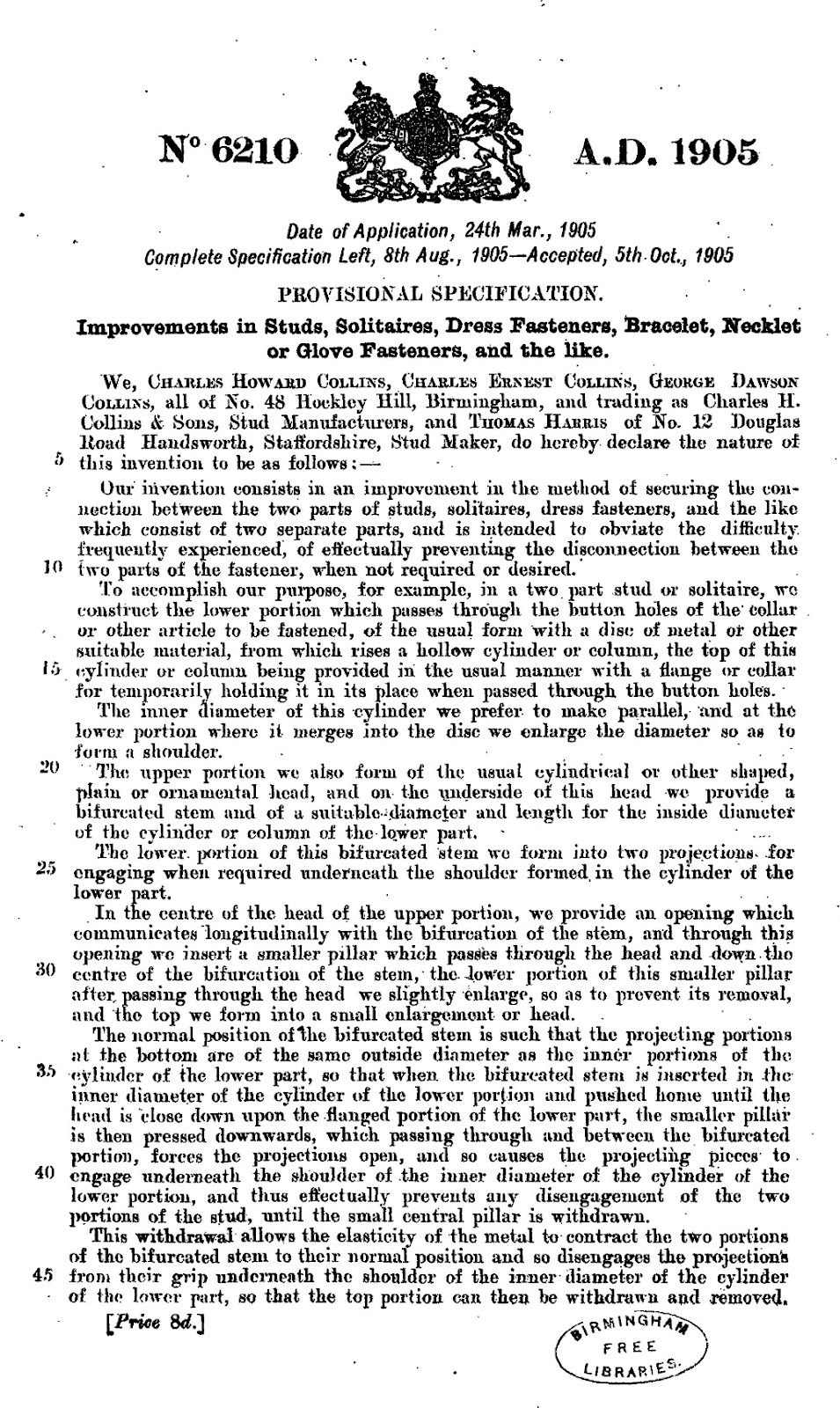 We can see from the advertisement shown at the top of this article that the company trademark is a lion rampant into an oval bordered by the Greek key design. They named this trademark the ﻿Lion Patent.

The company patented at least three designs of studs.

The Perfectus Patent Stud was marketed with the following statement:

GUARANTEED ABSOLUTELY SECURE UNTIL THE TOP IS RELEASED BY THE WEARER

﻿The ﻿Arcanus Stud﻿ was promoted as:

﻿SIMPLE & DURABLE WILL NOT WEAR THE BUTTON HOLES

TO RELEASE PULL THE TOP OF STUD

﻿The ﻿third design shown in the advertisement is described as:

The company's legal representatives would vigorously persue any businesses who dared to use their patented inventions.

One such case was referred to the Court of Appeal. Green & Cadbury's appeal against C.H. Collins & Sons Ltd. was thrown out. C.H. Collins' design was patented and no one else was permitted to use it without prior permission from the company which is why Green & Cadbury lost the case.

By the Victorian era prepared starch was commercially available in boxes. Blue starch was used to stiffen and also whiten white material. Detachable collars had become very popular, as it is this area of the shirt which becomes dirty more often than the whole shirt. It was easier for the wife or servant to provide her husband or master with a clean stiff collar each morning rather than having to launder a whole shirt. Detachable collars were worn by all classes and the term white collar workers derives from the wearing of white collars by office workers.

The stiffened whitened material required something stronger than a button to secure it and so dress studs also grew in popularity.

In the Edwardian era tall, highly starched collars were being worn by many men in England and also in the colonies and so the company derived a good income from the sale of studs.

During WWI and WWII the company business was given over to war work, as is customary in times of war.

On August 18 1916 Charles Ernest Collins applied to patent a device which we now call the press stud. 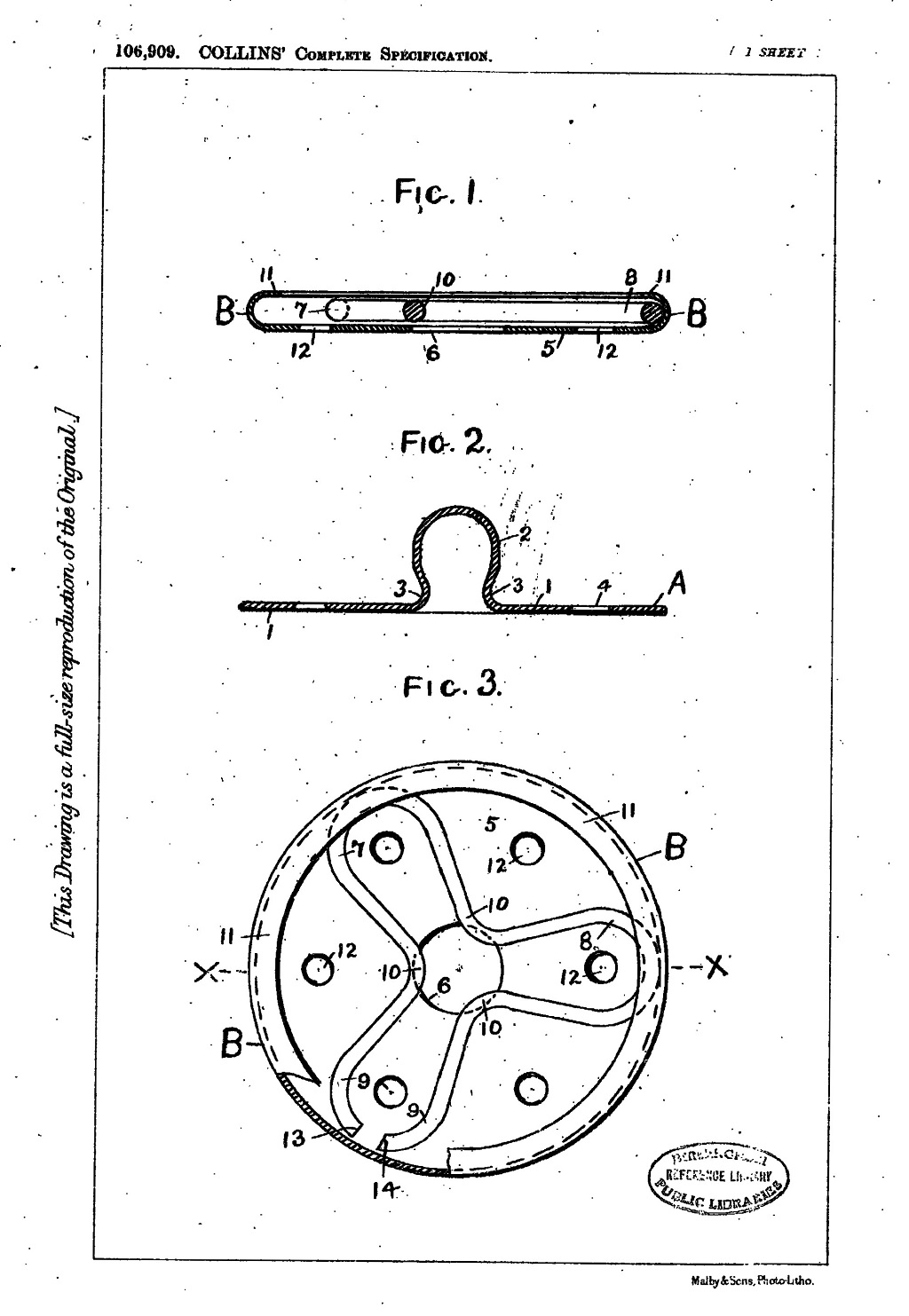 The image above shows the firm's listing in the 1918 Directory of Manufacturers in Engineering and Allied Trades. The middle column details war work and the right hand side lists the main type of business conducted during peace time.

During the war years (28 July 1914 – 11 November 1918) most of the able bodied men would have been away fighting and so it is not surprising to see that female employees out number male staff. The company's war work involved making small tools, taps, dies and fuzes. The supply of press studs may have also been part of the war work.

By the late nineteenth century the penny farthing had been replaced by the safety bicycle which had pneumatic tyres and chain driven rear wheels. This mode of transport allowed people who did not own horse drawn vehicles to travel much further to work and play. Trousers needed to be fastened with a clip at the bottom to prevent the chain from becoming caught in the material.

The patented design was described as:

Improvements in Neck Tie Clips, Trouser Clips, Stocking Suspender Clips and the like 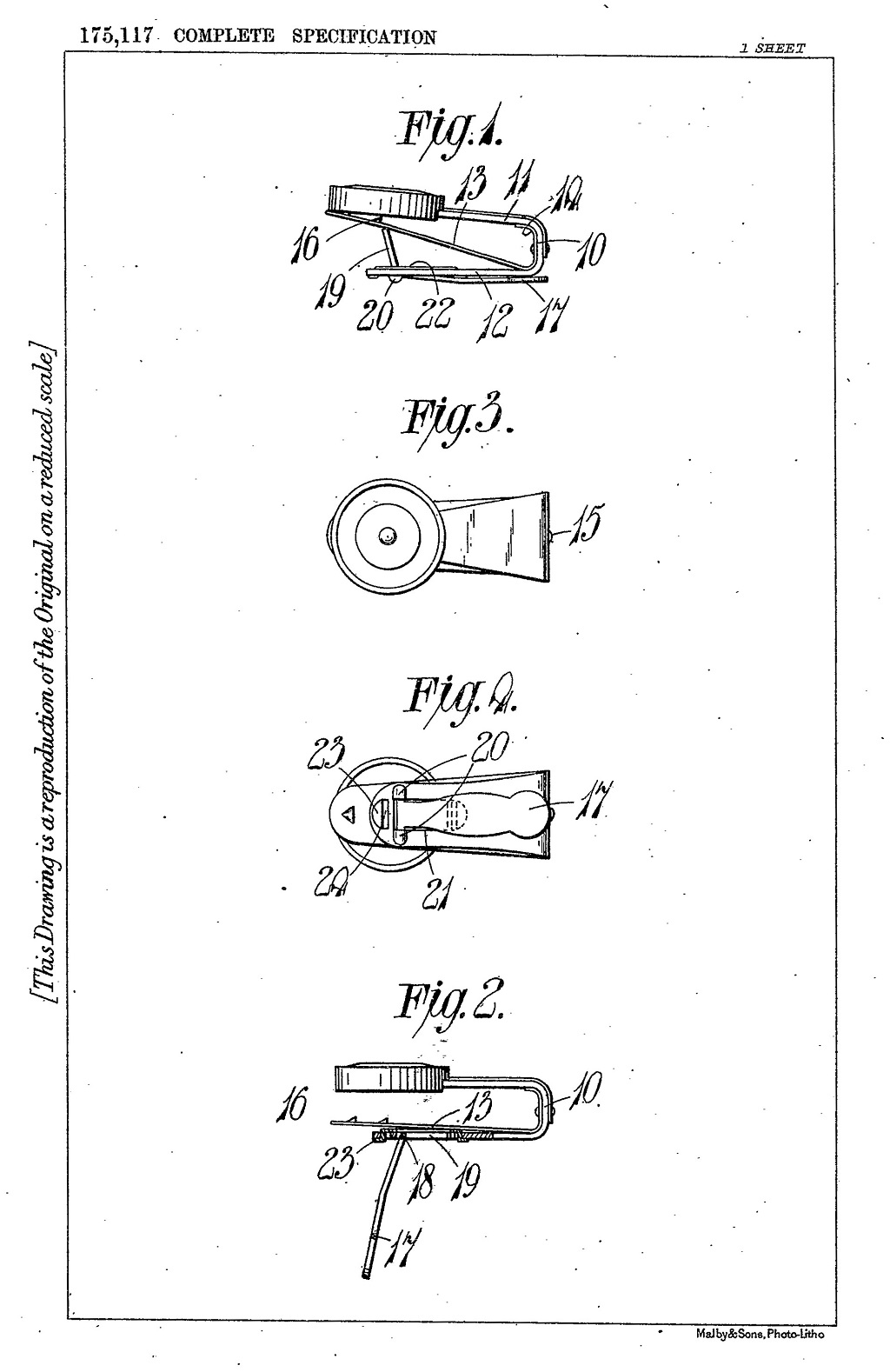 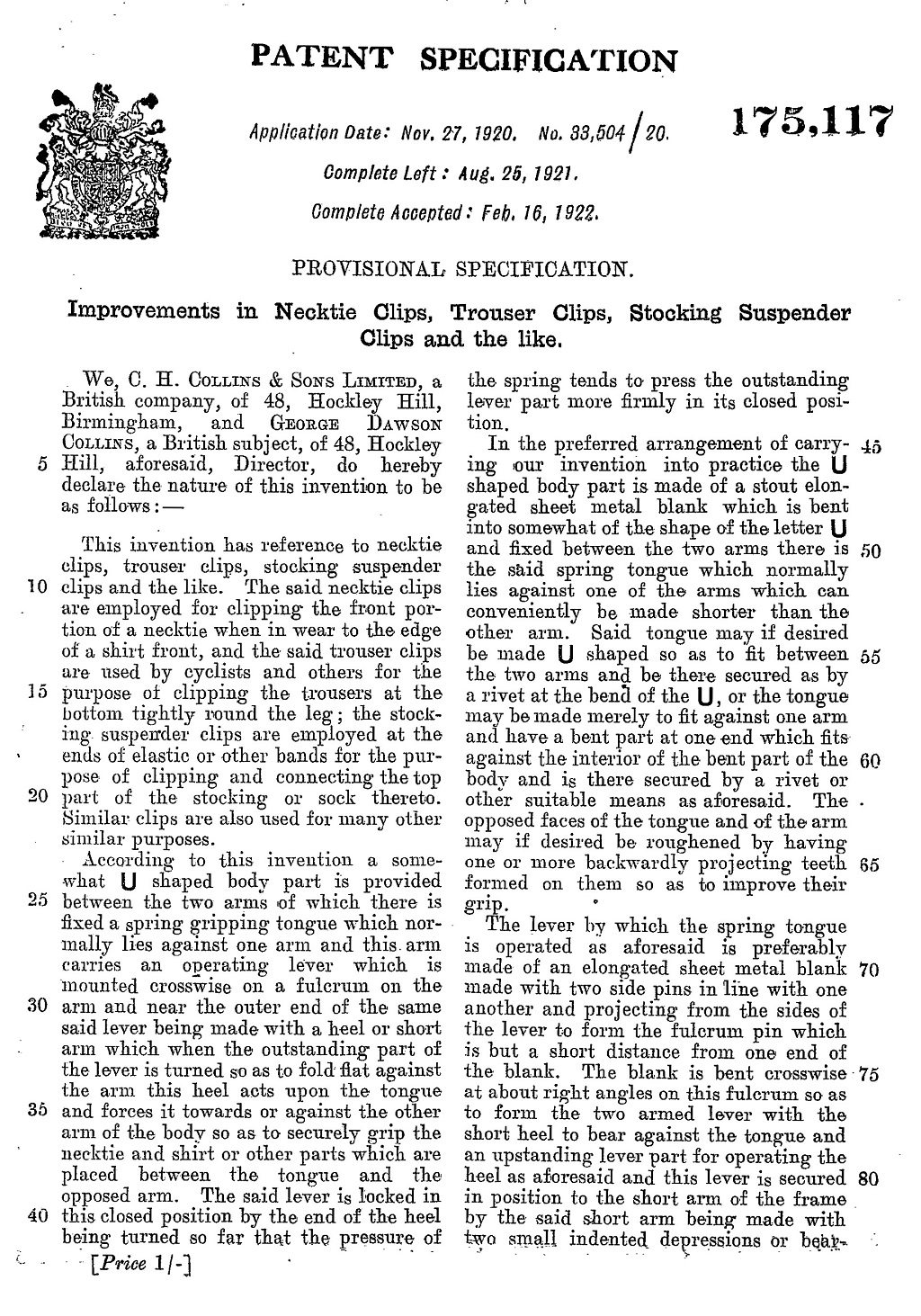 The catalogue entry is shown below: 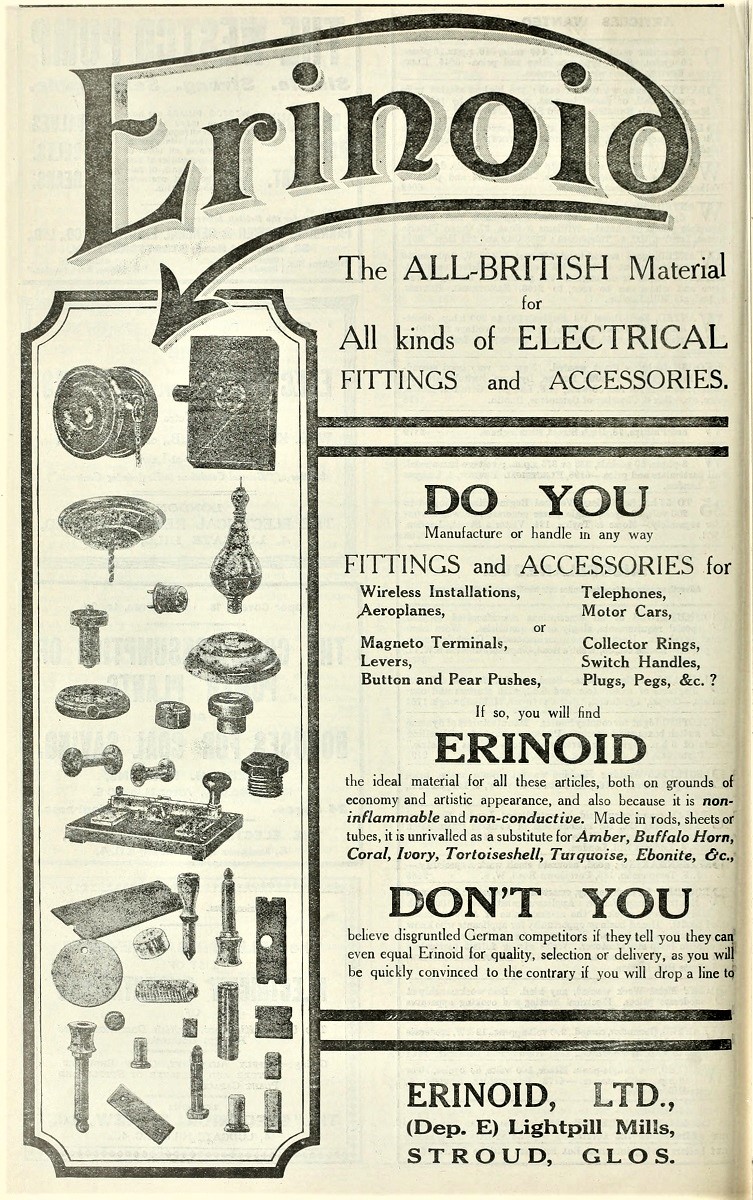 You may be interested in the Erinoid brand name.

The origin of this "new" plastic began when Galalithe was presented at the Paris Universal Exhibition in 1900. Galalithe was distributed by the Compagnie Française de Galalithe located near Paris. It is best described as a synthetic plastic which is created by the interaction of casein and formaldehyde.

Casein is a protein found in milk.

By 1913, thirty million litres of milk were used to produce Galalith in Germany alone.

In 1914, Syrolit Ltd gained the license for manufacture in Great Britain. The company was subsequently styled as Erinoid Ltd of Rodborough.

The factory was the main source of casein plastic in Great Britain. By 1914 the firm was manufacturing over 5 tons a week.

As you can see from the advertisement placed by Erinoid Ltd this product was a substitute for ivory, coral, amber, tortoiseshell, turquoise and ebonite (black vulcanised rubber) because it could be dyed and moulded.

The last paragraph gives an idea of the anti-German feelings the British expressed after World War I.

believe disgruntled German competitors if they tell you they can even equal Erinoid for quality, selection or delivery as you will be quickly convinced to the contrary if you drop a line to

On June 22 1922 Charles Ernest Collins' patent application for An Improved Fastener for Collars or other Articles of Dress was accepted. 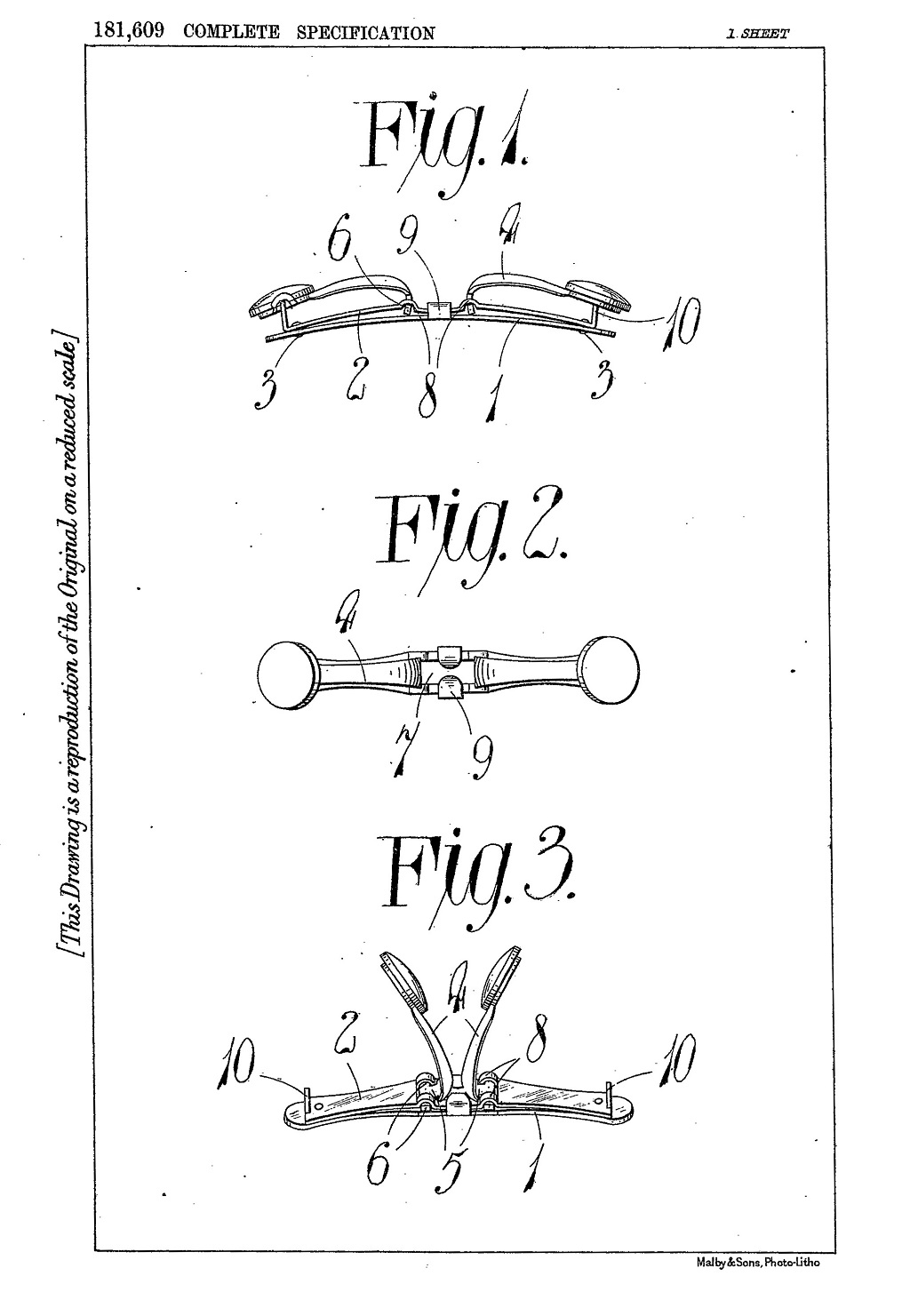 He described his invented as follows:

﻿Hitherto it has been the custom to manufacture these blades from metal...Such blades are liable to tarnish or carry dirt...
The object of the present invention is to provide a fan of improved and neater construction and in accordance therewith it is made of a material produced from a cellulose acetate base such as that sold under the registered name "Celastoid". 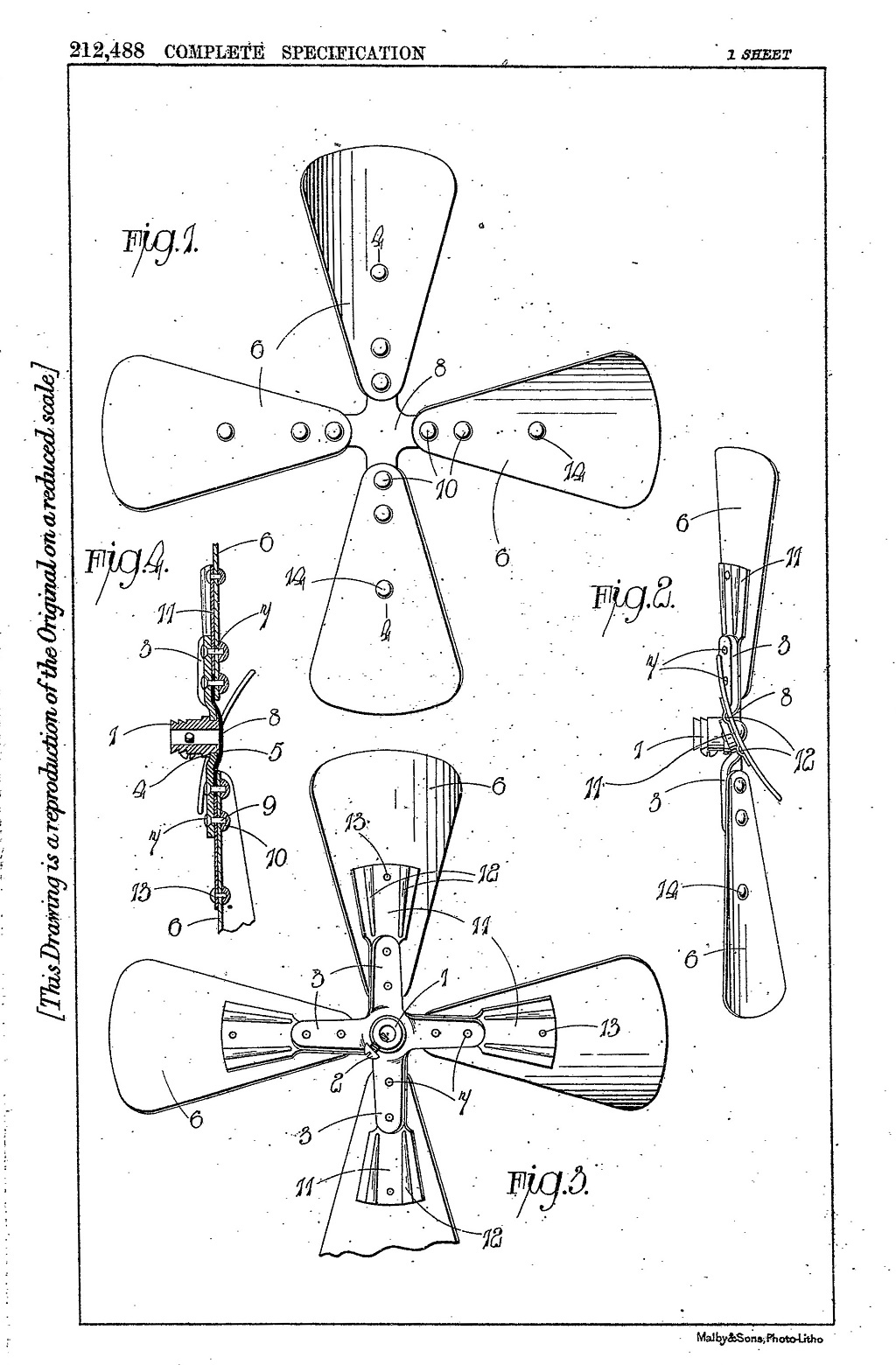 In 1924 Charles Ernest Collins was granted a patent for his design of rotary fan guard.

He describes his invention as follows:

One of the features of the present invention is to employ in the construction of the guard, celluloid or one of the similar materials sold under registered names as "celastoid" or "erinoid".

These materials can be obtained in various colours and comprising a highly polished surface of pleasant and cleanly appearance, similar to enamel, which can be cleaned without difficulty and which is not liable to accidental damage.

At the British industries Fair of 1929 they were listed as manufacturers of:

Many people have the feeling when they see Zenette brand vanities that the manufacturer must have been a first rate maker even before they research the history.

We can see that the Zenette brand compacts were crafted by a company with a history of making superb products. The splendid Zenette loose foundation compact shown above measures 9.5 cm diameter making it one of their largest vanities. The engraved design on the lid is a highly stylized depiction of an Art Deco sunrise. Some of the most beautiful Art Deco powder compacts made from non-precious metal were Zenette branded vanities. Some of the most sought-after Zenette brand powder compacts are those with hand painted enamel lids.

The compact shown above is so delightful! The lid and base are embellished with cream enamel. A hand painted rural scene graces the lid. A winding path leads to rustic buildings and a windmill. The compact has not been used with face powder. The original signed box, felt pouch, leatherette puff and sifter are present.  Measures 3 inches diameter. Weighs 80.5 grams.

Records show that the Company was still operating in the 1960s but by then the style of powder compact has changed to a ‘modern’ shape. No longer loose powder compacts.

﻿This article was updated by Danielle Boyd in September 2022.