Art Nouveau style was first seen in the early 1800s & was almost gone by the  time WWI began. Art Nouveau structures graced city spaces, public buildings & also the homes of the wealthy throughout Europe & America. It can be said to be a movement that touched every aspect of life. Instead of being confined to galleries this art is seen in everyday items & transformed them into art. From architecture to textiles, furniture, glassware, jewellery (jewelry), accessories, pottery & graphic design - the world influenced by Art Nouveau was a more beautiful place. 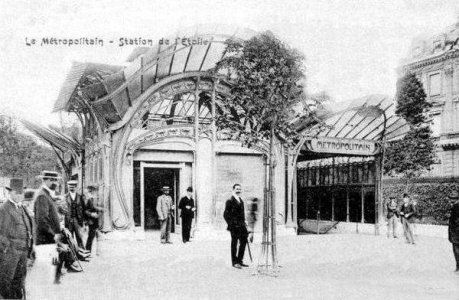 THE BEAUTY OF ART NOUVEAU IN THE URBAN LANDSCAPE

Hector Guimard (1867 - 1942) was the French architect who designed the Parisian Metro entrances. The photograph above shows the entrance of Station d'Etoile. Sadly this structure is no longer there but eighty eight of these structures remain. 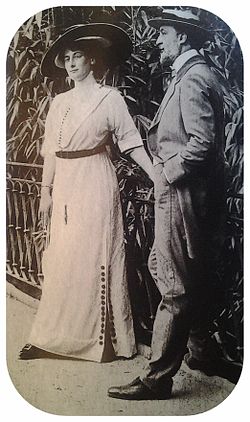 From 1820 to 1890 French silver was dominated by what can be described best as ‘eclecticism’ an infusion of influences of all the 19th century styles from the Neo-classical forms to the florid, extravagant styles which culminated in Art Nouveau Spectacular Naturalism, where natural forms & art make you almost forget the materials used, like the door at La Maison Lavirotte. It is as though the form becomes more important that the materials used. Art Nouveau captures one's attention like no other movement, not even Art Deco.

Jules Lavirotte (1864–1929) was the architect who designed La Maison Lavirotte.  This entrance shows the flamboyant, intricate nature of Art Nouveau. The most gorgeous fully hallmarked sterling silver Art Nouveau figural dog seal. This beautiful seal has the most ornate foliate motifs in relief. This well made antique is fashioned in such a way that every part is decorated, the surfaces rendered so that no finger-prints or marks show, except for the engraved stamp at the base which bears the initial L M in Gothic script.  Measures 7 cm & weighs 15 grams. More antique silver gifts.

After 1850 silversmiths began to collaborate with skilled enamel workers, sculptors & draughtsmen. These remarkable pieces reflect this highly productive period of creativity in France. The same can be said of English silversmiths also. An exquisite 9 ct gold Edwardian seed pearl and Aquamarine pendant. A glorious Art Nouveau piece which is fashioned into a heart shape. Tiny seed pearls adorn this pendant and they are set to form the middle of floral motifs and berries on the leaves. Traditionally Aquamarine is the birthstone for March. Vanities during this era were not designed to be portable. They were dressing table accessories. The lid of this beautiful Art Nouveau powder bowl is adorned with a clam-shell, scroll work, flora & foliate. This design continues through-out the whole antique - executed with perfect balance and symmetry. The lid and base have the centurion mark prefixed with the numeral 1 denoting .950 silver and the maker's mark. Measures 5 cm & weigh 26.9 grams.

Silver was decorated with allegorical & mythological figures. Well known proverbs were turned into objet d’art. For example La Fontaine's Le Renard et les Raisins...see the vesta case depicting the famous fable where the fox eyeing some grapes that he just can not manage to reach, states sullenly that they were too green anyway -  ‘ ILS SONT TROP VERT’. 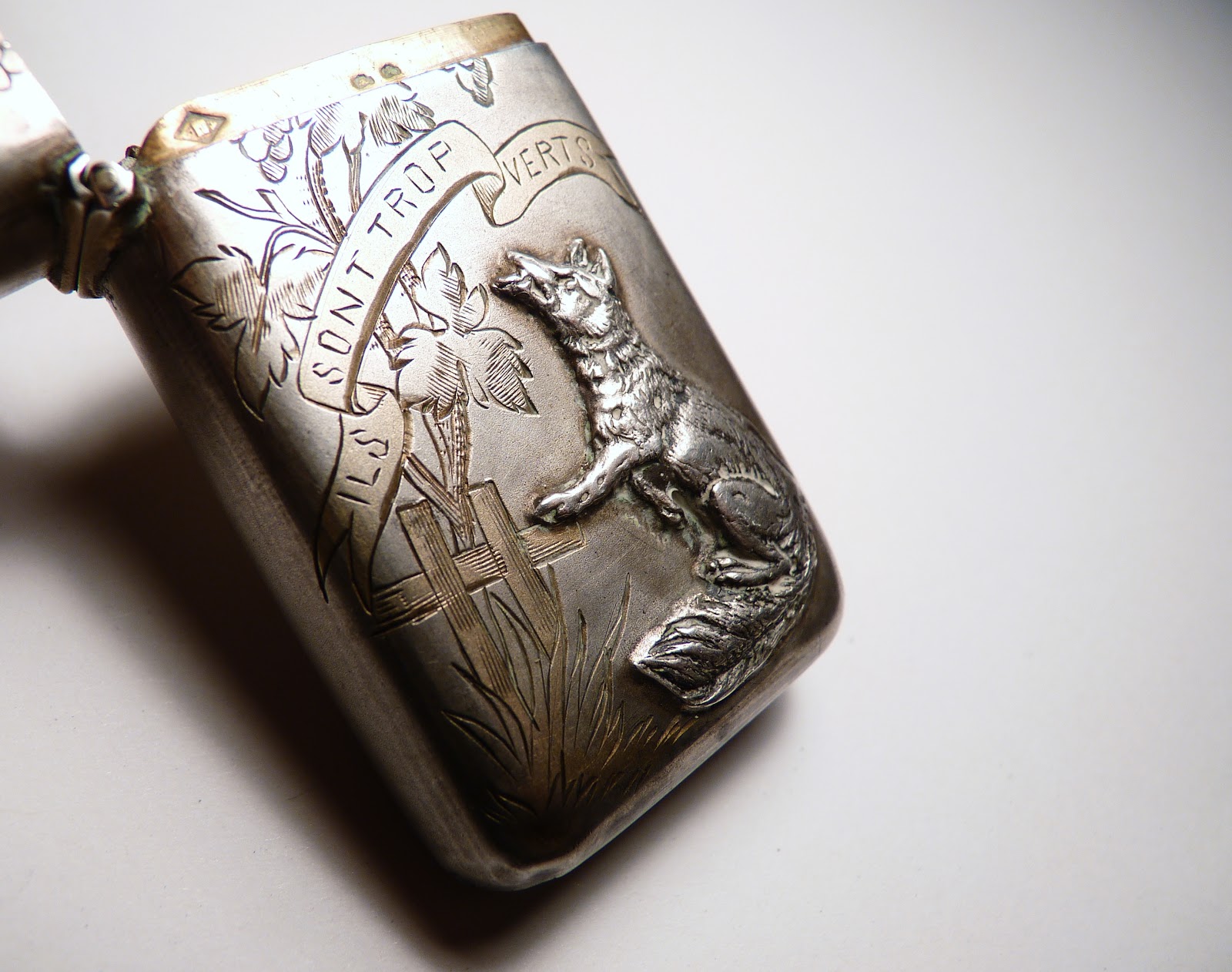 Silversmiths perfected their art to such a level where the materials became transformed. It is hard to comprehend until you see the door at La Maison Lavirotte. The style dominates so much that this is more art than it is an entrance to a building. We are in awe. The phrase Art Nouveau Spectacular Naturalism was used to sum this up.

The case below is so moulded that even the hinges, the edges, the area around the thumb catch was worked on to give the appearance that this was something natural. This is not just a case where an engraving has been worked on to the lid or base or both. The whole silver piece is transformed. 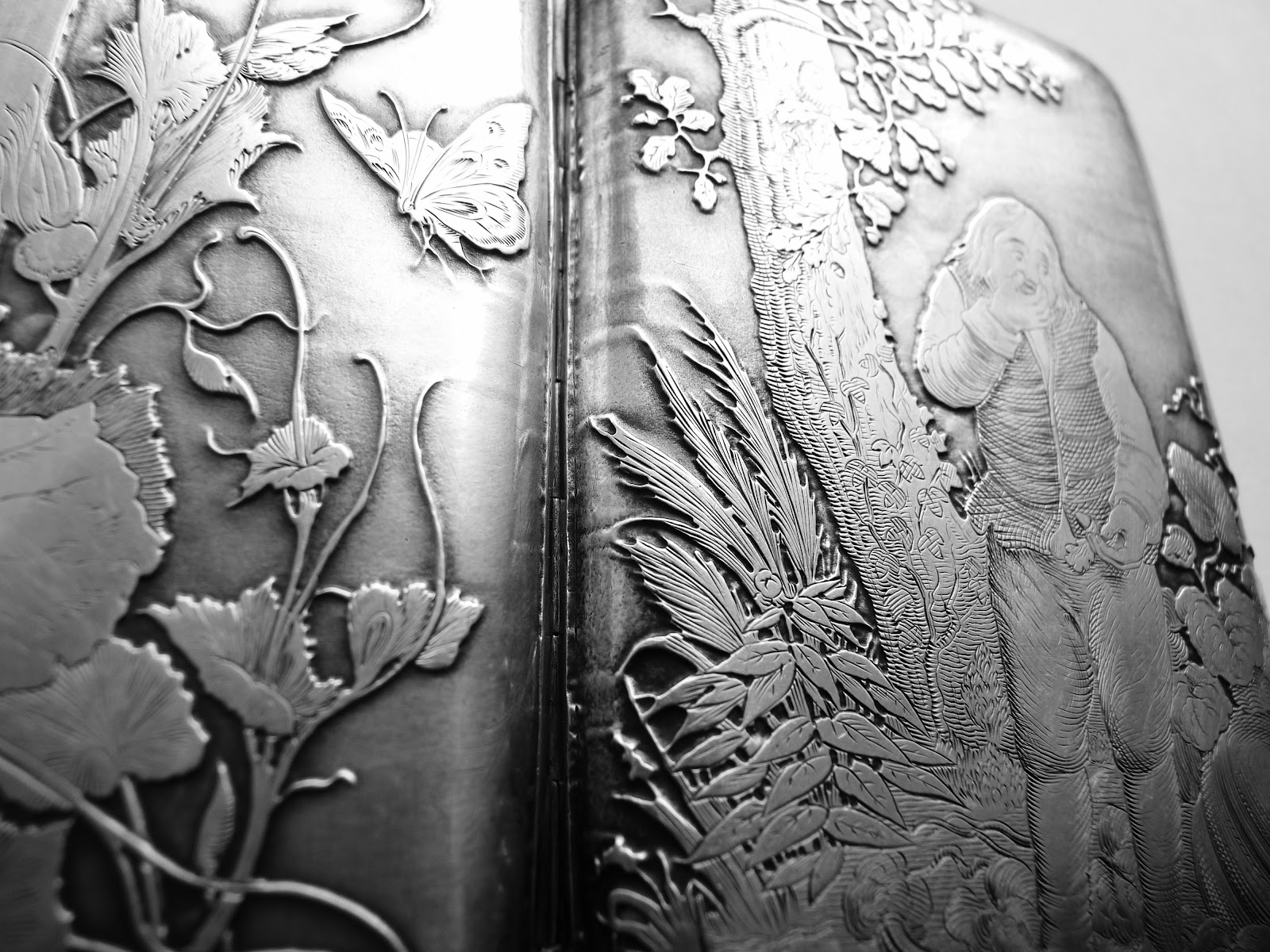 This Emile Grénet case was made in the 1800s. He was active in 1888 but very little is known about this maker & so far we have not been able to find any other pieces made by him. Surely there must be some but France suffered such great upheaval during both world wars & so many pieces of fine art disappeared & company records were reduced to dust.

The case is made in the great tradition of 19th century French silversmiths who are famed for their portrayal of fables, allegories & proverbs. To find a case like this illustrating probably the most well known proverb ‘Mighty oaks from little acorns grow’ is a dream come true & when you hold the case you realize that Emile Grénet has turned silver into nature - look at every edge, the area by the catch, the whole case has been transformed. Not for this silversmith a lid & base with engraved images but the whole external case is a fusion of nature with the high grade silver. This is one piece that should never be cleaned as it would ruin it. The light & shade finish off the case perfectly. A nineteenth century French sterling silver set of repoussage cigarette and vesta cases which are both adorned with manticores. This high quality set was made by the master silversmith Charles Murat. The choice of a mythical hybrid to adorn these cases makes them highly collectible. The description of the manticore varies from the era to the country of the story teller. Even today manticores feature in highly popular books and films, such as the Harry Potter series. Manticores have been described as having the head and body of a lion / lioness, the tongue and tail of a serpent or lizard and the wings of a dragon or bird. In this instance they have the head and body of a lioness, a lizard like tongue and tail and the wings of a bird. In some cases manticores have human heads. The fronts of these cases have splendid manticores looking very fierce indeed. Just below the creatures are shield like cartouches and the whole repoussage decoration is superb, ornate and complex. The backs of the cases have the same attention to detail and incorporated into the design emerging from the foliate, the head of the manticore - sleek, lion-like and fierce. Both cases are fully hallmarked and bear the maker's mark of Charles Murat. The cigarette case measures 8 cm x 6.3 cm & weighs 61.6 grams.The vesta case measures 4.6 cm x 3.2 cm & weighs 18.7 grams.

You can find out more on the history behind this revered style in our bespoke fact pacts that are supplied with every order from The Vintage Compact Shop - browse our range of  art nouveau antiques and accessories here.