The image above is the colour woodblock poster by Robert Bonfils for the Paris World Fair 1925 Exhibition.

Whilst the Art Deco style did not just appear in 1925 this is the date when the Art Deco Movement began to be celebrated at the Parisian World Fair known as Exposition Internationale des Arts Decoratifs.

This exhibition is probably the most famous World’s Fair to date. It ran from April to October 1925.

As a response to the austerity that was seen during WWI, the exhibits at the Exposition Internationale des Arts Decoratifs represented the luxury market.

A bold statement was being made. Paris was still the most stylish city in the world. The best perfumeries, the most stylish fashion and the most superbly wrought jewellery in the world was often French made. The confidence, flair and originality of the French designers was on display for the whole world to see.

Approximately sixteen million people from twenty countries visited to see what Style Moderne had to offer.

Fifteen thousand exhibitors showed off their creations to a beguiled audience.

The exhibition was so successful that the term Art Deco replaced Style Moderne, as the audience were naming the new style after the title of the exhibition. One of the main influences which led to the designs we describe as Art Deco was Cubism.

Cubism is one of the most influential movements of the twentieth century. The age of photography meant that artists needed to represent their art in a new radical way. Essentially, they could not make a picture perfect image, as the camera could & so they needed not only to be different but to be better than the camera. Better in the sense that they were more artistic, more abstract & more creative.

Cubism is also known as the first abstract style of painting. As early as 1907 Cubism is said to have begun. Perhaps the most famous Cubist painter was Picasso & it was his association with Braque that led to development of the Cubist Movement.

Both painters greatly admired the work of Cezanne. Cubist painters rejected the previously held desire that artists should copy nature & even that the traditional techniques held in such high regard since Michelangelo & Da Vinci of modelling, foreshortening & perspective should not be adhered to. The emphasis was on two dimensional images, geometric forms & even fractured images of humans which caused much disquiet at the time. Les Demoiselles d’Avignon was painted in 1907 by Picasso. Originally he gave the painting the title of The Brothel of Avignon but to avoid even more censure he changed its title to the ironic Les Demoiselles d’Avignon (Young Ladies of Avignon).  The large oil painting was shocking in the era of its crafting. Five nude ﻿ladies of the night appear amid geometrical shapes. Three of them stare disconcertingly at the onlooker.
The style of the painting has been described as primitive. No attempt has been made to create life-like female forms. The portrayal of the women is unappealing, flat and two-dimensional.
Cubist artists - Picasso, Braque, Robert and Sonia Delaunay among others crossed over to the world of theatre and designed sets for the Ballet Russes. These sets were enormously popular & influential in the world of jewellery, fashion and performance art. Picasso designed the set & also the costumes for the ballet, Parade which was choreographed by Leonide Massine who also was also the principal dancer. The ballet was composed in 1916 - 1917 for Sergei Diaghilev's Ballet Russes.

It was the first time Picasso had worked on a ballet production.

Some of Picasso's costumes were made from cardboard and the strange movements of the ballet dancers constrained by this unwieldy material was not what the audience expected to see.

At the premiere the audience was divided. Some of the audience loathed the production. They hissed and booed. Raucous behaviour and conflicting opinions almost caused a riot. Members of the audience who admired the ballet enthusiastically applauded in an attempt to drown out the boos.

While the Cubists caused some alarm, gold and silversmiths crafted what we consider to be iconic Art Deco pieces which can not be mistaken for any other era, although there are modern day imitations and later pieces which emulate this style.

Art Deco vanities and accessories which have full sets of British hallmarks can be authenticated and leave no room for error.

From 1842 it was illegal to sell imported gold or silver in Great Britain until it had been presented to be tested (assayed) at a British assay office. In 1867 the Foreign Mark was added.

The protection that this legislation offered is obvious.

So we see imports like the French Art Deco compact shown below given full sets of British hallmarks, which guarantee the purity of the precious metal and most importantly for those looking for genuine Art Deco antiques, a date hallmark.

In these instances the pieces will also bear the import hallmark. The ultra vanity shown above was imported into London in 1938 by Asprey & Co.

The image above shows the hallmarks which were struck at London Assay Office when this compact was assayed (tested for purity).

A & Co LTD for Asprey & Co. Limited. Then we see the London import hallmark. 925 denotes sterling silver. The letter c in this font within a chamfered square denotes 1938.

This gorgeous ultra vanity is the epitome of Art Deco extravagance & design! 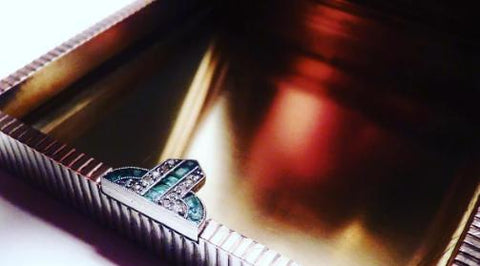 The centrepiece depicts the classic Art Deco motif, a rising sun emerging from behind a skyscraper. This forms a thumb catch which is set with table cut emeralds and diamonds. The beautiful lid has the most gorgeous and subtle cream guilloche enamel which is without losses or fading. The enamel is a beautiful and even colour.

Set atop, an impressive lapis lazuli cabochon. The beautiful down puff is pristine and unused. It has a celluloid ring attached to a blue silk backing.

The ancient crimson presentation case is in remarkably good condition.

An ancient piece of tissue paper is still inside the case. Measures almost 5 cm in diameter & weighs 51.3 grams. This exquisitely beautiful and stylish Art Deco vanity was made by Victor Mayer, who was a Faberge work-master. His firm was located in Pforzheim - the gateway to the Black Forest. This city is famous as a centre of jewellery making, so much so that it was known colloquially as Goldstadt ('Golden City').

The name of Victor Mayer is well known for the firm's luxurious ultra vanities, high end jewellery and the exceptionally skilled workmanship we can see in this adorable Art Deco vanity. 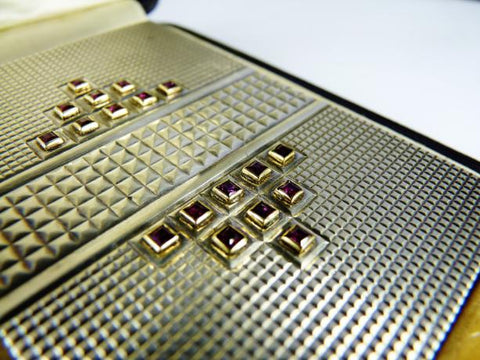 This is an exceptionally rare and most likely a unique Art Deco Le Roy et Fils sterling silver ruby & gold powder compact. The maker of this fabulous Art Deco compact needs no introduction.

However, they have such a wonderful history it is good to share it.

La Maison de Le Roy was founded in 1785 at Palais Royal and continued until the death of Charles-Louis Le Roy at Versailles in 1865. Le Roy et Fils premises can later be found at 13-15 Galerie Montpensier, Palais Royal, Paris when the Duc d'Orleans opened the Palais Royal gardens.

In 1885 the London retail outlet of Le Roy et Fils was situated at 57 Bond Street, having moved the short distance from Regent Street.

This firm was the only foreign clockmaker to hold a British Royal Warrant under Queen Victoria.

The master silversmith who made this vanity for Le Roy et Fils is Lucien Patouillard.

Some of the most captivating antiques are embellished with guilloche enamel. Geometric lathes were used by master jewellers to create splendid guilloche designs on precious metal.

The overlaying enamel shows the engraved design and as the light catches the antique the pattern appears to change.

These antiques have a captivating beauty. This slender and elegant accessory is embellished with enamel in the style of a sunburst with sun rays emanating from the central fine spiral. The enamel has the most lustrous sheen and a uniform colour. A striking fully hallmarked Art Deco sterling silver and blue guilloche enamel powder compact crafted by Adie Bros. in 1937. This splendid compact is embellished with enamel which depicts the classic Art Deco sunrise, the rays emanating from the sun in clam-shell like waves.

This article was updated by Danielle Boyd in March 2022.