This compact is widely admired as the epitome of Art Nouveau.  Made in 1925 the Djer Kiss "Kissing Fairies" powder compact is a silver plated compact duo. This case marked the end of the Rowland-Smith fairy theme vanities. The firm had made the decision to move to the more en vogue Art Deco theme. Almost as soon as this vanity was produced it was considered old fashioned, which is good news for collectors, as it had a relatively short production run. It is a highly collectible antique compact rouge. Superbly well made as you can feel by its weight - an exquisite antique compact! In fact the weight of the case, how much space it took up in the hand & the depth are factors that ensured this was not a popular case at the time, hence a short production run. Sleeker, slim line & light weight cases were the order of the day. The famous sight of the lid hardly needs any introduction - two fairies kissing surrounded by gorgeous Art Nouveau flowers. The area just above the thumb catch is signed "Djer Kiss". The silver plated interiors show the face powder compartment and the rouge compartment.

The lid opens to reveal the powder well & the original silver plated powder plate which is signed "POUDRE Djer Kiss KERKOFF".  Each compartment has its own puff. A brief history of Kerkoff:

This company was established by Monsieur Darthiailh in 1903 in Colombes, France. The well known Kerkoff salon was situated at Place de l’Opera. The manufacturing side of this company was a small concern in 1904, having only ten workers involved in this process. The Russian sounding name appears to be a marketing strategy to make this brand seem different from their French competitors. It was strange that at a time when Art Deco was en vogue to craft the decidedly Art Nouveau case. The flowing lines are obviously inspired by nature. At the height of the Art Nouveau era, which is said to have ended before World War I began, nature was considered to be the main source of inspiration for artists and artisans. Certainly the makers of this iconic vanity fall into both of the aforementioned categories. The influential British architect, Owen Jones published The Grammar of Ornament in 1856. He theorised that nature was the source of inspiration for the Art Nouveau Movement and that it was her influence which gave artists a huge desire to create works with sinuous lines, heavy ornamentation and free them from the constraints of critical expectations. Literally new art, Art Nouveau was a reaction to the mechanisation of the workplace and the imposition of rigid rules in art education. Both the Arts and Crafts and the Aesthetic movements emphasized a return to handmade items using traditional techniques,

The firm advertised itself as ‘perfumer to the czars, high-born ladies and kings’.  The management also knew that it was vital to find an American company to manage its affairs - it just had to tap into the wealthy American market. The New York company of Alfred H Smith was Kerkoff’s sole importer. Rowland H Smith (the founder’s son) took over this firm after his father’s death. It was he who had the vision to use large scale advertising to promote this brand. At first the advertisements would use imagery that would reinforce the company’s French connections.  French perfumers have widely been considered the best in the world for a long time & there was everything to be gained from this association. 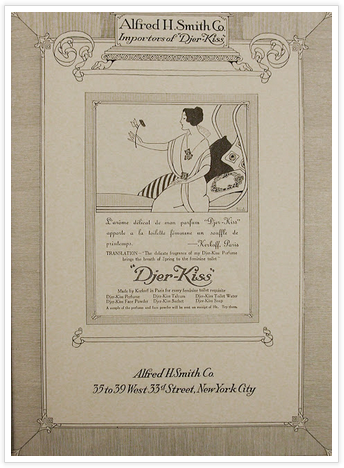 The image shows an advertisement placed in Vanity Fair in March 1914.

The advertising campaigns were so successful that by 1915 sales had grown so much that six times as many employees were needed to supply demand for perfume, soap, toilet water, talcum and dusting powders. Parfumerie Kerkoff relocated to larger premises at Place Garamont, Colombes in 1920.

The conventional advertising style shown above had little to separate it from all the other perfumers in America. However, from 1915 the fantastical imagery created by Willy Pogamy and Maxfield Parrish ensured that American women needed to have Djer Kiss toiletries in their homes.

The partnership of Alfred Smith in New York and Kerkoff in Paris worked well. Kerkoff made and supplied the perfume & and toiletries shipped them to New York. Once in New York the preparations were packaged in luxurious outer boxes with English writing. All of these preparations were made for the American market. Whether or not the formulations were any different than those created for French women is not known.

However, it was the American side of the business that created the now famous and highly desirable rouge and face powder containers adorned with the kissing fairies.

The imagery & the use of fairies in the advertisements was different from other brands & then there was the French connection too which could only help a cosmetic company. 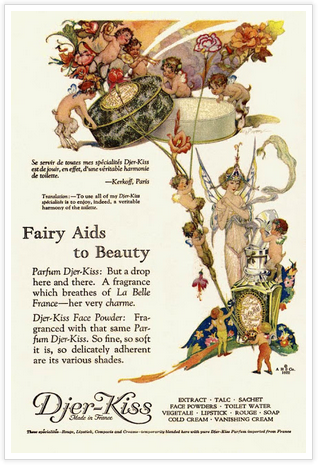 As well as the romantic fairy tale imagery used to promote these products the company would litter their advertisements with French - such a beautiful language and thus reinforced their French connection, which was entirely genuine, unlike many other American cosmetic companies.

From 1916 - 1925 this company used the fairy theme in much of their advertising. Rowland Smith employed the exceptional artists Willy Pogany and Maxfield Parrish.

The prolific Hungarian artist Vilmos András Pogány was born in Szeged, Hungary on August 24, 1882. It is not known exactly when he anglicised his name to Willy Pogany, or whether others did this for him. He was most noted for his illustrations in pen and ink.

His fantastical images of mythological creatures made him a sought-after illustrator of  books and advertisements. The influence of the Art Nouveau movement captured his imagination as did the natural world. His style is heavily influenced by the fairy tale genre and so he was a natural choice to illustrate the Djer Kiss advertisements. The meticulous and painstaking work was probably partly due to his training at technical school. He spent his early adult life attending art school. He travelled widely, staying in Munich, Paris and London. In 1914 he arrived in America and as his reputation had already been established he received many offers of work. 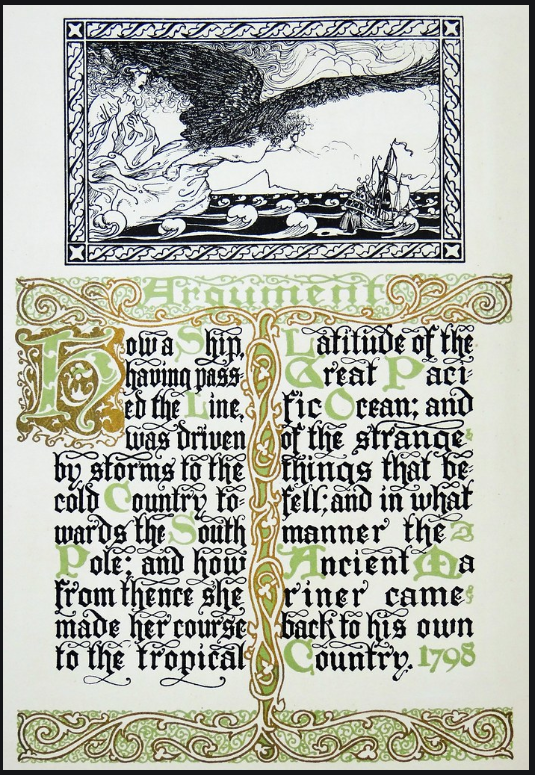 His superb work illustrating Samuel Taylor Coleridge’s classic The Rime Of The Ancient Mariner takes the form of a printed version of a medieval manuscript. 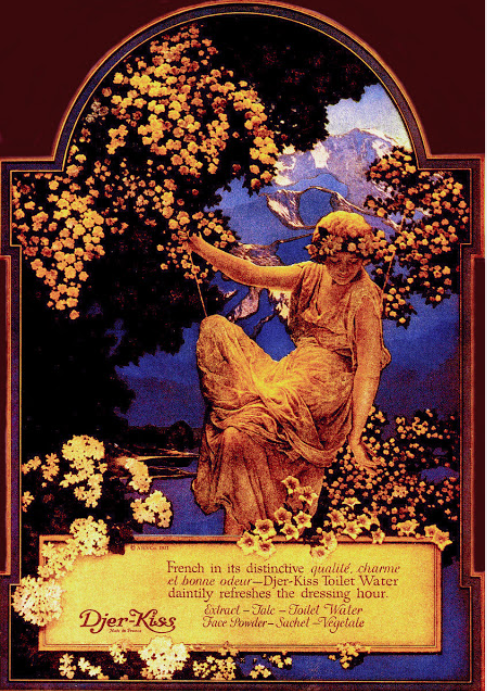 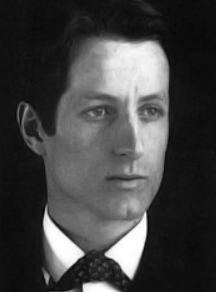 Maxfield Parrish was born on July 25 1870 in Philadelphia. His parents named him Frederick Parrish but he adopted his paternal grandmother’s maiden name as his professional name. His father, Stephen, was a painter and etcher. No doubt influenced by his father’s chosen work he was keen to learn the techniques needed to become a talented artist. His parents were pleased to nurture this ability and he toured Europe with them between 1884 and 1886. Parrish studied at the Paris school of  Dr. Kornemann.

His interests also included architecture and he attended the Haverford School and later studied architecture at Haverford College. From 1892 to 1895 he studied at the Pennsylvania Academy of the Fine Arts. Two of his tutors were the artists Robert Vonnoh and Thomas Anshutz. After his graduation he and his father shared a studio in Massachusetts.

As you can see from the Djer Kiss illustration Parrish had a penchant from vibrant and striking colour schemes. The colour Parrish blue is named after him. The colours are so vibrant because he would glaze the paintings. Layers of translucent glazes would be separated by a layer of varnish.

As well as the superb artistry of the advertisements the company sought new ways to ensure that loose face powder could be stored securely whilst being careful not to infringe on patents - the American perfume houses / manufacturers of vanities were extremely litigious. The powder plate is a vented plate with multiple slots.  Once the compact was turned upside down with the face powder puff pushed up to the openings loose powder would fall freely enough to coat the puff. Normally we expect to see the provision for the storage of twice as much face powder in a compact duo than rouge. But in this compact duo there is generous provision for rouge too. 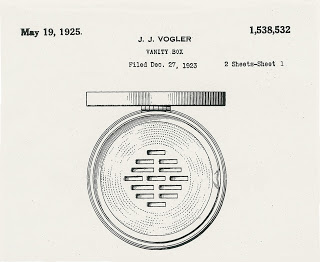 You can find out more about the history of this maker in our bespoke fact packs that are supplied with every order from The Vintage Compact Shop - shop Djer Kiss and Kerkoff vanities here.