(Abraham) Solomon Blanckensee was born in 1801 in Filehne, Wielen, Czarnków-Trzcianka County, Poland. His father was Levin Blanckensee & his mother Julia Joseph. He had three brothers, Issac, Myer & Moses. By the time of his death in 1864 he was a highly successful jeweller. He died in the county of Warwickshire, Great Britain.

In 1826, Solomon Blanckensee founded a jewellery concern based in Bristol, England. The business proved to be highly successful and as time went by it acquired a number of other prominent jewellery firms. The size of the business and quality of the products meant that it had few others considered to be its equals.

Solomon relocated to Birmingham.  The business premises was a house located at Great Charles Street. The house was also the family dwelling. At this time it was usual and prudent for the owner to live on the premises or in an attached dwelling. After the death of Solomon in 1864, two of his sons, Abraham & Aaron, were in control of all aspects of the family’s jewellery trade. In 1873 Abraham died leaving Aaron and also a younger brother, Julius, to run the concern.

The family were well known for being successful jewellers and sometimes this fame attracted attention they would rather not have.

Despite there being much harsher penalties for those committing crimes in Victorian England the Blackensee family were the victims of robberies on a number of occasions.

A daring robbery from a London railway station of £6,000 worth of jewels is reported. It was made at King's Cross Station of the Great Northern Railway. The victim is Mr. Blanckensee, of Messrs. S. Blanckensee and Son, Ltd., wholesale manufacturing jewellers, of Frederick-street, Great Hampton-street, Birmingham, manufacturing jewellers, with a London office at Ely-place, Holborn. Mr. Harry Blanckensee is well known on the road as a traveller in high-class goods. He arrived from Hull about 8 o'clock on Friday night and handed in at a temporary cloakroom close by the entrance to the Tube Railway at King's Cross Station a brass-bound leather case containing his samples, valued at £6,000.

On Monday a case containing jewellery valued at £1,000 was abstracted from the trap of a Mr. Blankensee, principal of a Birmingham firm of manufacturing jewellers, which was standing outside a shop in Tottenham Court-road, London. The coachman stood at the horse's head, and a policeman was standing within a few yards of the end of the vehicle at the time. In 1885 the brothers purchased the well known Emanuel & Davis jewellery makers. In the same year they moved into a charming stuccoed two storey building in Birmingham’s jewellery quarter (14/15 Frederick Street) which contained workshops which were described as a ﻿manufactory in the advertising literature. This building was also known as Sovereign Hall. The family firm occupied this building from 1881 - 1945.

Today the premises is a Grade II listed building. The Italianate decorative moulded capped plinths, wreath ornamentation and bearded head keystones set above the lintels mark this out as a place where a highly successful business traded in luxurious gold, silver and silver plate wares. In 1887 Soloman’s son, Aaron, became the Managing Director. The partnership was incorporated as a limited company, 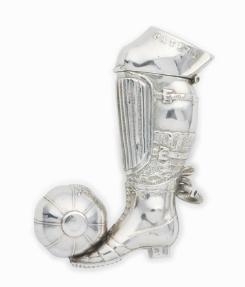 More family members joined the company and their dedication ensured that this booming business could take over other rivals. By 1887 the company known as Simeon Greenberg had become part of the Blanckensee group. Sidney Blanckensee & Son (Aaron’s son & grandson) were involved in the manufacture of brooches and jewellery. The range would include all manner of items expected to be seen in a jeweller’s shop, except for clocks, watches and flatware. 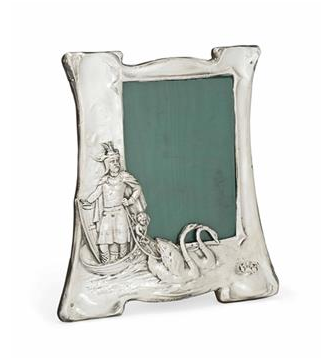 A sterling silver Birmingham assayed Art Nouveau picture frame with a die-stamped decoration - a warrior standing in a boat drawn by a pair of swans. As you would expect the easel back is constructed from wood.  Measures 9 inches.

The advertisements below show a small selection of the Blanckensee crafted wares. The advertisement shown above lists LIONEL BLANCKENSEE Manufacturer Of ELECTROPLATE IN EVERY VARIETY. The works and showrooms are located at 18 - 19 Northwood Street, Birmingham and 115 Holborn (near Hatton Garden) London EC.

Top left to right - a tea and coffee set, fine cup (trophy), another trophy cup available in all sizes. Fourth row down - a China Salad, with helpers Crown Derby Decoration, a Glass Jelly, Oak Salad (bowl) ﻿with helpers﻿ and a ﻿Sugar Basket all colours.

Fifth row down - a Salad Bowl with helpers, Oak Dish Butter ﻿and a glass butter dish. THE MARK OF LIONEL BLANCKENSEE

Lionel Blanckensee was the son of Abraham Solomon Blanckensee. He followed in his father's footsteps, opening a business located on Buckingham Street, Birmingham. Some time after this, his firm occupied premises at 18 & 19 Northwood Street, an address which is also located in the Birmingham jewellery quarter. We think that the building on Northwood Street may no longer exist, as this area has been subject to redevelopment and we can not find it. London showrooms were located at various addresses in Holborn from 1893 - 1906. The advertisements shown above list the London address as 118 Holborn (near HATTON Garden), LONDON, E.C.  Lionel Blanckensee died in January 1933. By the time of the deaths of Aaron (1902) & Julius (1912) other businesses had been purchased, namely Isaac Silverstone & Nathan & Hayes. Sidney made the decision that the company should also focus on manufacturing silver, as well as trading as jewellers, gold and silversmiths.

At this time their manufacturing premises were located at Great Hampton Street. A magnificent locket which was crafted by the well known maker S Blanckensee & Son in the Edwardian era. This delightful piece dates to 1908 and it was assayed* (tested for purity*) at Chester Assay Office. One side of the locket is embellished with ferns and acanthus leaves. The other side is decorated with ivy leaves. Ferns symbolise sincerity. Acanthus leaves represent the desire for everlasting life. Ivy leaves represent everlasting love, deep friendship and fidelity. Both sides are fitted with black moire. The splendid locket shown above was assayed at Birmingham in 1915. Ornate engravings grace both sides of this fully hallmarked 9ct rose gold locket. Around a central circular cartouche florid acanthus and ivy leaves form a mesmerizingly beautiful composition. The back bears a full set of hallmarks neatly disguised within ivy and acanthus leaves.

Lockets are probably the most personal items of jewellery, as they carry the portraits of our loved ones. The engravings seen on antique lockets are deeply symbolic. The interior contains the original hand tinted portraits, both frames and both protective covers for the portraits. The locket opens and closes perfectly.

As well as the crafting of first rate hallmarked gold lockets the firm sought to reap the benefits of the wedding ring trade, which has always been a huge market. The acquisition of the Albion Chain Co. in 1916 was a superb tactic to corner the market. Representatives would travel to each county in England promoting the firm’s wares.

By the early 1920s in the region of 600 people were dependent on the company for a living. During this decade Stokes & Ireland & A & J Zimmerman were absorbed into the business.

By 1936 numbers 16 and 49 Frederick Street were also known as business premises of the firm, as was the address of 19 - 39 Regent Place, Birmingham.

The company acquired J W Tiptaft Ltd., who were the foremost manufacturer of sporting trophies in England. This acquisition allowed the firm to benefit from retaining the skilled artisans and knowledgeable workers needed to dominate this trade.

The tagline Everything in silver & plate was very appropriate. This highly successful manufacturing silversmiths made just about everything you would expect to find made out of silver and also high quality gold jewellery.

In 1947 the firm was a listed exhibitor at the British Industries Fair.

S.B & S.LD INTO A RECTANGLE