During 1846 and 1847 Hilliard & Thomason oversaw the construction of  their purpose-built manufactory & quarters on Spencer Street. In this era it was usual for the factory premises to be located near or attached to the owner's dwelling. The residential premises of the founder was attached to the right of the manufactory. The imposing manufactory, sited at 1-2 Spencer Street, Hockley, Birmingham, no longer exists. It has been replaced by buildings which look as though they were constructed from breeze blocks. The factory was located near the intersection of Hall Street and Warstone Lane, a well known part of the jewellery quarter.

The image above depicts the view of The Crystal Palace from Knightsbridge Road - copyright Read & Co. Engravers & Printers

In 1851 the firm was listed as an exhibitor at The Grand International Exhibition which was held at The Crystal Palace as makers of: The delightful vinaigrette shown above is thought to depict Windsor Castle.

Hilliard & Thomason also exhibited at The International Exhibition of 1862. Hilliard & Thomason are particularly well known for their novelty nutmeg graters. The term ﻿novelty﻿ in this context is used to describe something that has the appearance of something else. For example the wonderful strawberry shown above. This maker also crafted nutmeg graters which resembled walnuts, clam-shells and melons.

While edible strawberries grew wild and cultivated in Victorian England they were a seasonal plant. Many town dwellers could not afford to buy them. Melons were classed as foreign green fruit. This exotic import was beyond the reach of most Victorians. Fashioning nutmeg graters that had the appearance of melons was the height of luxury.

The construction of many of Hilliard & Thomason graters was so much more than a functional kitchen implement. Often the exterior case was crafted to delight and amaze all who set eyes on these wonderful silver-gilt creations. The grater was usually hidden inside these delightful hallmarked silver pieces and it was made from steel, which is ideal for such a hard spice.  The steel was gilded to make it aesthetically pleasing and also to match the vermeil interior of these luxurious little toys. 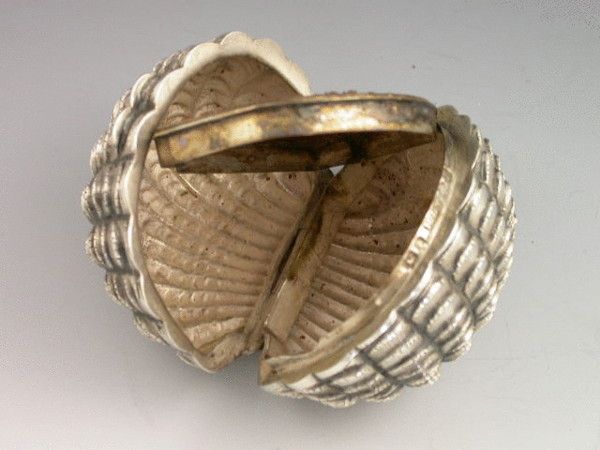 Spices have a long history of being highly prized. In the middle ages Europeans believed that nutmeg possessed such powerful healing properties it could ward off the bubonic plague. This is one reason why this spice was valued so highly.  Its rarity and the fact that the trees and their produce were jealously guarded also added to its high value. For some time the location of the original nutmeg trees was known only to a few traders. Early in the sixteenth century the Portuguese set up bases on the Spice Islands, which is where all the nutmeg in the world was growing at that time. The Dutch, British and Spanish vied with the Portuguese to control the spice trade. By 1663 The Dutch East India Company succeeded in such a stranglehold on the supply of nutmeg and cloves that they could dictate the price. In 1769 the French managed to smuggle nutmeg trees and seeds from the heavily guarded territory which the Dutch East India Company ruled with a rod of iron. The monopoly had been broken.

However, nutmeg was still extremely valuable and in the eighteenth and nineteenth centuries owning nutmeg was a display of wealth and naturally the owners of this spice desired the most luxurious nutmeg graters. The botanical drawing by Carl Ludwig Blume shows Myristica fragrans, an evergreen tree which is indigenous to the ﻿Spice Islands from which the spices nutmeg and mace are harvested. This tree can now be found in the Caribbean and Asia, as well as its original location in the ﻿Spice Islands (The southern Banda Islands). ﻿

Hilliard & Thomason are famed throughout the world for their superbly crafted nutmeg graters and exquisitely beautiful silver pieces. The Exhibition of Local Manufactures And Natural History at Bingley Hall, Birmingham took place from August 26th to October 2nd 1886. The company was a listed exhibitor.

In 1890 William Edwin Thomason and J. J. Richardson joined the firm which was then styled as John Thomason & Nephews.

However, the firm continued to trade in the ownership of his descendants as J. Thomason & Nephews until 1906. After the retirement of W. E. Thomason in 1910 the company went into voluntary liquidation. The machinery, goodwill and stock were purchased by E. J. Haseler and N. Haseler. The firm relocated to 29 Warstone Lane, Birmingham seen here on the right. The building still houses a jewellery concern today.