﻿A superb example of guilloche enamel. This exceptionally beautiful sterling silver and enamel loose powder compact is embellished with two birds perched amidst hanging branches and blossom. The enamel is fashioned into the classic Art Deco sunrise. A further enamel border is adorned with elegant swags.

The first skilled artisans said to have decorated fine jewellery with guilloche enamel were working in the mid 18th century. The methods and tools that were used have changed very little over the centuries. The patterns favoured then were still being reproduced in the 1950s.

Guilloche is a decorative technique in which artisans use lathes, often referred to as rose engines. These machines have been in existence for hundreds of years and even those used by jewellers in the twenty-first century were made as long ago as the middle of the nineteenth century.

This is an old art, steeped in history which appeals to many traditionalists.  The term guilloché is French. The technique is said to be named after Monsieur Guillot an engineer who invented a machine which was used to create repetitive finely engraved designs. This statement has not been verified.

Intricate and precise patterns were carved into materials such as stone, metals and precious metals.

At one time this art was entirely hand crafted. The introduction of the rose engine allowed for greater accuracy and productivity. More complex designs were introduced with the mechanisation of this process.

Typically the designs included patterns with overlap, spirals and many classic compositions which today would be described as quintessentially Art Deco. Although many patterns can be traced back to ancient times.  For example the Mediaeval Cosmatesque stone inlay designs are also now known as guilloche. These patterns resemble the designs the rose engines produced centuries later. The term Cosmatesque derives from the Cosmati family who are renown for their geometric inlay stonework which can be seen in buildings that date to the Mediaeval era. During this time their skills were much in demand to adorn churches in Rome. Four generations of the Cosmati family excelled in their craft and the inlay techniques became known as Cosmati or Cosmatesque. 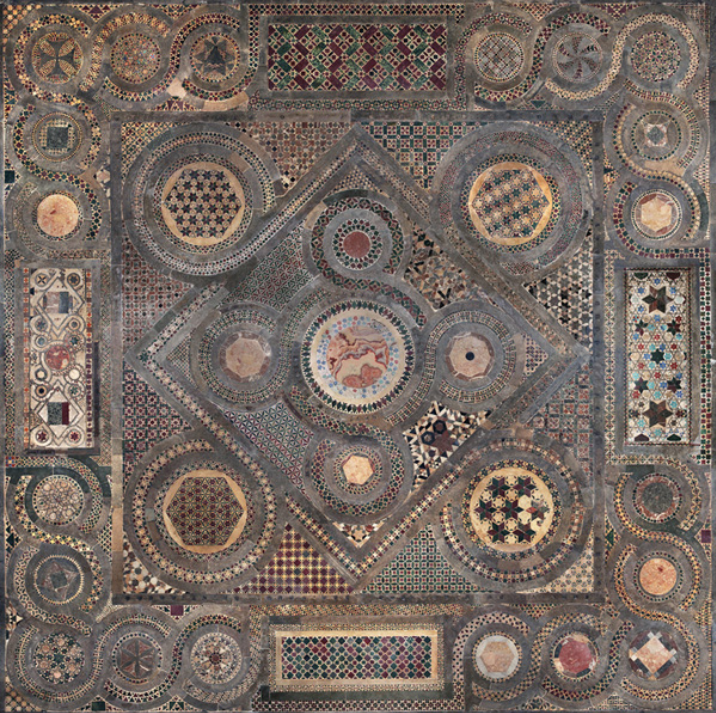 Admiration for their superb craftsmanship spread all over the world. Inspiring other artisans, sculptors and architects.

Westminster Abbey has the most impressive Cosmatesque high altar floor.

This mediaeval tile mosaic floor has recently been restored. A grant from the Getty Foundation helped to get this project underway. The process took two years.

The central point of this fabulous floor is where the throne is placed during the coronation of a monarch.

Since the coronation of William the Conqueror, on Christmas Day 1066, every monarch (except for Edward V and Edward VIII who were never crowned) has been crowned here.

As far back as the sixteenth and seventeenth centuries engine turning machines were used to carve wood and ivory.  By the eighteenth century gold and silver were embellished with guilloche engravings.

Peter Carl Faberge is probably the most famous jeweller who perfected the art of guilloche enamel.

The process involves the guilloche engraving of the fabulous creation which was followed by the application of translucent enamel to the piece. 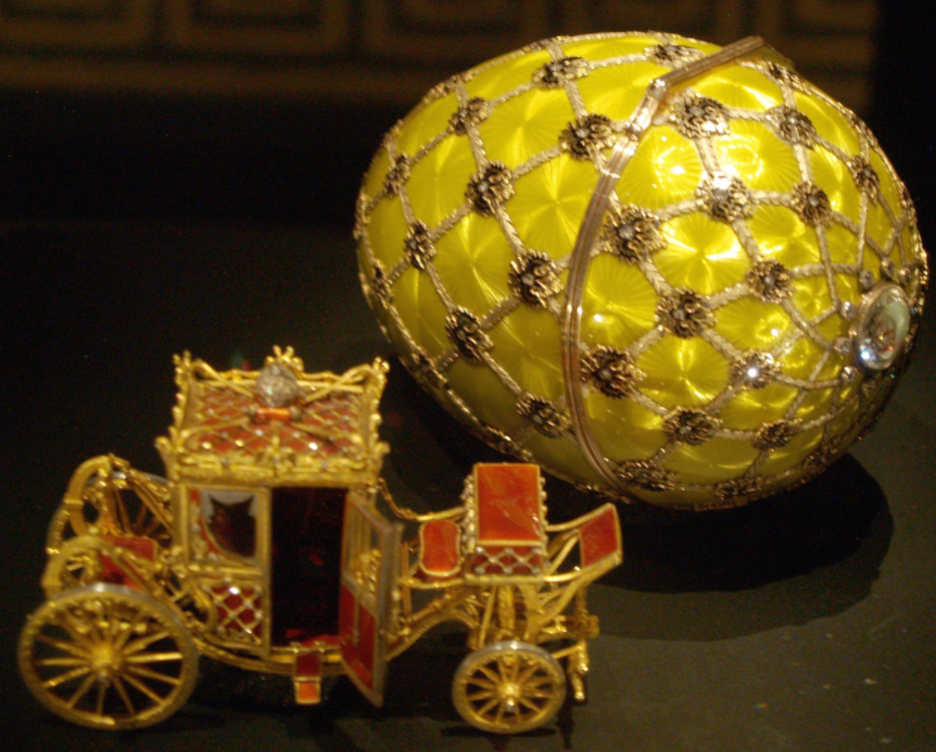 The Imperial Coronation egg was made to commemorate Tsarina, Empress Alexandra Fyodorovna in 1897. Faberge ateliers, Mikhail Perkhin and Henrik Wigstrom under the supervision of Peter Carl Faberge created this wonderful enamelled egg, which can be seen on display at the Winter Palace in St Petersburg from time to time. Today it is privately owned by Russian businessman, Viktor Vekselberg.

By the twentieth century the demand for luxury accessories adorned with guilloche enamel ensured that this ancient craft endured. 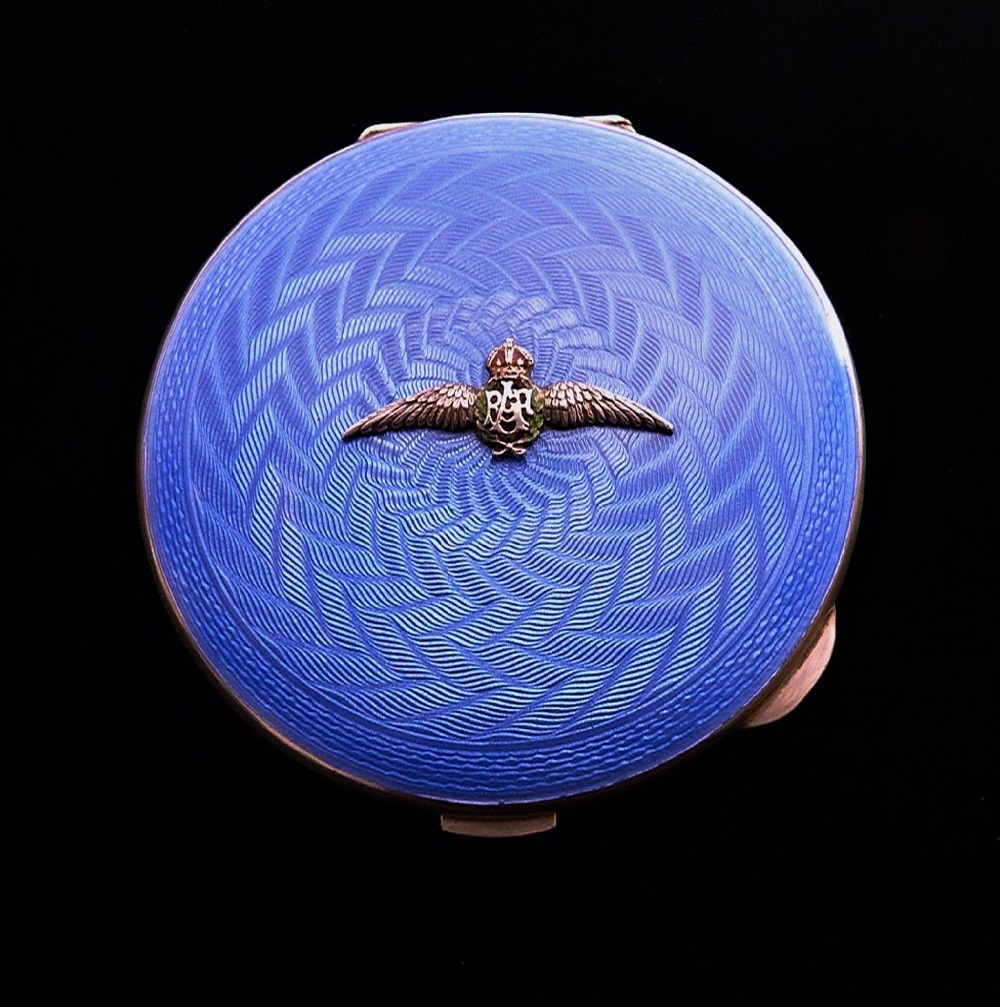 A fabulous World War II sterling silver and blue guilloche enamel powder compact which was crafted by John William Barrett and assayed at Birmingham in D Day year (1944). A wonderful piece of British history. The city of Birmingham suffered from heavy bombing by the German Luftwaffe which began on August 9 1940. Birmingham was the third most bombed English city in WWII. The Luftwaffe would continue to blitz Birmingham until April 23 1943.

To think that silversmiths would continue to craft exquisite vanities for the wives of our brave RAF pilots during this time and in the following years is uplifting and shows their spirit and determination. This piece is exceptionally good and it is obvious that this vanity has been cherished and treated with great respect.

The enamel is most appropriately Air Force Blue, which is described as a medium shade of the colour azure.....like the sky on a clear summer's day. The guilloche enamel is in a style which mirrors the chevrons seen on the RAF uniforms. Set atop the lid is a sterling silver enamelled pilot's flying badge.

Such an evocative antique which embodies the spirit, determination and pride so prevalent in mid-century Britain.

The RAF vanity shown above demonstrates precise geometric shapes that emphasise not only the guilloche enamel but also the form of the vanity and the choice of chevron design is so appropriate. STERLING SILVER & GUILLOCHE ENAMEL MAKEUP COMPACT
Perhaps some of the most appealing accessories adorned with guilloche enamel are those embellished with floral motifs and scenes from the natural world. For many centuries flowers have been used in art to convey meanings.
Naturally the forget-me-not is depicted. Historically these flowers symbolise remembrance for loved ones present and also for the dearly departed. A less well known belief is that they also are a lucky talisman offering good luck and protection and are powerful enough to protect humans from witches. 1959 HENRY CLIFFORD DAVIS SILVER & ENAMEL COMPACT MIRROR.
Roses have been associated with love and romance and so they are an appropriate embellishment for high quality luxury accessories for ladies. RARE J GLOSTER SILVER & GUILLOCHE ENAMEL COMPACT
An exceptionally beautiful vintage sterling silver and guilloche enamel powder compact. The delightful enamel is embellished with two birds perched amidst hanging branches and blossom. The enamel is fashioned into the classic Art Deco sunrise. A further enamel border is adorned with elegant swags.
Hallmarked silver cases and powder compacts decorated with birds and animals are rare and extremely hard to find in good condition.
Crafting accessories adorned with guilloche engraving is very time consuming. These pieces are so appealing as the refraction of light draws the eye to the object to study it in all its glory and every time the object is moved the light dances on its form as it does so. The rose engines are fitted with rosettes or pattern bars. Slight adjustments to the machines allow the craftsman to produce hundreds of different designs. However, many highly regarded jewellers and watchmakers will only produce the eight classic patterns. They believe that this ancient art should be reproduced in the styles that have been produced for centuries without any improvisation. The emphasis is on perfection.

The highly complex designs make guilloche patterns ideal for use on bank notes to prevent forgeries.

Swiss watchmakers have been renowned throughout the world for centuries. Their guilloche enamel timepieces are exquisitely beautiful. 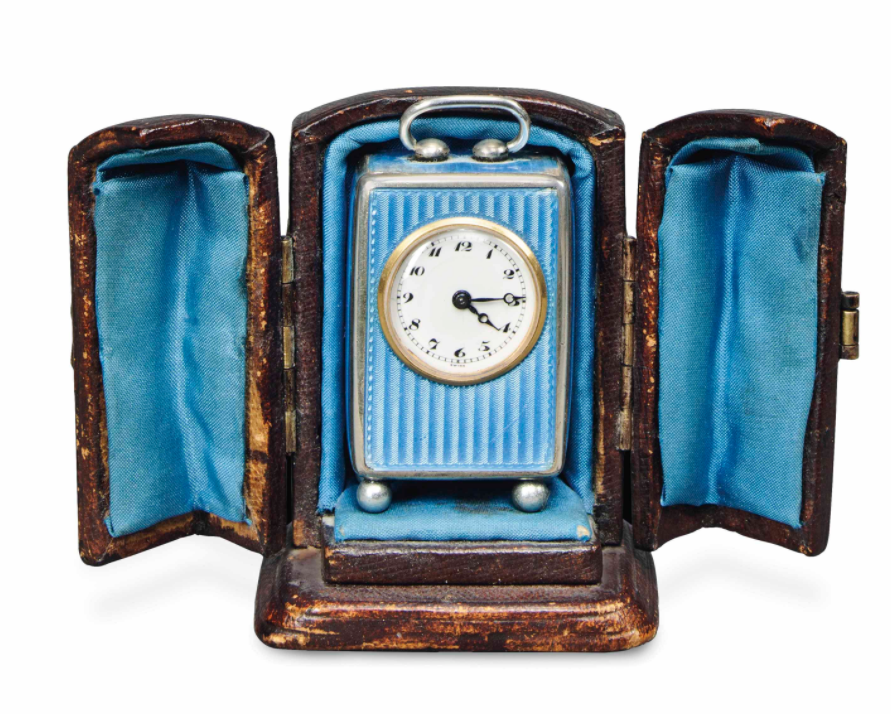