The silversmiths J. Gloster Ltd were highly regarded for both their sterling silver & silver plated items from the Victorian era until the 1960s. The company was founded in 1880. Their premises was situated at Lion Silver Works, Hockley Hill in Birmingham, England.  They were a British Industries Fair Listed Exhibitor in 1929.

The catalogue lists the firm as:

J Gloster hallmarked silver cases decorated with bright-cut engraving are highly collectible. The term bright cut refers to a type of decorative engraving used on metal objects, often precious metals. Decorative designs are created by making a series of short cuts into the metal, using a polished engraving tool that causes the exposed surfaces to reflect light and give an impression of brightness.

It was most frequently used in England and countries influenced by the work of English silversmiths during the late 18th and 19th century. It is sometimes used with diamond settings to make the stones appear larger. The directors of the firm and their employees worked hard to invent devices and manufacturing methods which would improve the durability of their products. By 1914 the firm employed approximately one hundred people. In 1924 the firm's patent for 'Improvements in and relating to cigarette and like cases' was accepted and published. The metal retaining device was to secure cigarettes in place. The address listed on the document is 33 Hockley Hill, Birmingham. The applicants were J Gloster Ltd and Ernest Gloster.

On the document the firm makes the following claims:

The retaining means commonly employed in cigarette and like cases comprises a strip of elastic fabric, the ends of which are secured within slotted flanges or loops on the interior edges of the case, but such fabric strips quickly perish and stretch, particularly in hot climates. Another form of retaining means comprises a rigid metal strip or finger which is pivoted at one end to the side of the case and is controlled by a spring which causes it normally to press upon the cigarettes or the like, the strip being turned about its pivot to allow the cigarettes to be inserted. The strip, however, when the case is new, is apt to exert undue pressure on the cigarettes, while after a prolonged period of use the spring loses its elasticity and ceases to be effective.
The object of our invention is to provide an improved retaining means which is free from these disadvantages and which is simple and efficient in use and will not deteriorate in any climate. On 25 November 1924  Joseph Gloster Ltd and Leonard James Gloster applied to patent their invention which relates to the application of decorative mounts to jewellery, clocks, watches, handbags, ornamental boxes and cases.

Our invention comprises a method of manufacturing a - - decorative material fulfilling these objects by impressing a pattern on a surface of a translucent and flexible sheet and applying to --the impressed surface a thin coating of metal or other suitable substance. Preferably the sheet is of celluloid and the 1.1 metal backing is sprayed thereon so as to obtain an even and thin coating. 45 The other face of the sheet, which in the finished article is the outer face, is preferably highly polished.

Like most of the most well known silversmiths of the era J Gloster Ltd. also crafted high quality condiment sets. On a patent application, dated 30 November, 1928, the address is listed as ﻿Lion Silver Works, Hockley Hill, Birmingham. The firm and Leonard James Gloster cited the following:

Gloster, Ltd., J., and Gloster, L. J. Nov. 30, 1928. Condiment receptacles;  drinking - vessels; sugar basins.-Hollow articles of the kind commonly spun from sheet silver or other metal, such as salt-cellars, cups, sugar basins, vases and the like, are made by covering with a thin sheet of the metal a moulding of the required shape made from a plastic material of the formaldehyde condensation product type. The moulding may be formed with ribs, grooves, or similar ornamentation, which will be re-produced in the finished article. Fig. 2 shows the construction of a salt-cellar. The moulded inner part a, formed with a lip or mouth rim b and a base ring c, is closely covered, by spinning, with a covering d of thin sheet-silver as far as the underside of the lip, a separate flanged ring e of silver being spun over the lip portion to complete the covering. The articles may be composed of two or more mouldings fitted together and covered by sheet metal applied in one or more pieces. Specification 20162/05 is referred to.

﻿J Gloster sterling silver and guilloche enamel vanities are highly prized today, as they were back in the day. We are sure that you are aware of the terms guilloche & guilloche enamel. The machines used to produce the guilloche patterns are called geometric lathes or more commonly known as rose engines. It is stated that a French engineer Monsieur Guillot invented the “rose engine” which allowed greater precision than hand engraving.

In days gone by luxury accessories made from precious and base metals were engraved with the most intricate guilloche patterns which served not only to beautify the items but also to render the surfaces so that fingerprints could not be seen. When guilloche enamel catches the light the patterns appear to change. The best guilloche enamel has a mesmerising beauty. 
The eye-catching and very beautiful enamel is the classic Art Deco sunburst design. In the middle is a bordered square adorned with scrolls. The enamel is as radiant as it was back in the day. 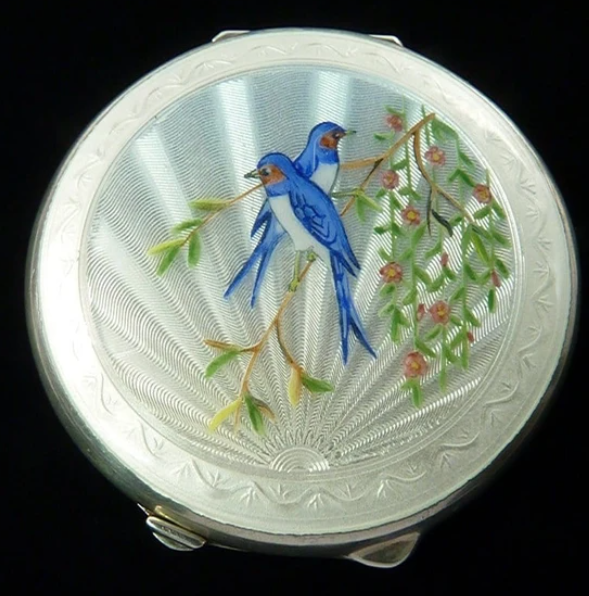 Vanities depicting birds have been popular since the mid-twentieth century. The exceptionally beautiful sterling silver and guilloche enamel powder compact shown above is embellished with two birds perched amidst hanging branches and blossom. The enamel is fashioned into the classic Art Deco sunrise. A further enamel border is adorned with elegant swags. Assayed at Birmingham in 1947.