William Colgate founded his business in New York. The warehouse premises were located at 6 Dutch Street, NY. The firm was involved in the manufacturing of soap and candles. It may seem a little strange to us but their range of soap included brown soap, as well as pale coloured soap. They also offered fancy soaps which were fashioned into unusual shapes.

William Colgate formed a partnership with Francis Smith. The firm then became known as Smith and Colgate.

Colgate bought out Francis Smith’s share of the business and went into partnership with his brother, Bowles Colgate until 1844. The business was now styled as William Colgate & Company. The company was now the largest manufacturer of perfumes in America.

The advertising copy welcomes orders which are needed urgently. Even clients requiring goods for export were promised -

ORDERS FOR EXPORTATION EXECUTED ON THE SHORTEST NOTICE.

The highest price given for TALLOW.

You may wonder if 21st century cosmetic companies still use animal fat. The answer is “yes”. Vegan soaps are made by Beauty Without Cruelty and a few other brands but many soaps contain animal fat. You may like to  research whether your favourite soap comprises animal products and whether the company uses animals for research.

By 1847 the company was so successful that a much larger factory was required and so the soap-making plant was moved to New Jersey. 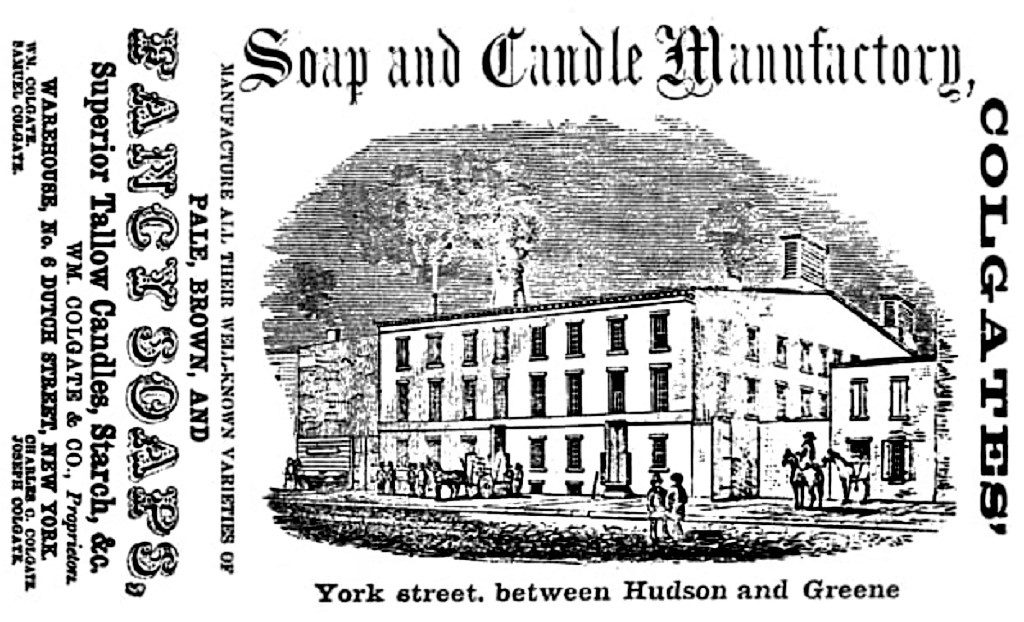 Advertisements are such a good source of information.

The one above lists the proprietors as -

On March 25 1857 William Colgate passed away. He was laid to rest in Greenwood Cemetery, Brooklyn, New York. 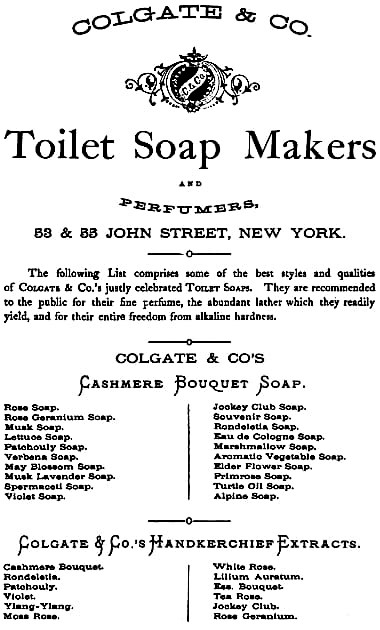 The stylish advertisement shown above lists imaginatively fragranced soaps and handkerchief extracts. During this and the previous centuries it was customary for gloves and handkerchiefs to be dabbed in perfume.

As you can see from the advertisements the Colgate range included much more than soap and candles. Toothpaste and talcum powder were also manufactured by this firm which also formulated perfumes to scent their cosmetics, especially their soap. Perfumes were also sold in luxurious scent bottles.

By the 1900s Colgate dominated the American cosmetics market. 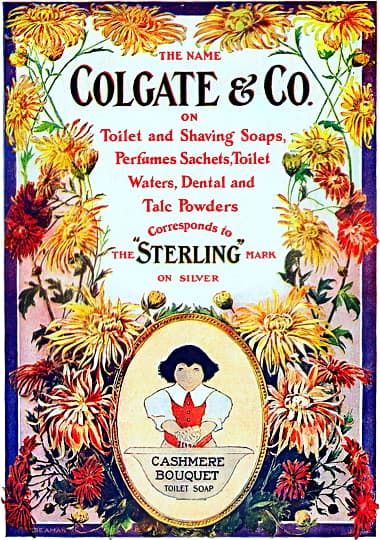 A COLOURFUL ADVERTISEMENT C.1901
1902
In this year George J. Adams invented a bottle closure for Colgate & Co. of the type which we see fitted in our talcum powder containers.
A summary of this invention follows:

Be it known that I, GEORGE J. ADAMS, a citizen of the United States, and a resident of the city of New York, borough of Brooklyn, in the county of Kings and State of New York, have invented a new and Improved Bottle-Closure, of which the following is a full, complete and exact description.

This invention relates to improvements in closures or stoppers for packages containing toilet powder or the like and of that class having two parts provided with outlet-openings and arranged to rotate one part relatively to the other, so as to cause a register of the openings or to close the same; and the object is to provide a closure of this type in which the two perforated parts will be automatically held close together at all times, thus preventing an accumulation of powder between the parts. 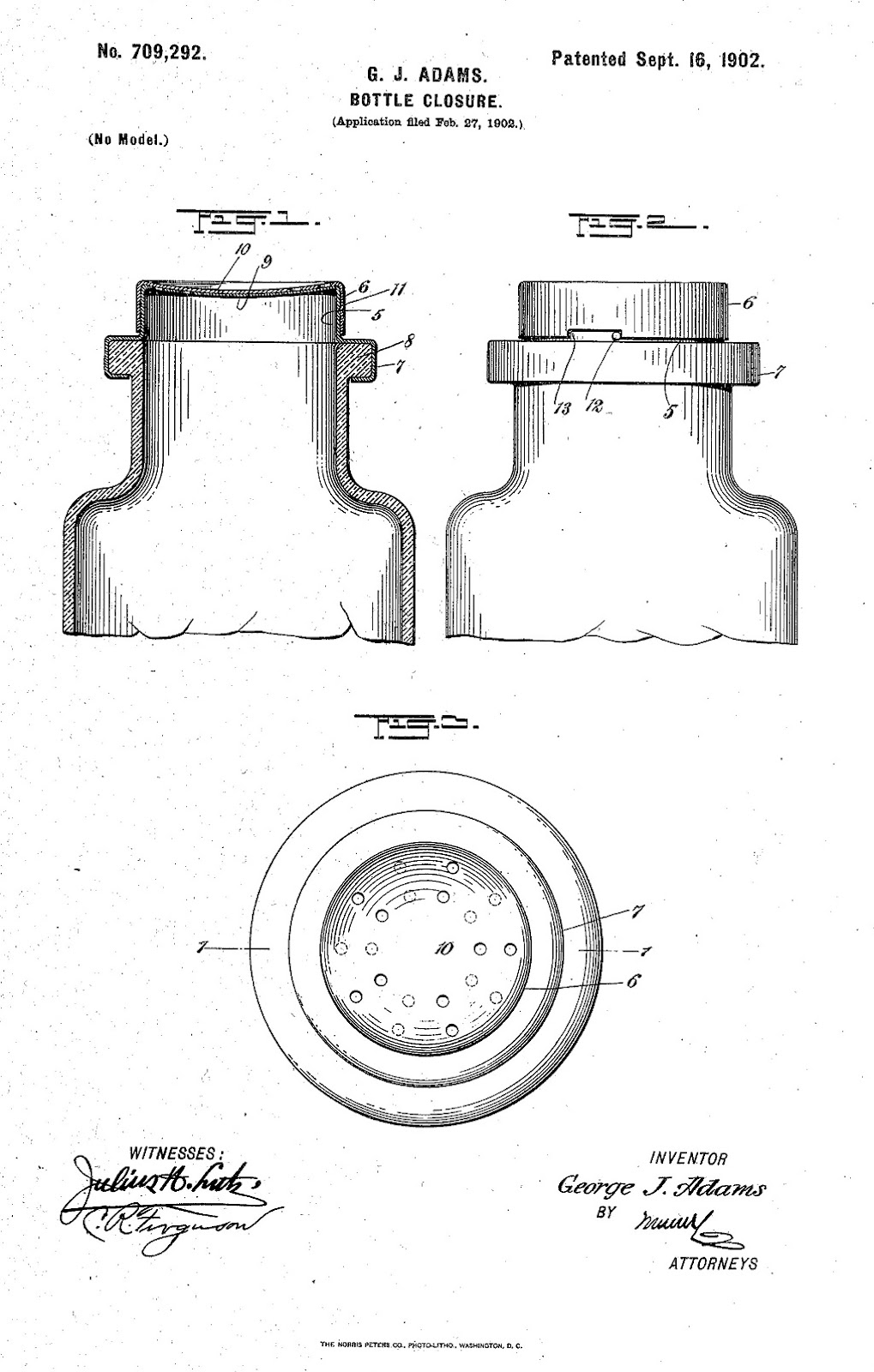 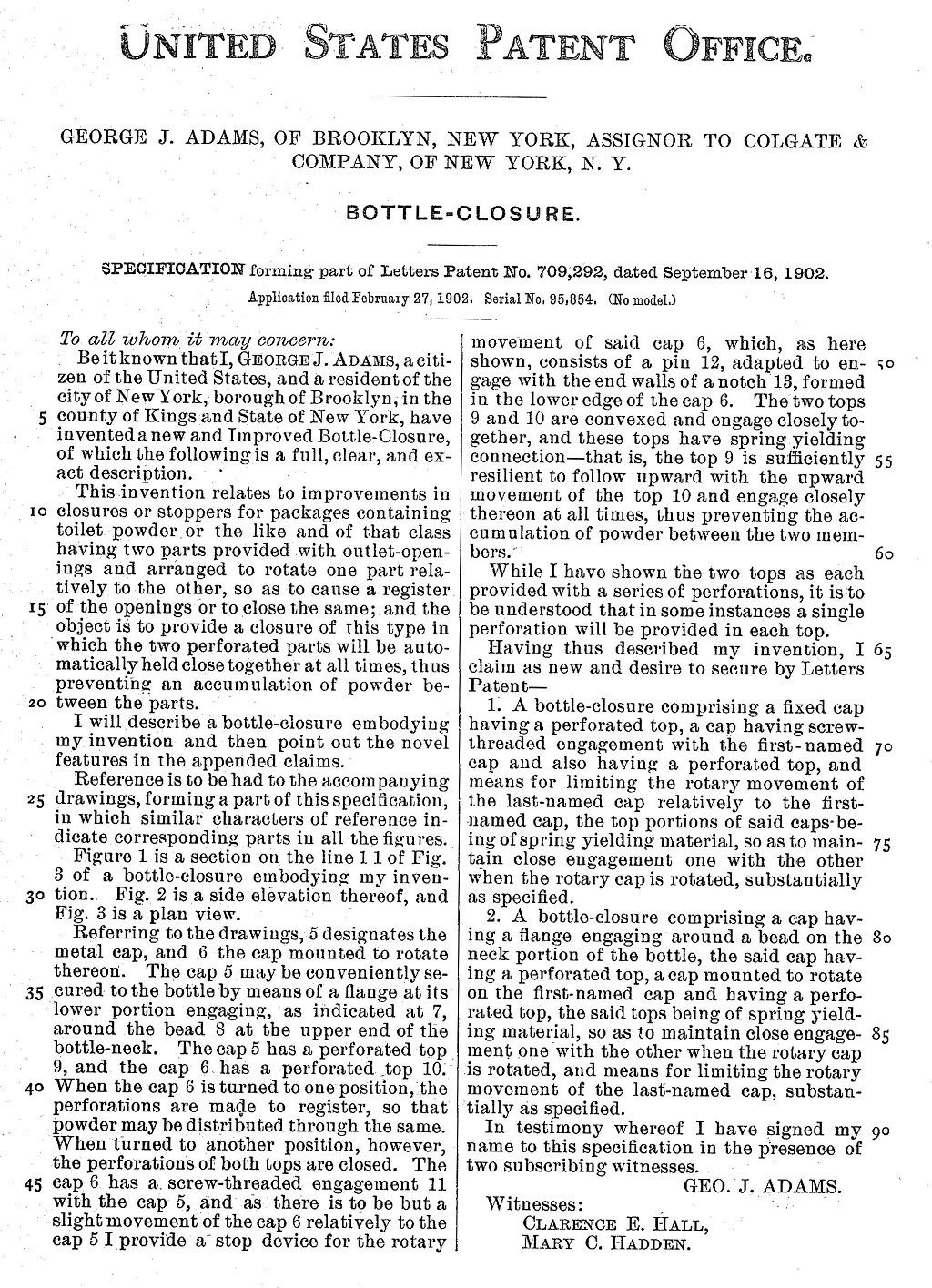 PATENT 709292
﻿1906
In this year a patent application for a cake of soap was accepted.
Henry G. Pepino, describes his invention as:
﻿My invention relates to soap for saving purposes, and particularly to the form of the cake specifically for use in a shaving mug. 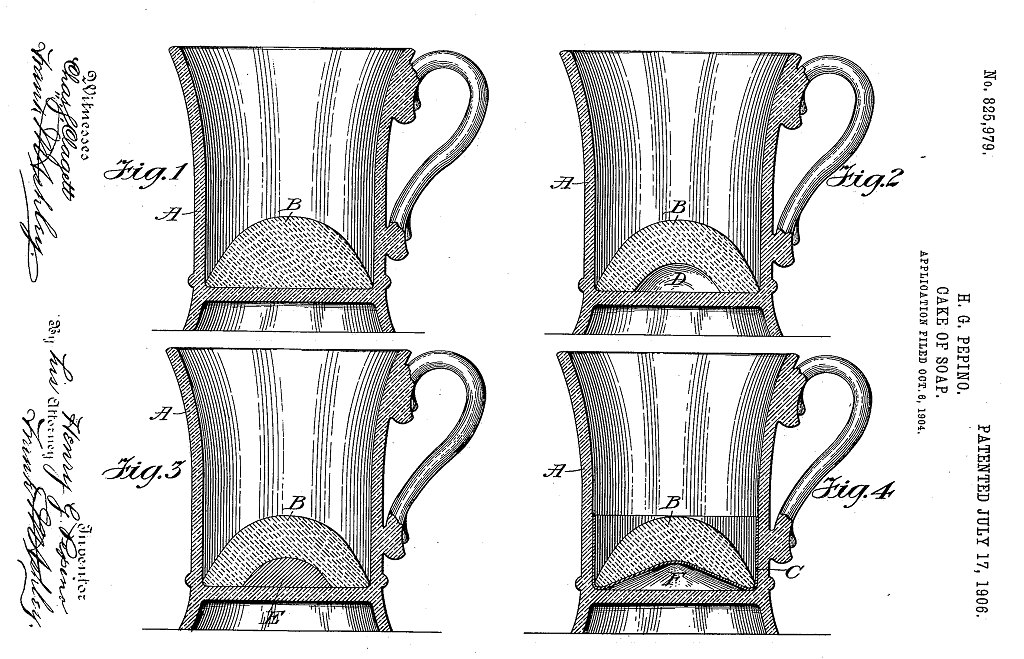 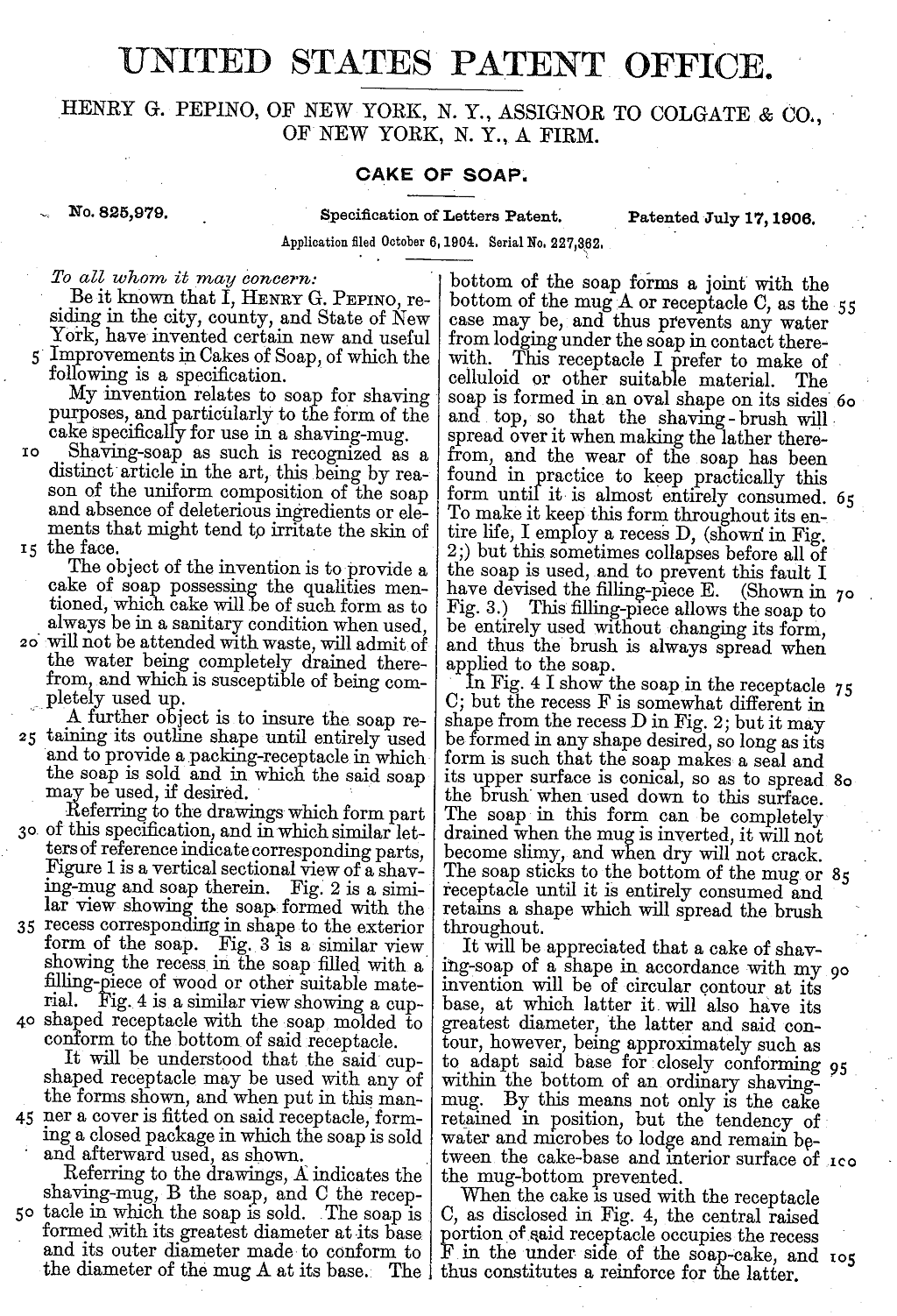 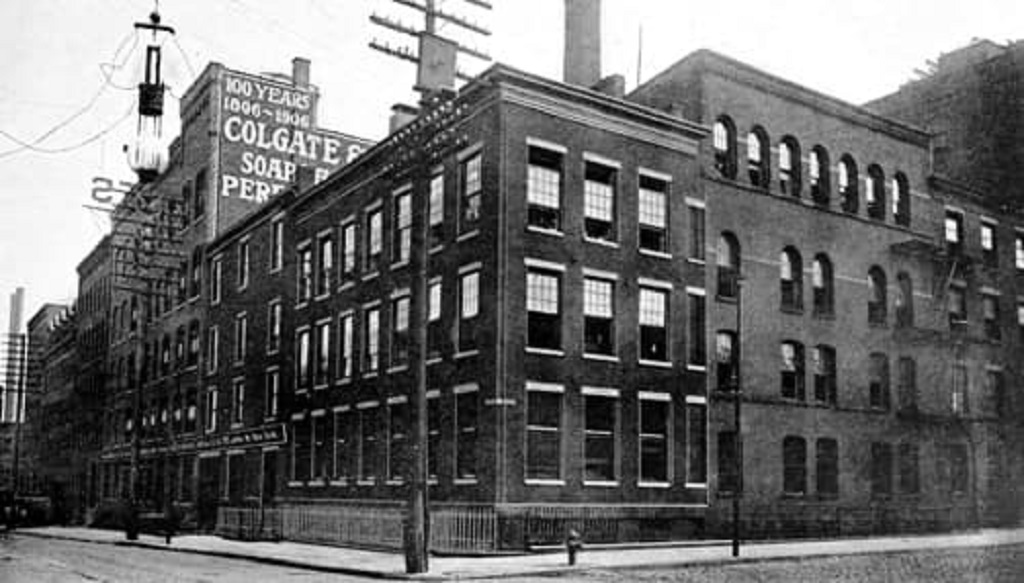 On ﻿September 24 1924 the patent application submitted by Samuel Bayard Colgate and Martin Hill Ittner, assignors to Colgate & Company, was accepted.

Their description of the invention:

This invention relates to collapsible tubes commonly used for containing plastic or pasty materials which are to be discharged in small quantities from time to time.

More specifically the invention is directed to the provision of a tube with a discharge nozzle which has an improved closure cap by which the orifice may be sealed so as to prevent contamination or accidental loss of the contents. 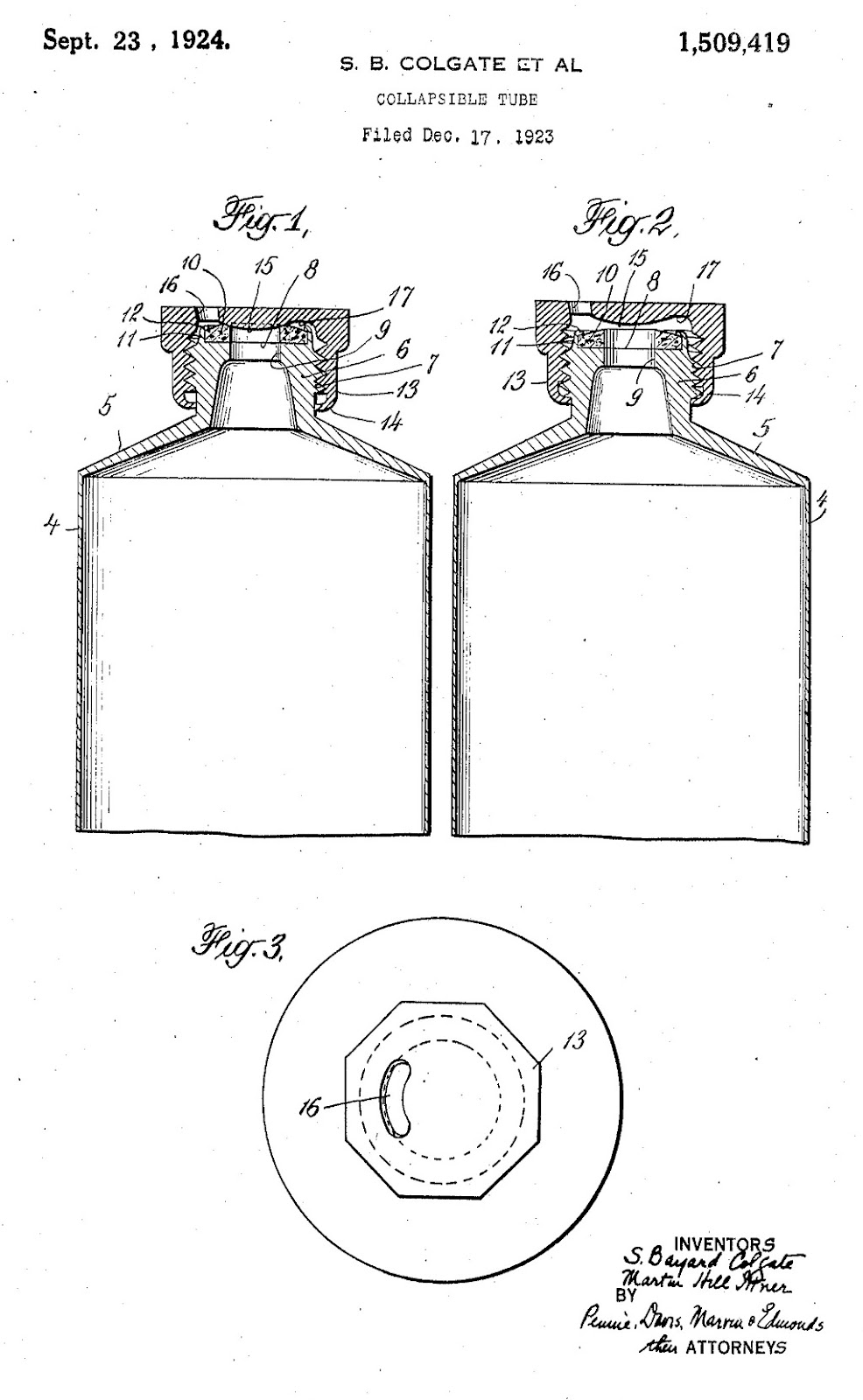 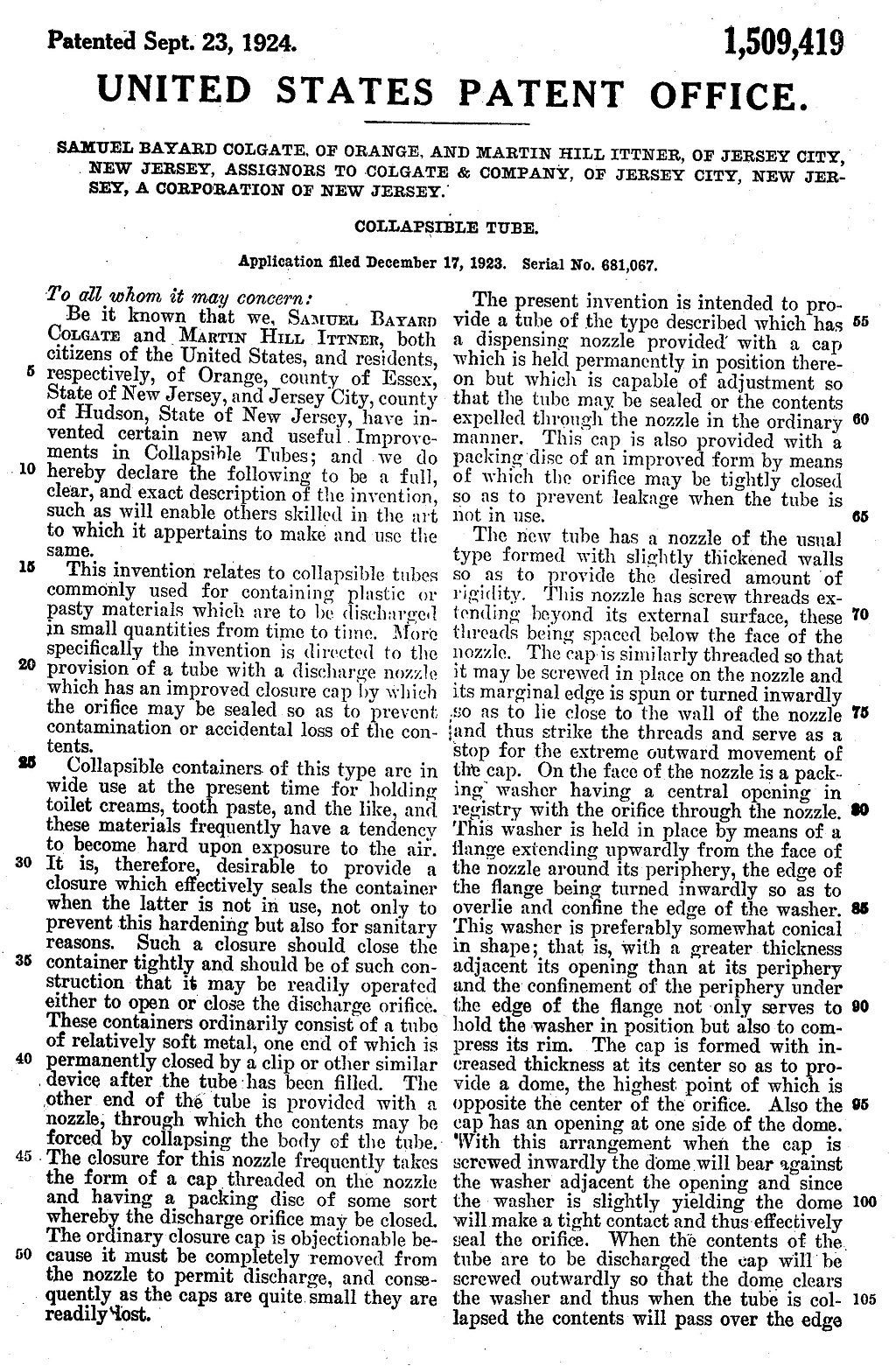 The Pompeian Manufacturing Company was bought out by Colgate. 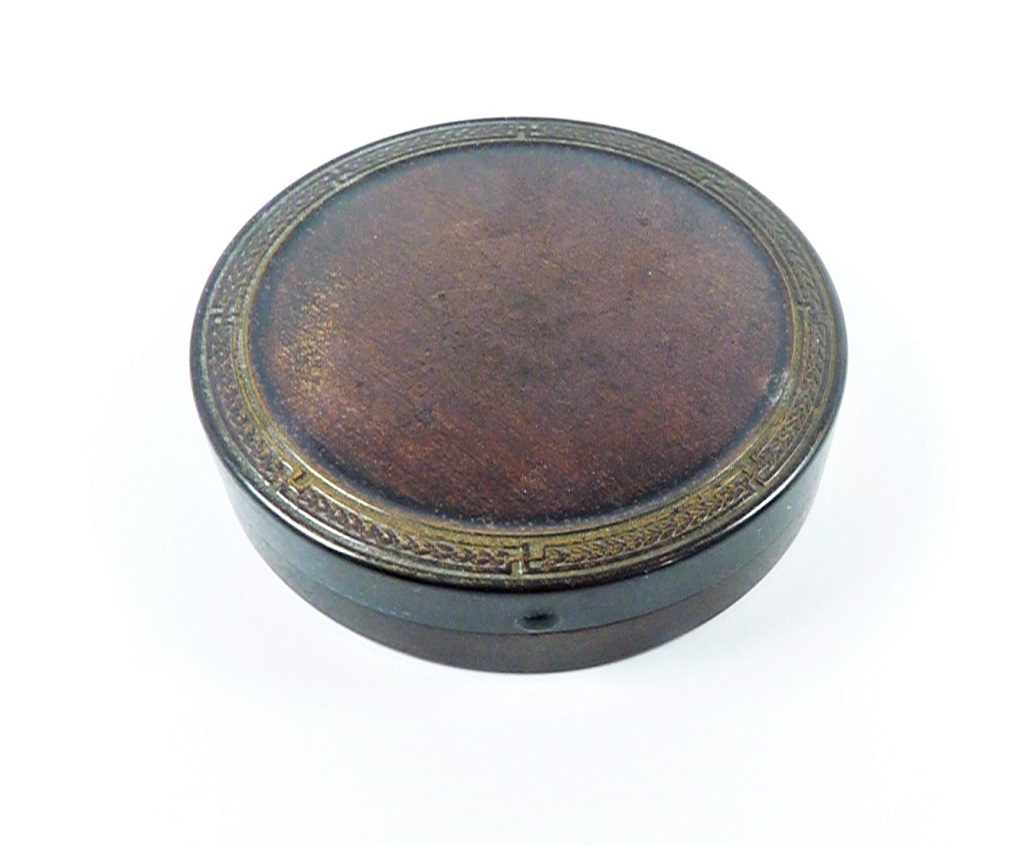 This is such a beauty & ideal as a film prop too. The whole exterior case is fine enamel. The lid is decorated with the classic laurel leaves in a circular band. 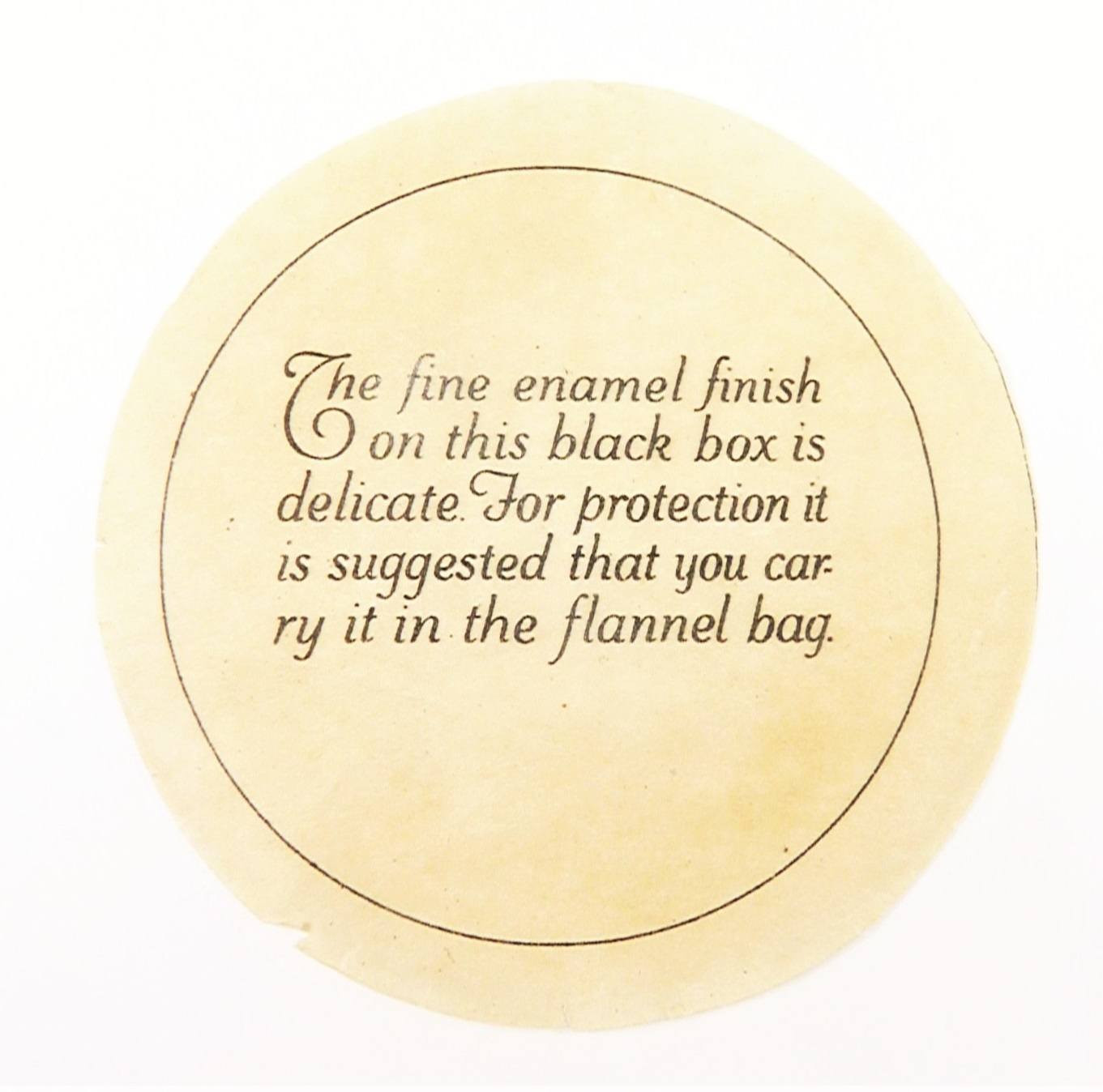 As we can see from the original instruction leaflet this compact would have been black when it was first manufactured in the 1920s. 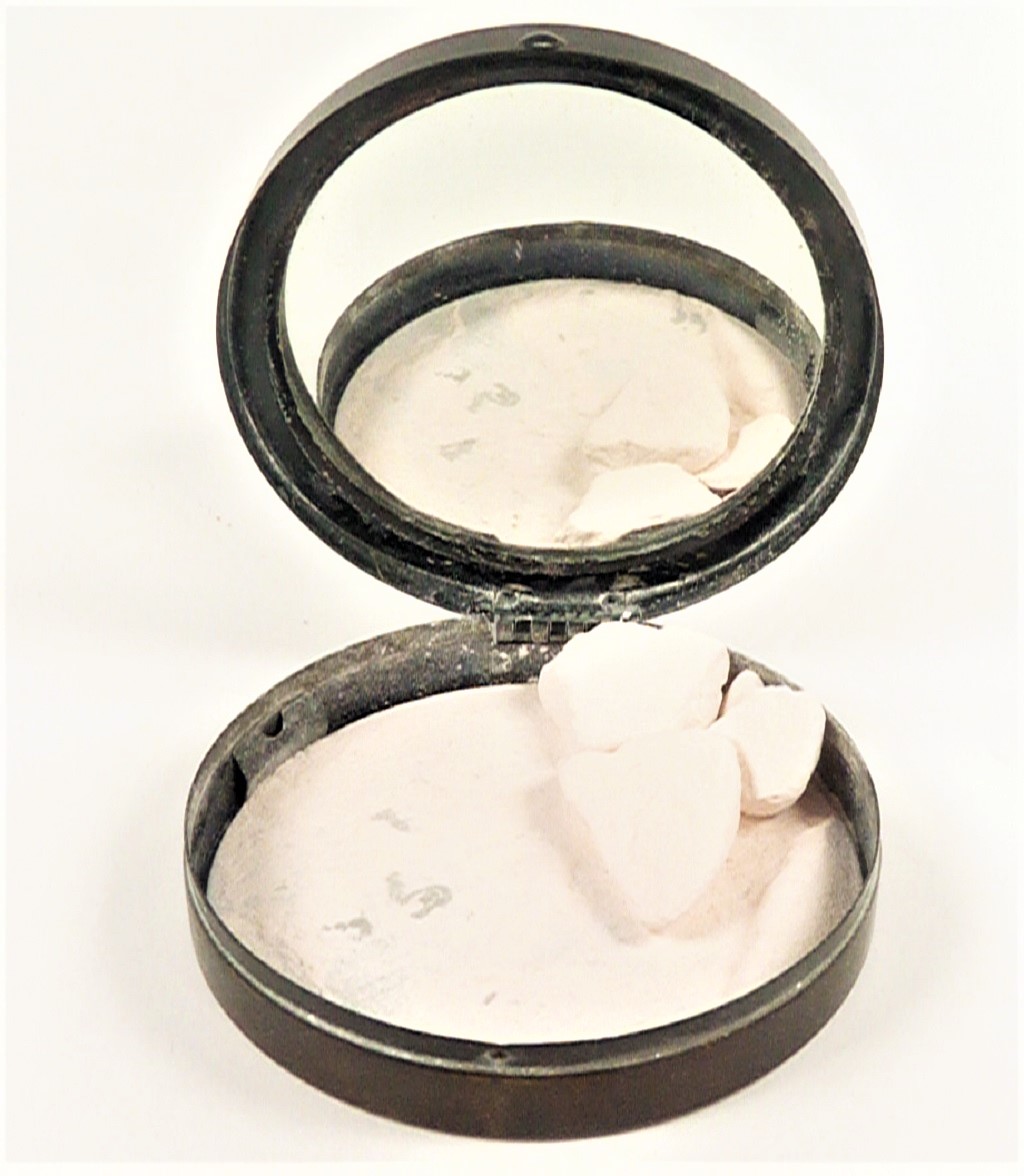 This vanity is made all the more charming by the presence of the original high quality golden silk & lambs wool puff, which is in superb condition & the instruction leaflets too.

The compact is signed: