At one time this business was the largest company in the world specialising in the production of silverware.

These companies were located in Meriden, Wallingford or Middletown.

These companies often carried on using their own brand names or their wares were stamped International Silver Company or International Sterling. Often more than one of these registered names appear stamped on their silver products, as you can see on the image below. 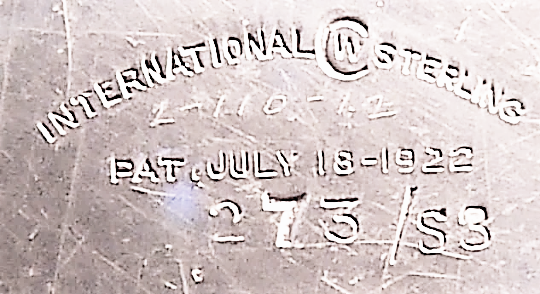 The image is taken from a 1920s sterling silver Twinette compact mirror.  The letter W is almost encircled by what appears to be a large C. Some people state that this character is a half moon, rather than a letter. This is the maker’s mark of the Watrous Manufacturing Company. In this instance the character does appear rather like a letter.

There are other variations of the mark in which the character does look much more like a crescent moon.

The image of the maker’s mark on the base of the compact also gives information about the date of a patented design. But if you look for a patent with that date applied for by the Watrous Manufacturing Company you will not find one. This is because the company purchased the patent from the inventor, Oswald Cathcart in 1922. The inventor was the General and Advertising Manager of Lazell Perfumer. This firm was one of the earliest perfume manufacturers in America. Cathcart wished to design a vanity case which offered a much larger area for face powder and a smaller compartment for rouge.

The quantity of rouge which will be used during any given period will ordinarily be very much less than the quantity of powder required. 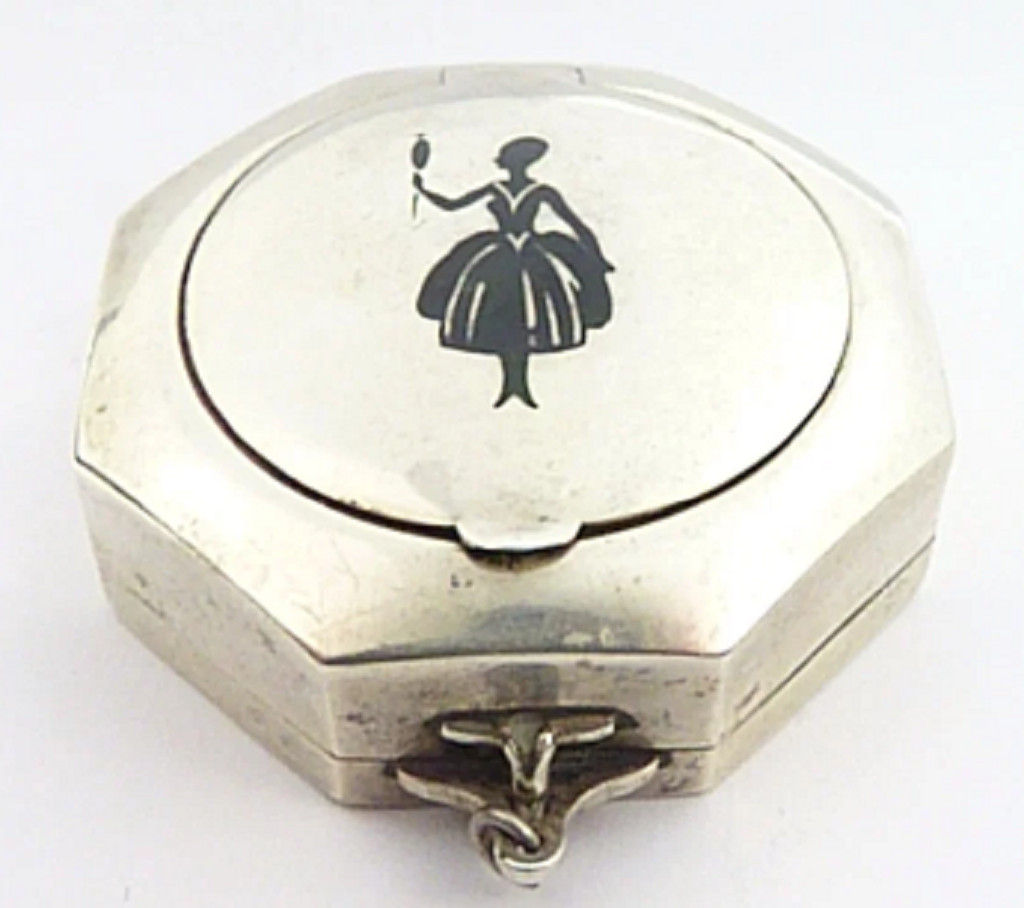 We are grateful to Michael Hetherington for his research which dates this compact to 1923 - 1924 and also provides the name of the inventor.

As you can see from the image above left, the Twinette was made in shapes other than round. The catches may also vary. The compact on the left is fitted with a clasp which is suitable for a wrist strap with a slider to tighten the strap around the wrist.  The base of the compact is also fitted with a bale on to which a tassel would have been attached.

Scroll down the page to see the 1924 advertisement which the firm placed in Vogue to picture these appendages.

Fig. 2 is a view of the same case showing the main cover raised to open the powder compartment. Here you can see the detachable mirror, 10, which forms the base of the rouge compartment. 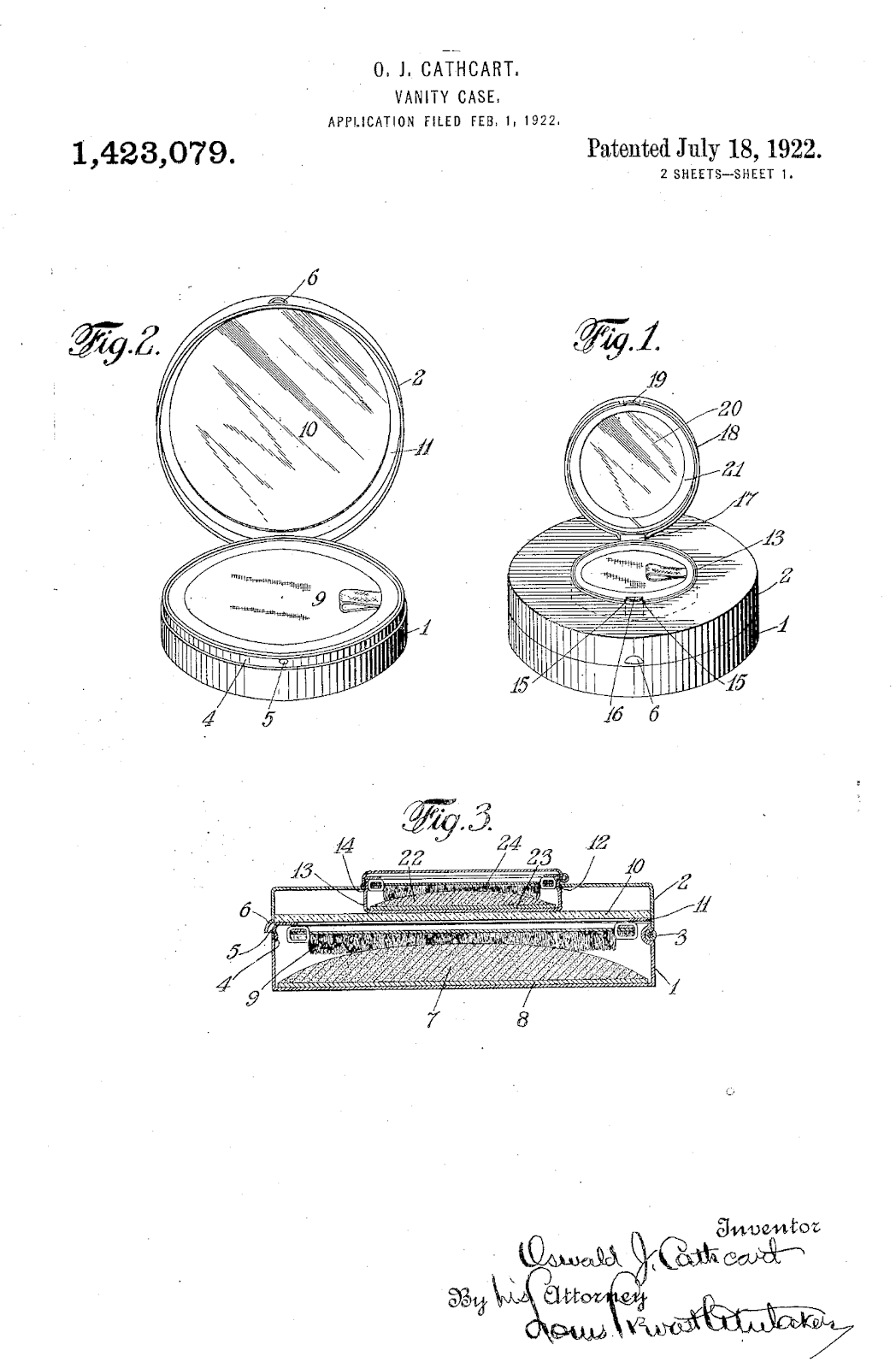 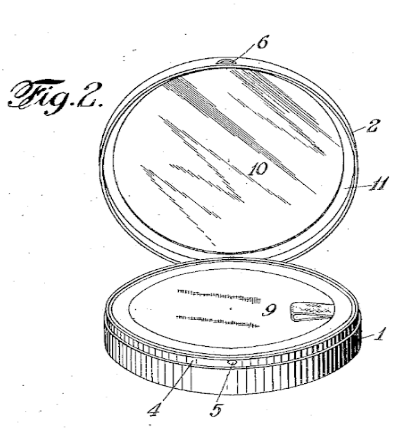 In the bottom of the main body member, 1 is placed the supply of powder which is preferably in the form of a solid cake indicated as 7 (Fig. 3) supported by the usual plate, 8, of metal or other suitable material.

This design of vanity box is also suitable for loose foundation.

More information from the inventor:

It will be understood, however, that powder in other forms may be placed in the powder compartment although I prefer to employ the solid form in order to avoid the possibility of the powder being spilled as it is used.

1 main body member adapted to fit over a shouldered portion 4
2 main cover
3 hinge
4 shouldered portion
5 suitable catch comprising a projection adapted to engage a recessed portion 6
6 recessed portion
7 solid cake
8 metal plate
9 represents a powder puff of usual construction, which is conveniently placed within the powder
compartment above the surface of the powder.
Inside the main cover member, 2, is provided with a mirror, 10, held in place detachably by a friction
ring 11
The main cover member, 2, is provided with a central aperture, indicated at 12…this aperture receives the
body portion, 13, of the rouge container
the lateral walls of the rouge container being grooved annularly, as indicated at 14, so that when the rouge
compartment is forced into position in the aperture 12, it will be securely retained therein.
Rouge… supported on the usual plate, 23.
The rouge container will also be provided with a separate applying puff, indicated at 24.
The rouge container will form the support for the back of the mirror, 10, against which it is held by the friction ring 11. 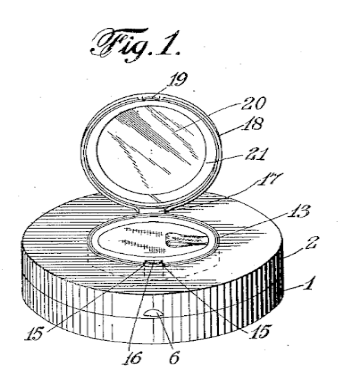 Unedited text on the main body of the advertisement which appeared in Vogue in 1924.

Beauty and Utility are the outstanding features of these Vanity Cases in International Sterling.
They fulfill the requirements of vanity with the mirror and the puff,
and besides a note pad, two coin holders and a compartment for visiting cards.
They are made in a variety of new engine turnings and hand engraved designs of character.
Bearing the Watrous trade mark in International Sterling you will find all sorts of clever novelties-
vanity cases in a great variety of shapes and ornamentations in addition to those illustrated, cigarette cases, match cases, buckles etc., all of beautiful design in sterling silver and gold stripe, each with a touch of newness that gives it individuality and character that will please you.

The advertisement shown previously has the image shown above attached to the bottom.

It reads as follows:

We cropped this off the bottom to make the advertisement large enough to read. 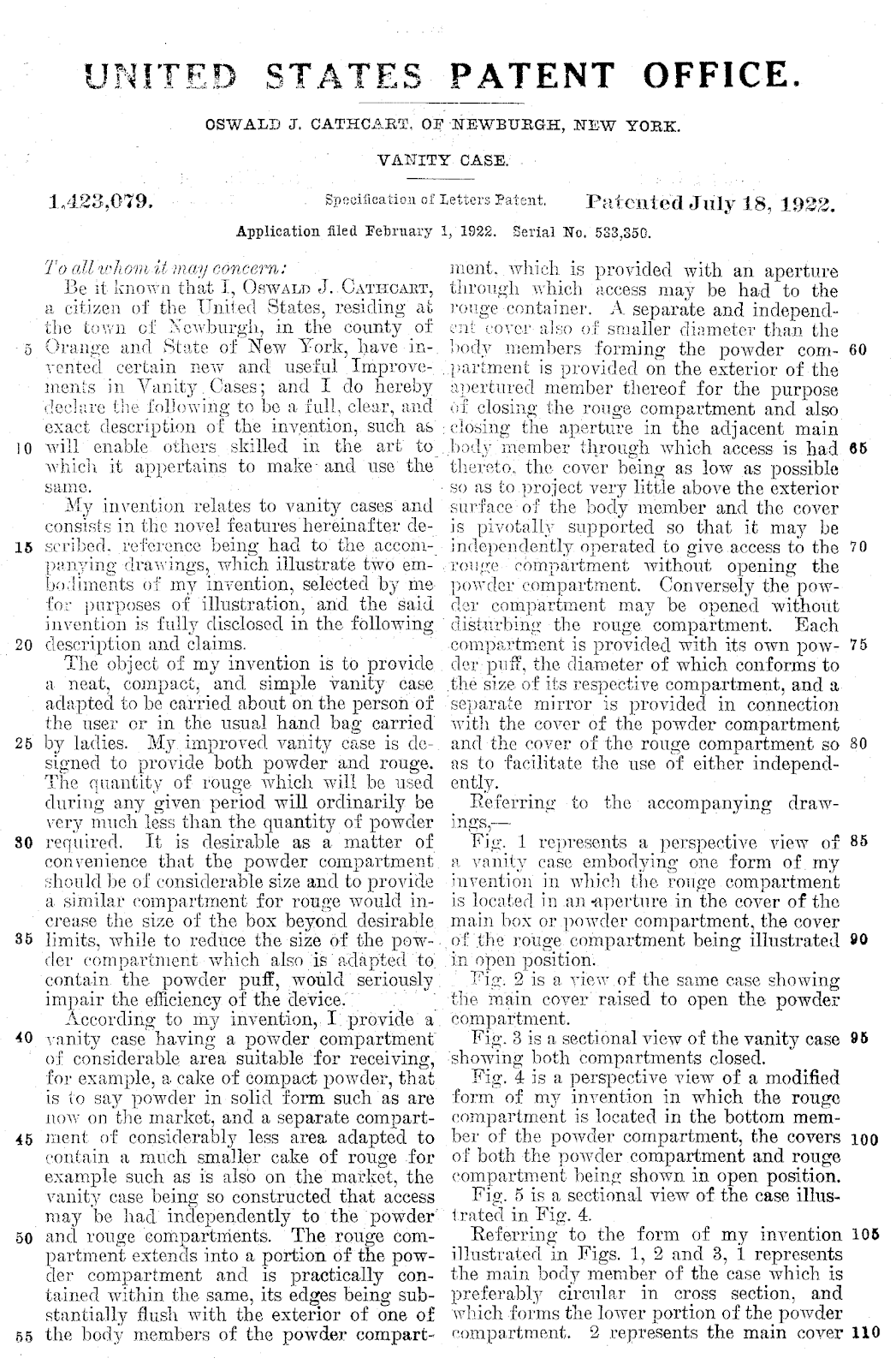 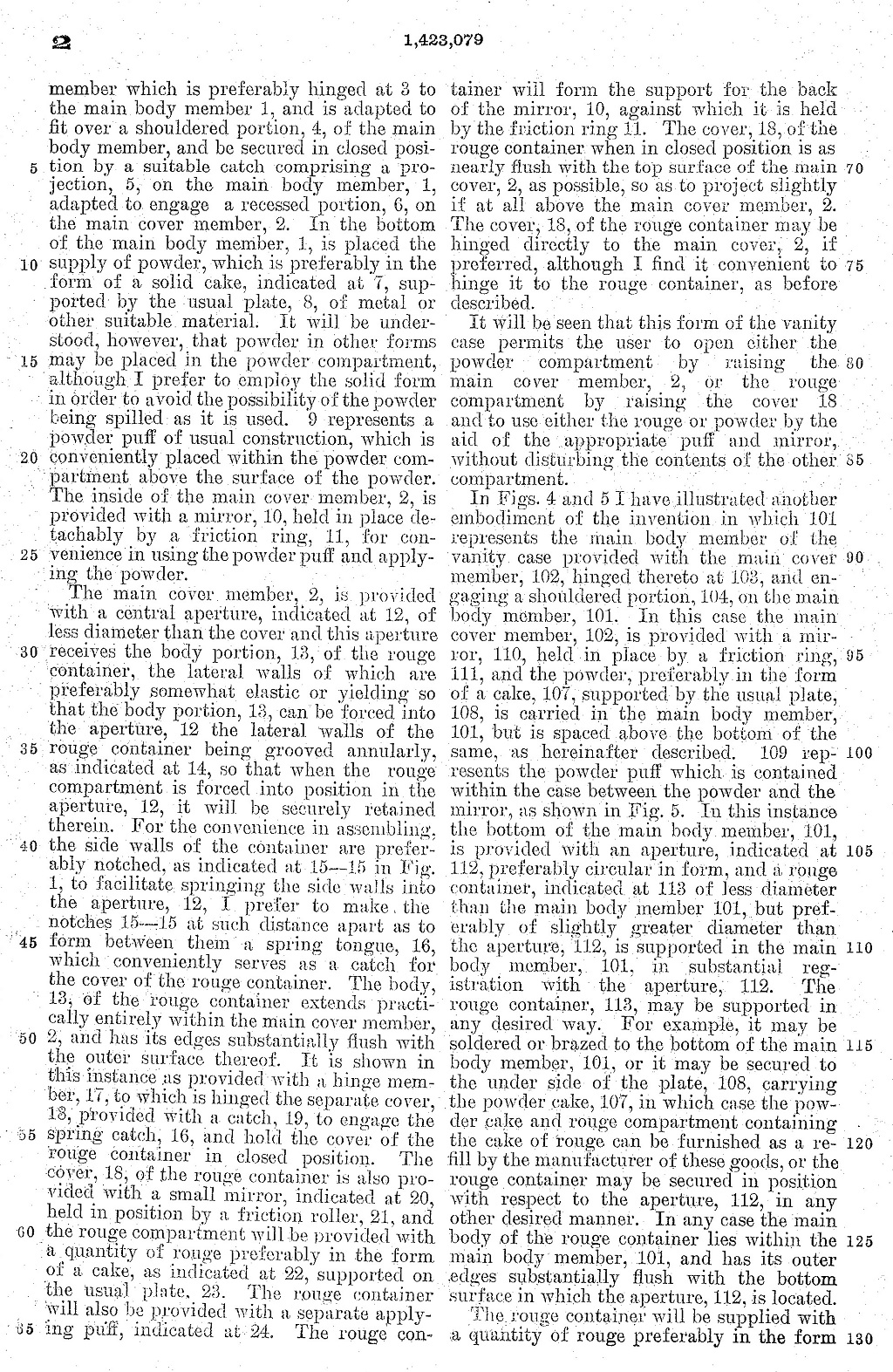 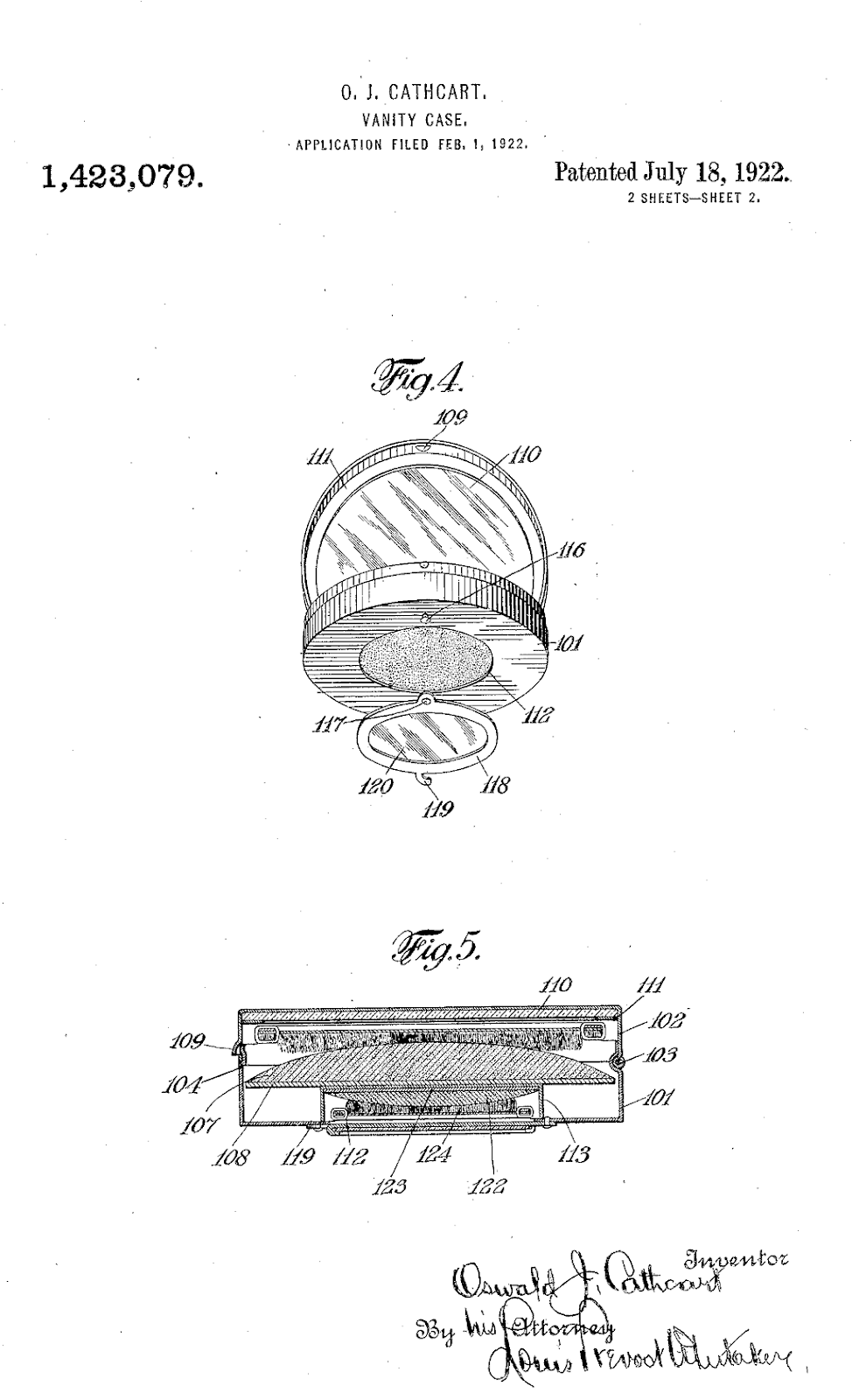 In Figs. 4 and 5 I have illustrated another embodiment of the invention. 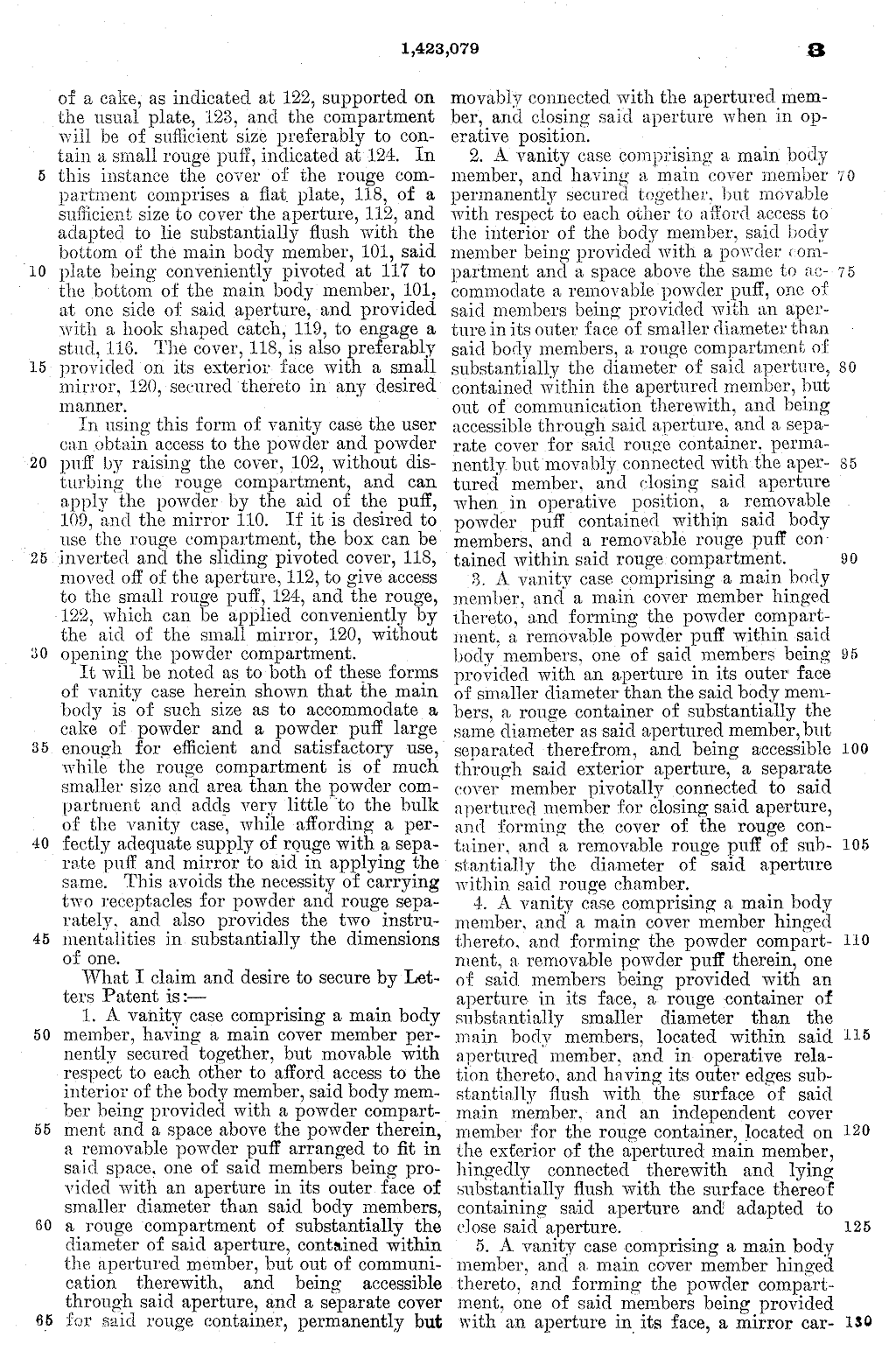 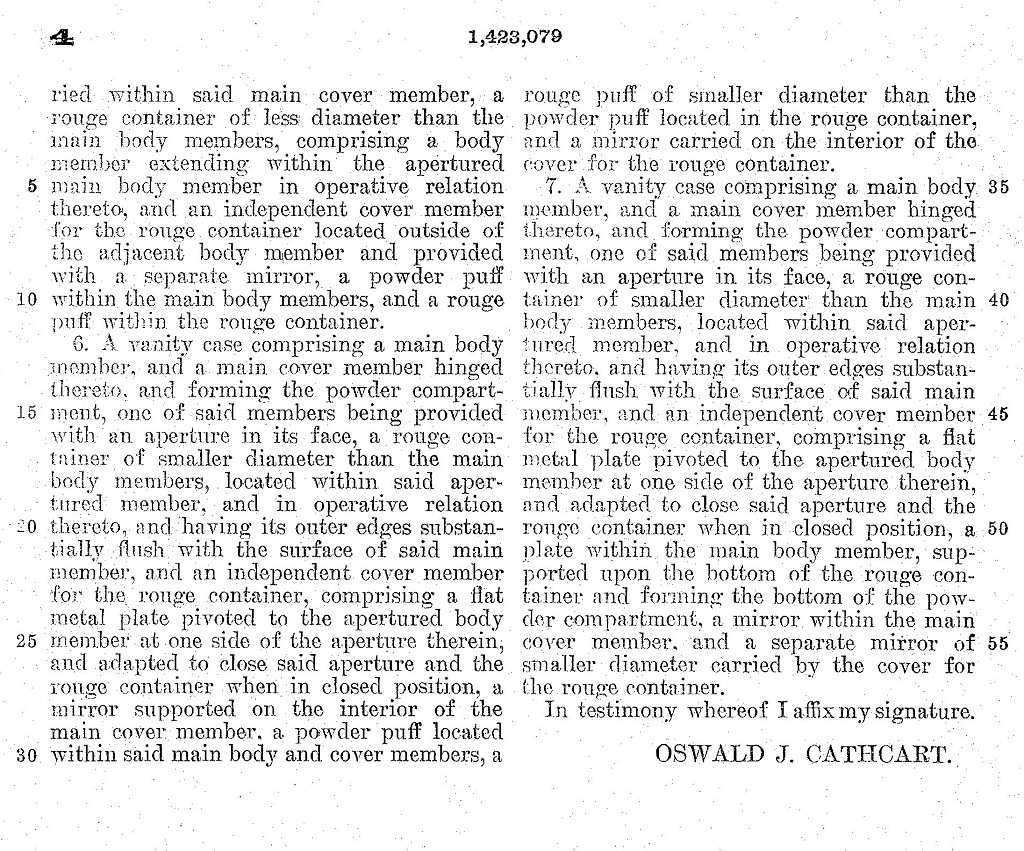 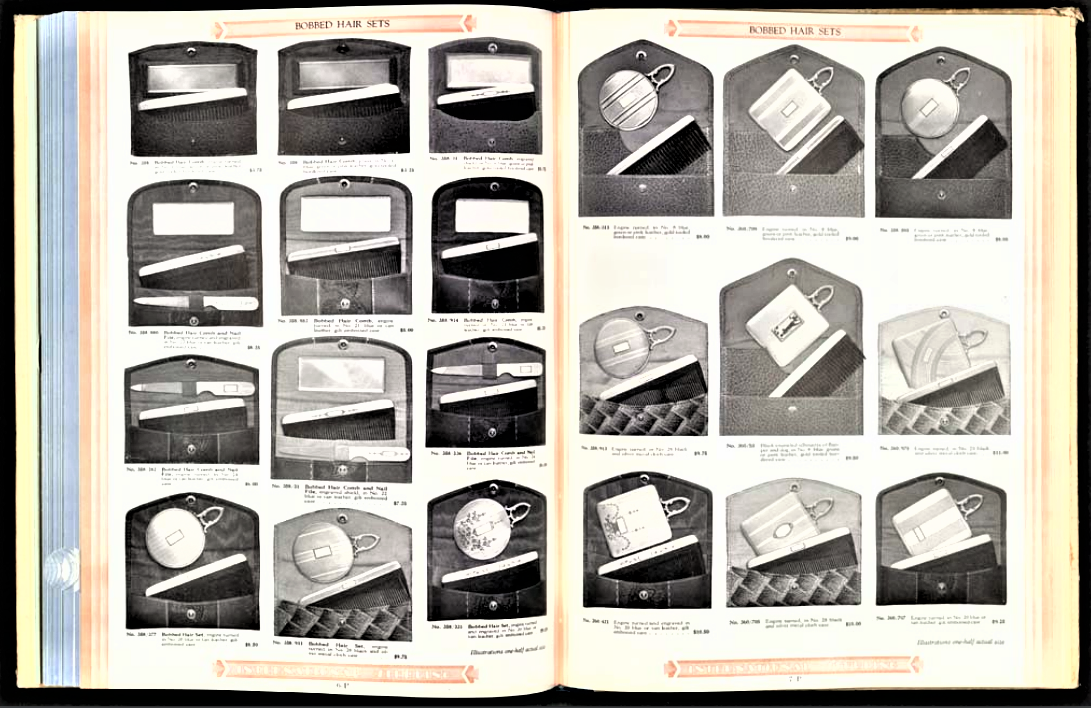 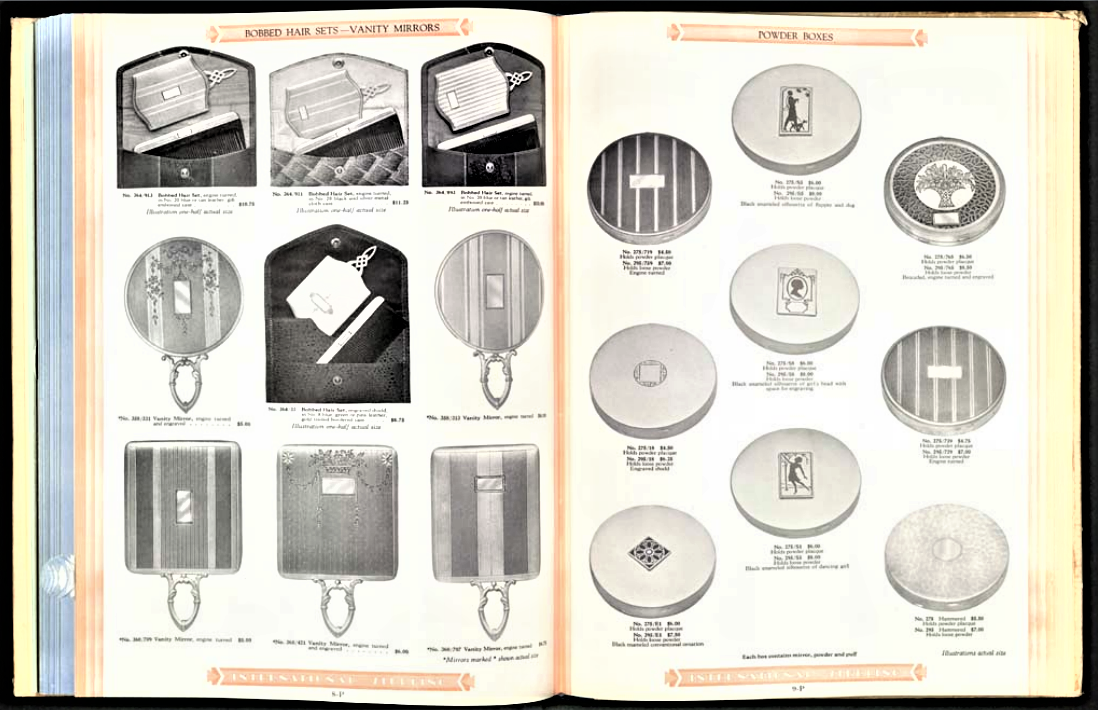 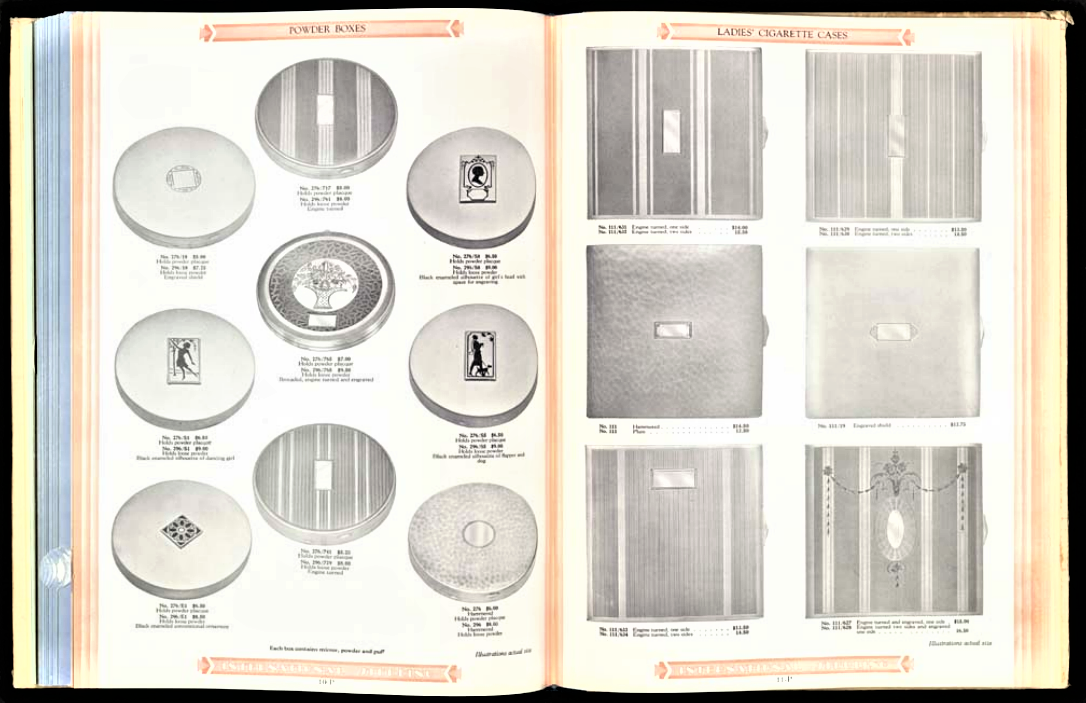 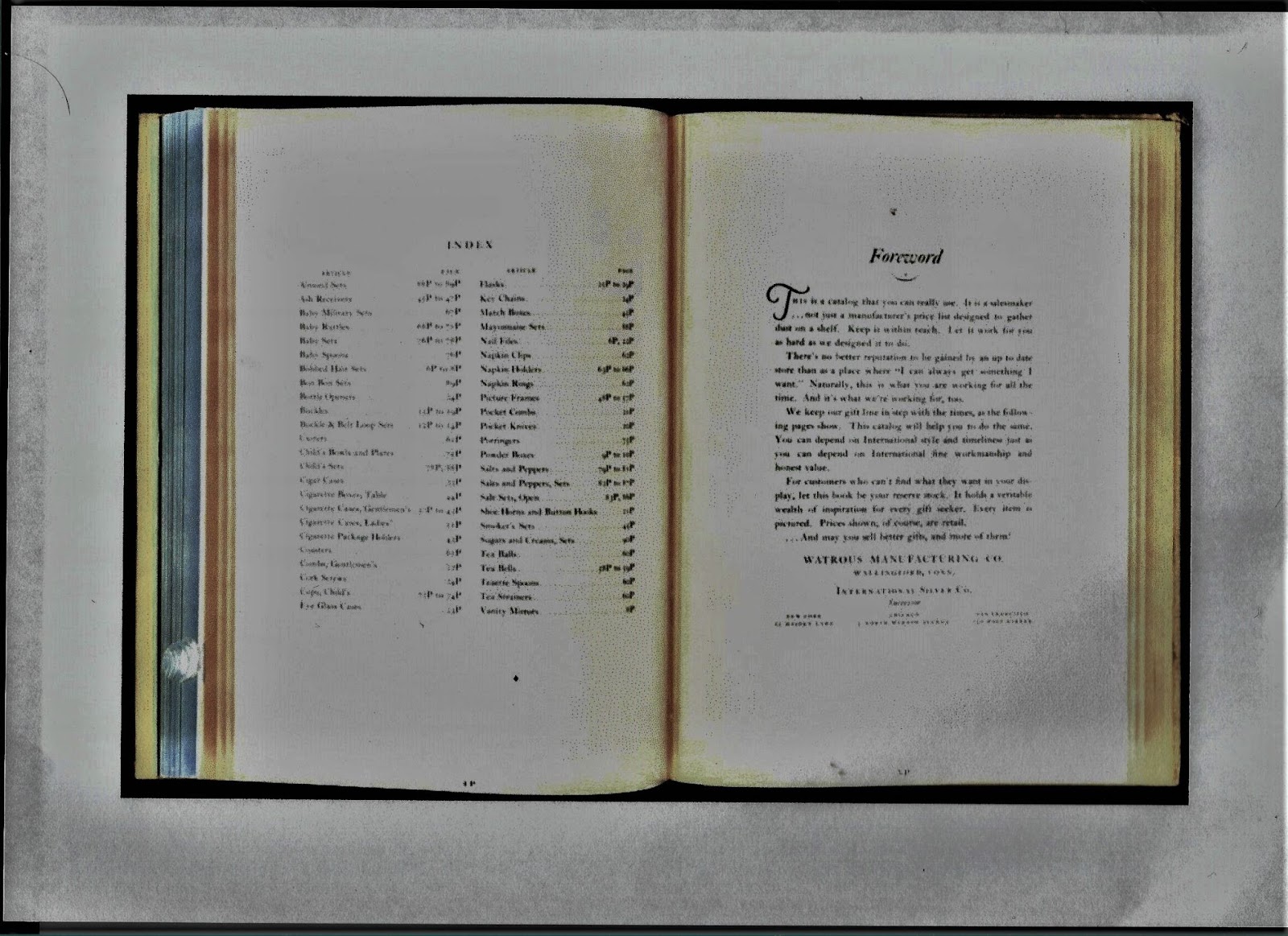