Joseph Ettlinger and his partner Adolphe Aron were located at 60 Aldermanbury London EC from the late 1860s until the beginning of the 1870s. They were the London partners of Triefus & Ettlinger of 103 rue du Temple, Paris. Both gentlemen became particularly well known for their jewellery, cases, elegant fans, leather & ivory goods. The firm also imported French made luxury accessories. The partnership appears not to have lasted past the early 1870s when Ettlinger relocated to 30 Lawrence Lane, an address that can be seen on the first patent shown on this document.  At this juncture the firm became known as A & J Ettlinger.

Joseph Ettlinger became the Master of the Worshipful Fan Makers Company in 1904.

This guild of fan makers has been in existence since the reign of Charles II and may be before that time.

Throughout recorded history the amount of foreign imported fans was damaging to the domestic fan making trade. From time to time monarchs would be petitioned to help boost domestic trade.

Queen Ann was petitioned for the grant of a charter which established The Master, Wardens, Assistants and Society of the Art and Mystery of Fan Makers of London and Westminster and Twenty Miles Round.

The company was incorporated in 1709.

One of the duties of the company was to protect English fan makers from cheap imports. The company also set wages, offered training for apprentices and ensured the quality of products.

By the Victorian era most fan makers were also jewellers, goldsmiths or haberdashers, as it was unlikely that having the sole occupation of fan maker would be sufficient to make a living.

French fans and accessories were immensely popular in Victorian England. The Ettlingers were well known importers of luxury goods which originated from France and as the demand for French fans was high it is possible that they imported luxurious fans from this country for resale, as well as making their own.

English fan makers sought help to increase the demand for their wares and in response Queen Victoria donated £400 for prizes which would be given to the winners of a fan competition which took place at the South Kensington Museum in 1870. 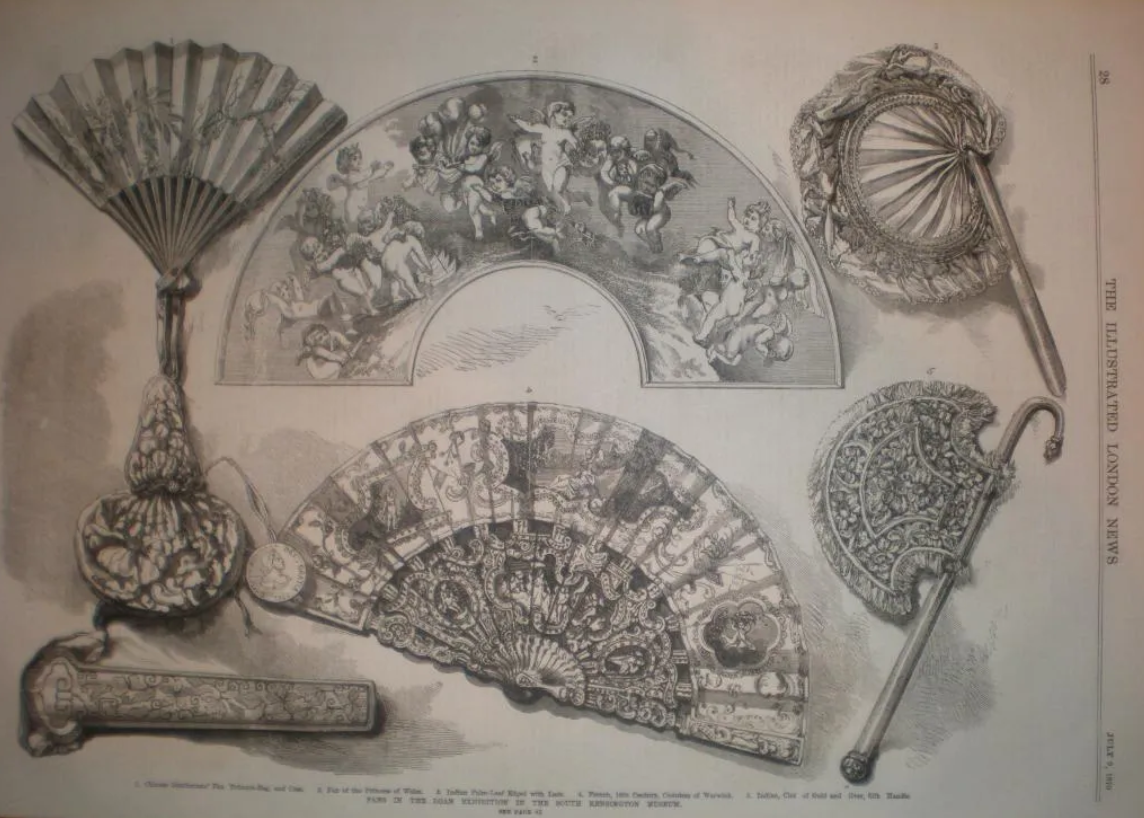 The listing in this London directory details -


We believe that the relevant Ettlinger references are those ones shown above in italics.

Ettlinger K. & Co were metal merchants located at 40 Great Tower Street E C. This was a business concerned with trading manganese / chrome in India. We do not think they are operating in conjunction with the Ettlinger family who were jewellers.

We are delighted to have found two of Joseph Ettlinger’s patents for improved designs of fans.

One of these patents is for a fan with a handle which retracts automatically when the fan is closed.

The patent and drawings are shown below. 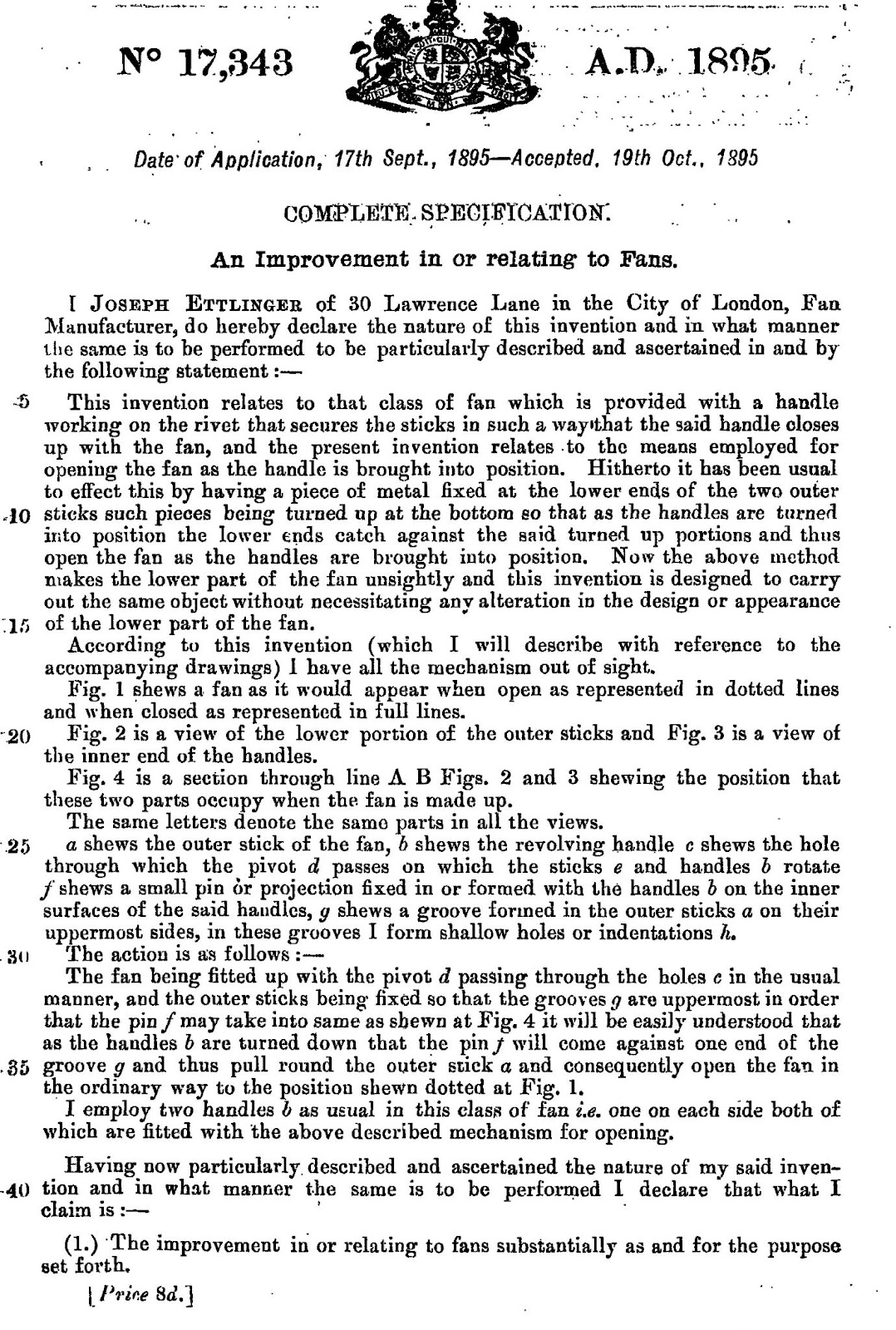 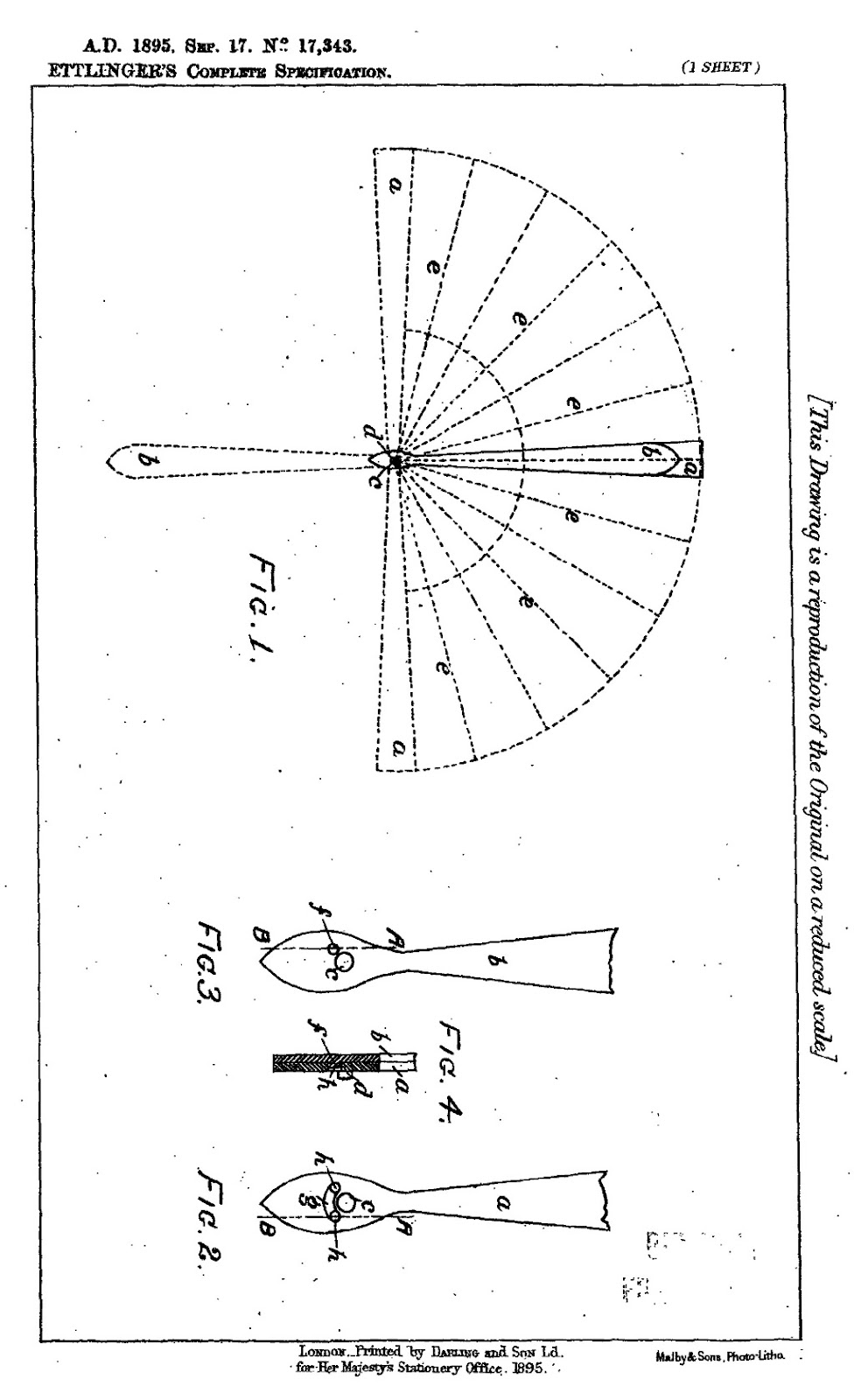 Joseph Ettlinger’s next invention was for a fan which opens automatically when it is drawn out of the handle.

The address of 30 Lawrence Lane is listed on this 1902 patent.

In the same year Paul Ettlinger applied to patent An Improved Pocket Case for Containing Various Articles for Ladies’ use.

This patent application was accepted on 29 January 1903.

His business address is listed as 176 Regent Street, London W.

Joseph Ettlinger is also listed at this address.

They were listed as -

At this time purses made from precious metals were much in demand. 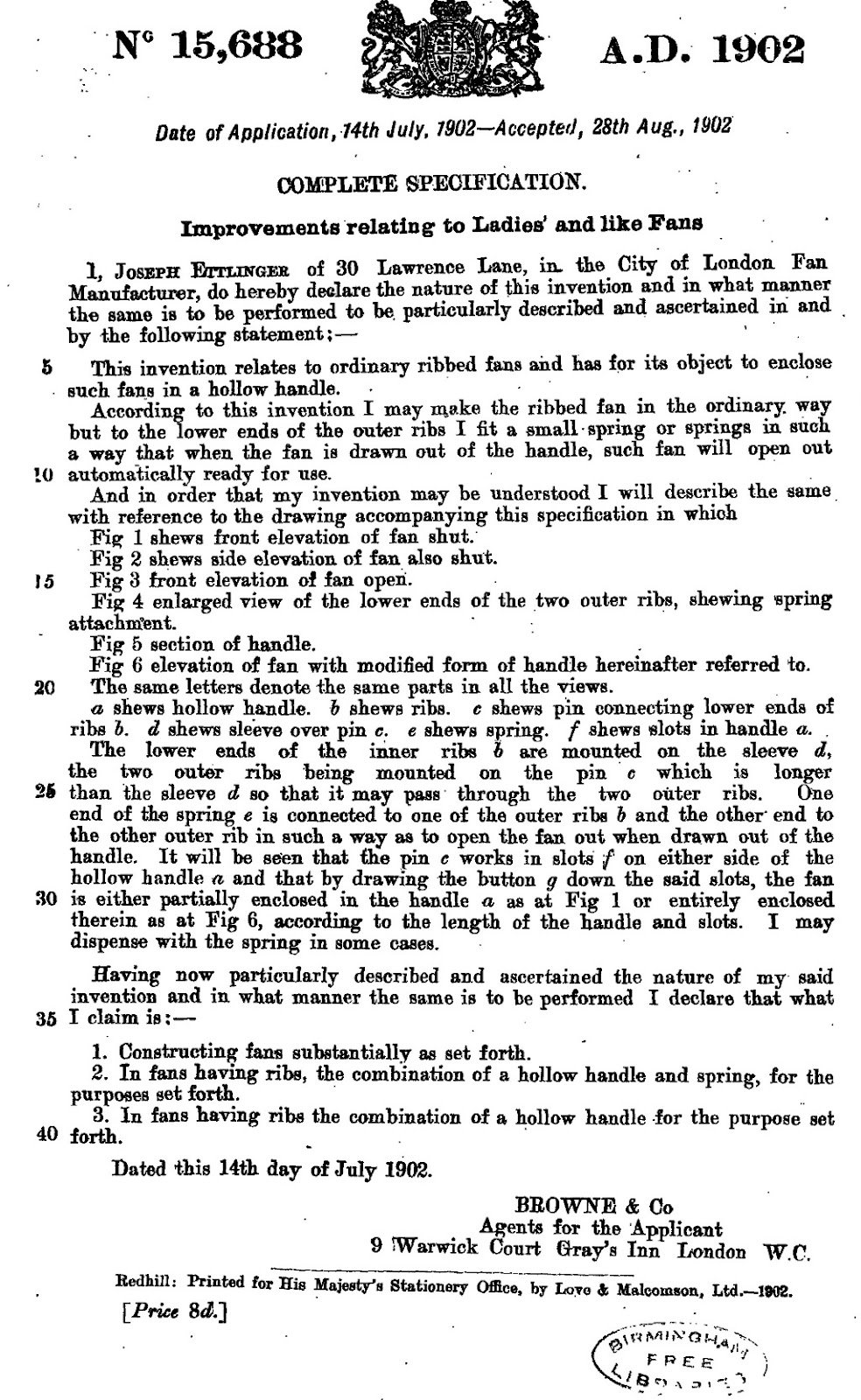 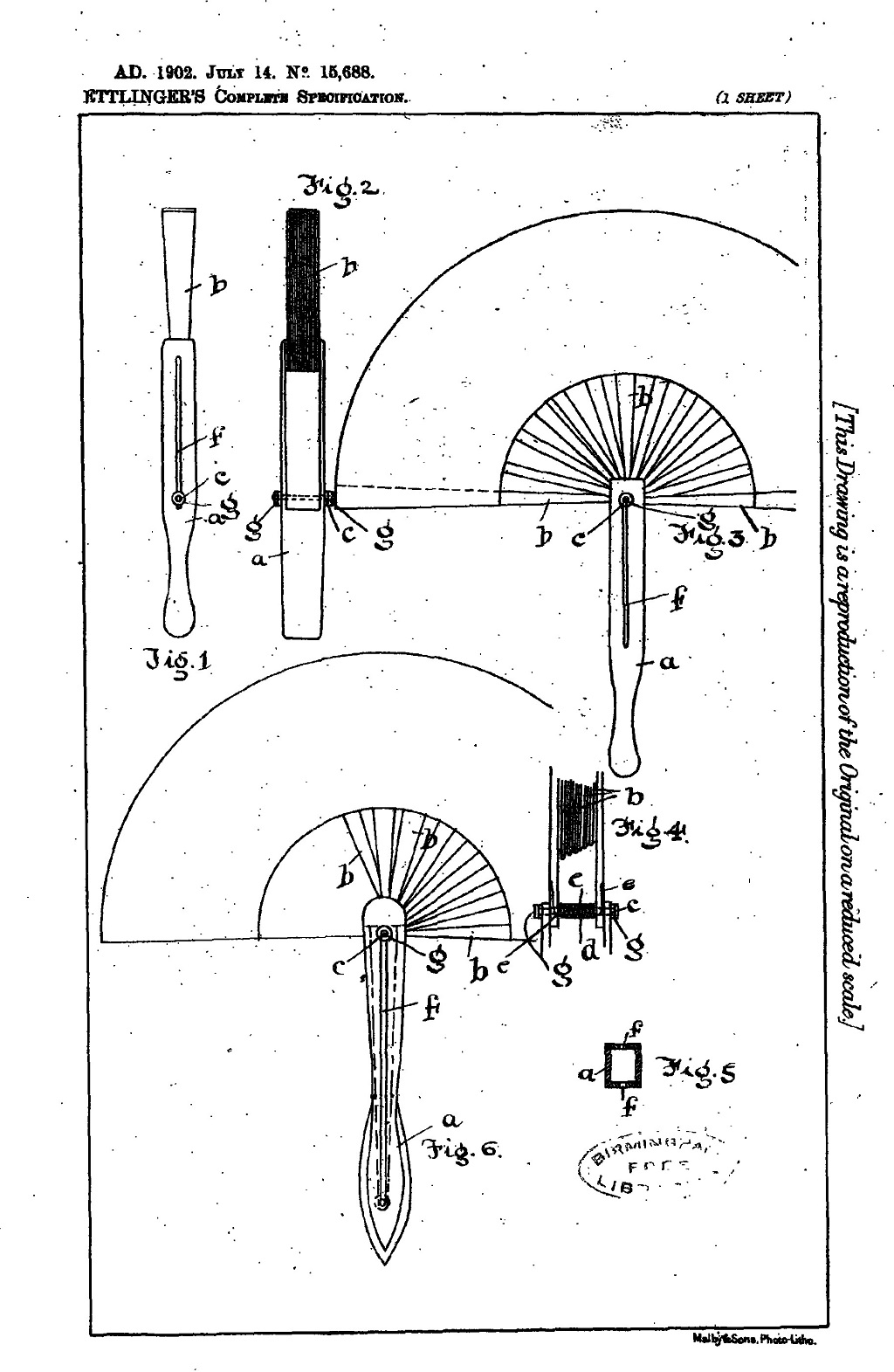 The next two patents were applied for by Paul Ettlinger.

As well as including the patent applications and patent drawings we have one of Paul Ettlinger’s splendid pocket cases. 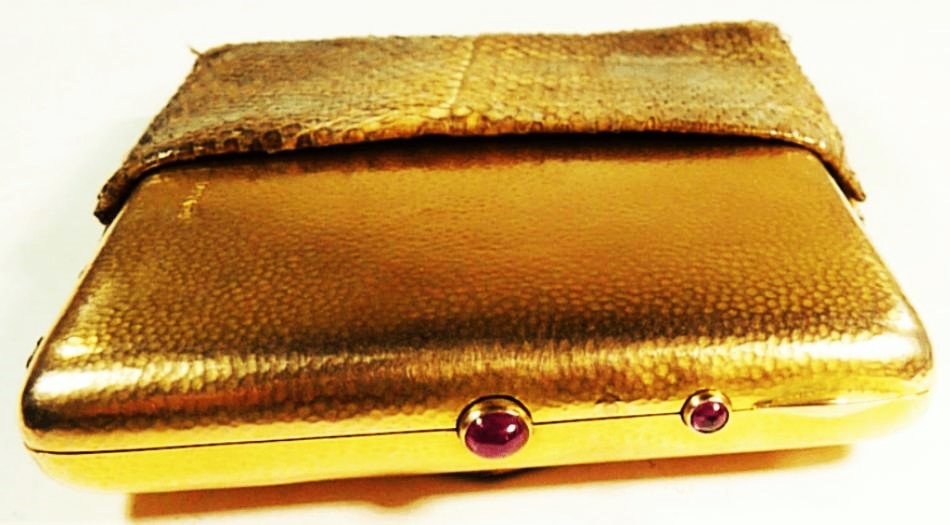 This superb treasure is hallmarked on the lid, base & interior compartments. The exterior case is the most exquisitely beautiful hammered gold & comes complete with the original writing implement and snake skin cover. The main thumb catch & the three other access points are set with ruby cabochons.

From 1842 it was illegal to sell imported gold or silver in Great Britain until it had been presented to be tested (assayed) at a British assay office. In 1867 the Foreign Mark was added.

The fully hallmarked 9 carat gold pocket case shown above was most probably crafted in France and since Paul Ettlinger applied to patent this design two years prior to its assaying in London it is likely that it was crafted by the Ettlinger’s Parisian partners, as this design was protected by his patent. The workmanship is superb.

On importation into Great Britain the sponsor, Paul Ettlinger, presented this vanity to be assayed at London. During its assaying the original hallmarks were obliterated, which was customary practice.

The new marks were struck in 1904 and are shown below.

From 1904 the carat value of gold was also shown and the decimal value of the standard was used.

CLOSE-UP IMAGE OF THE HALLMARKS

The importer's mark P E, the gold purity marks 9 .375 ﻿(9 carat gold) are shown first. Followed by the Foreign Mark, the date letter i and the leopard's head which represents London Assay Office. 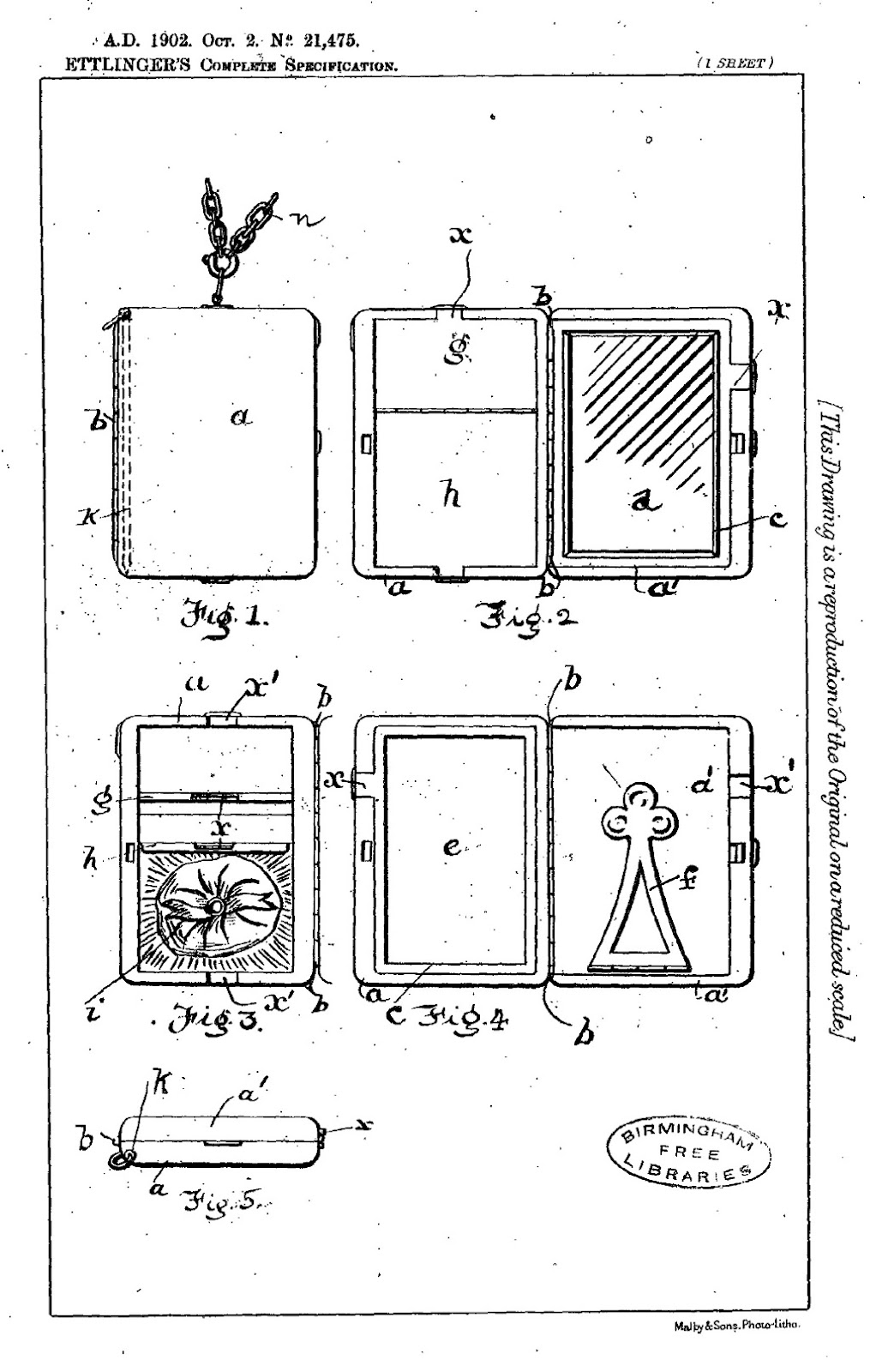 Not all of the pocket cases were fitted with spring pieces (f) for securing cards in the portion a1.

Fig. 1 shows how the case can be adapted to affix a chain. 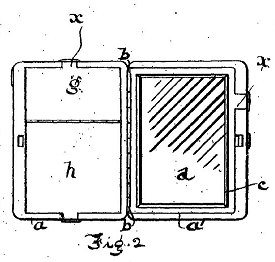 INTERIOR CASE
The same letters of reference denote the same parts in all views.
Fig.2 shows view of case open
a a1 shows the two portions of the case hinged at b
c shows a central hinged flap
this flap is provided on one side with a mirror d
and on its opposite side a note tablet e.
g is a hinged flap covering the compartment for containing money.
h is another flap for covering the compartment containing puff i
x show tongues of metal framed on certain of the flaps and taking in recesses x in the flaps below,
in order to give stability. 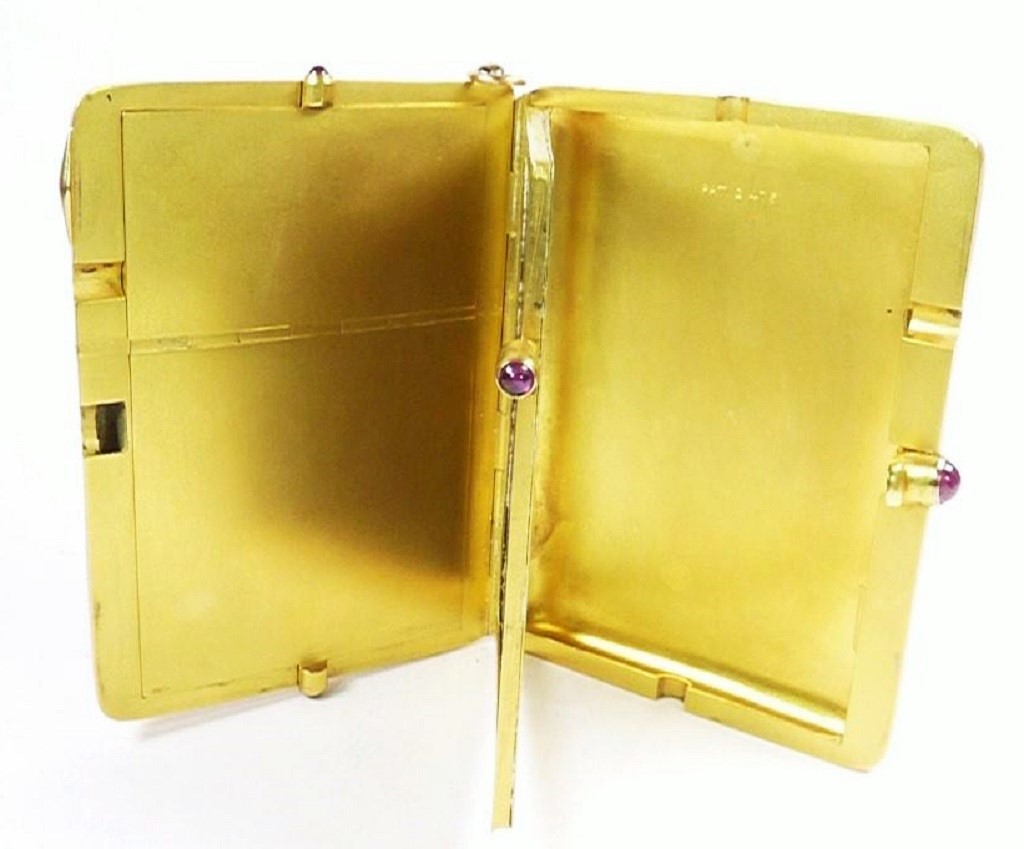 Each solid gold tongue is set with ruby cabochons.

In this image the compartment for money is shown top left.

The compartment for face powder and puff is larger and located bottom left.

In the middle the hinged flap is fitted with a mirror on one side and note tablet on the other side.

The image above shows the deep recess in which cigarettes or paper money could be stored. 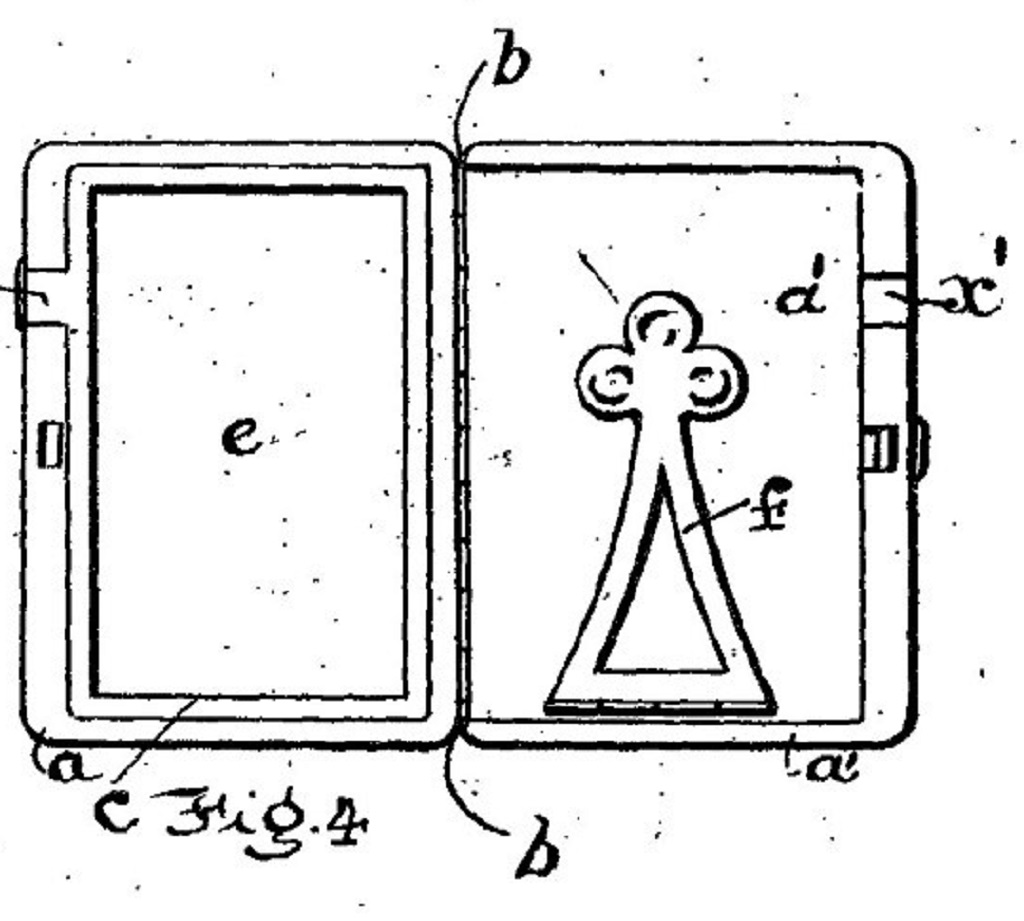 Figure 4 depicts the version of Paul Ettlinger’s case which appears not to have two compartments on the same side or we would see the x marking the place on the top and bottom where the tongues would go, as we do on the left hand side on Fig. 2.

Paul Ettlinger was attempting to patent all the possible designs for his improved pocket case. 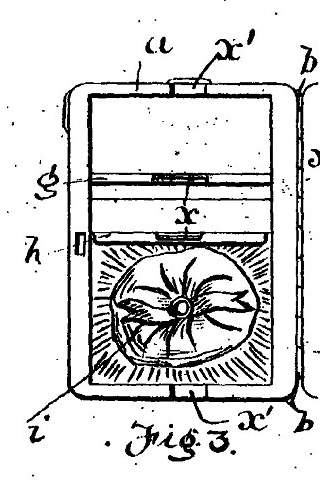 CLOSE UP OF THE POWDER COMPARTMENT WITH PUFF

The diagram shows that the puff is fitted with a ribbon which is attached to a ring which would probably have been made from Celluloid.

g is the cover for the money compartment which is shown raised. This compartment could also have housed vestas. At this time everyone needed vestas / matches to light stoves and candles even if they did not smoke cigarettes. Although, an Edwardian lady who was wealthy enough to own one of Paul Ettlinger’s solid gold pocket cases would probably have had servants to perform these tasks.

We have seen necessaires from this era fitted with cigarette compartments. 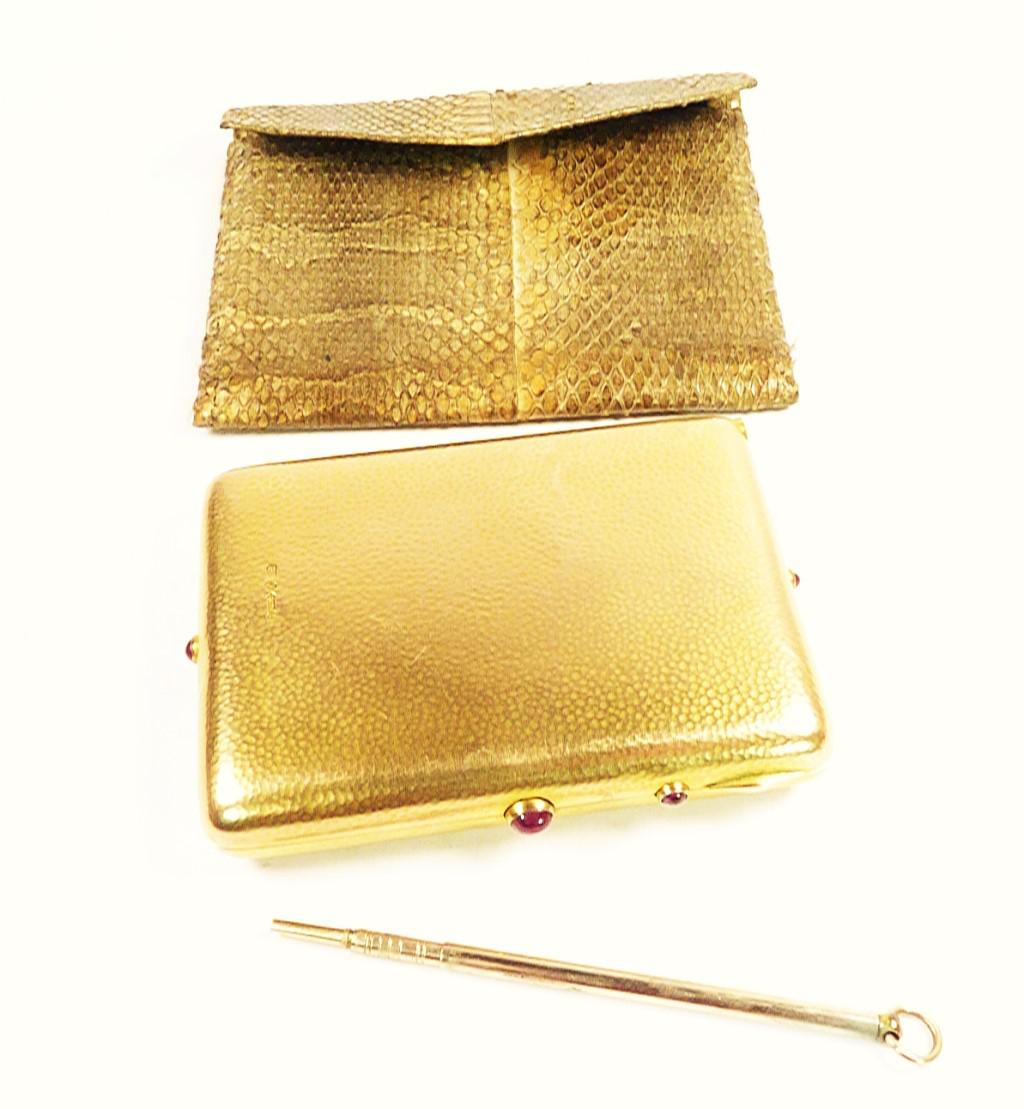 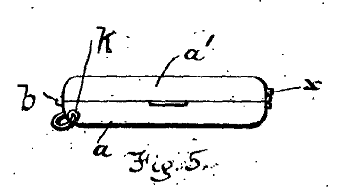 k shows the pencil passed through the hole in the case. 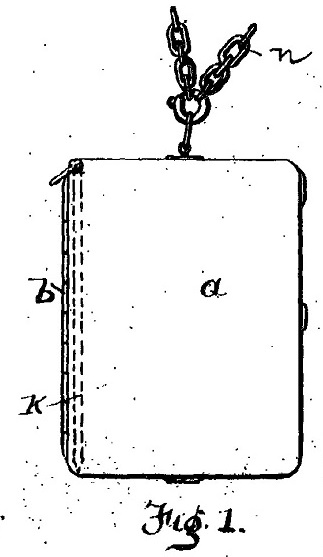 Fig. 1 shows the position of the gold pencil inside the case by means of two broken lines (k) 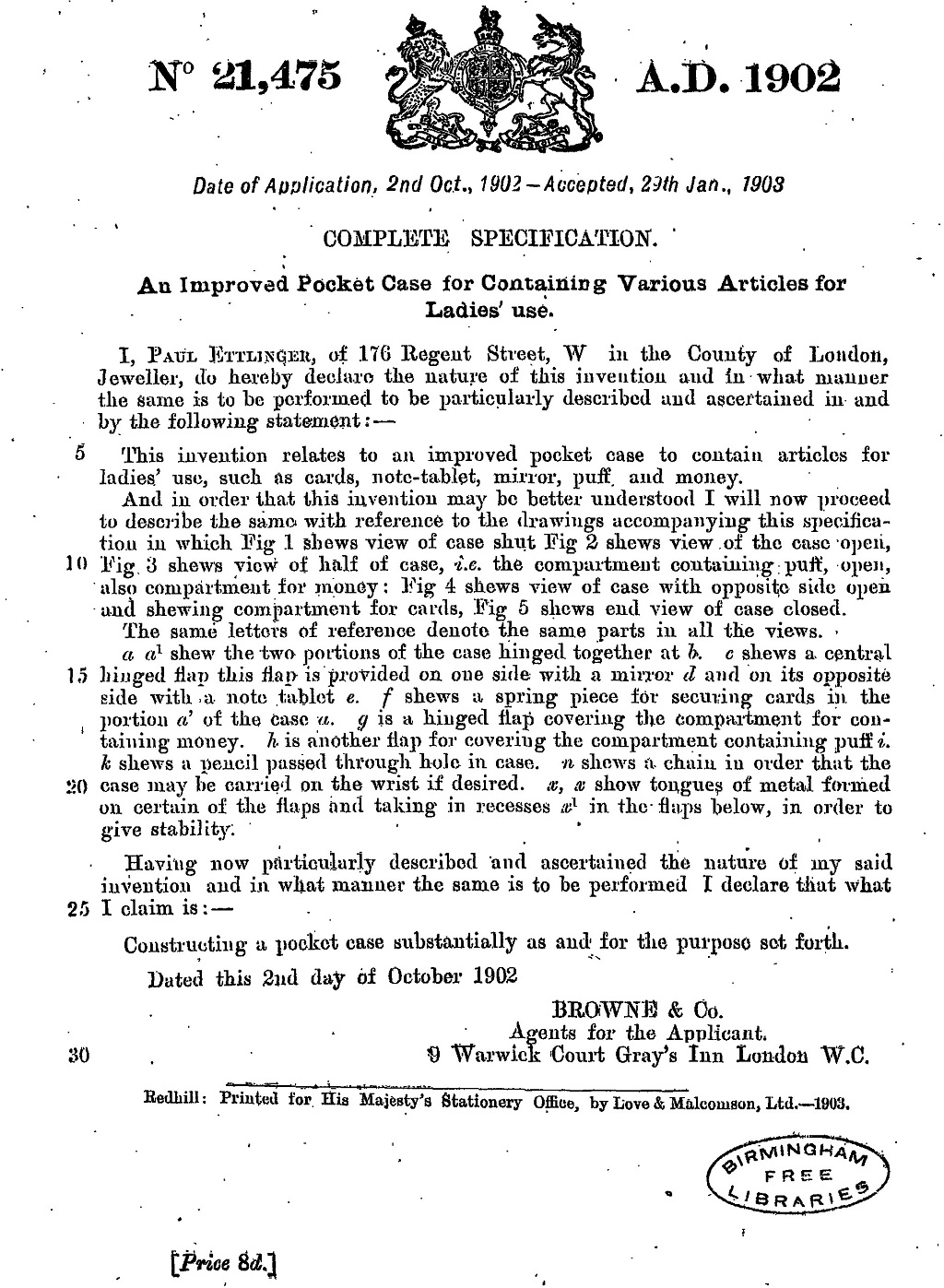 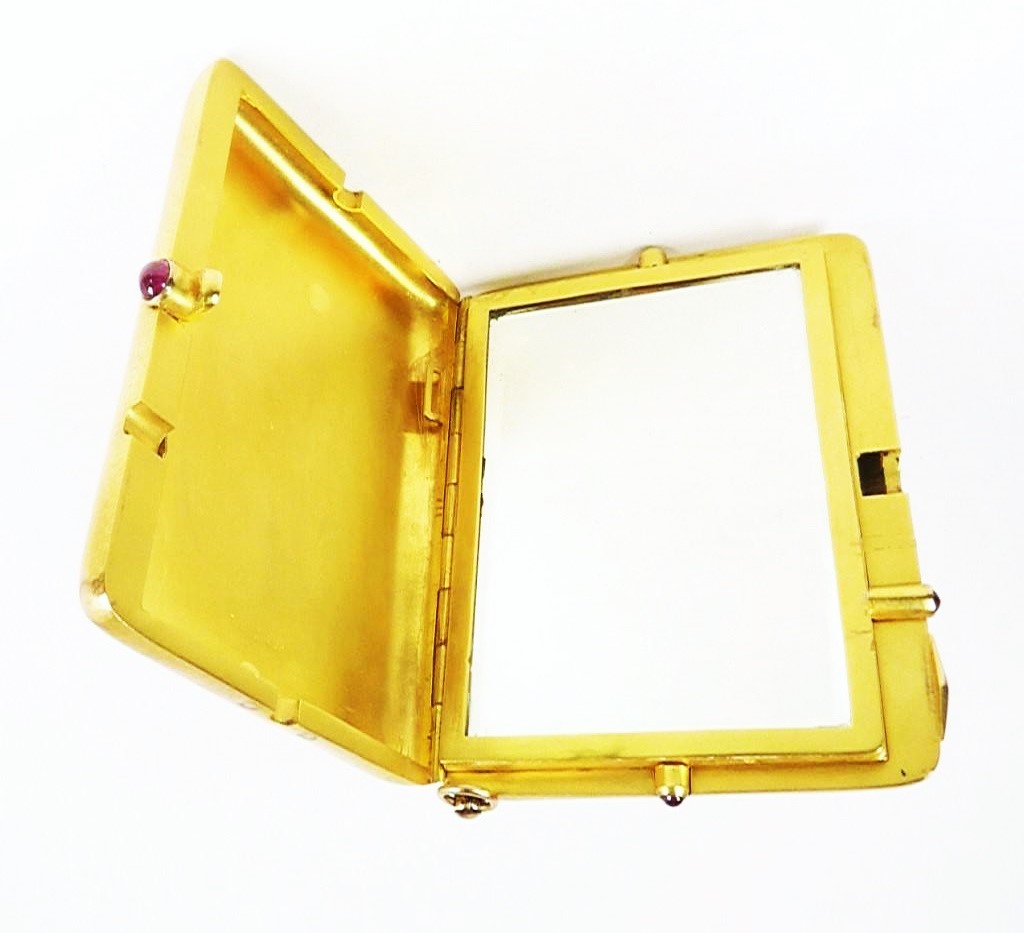 The compartment revealed is fitted with a custom made anchor onto which a strap could be placed.

As our histories are usually compiled in chronological order we would now like to refer once again to Joseph Ettlinger’s fan making.

The King & Queen were showered with gifts from all over the world.

Many of these presents were crafted by British makers of luxury accessories.

The Worshipful Company of Fan Makers presented an exquisitely beautiful fan to Queen Mary on the occasion of the coronation. 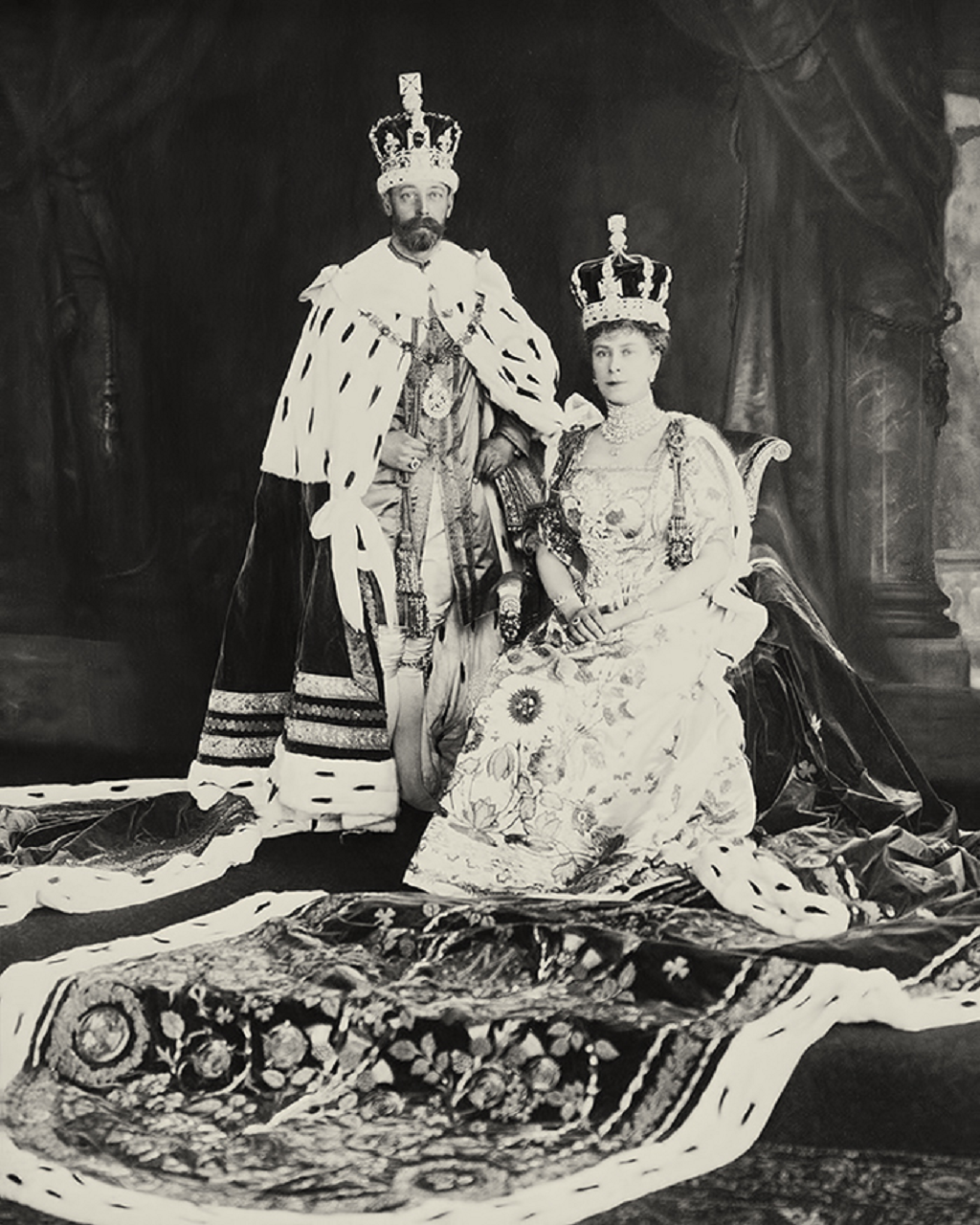 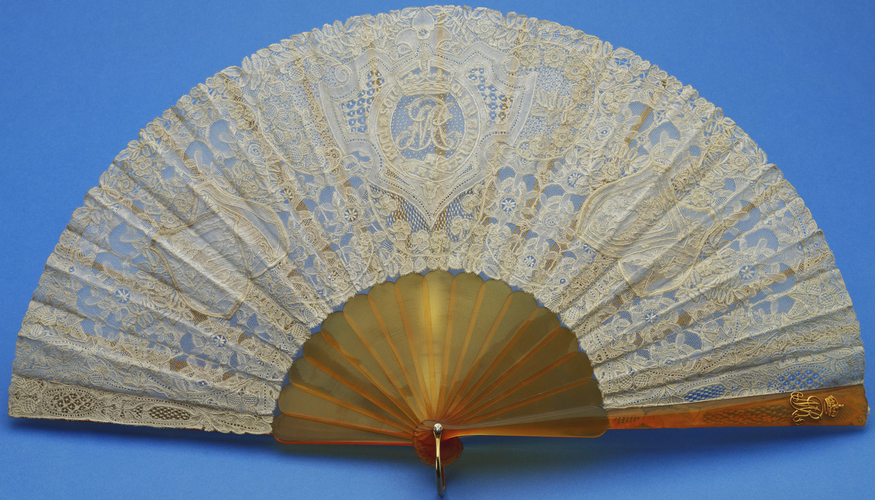 The fan was made from Honiton lace. The lace leaf was made in the workshop of Miss Fowler of Honiton. The fan was designed by George Woolliscroft Rhead. The guards and sticks were carved by Robert Gleeson.

Joseph Ettlinger, Past Master of the Fan Makers Company, was the person tasked with the supervision of Mr. Gleeson.

Queen Mary was very appreciative of their efforts. The fan was used by the Queen when she visited India during the Durbar celebrations in December 1911. This formal ceremonial gathering marked King George V’s succession as King Emperor of India.

This fan featured in the exhibition titled -

On November 15 2011 Paul Ettlinger applied to patent Improvements in Sovereign and other Coin cases. 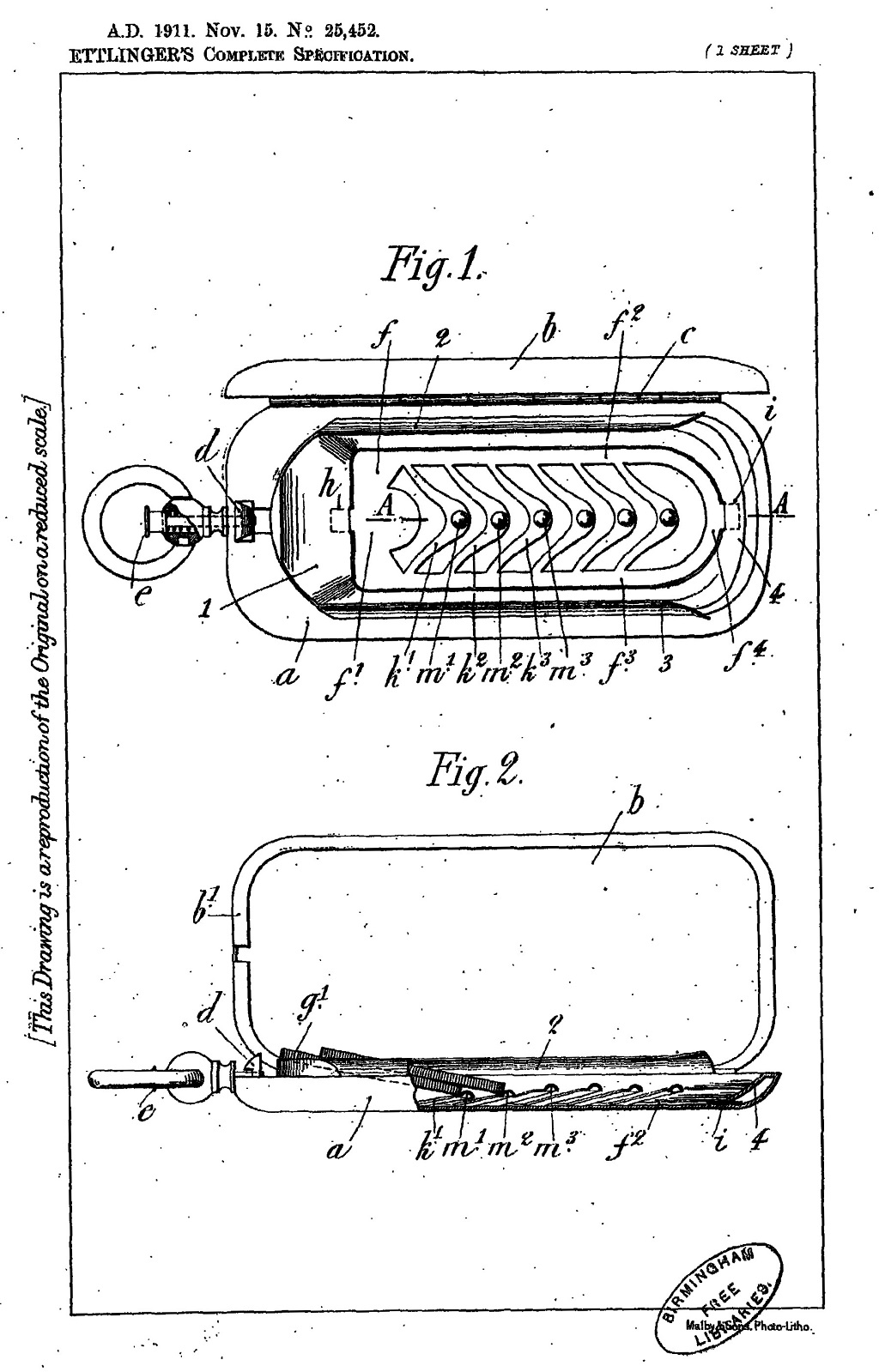 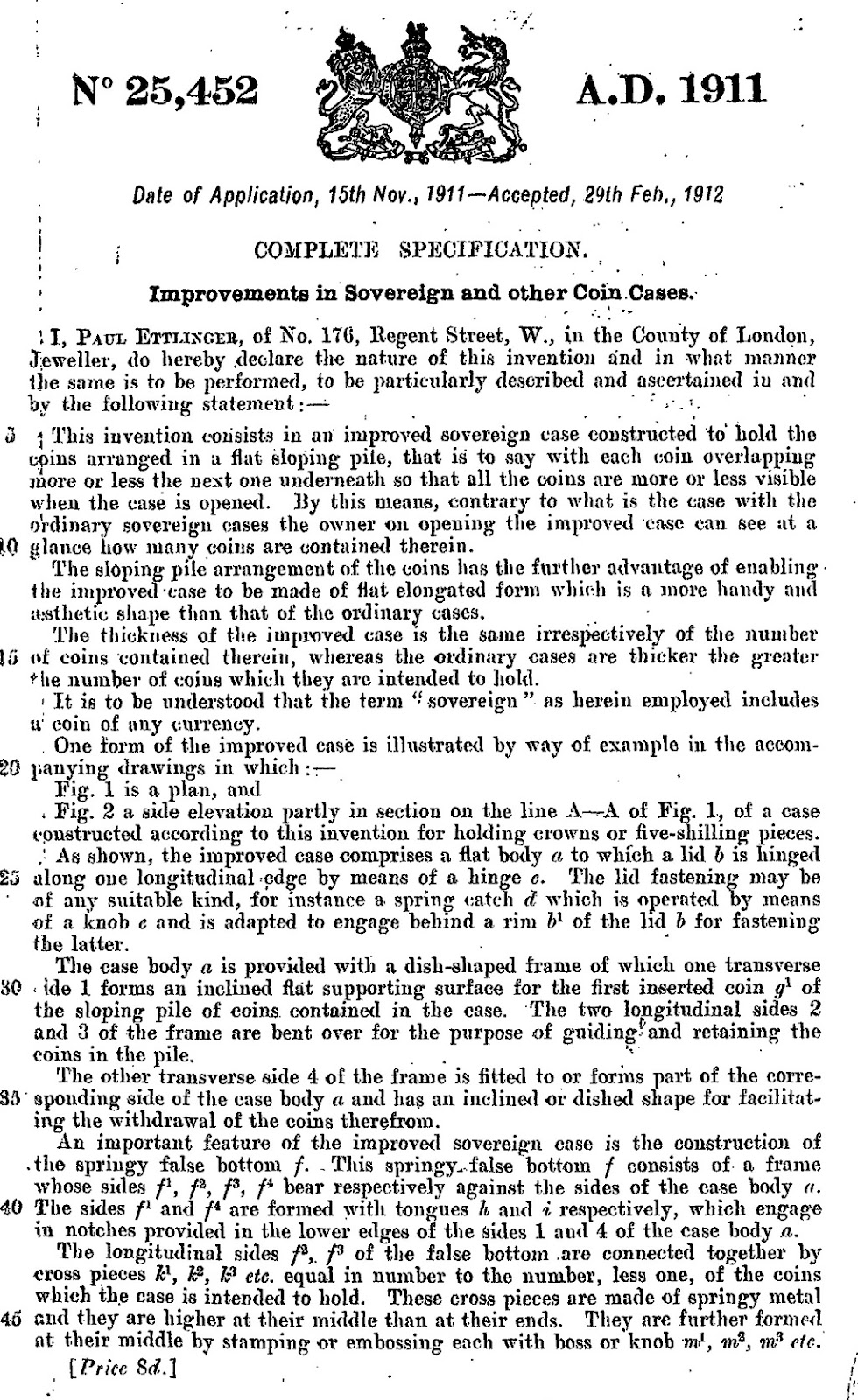 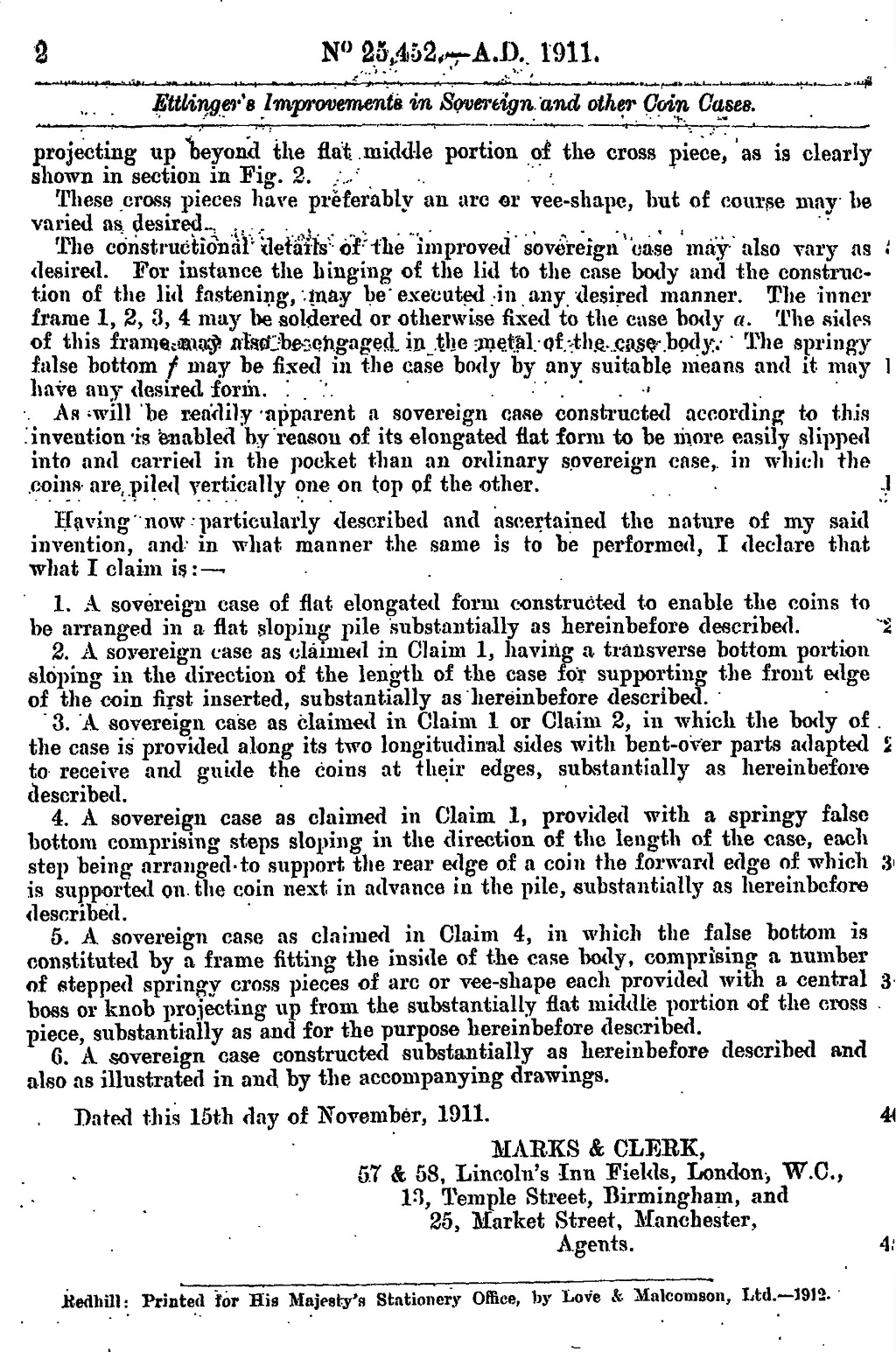 PATENT 191125452
Unfortunately this business was targeted by criminals.
The raid was described in The Sydney Morning Herald 3rd April issue 1912


JEWELLERS' SAFE OPENED
VALUABLE GOODS REMOVED
London, April 1. Burglars entered, through a skylight, a shop adjoining Messrs. Ettlinger, jewellers, in Regent-street. They then cut huge holes in three walls into the jewellery establishment, apparently intending to remove a safe, but finally prized it open, and stole £13,000 worth of jewellery.
April 2. The thieves, who bored into the jewellery establishment from the premises of a firm of artistic fabric dealers, took a quantity of dress materials and cushions with which to deaden the sound of their tools. The robbers abandoned several electric motors, which had formed part of their automatic electric drilling outfit.