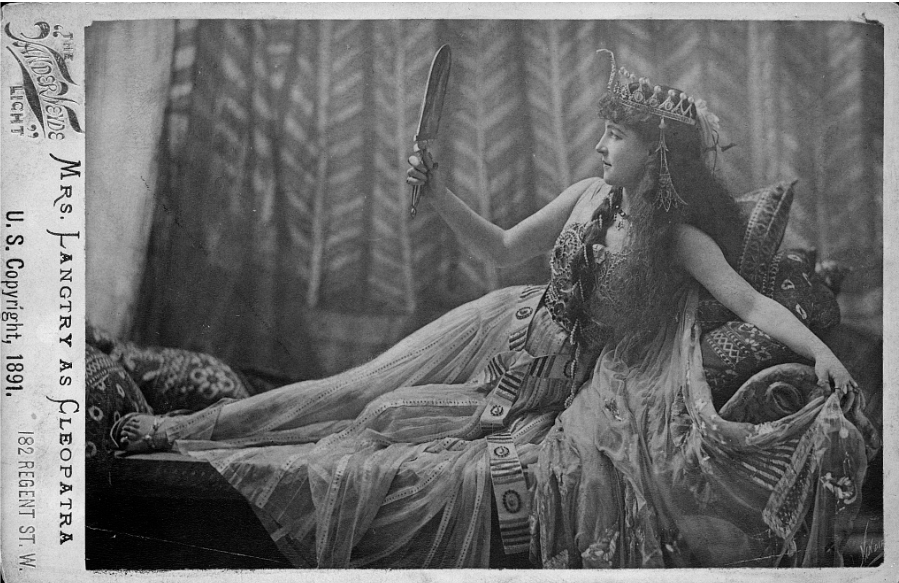 There has been a fascination for ancient Egypt for hundreds if not thousands of years.

William Shakespeare’s play Antony and Cleopatra was first performed by the King’s Men in London c.1607. The plot is based on Thomas North's 1579 translation from Plutarch's Lives. Plutarch (c. AD 46 – after AD 119) was a Greek historian, philosopher and a priest at the Temple of Apollo in Delphi.

In recent history interest in the rituals, architecture and customs of the Ancient Egyptians was increased significantly by the Napoleonic War in the Middle East.

France was at war with Britain. At this time Britannia really did rule the waves and France sought to end Britain's dominance of the seas and trade routes with India. If France could conquer Egypt it would be able to expand its influence in the Mediterranean.

Napoleon Bonaparte was given command of the mission. Napoleon led French forces into Egypt in 1798 to fight against the Ottoman rulers who were known as the Mamluks. The French won the battle against the Mamluks by holding their lines in a square formation and firing at the charging Mamluks at close range.  Although they won the battle they did not win the war due to the intervention of the Royal Navy.

Rear-Admiral Horatio Nelson led the Royal Navy in the Battle of the Nile which was a major naval battle fought with the French at Aboukir Bay from the 1st to the 3rd of August 1798. The British fleet won the battle decisively when the French gunpowder boat L’Orient was destroyed by the Franklin. The 120 gun ship, L’Orient, was Vice-Admiral Brueys' flagship. L’Orient was destroyed a couple of hours before midnight. The massive explosion rocked the other ships, killed the Admiral and most of the ship's company. The Franklin narrowly missed destruction, as the explosion sent flaming debris high up into the air.

Napoleon took scientists, botanists, artists, engravers and architects on this military campaign. These men were officially known as the Commission des sciences et arts d’Egypte. Although his military campaign was seen as a failure, the scientific expedition was seen as a great success, as it produced the first complete scientific survey of Egypt. The Description de l’Égypte detailed Egyptian antiquities, language, natural history and way of life, including agriculture, customs, music and dress.

By 1801 the war was over. The fascination for ancient Egyptian culture was fuelled by the drawings, engravings and descriptions by the Commission des sciences et arts d’Egypte. 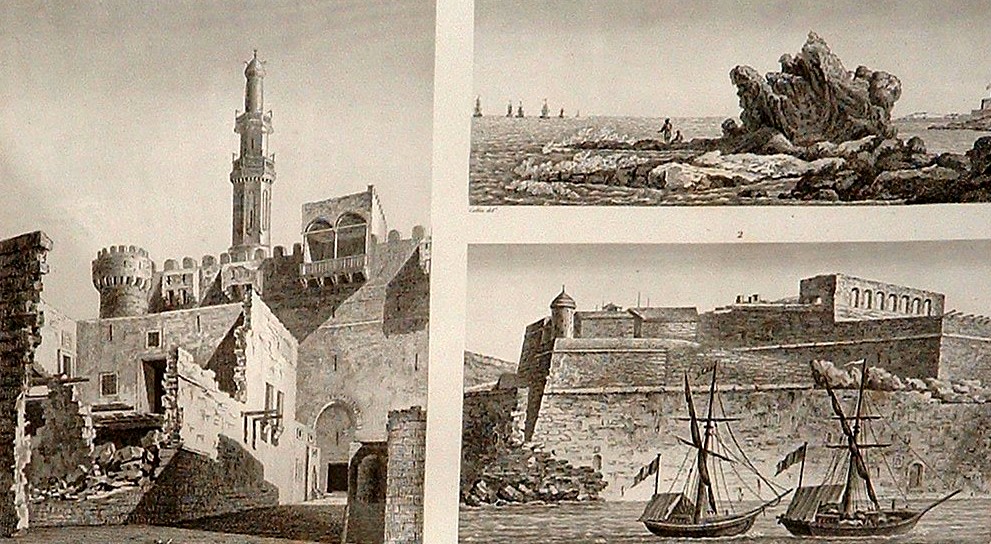 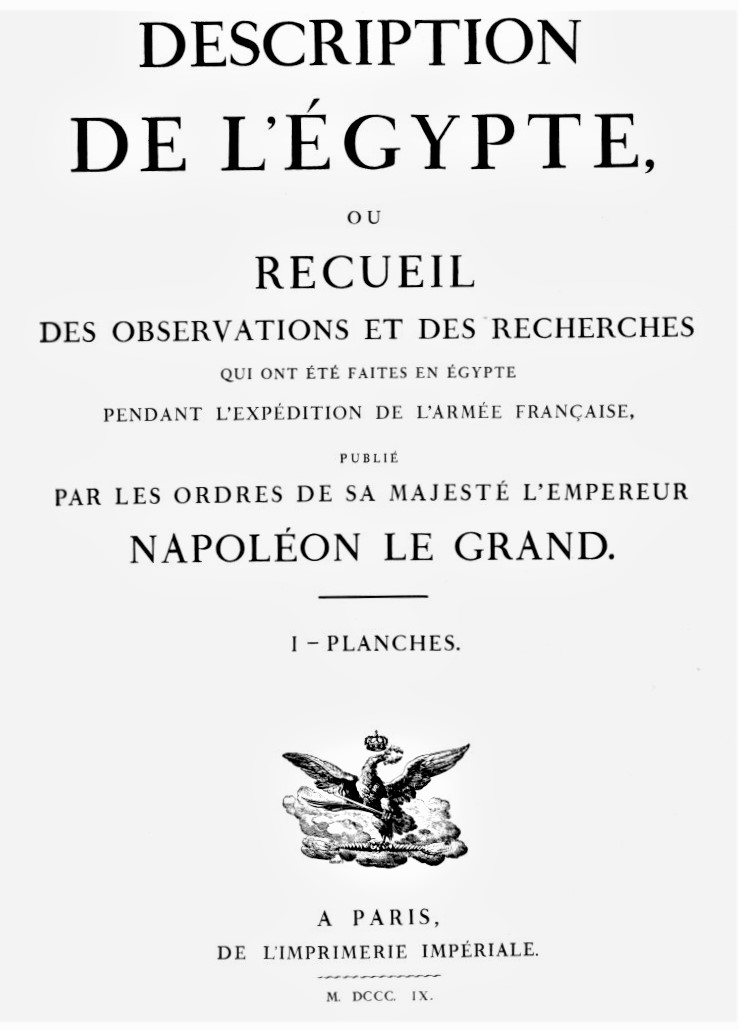 The cover of the publication reads as follows -


All over Europe, Britain & America the mania for the history of Egypt spread far and wide. This would increase when two obelisks which were gifted to Britain and America began their travels to their new homes. Obelisks were traditionally placed in pairs before the entrance of Egyptian temples.

In this year the obelisk known as Cleopatra’s Needle arrived in England after having been towed by a steamship named The Olga, lost at sea during a storm in the Bay of Biscay and then claimed by another boat (Fitzmaurice) as salvage. The British followed the dramatic journey of the needle, as regular bulletins about its journey were published in the London Illustrated News. The court case instigated by the transporters and the owners of the Fitzmaurice regarding the ownership of the obelisk caused a sensation. 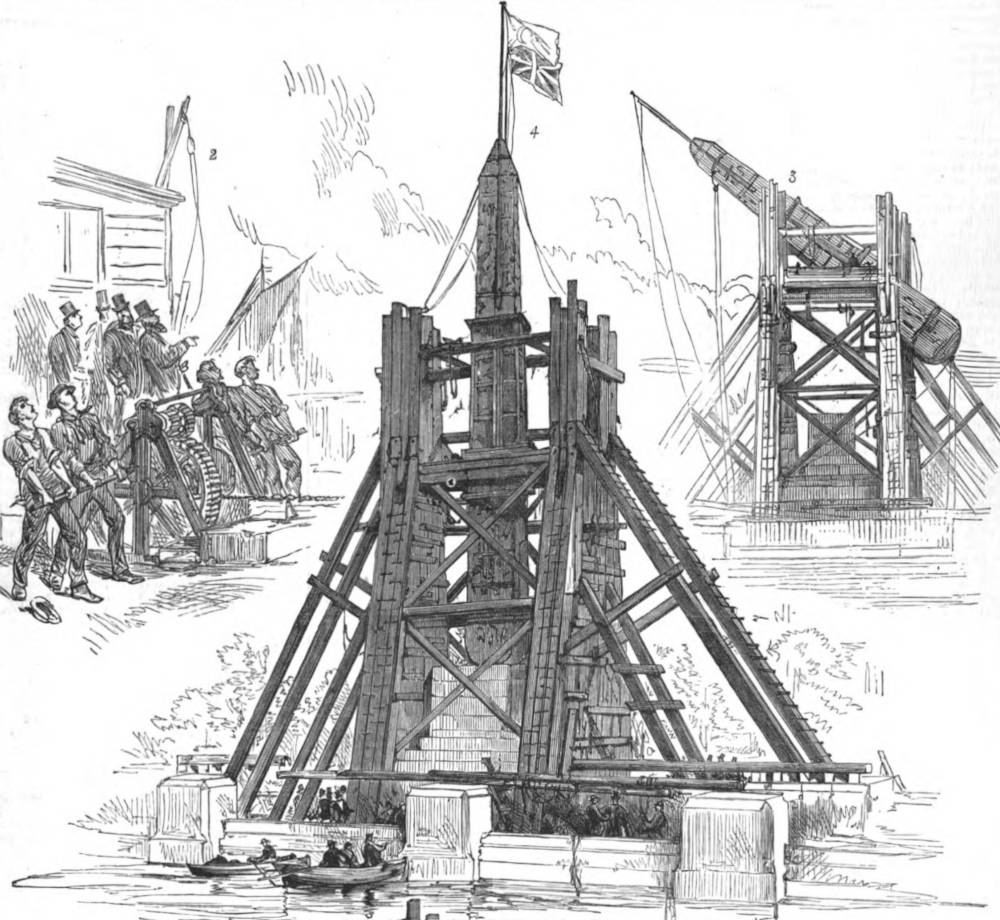 The Americans had seen how the British decision to tow their obelisk back to England by sea had almost ended in disaster and so they decided to modify the steamship SS Dessoug.

Lieutenant Commander Henry Honychurch Gorringe was tasked with overseeing the operation. The 200 ton granite obelisk was manoeuvred into place in the ship's hold by rolling it along on top of cannon balls. The obelisk arrived in America in July 1880.

The masons believed that they had a special connection with this huge granite structure and the messages contained in the hieroglyphics. The Grand Master of Masons in the State of New York, Jesse B. Anthony,  presided over the laying of the cornerstone for the obelisk which took place on October 2 1880. Tens of thousands of spectators and over 9000 masons lined the route of the parade.

The popular actress Lillie Langtry was cast as Cleopatra in a performance at the Princess's Theatre, London, 1890.

Egyptian themed mausoleums can be found in cemeteries in the wealthier parts of New York and London. Many of these magnificent structures date to the 1880s. One of the very appealing aspects of Ancient Egyptian culture was the belief in the afterlife. Victorian families who had been bereaved found great comfort believing that their relatives lived on in another dimension.

At a time when infant mortality was so high the Victorians sought comfort from their mourning rituals just as high ranking Ancient Egyptians did thousands of years before. Egyptian influences can be seen in mourning jewellery which are often embellished with obelisks and scarab beetles. The Ancient Egyptians attributed the scarab beetle with magical powers of rebirth and renewal. Many Victorians would also find comfort from Egyptian symbols and motifs.

The fascination for Egypt had not waned by the Edwardian era.

In this year Samuel Davis applied to patent a vanity box on behalf of The Cleopatra Vanity Box Company of New York (patent no. 963212 ). Prior to this application most patent applications for boxes to hold face powder were known as powder boxes, toilet powder boxes or toilet boxes. For example, the patent drawings below belong to a patent application made by Warren Hill for a Toilet Powder Box (patent no. 472217, which was patented on April 5 1892. 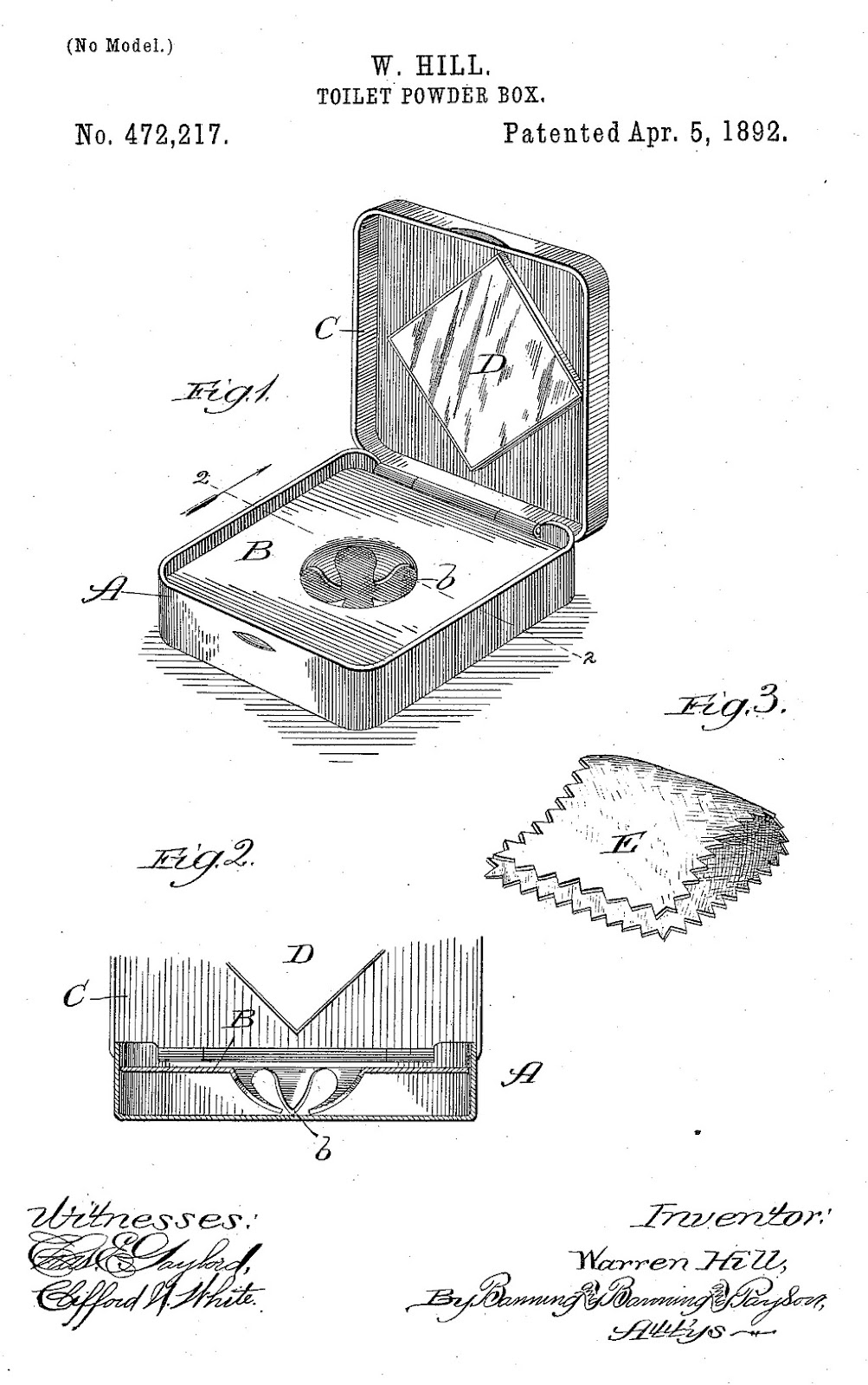 Warren Hill made the following claims. 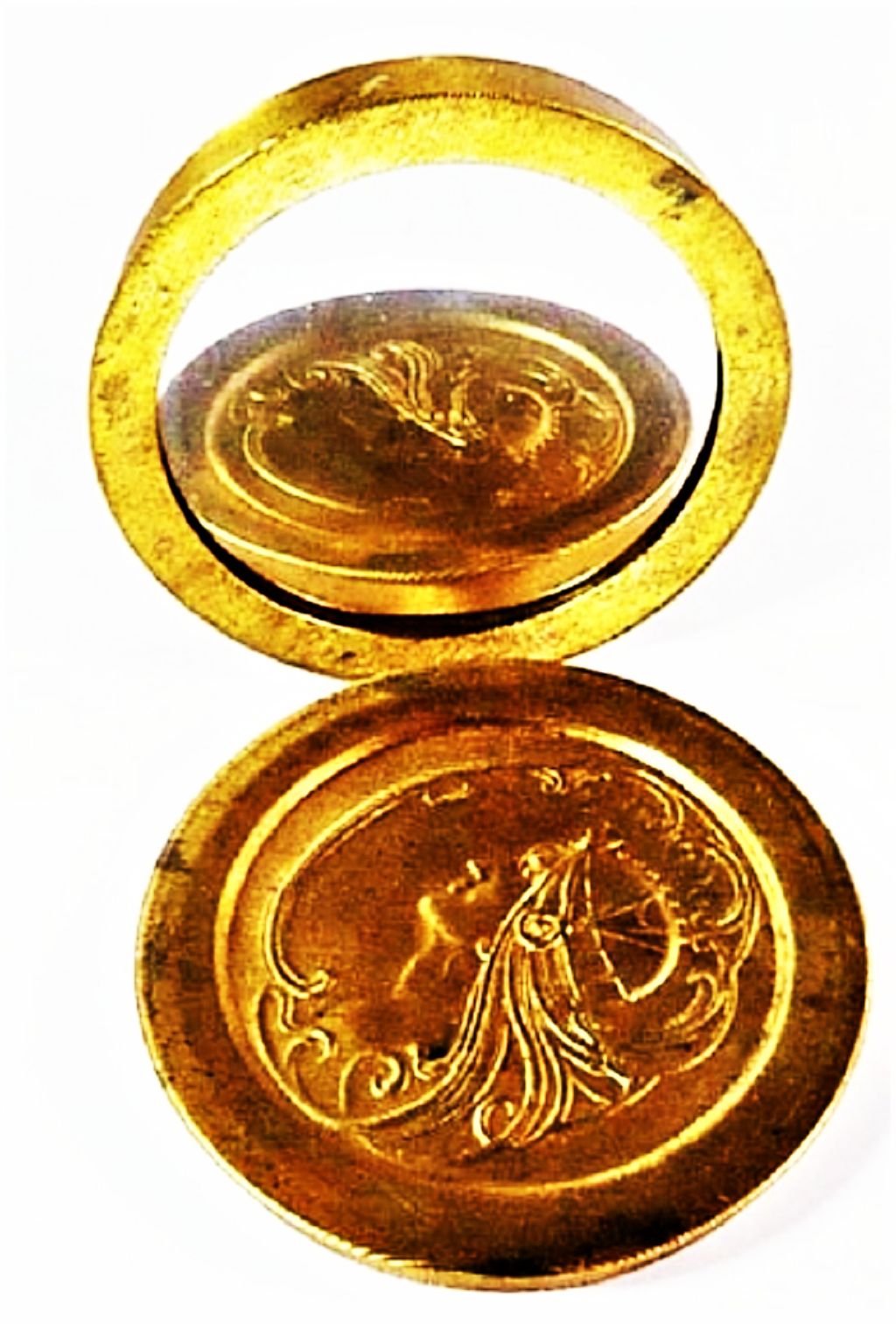 The patenting process for the vanity box invented by Samuel Davis was complete by July 5 1910. 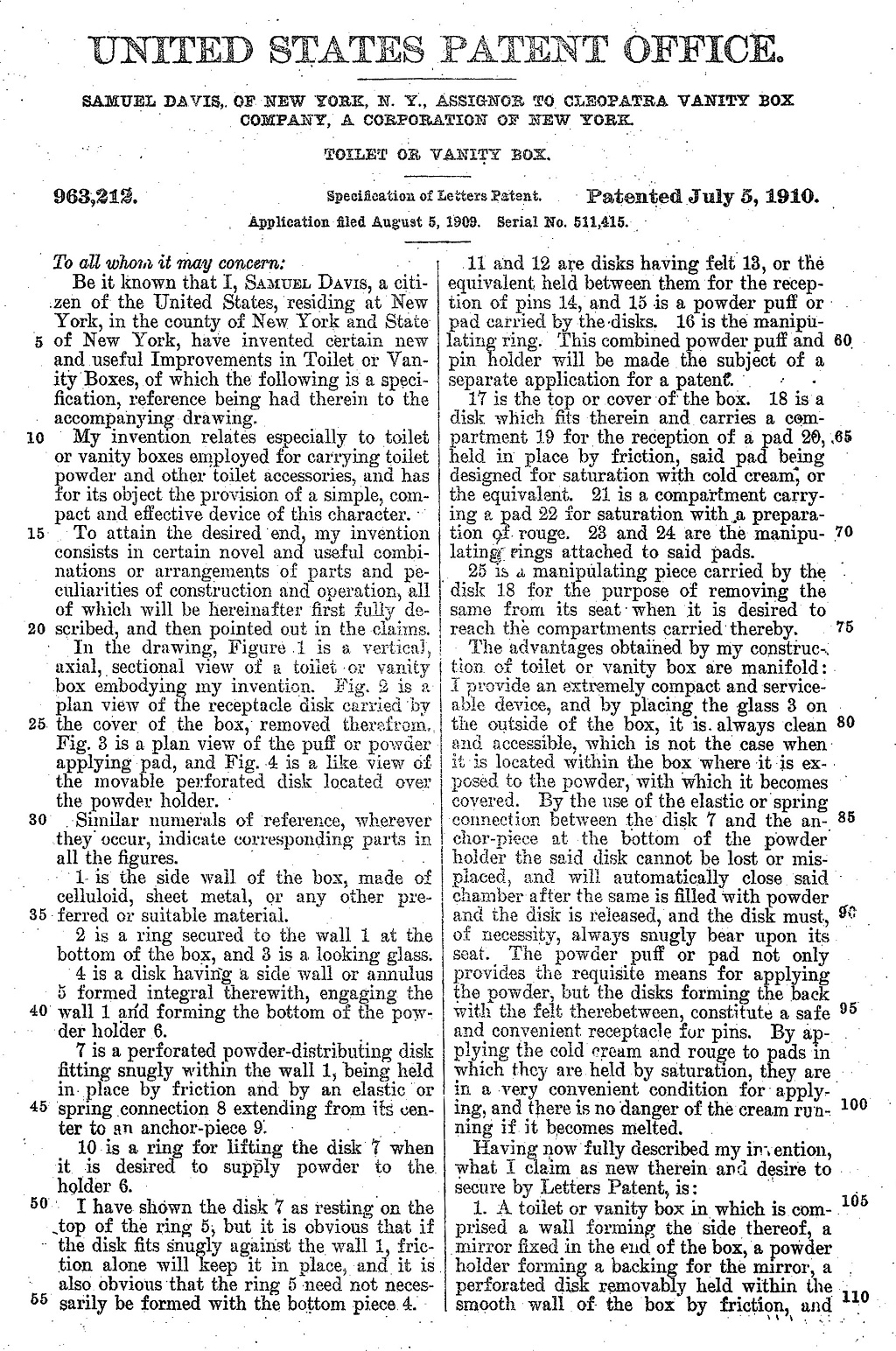 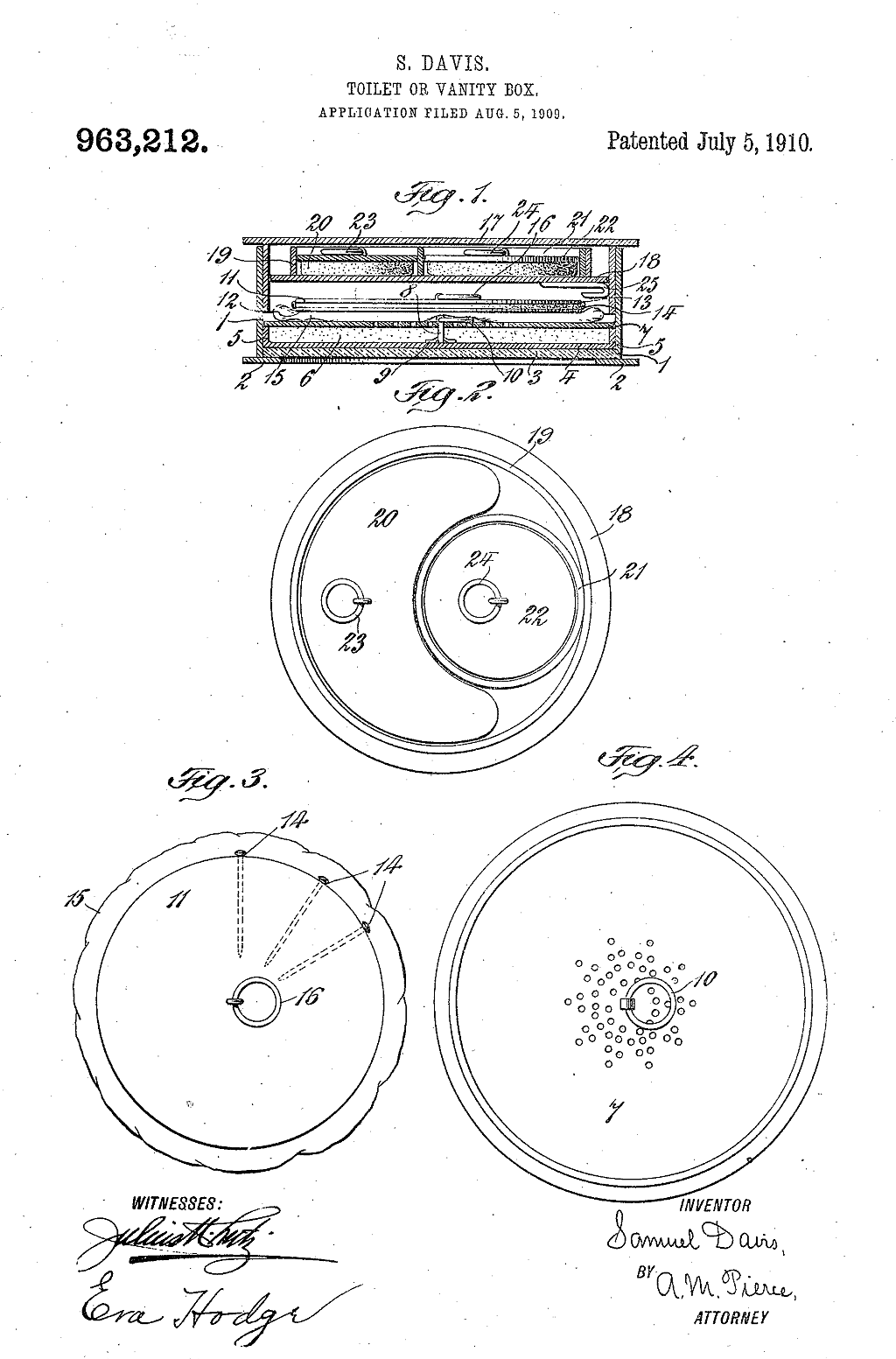 Extracts from the patent description that we found interesting or helpful: 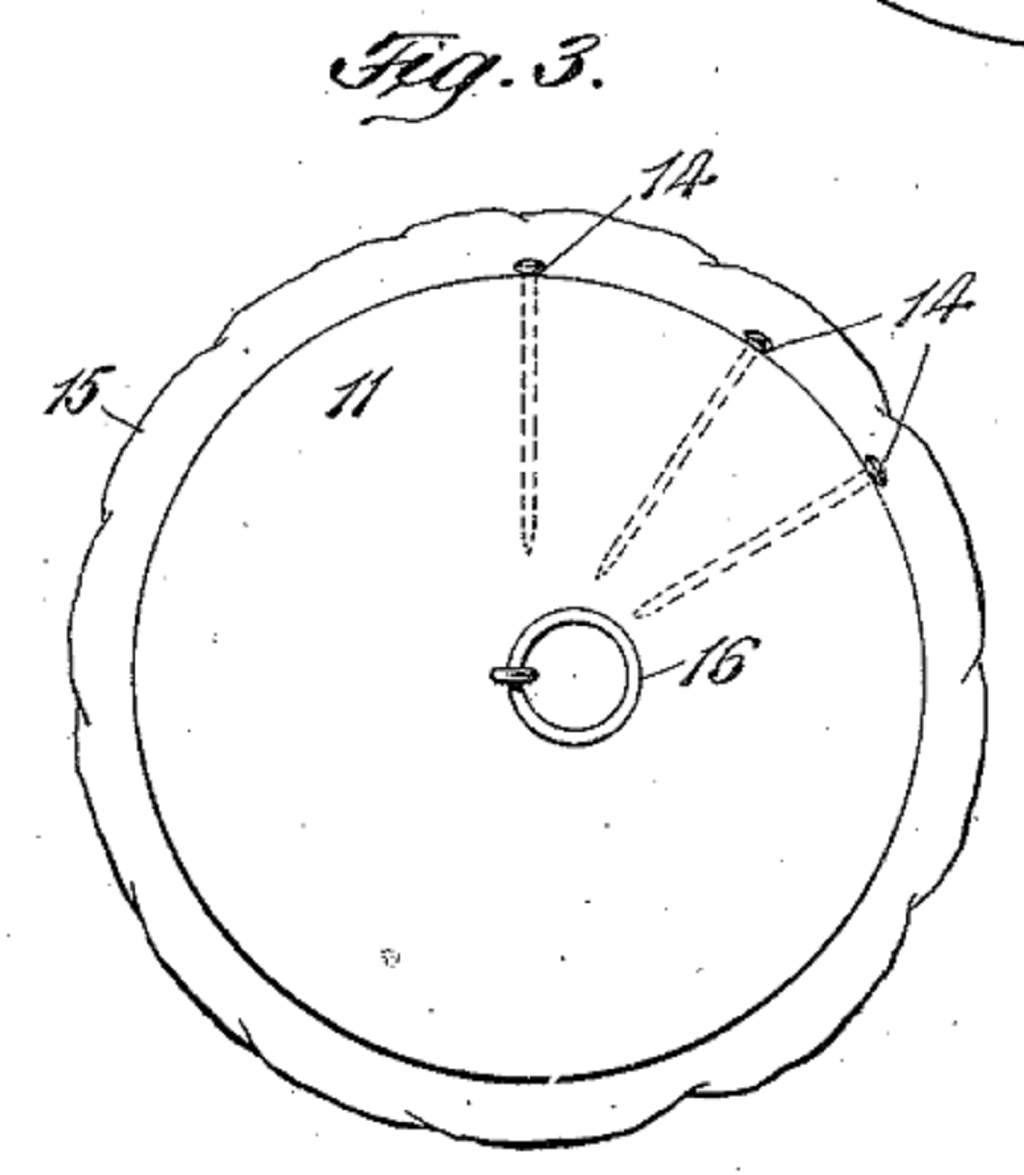 Fig. 3 is a plan view of the puff or powder application pad…
11 and 12 are disks having felt, or the equivalent held between them for the reception of pins 14
and 15 is a powder puff or pad carried by the disks.
16 is a manipulating ring.

The combined powder puff and pin holder will be made subject of a separate application for a patent.

We have not been able to find any more patent applications by this inventor. 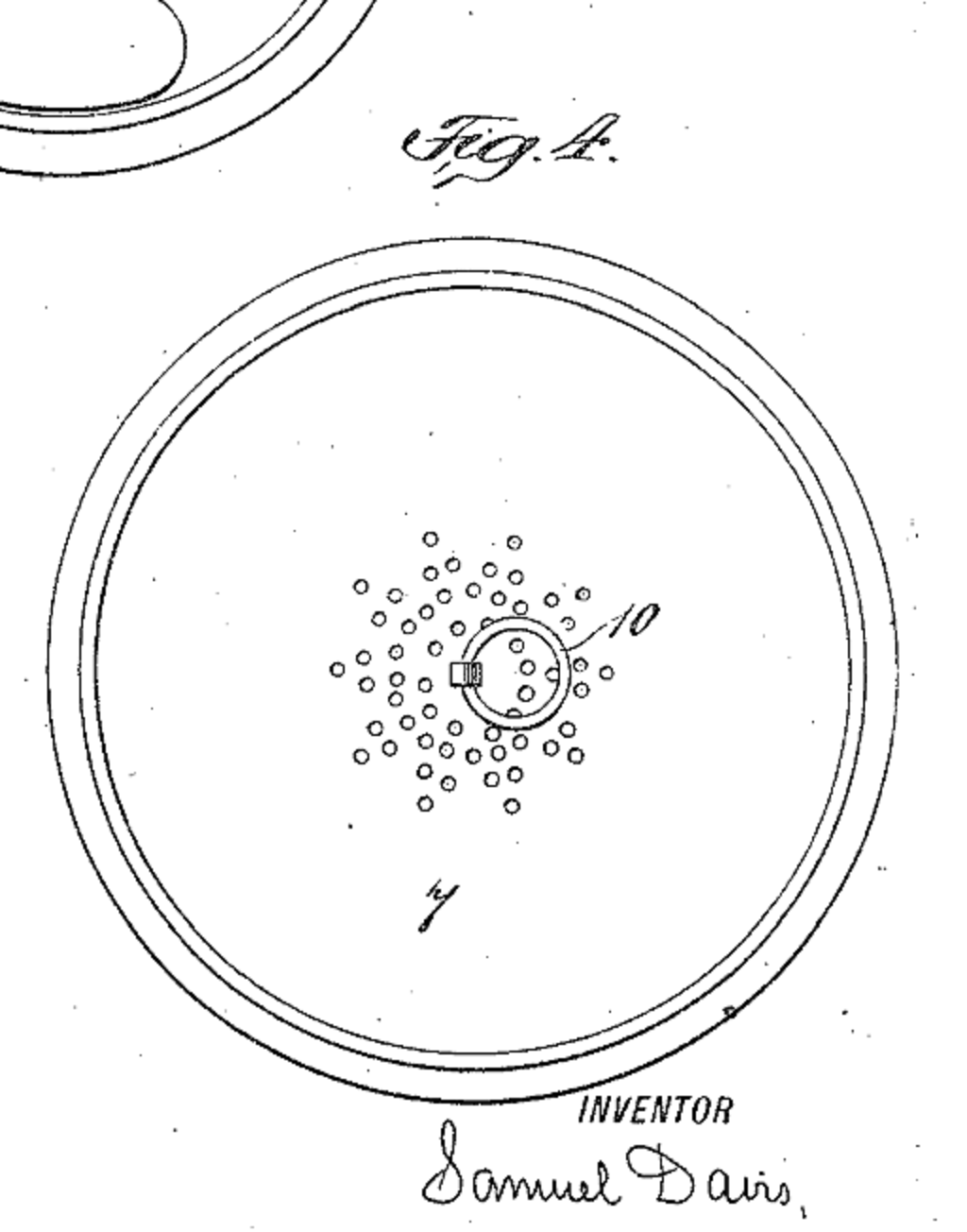 Fig. 4 is a like view of the moveable perforated disk located over the powder holder.

4 is a disk having a side wall or annulus formed integral herewith,
engaging the wall 1 and forming the bottom of the powder holder 6.
…at the bottom of the box 3 is a looking glass
21 is a compartment carrying a pad 22 for the saturation with a preparation of rouge.
The advantages obtained by my construction of toilet or vanity box are manifold:
I provide an extremely compact and serviceable device,
and by placing the glass 3 on the outside of the box, it is always clean and accessible,
which is not the case when it is located within the box where it is exposed to powder,
with which it becomes covered.

The well known compact historian, Michael Hetherington found an original instruction leaflet for this model which states the following -

To refill: remove perforated disc by means of the ring loop;
put a teaspoonful of powder in box and shake down well;
then replace disc. Keep mirror side up when opening this box.

Harvard Museum of the Ancient Near East