Historical And Patent Information About The Pygmalion Brand Compacts

Research carried out by powder compact specialist Juliette Edwards reveals that the Pygmalion name was owned by British company S. D. Rand Ltd., which was based in London. The Pygmalion brand name was registered for cosmetic boxes by Salo David Rand in 1942. S. D. Rand Ltd was incorporated in 1949. 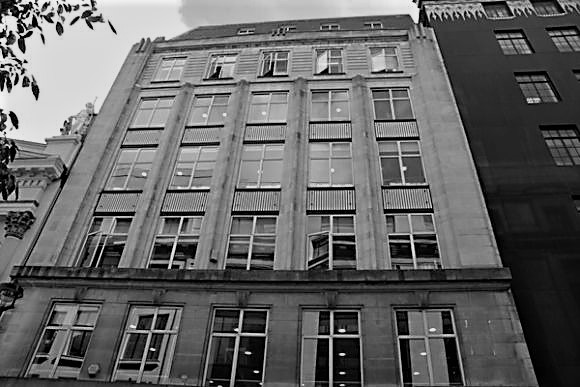 Salo David Rand's principal business premises were located at 5-6, Argyll Street, Oxford Circus, London, W 1. Oxford Circus is a road junction connecting the highly prestigious areas of Oxford Street and Regent Street in the West End of London. The junction opened in 1819 as part of the redevelopment of Regent Street which was masterminded by John Nash.  The area was originally known as Regent Circus North. Many of the impressive buildings on Argyll Street are Grade II listed buildings. The word circus in this instance does not relate to fair grounds. The many references to the word circus in London locations comes from the Latin root 'circ', for circle, as these junctions are intersections of so many roads that they become circular, hence circus.

Rand has often been described as being a businessman who commissioned companies to make powder compacts, vanity sets and accessories for his Pygmalion brand. Rand’s firm would finish the vanities and package them in boxes proudly displaying the Pygmalion brand name. London souvenir compacts were very popular in the mid-twentieth century. In the 1930s, 40s and 50s feelings of patriotism were very strong in many parts of the British Isles and so gifts which featured the royal family or famous landmarks were much in demand. Although production of luxury products would have mostly ceased during World War II (1939 - 1945) is it sometimes possible to find powder compacts which were crafted during or immediately after the war which depict the capital city in the war years. This Pygmalion brand loose powder compact was made in the 1940s. The pictorial inlay is intriguing. The red buses are Wartime London AEC RT Buses. They are depicted in full wartime livery with regulation blackout lighting. Typical English made rotund and sturdy cars can also be seen. Gentlemen in suits on their way to work are walking along Westminster Bridge. In the background the imposing sight of The Houses of Parliament. Around the pictorial inlay is a gilt engraved border. The powder compact has an inner lid engraved with a complex guilloche design. The mirror bezel is inscribed MADE IN ENGLAND. The original leatherette puff is signed Pygmalion.

The globe compacts with an impressed map of the world are some of the most iconic Pygmalion vanities.

The Globe is included in a Pygmalion/Rand advertisement of February 1951. The tagline of Latest Pygmalion Creations and the enchanting images gave the viewers a tantalising glimpse of highly inventive vanities which were marketed as luxury gifts. Other models in the globe series feature various patterns on their metal exteriors.

Advertisements featuring Pygmalion products appear to cease in the mid 1950s, making it a very short-lived company. Although S. D. Rand patented various designs of vanities, his company was principally focused on importing, finishing and selling compacts, rather than manufacturing them. One of the most sought-after Pygmalion compacts is the gold and silver tone globe.

This delightful two tone version of the Pygmalion Globe Compact Map Of The World is presented with the original box, pouch, puff and sifter. The countries are decorated with a golden lacquered finish. The seas and oceans are shown in silver tone with a satin-like finish. Each country, the seas and oceans are all stamped with their names. The lines of longitude and latitude are also shown. The whole item has been crafted with great attention to detail which is typical for the Pygmalion and Kigu brand ﻿Globe Map Of The World ﻿novelty powder compacts. The example shown above appears not to have been lacquered and as a consequence it has acquired the most gorgeous patina. The compact is a deep golden brown.

The interior powder well of these models is stamped -

We have not been able to find this patent yet but we will add it to this blog if we do.

Scroll down to see some of S. D. Rand's patented designs and their patents. We know that Rand was a prolific inventor and that some of the most iconic vanities were his inventions.

The patent applications and drawings shown below were submitted by Salo David Rand on August 23 1948.

He described this design as -

﻿This invention concerns hand-operated indicators and has for its object to provide such an indicator in combination with an article of the kind which is carried on the person, thus a pocket or handbag mirror, a cigarette case, a handbag, a powder compact or the like. 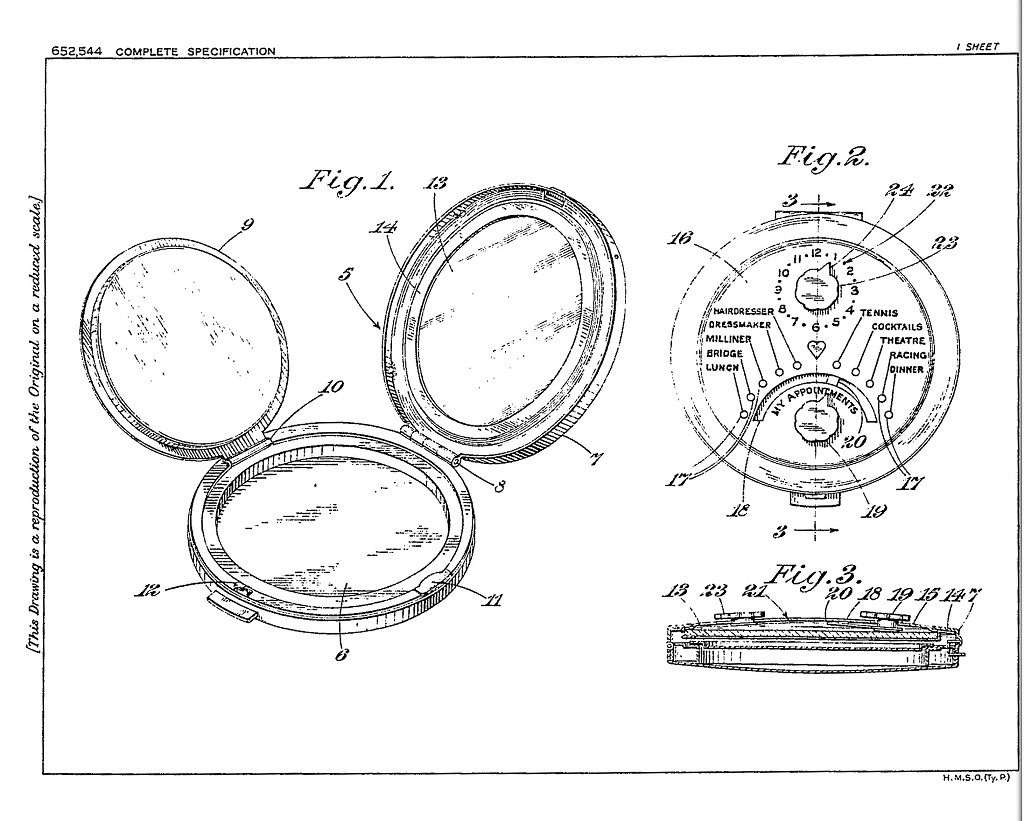 Information from the patent application which we found interesting:
Figure 2 is a plan view showing the top of the case of the compact of Figure 1, and Figure 3 is a section on the line 3----3 of Figure 2

A backing plate 15 is provided for the mirror 14 and is spaced from the back thereof. As is clear from Figure 3 the backing plate 15 is clamped between the mirror 14 and the lid 7.
The backing plate 15 is of transparent material and constitutes the top of the case of the compact
The inner surface of the plate 15 (that is the surface nearer to the mirror) carries a list of appointments as at 16 and a mark 17 is associated with each appointment.
As shown in Figure 2 the list of appointments 16 may, for instance, comprise the words Lunch, Bridge, Milliner, Dressmaker, Hairdresser, Tennis, Cocktails and so on which are spaced around a part circular window 18.
It will be understood that the list of appointments 16 may be indicated by symbols or marks instead of words. Thus, in Figure 2 there lies between the two lists a heart 25 to symbolize a further appointment.
Note:
At some points in the patent application the mirror is referred to as 13 and in other sections it is listed as 14.
From looking at the enlarged patent drawing shown above we think that the mirror is 13 and 14 is the mirror bezel.
This observation is confirmed by this paragraph in the patent application -
The lid 7 is provided with a mirror 13 which is retained in the lid by a ring 14 in any known or convenient manner. 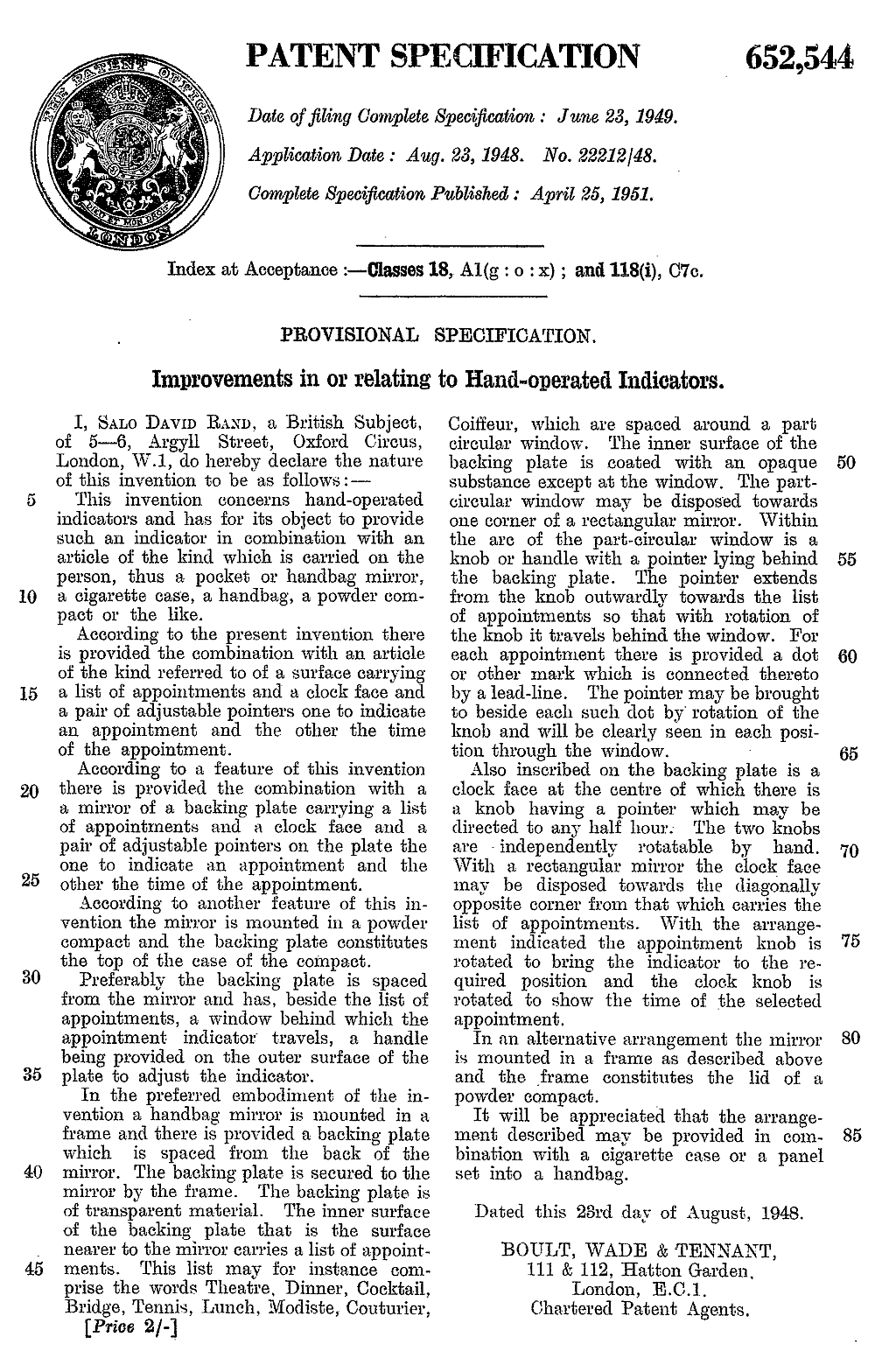 IMPROVEMENTS IN OR RELATING TO HAND-OPERATED INDICATORS 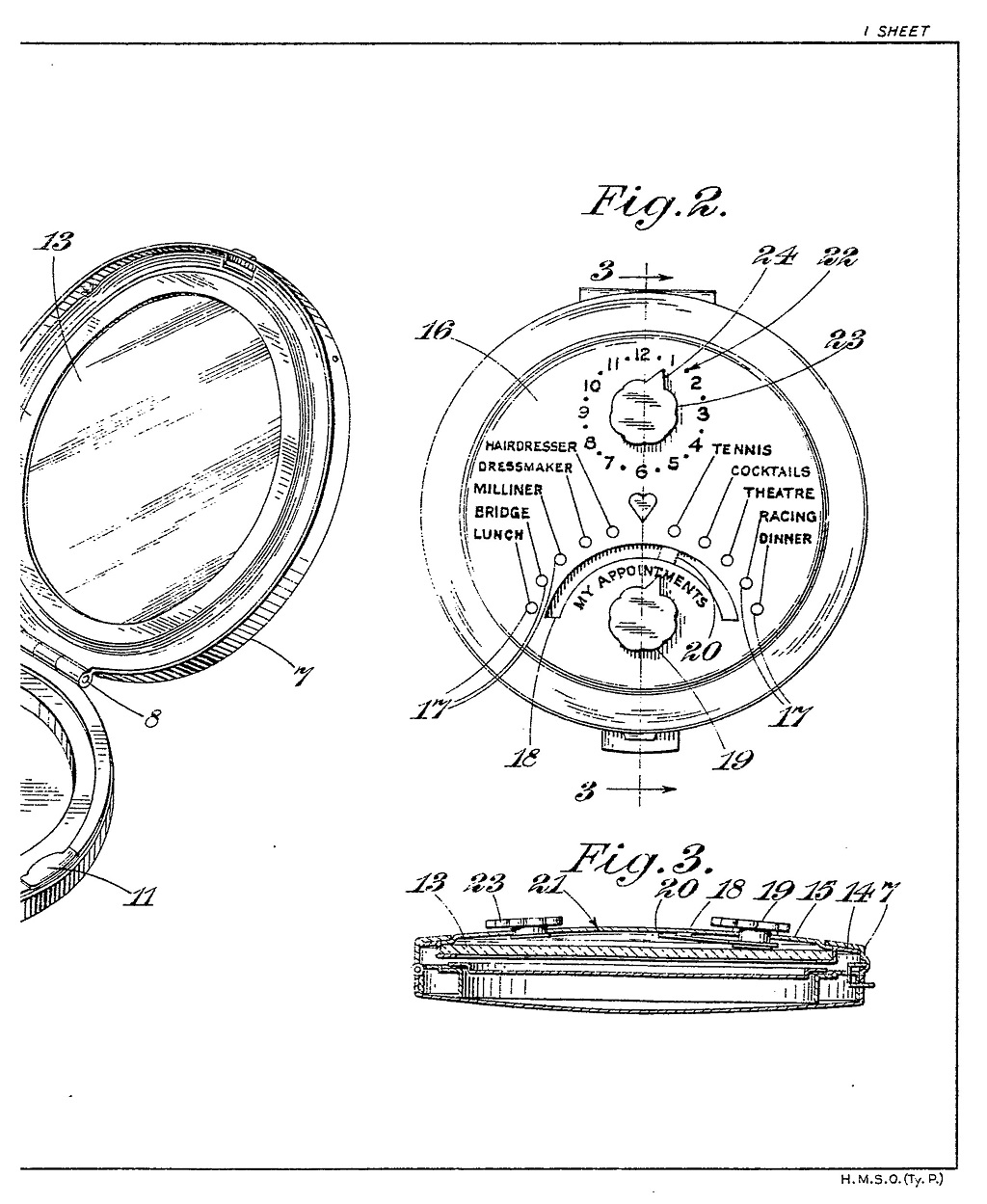 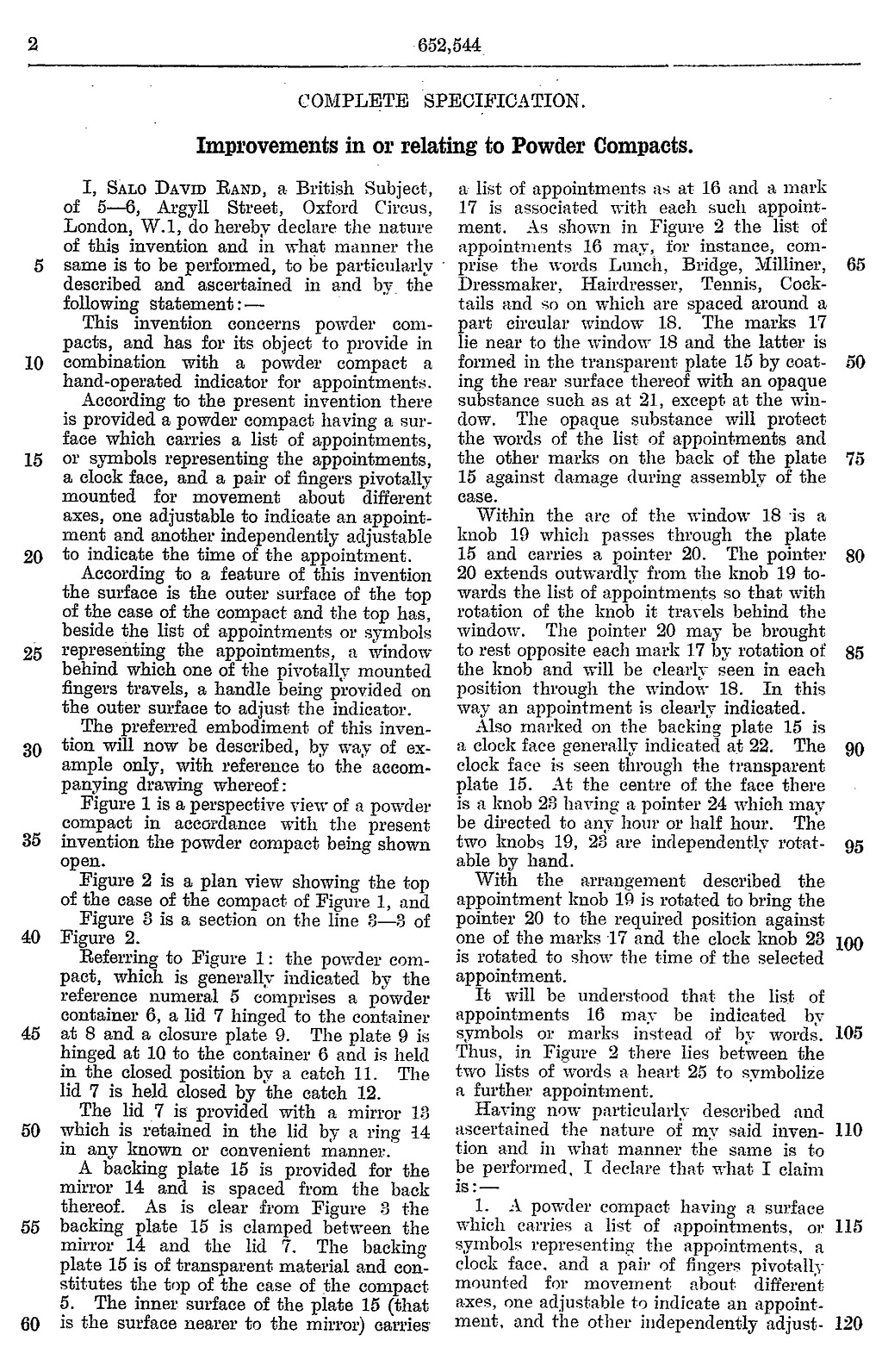 S. D. Rand lodged patent applications for novelty powder compacts, including one that looks remarkably like the Petit Boudoir - a little table with legs and an internal powder compartment. 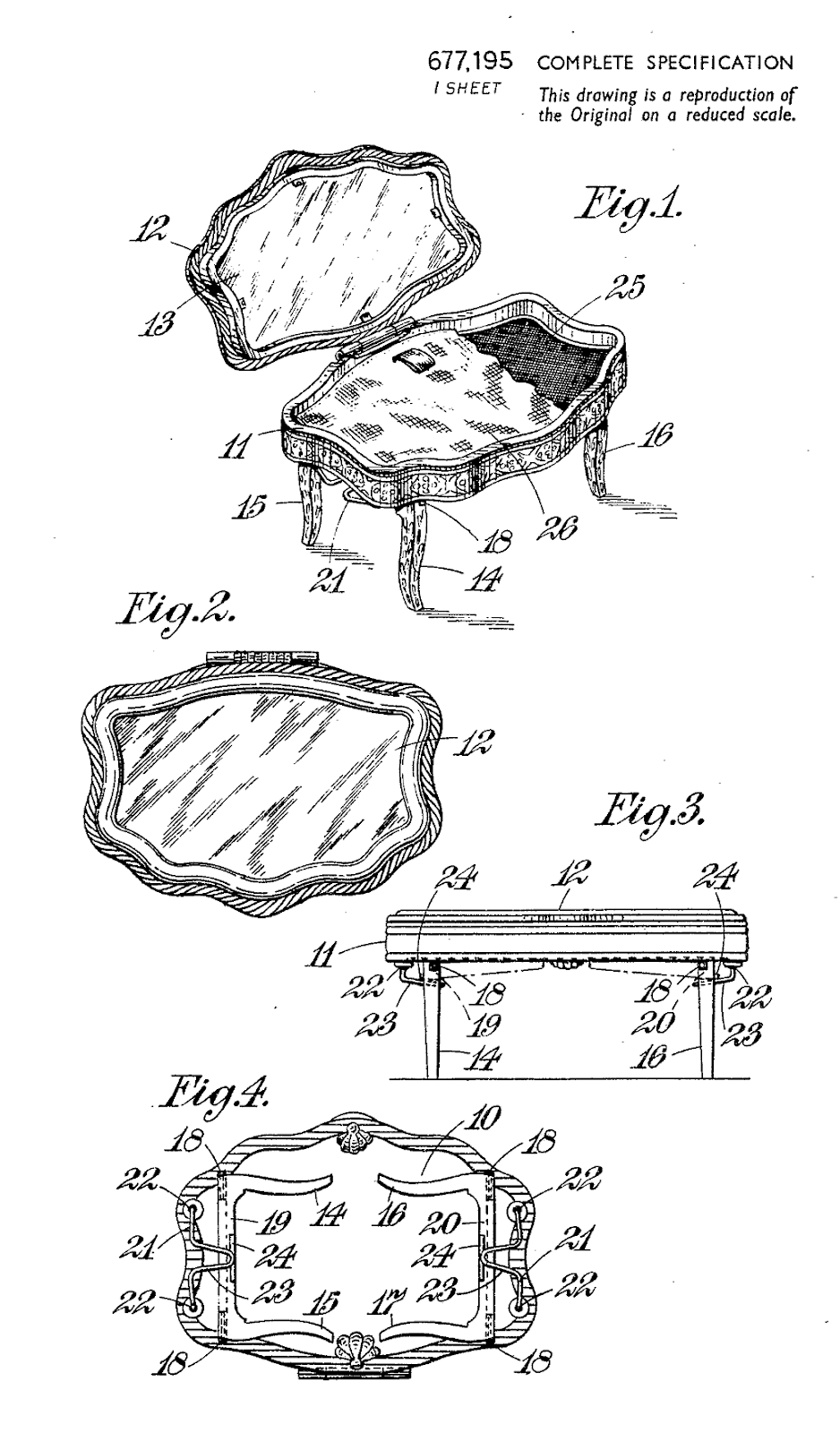 Improvements in or relating to powder compacts
Abstract

Another one of S.D. Rand's patent applications was for a clear dome to cover artificial flowers located in the lid of a loose powder compact. 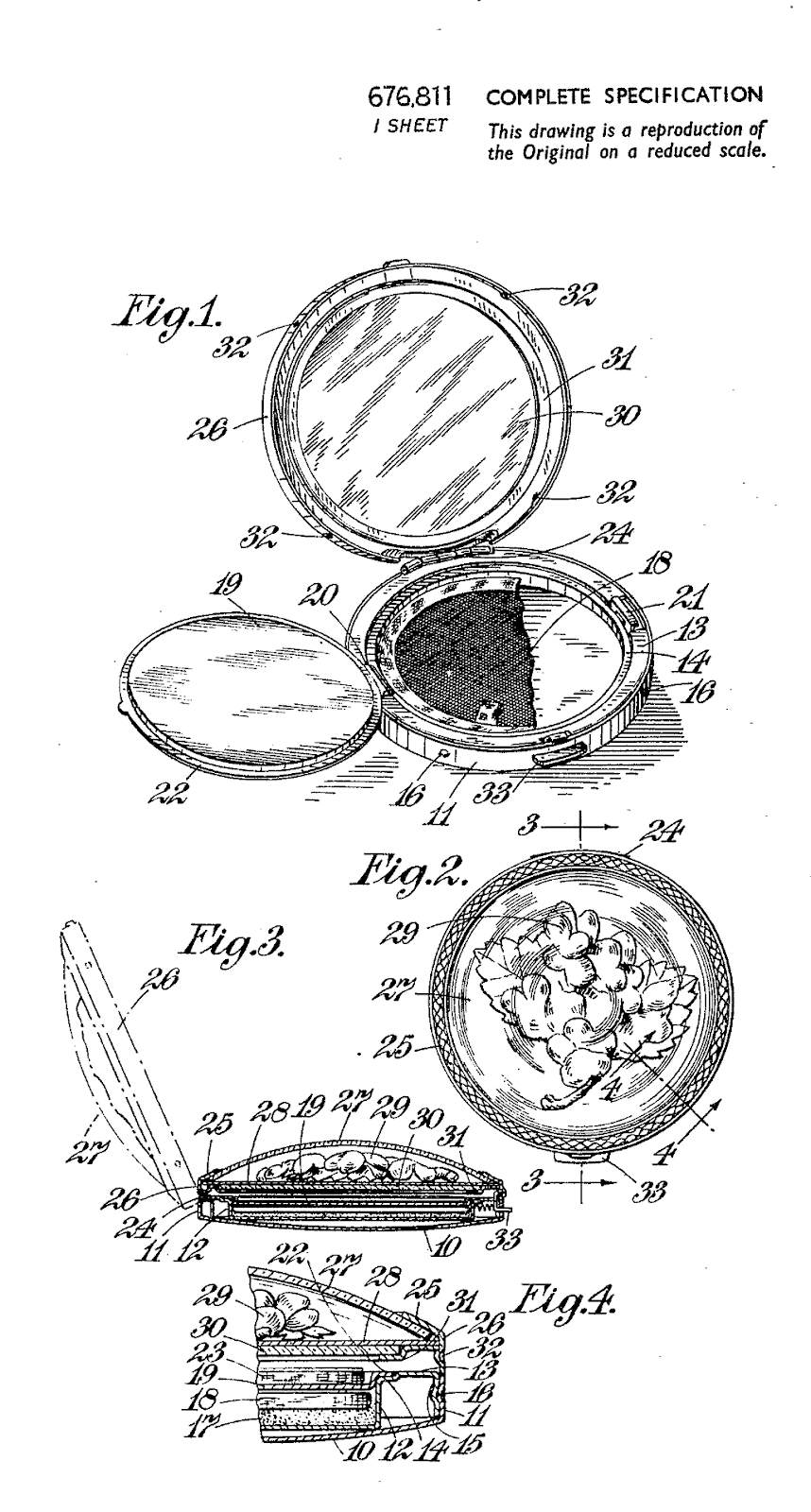 Improvements in or relating to powder compacts
Abstract This charming Pygmalion novelty basket loose powder compact has not been used. Under a Lucite dome on a background of emerald green glitter foil sit delightful silk flowers. The exterior case is deep gold and decorated with the most gorgeous and complex engine turned design. VINTAGE NOVELTY POWDER COMPACT
The design features a functional handle which is engraved in such a manner that it resembles a wicker basket. The lacquer applied during the manufacturing process gives the brass a protective layer which ensures durability and prevents oxidation. The puff has a salmon pink felt top and a pale pink sash. The sifter is the card edged type where the mesh is sewn onto the card to make it rigid, so that it  forms a snug fit in the powder well. It is neatly sewn with clean cream silk thread which also holds the cream silk tab in place. Measures 2 1/4 inches diameter. Weighs 68.4 grams.

The well known Pygmalion Sonata piano shaped novelty compact was also patented by S. D. Rand. At the time of this patent application the firm was also located at Carnaby House, 29 Beak Street, London, W1. From later patent applications we can see that the business address of 5-6 Argyll Street, Oxford Circus, London was still being used. 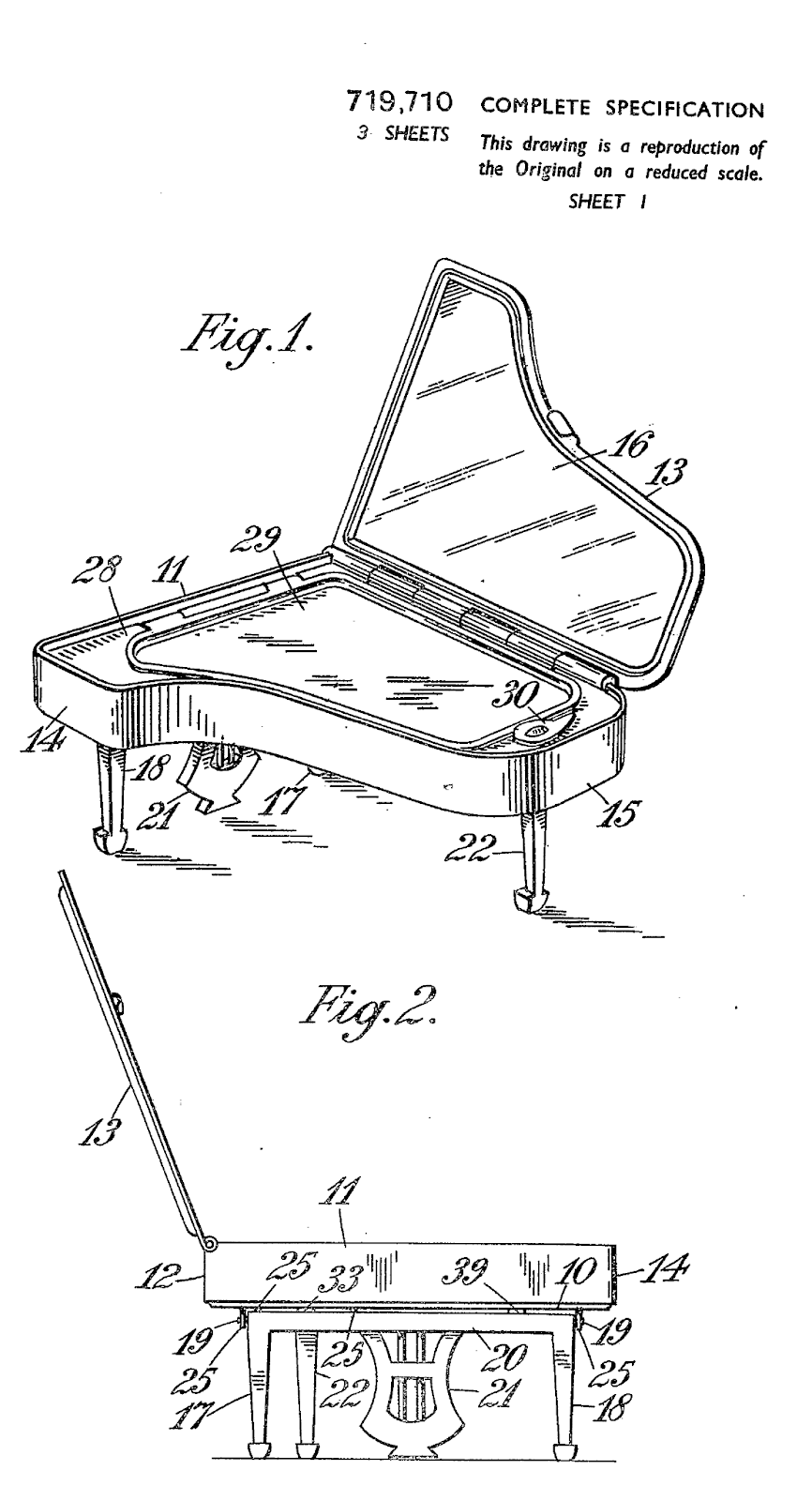 Improvements in or relating to powder compacts

Rand purchased part finished vanities from England, Germany, Austria and Japan. Kigu Ltd. manufactured globe and basket shaped compacts for S. D.  Rand. The owners of Kigu Ltd. liked these vanities so much that they began making their own globe and basket compacts. The rim of the powder well wall of the Kigu brand novelty compacts was often stamped Bouquet.

S. D. Rand's London based firm was not in business for long. It is known they were finishing & selling compacts in the 1940s & 1950s. In the 1950s they regularly bought novelty compacts made by  A. S. Brown & Co. Ltd., who were the owners of the Mascot brand.

The most well known of these being the highly collectible novelty powder compacts in the shape of a handbag or suitcase.

Not all Pygmalion brand vanities were classed as novelty compacts. Below is a loose powder compact with a traditional scene from country life. The Pygmalion 'Beauty Mirror' was similar in construction to a powder compact, except that a handle on a hinge would unfold. On some models the handles were made from an ivory substitute known as Ivorine, also known as French ivory.

Pygmalion perfume atomizers were also sold in the 1950s. They are stamped PYGMALION FOREIGN. Some of the atomizers were made to resemble cigarette lighters.  It is believed that some Pygmalion brand accessories were made in Germany, possibly by the makers of the Emrich brand.

On May 22 1951 S. D. Rand applied to patent a design of vanity set. The application was successful. The complete specification was published on August 19 1953.

The vanity set comprises a comb, a clothes-brush and mirror in a drawstring bag which is made of a flexible material, for example, chamois leather. 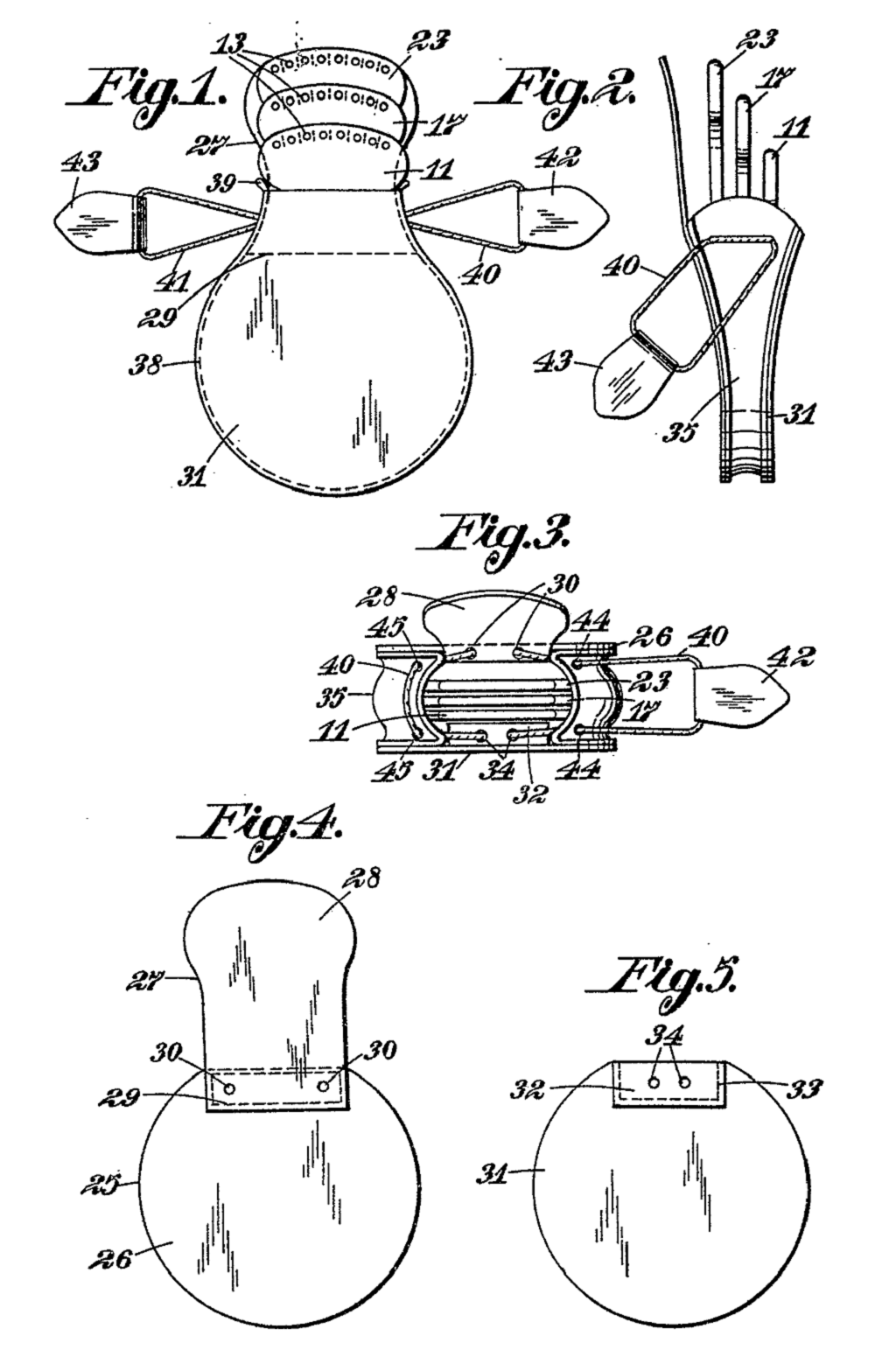 Figure 1 is a front elevation of the set in its bag.
The handles of the articles may be of different lengths so as to enable them to be readily and individually withdrawn from the bag.
The handle may be provided with a suitable decoration comprising a number of brilliants 13.
The comb handle 23, the clothes-brush handle 17 and the handle of the mirror 11 fit snugly into the vanity bag, as they are flat and relatively slender. 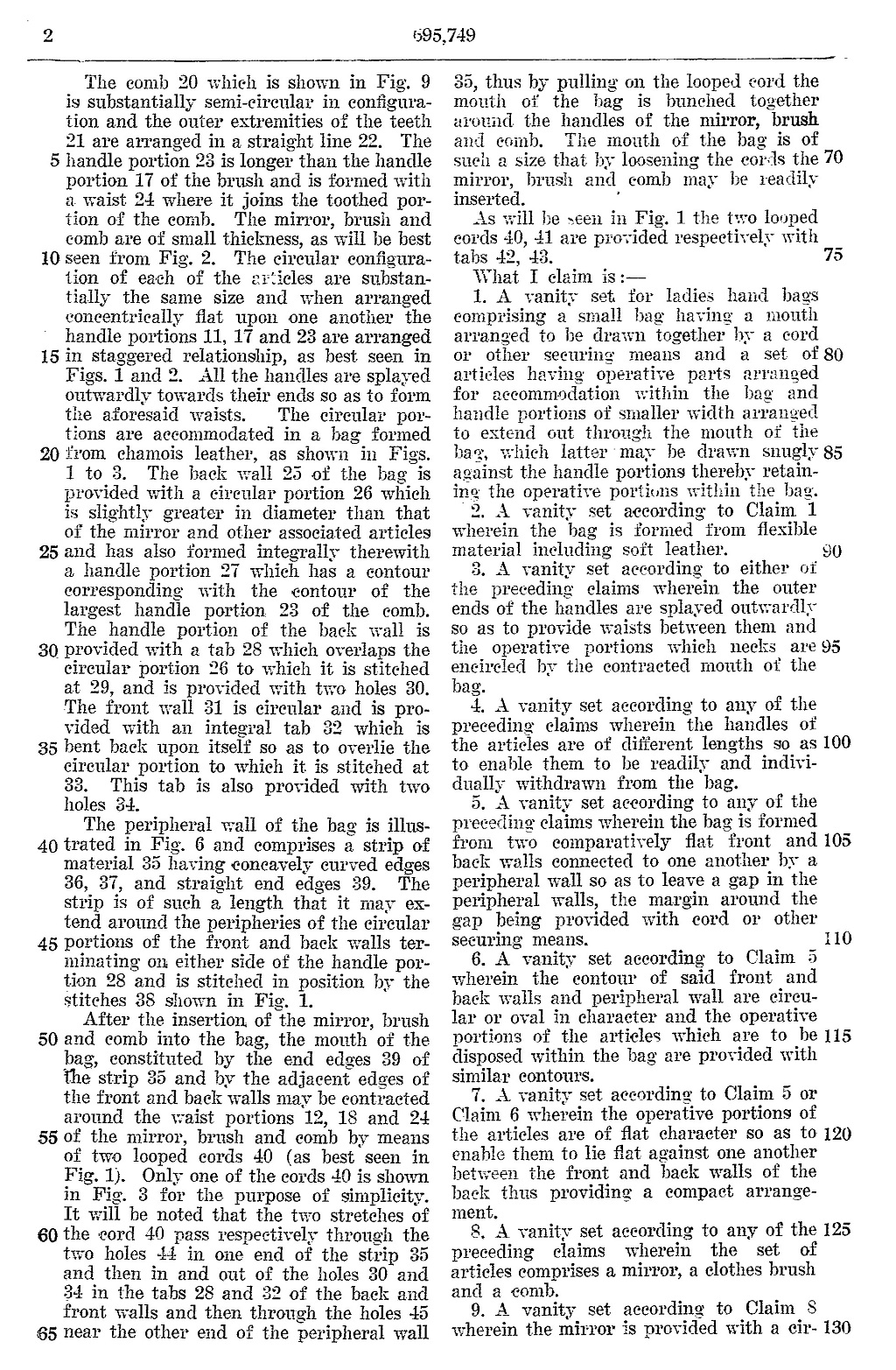 On January 28 1953 Rand had another patent complete specification published. 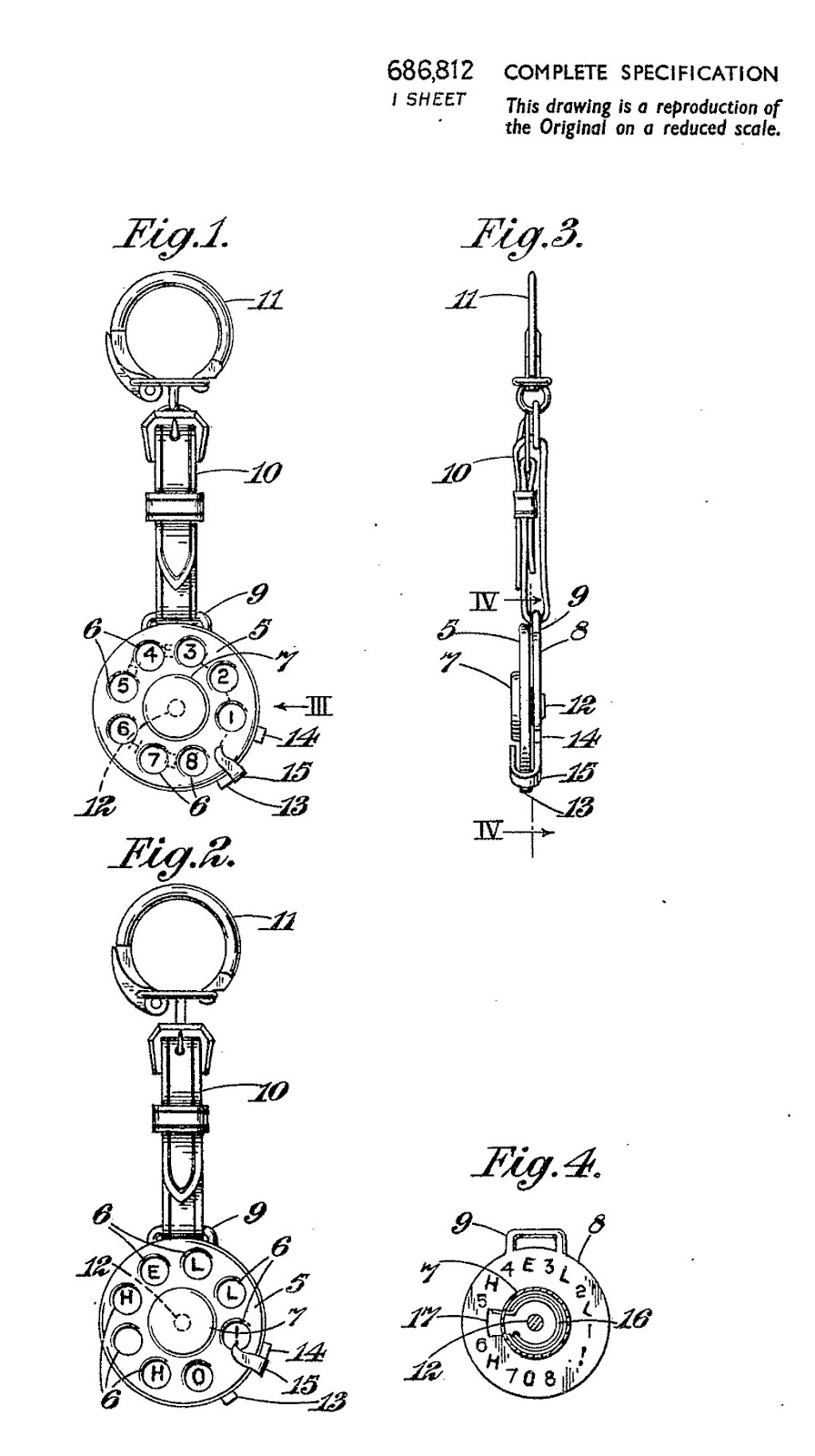 ﻿This invention concerns ornamental devices and more particularly relates to fobs or the like for attachment to a key ring although the device may be applied to powder compacts, lipstick holders, cigarette cases, cigarette lighters, and other similar articles. 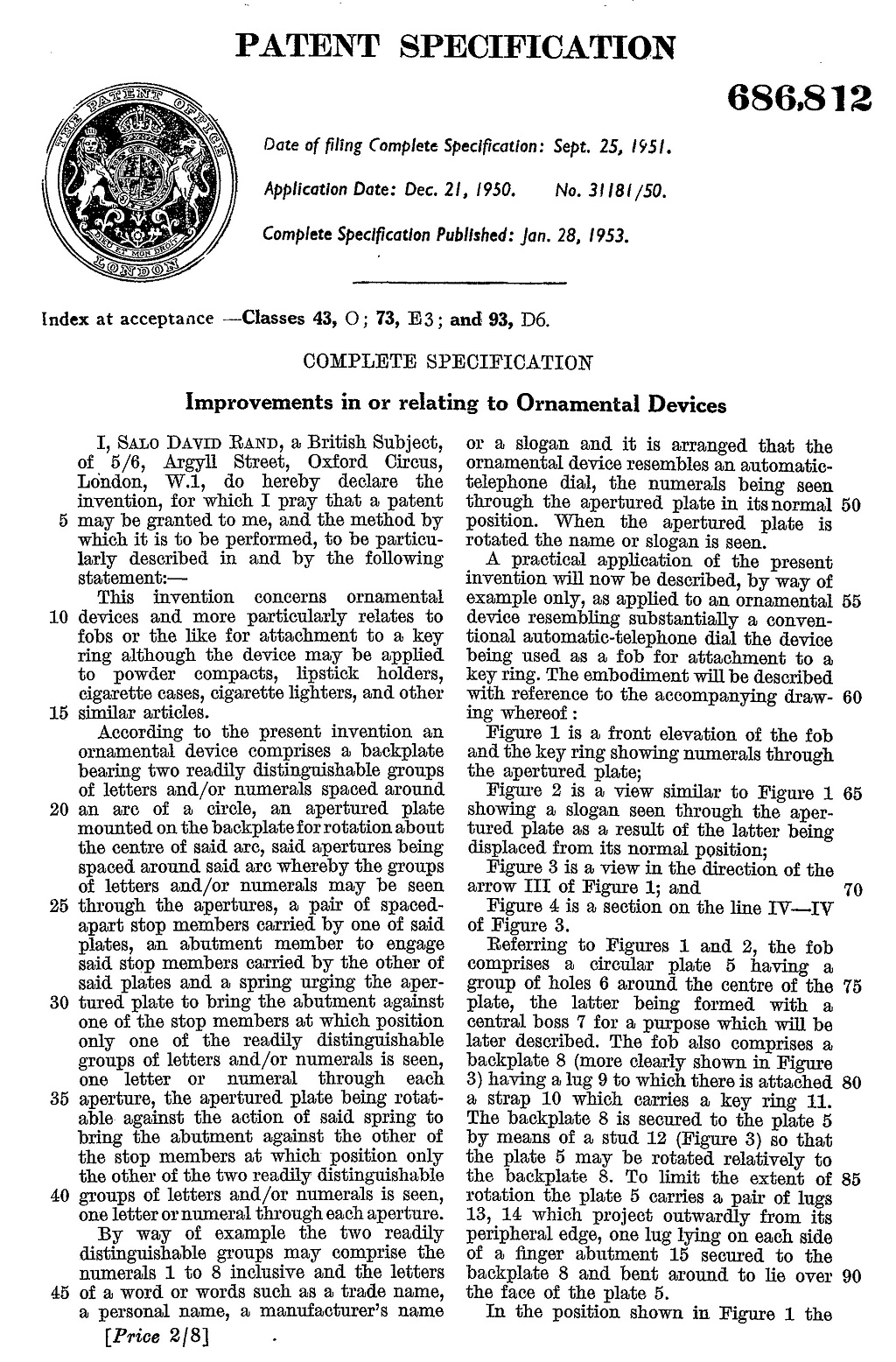 In 1958 Rand collaborated with another inventor named Benjamin Arthur Freeman. They successfully applied to patent a vacuum cleaner which was small enough to be held in one hand.

We will try to find information about these remarkable businessmen and their families. If we do find more details we will be delighted to add it to this blog. If you are related to these business owners or their employees we would love to include the information you have.

His obituary appeared in the August 9 1964 edition of The New York Times.

The associates and employees of William Rand, Inc.,

their president, William Rand, in London, England, on Aug. 2.

Our sympathies are with the widow, Mrs. Rosl. Rand,

and Mr. and Mrs. William Rand.