You may be familiar with the address 17 Legge Lane, Birmingham, as seen in the advertisements associated with the brand name Gwenda. Here is the impressive Arts and Crafts building known originally as the Union Works. 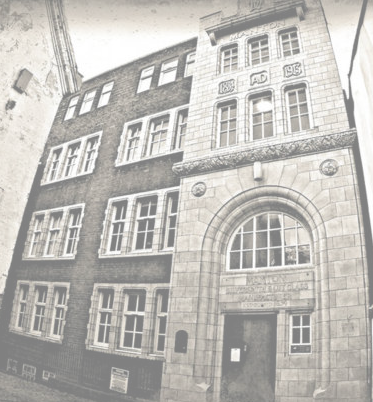 This stylish building was built in 1913 for the well known silversmith Sir Henry John Manton. It was to serve as both an office & a workshop. It is exciting to be able to visualize where the beautiful Manton pieces were made. Over the entrance door these words could be seen ‘Silversmith and Cut Glass Manufacturer Established 1834’.

At the time 17 Legge Lane was constructed it would have been a very fashionable building - a demonstration of how successful the Manton family business was. Faced in tin-glazed earthenware this building was so much more than a place of work. Its association with the Manton family remains today but the building was put up for auction on 17th July, 1929.

The next business concern to occupy this grand building was Hussey Dawson & Co., the owners of the Gwenda brand name. The founders of this firm were John Hussey & Francis Dawson. Although collectors of vintage powder compacts associate this firm with vanities, they produced a wide variety of products. These included money boxes, dolls house furniture, soothers for babies and toys. Holdfast was the brand name for the children’s play items manufactured by this firm. The colourful loose powder compact below shows just how appealing the Gwenda brand vanities can be and why the company enjoyed so much success. The partnership was remarkably inventive and responsible for many varied patent applications.

One patent application from John Hussey of Holdfast Works was for improvements to toy ticket punches.

The application was made on September 7 1939. The details below have not been edited. 520,746. Ticket punches. HUSSEY, J. K. Oct. 31, 1938, No. 31388. [Class 106 (iii)] A toy ticket punch in which the punch moves across a ticket receiving space and is operated by a lever which also actuates a bell and if desired, an indicator showing the number of tickets punched, comprises a punch-actuating lever directly connected to a sliding punch for the operation thereof, in combination with a bellstriking device comprising a striker member mounted upon a pivoted arm carrying a pivoted trip pawl normally held against a stop by a spring and having a nose part which is directly engaged by the punch-actuating lever during the punchoperating movement thereof so as to move back the arm and striker member until the said lever clears the nose and trips the pivoted arm, which is then moved forward by its spring to cause the bell-striker member to strike the bell, whereas during its return movement the lever moves the pawl idly away from its stop and wipes past the same. Each depression of lever 16 moves indicator disc 20 one step through the action of projection 24 on notches 22, the disc being held against reversal by detent 23 while moving axially against spring 25 on the return of lever 16. Lever 161 also depresses spring influenced lever 27 which operates the punch 9 and which carries a lug 32 which bears on the nose 46 of spring influenced trip pawl 43 pivoted on lever 33 to push it against its stop 45 and hence to rock lever 33 about its pivot 34. When the lug 32 clears the nose 46, lever 33 is returned by spring 40 until arrested suddenly by stop 42 causing the striker 35 to be thrown forward to ring the bell 38. The striker is returned to normal position by its light spring 39. On releasing the lever 16, the lug 32 engages the underside of pawl 43 and turns it idly until it has wiped past the nose 46.

A company named A. S. Cartwright Ltd. was also registered at Holdfast Works, Western Road. A patent application for the improvements to children's money boxes was lodged by John Hussey and A.S. Cartwright. The money boxes would display a character each time a coin was put in the box. This application was made March 8 1940.

By 1945 the Union Works, Legge Lane, was known as the Gwenda Works. The trade advertisement above reads as follows.....

'This Ladies Cigarette Case is distinguished by its elegance and strength. Holds 10 cigarettes. A twist and its open. In Goldoid or chromium. You only have to show to sell.'

'LADIES GOLDOID CIGARETTE CASES. In a variety of attractive designs each holding 10 cigarettes. Fitted with spring retaining clip. Can be fitted with mirror at extra charge if ordered.'

'GILT HAND MIRRORS A wide variety of attractive designs in an extensive range of finishes. Each mirror contained in a flat pochette.' ('flat' maybe a typo it could be felt)

'GOLDOID FLAPS in many shapes and designs. Each supplied in a felt pochette and fitted with an inner lid.' Gwenda brand powder bowls and powder jars are highly collectible. They feature lids adorned with beautiful foil decorations. They are so well made that even after many decades they still look superb. We have found them made from both milk glass and flint glass.

The company also made Gwenda souvenir & commemorative vanities. Here is one celebrating the 1939 World Fair. Note the scalloped thumb catch which is typical for Gwenda vanities. 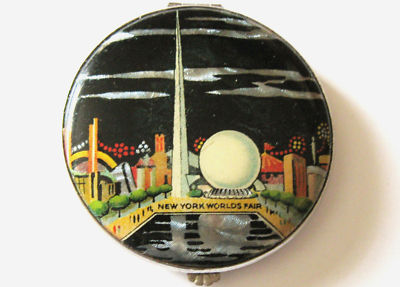 The patent application made on April 28 1945 shown below has not been edited.

Improvements in boxes for snuff and other powders

591,426. Powder boxes. HUSSEY, J. K., and DAWSON, F. W. April 28, 1945, No. 10774. [Class 18] A box for snuff or other powder and of the kind comprising a flanged lid and a flanged body having apertures which can be brought into register has a circumferential groove 4 extending around the body 2 and a depression or depressions 9 upon the lid 6. The depressions may be formed by pressing inwardly the ends 8 of the slot 7 in the lid portion, and other depressions 9 may be spaced circumferentially from the slot 7. Knurled beadings 10, 11 may be provided upon the body and lid to facilitate relative rotation. This is a mid-century Gwenda brand royal themed loose powder compact. On the lid a gorgeous image of  QUEEN ELIZABETH II as she appeared in the 1950s. Royal themed vintage compacts are highly collectible. This evocative 1950s vanity was made to celebrate the coronation of Princess Elizabeth in  1953.

In the late 1950s the firm was selling fewer vanities & in 1961 it went into liquidation. The liquidators sold off parts of the company. All was not lost though. These remarkably resourceful people formed a new company, known as Hussey Gwenda Products Ltd. It does not appear as though vanities were being made by the new company. A firm known as Pressed Metal Products Ltd. was also listed at the Gwenda Works until February 2001. After this date the works address was Unit 5, Heath Street Industrial Estate, Smethwick, West Midlands.

The Gwenda Works potential for elegant residential premises was seen by developers & in 2001 the building was converted into eleven flats by Strawberry Developments. Fortunately the beautiful Arts & Crafts building known as the Gwenda Works became a Grade II listed building on 8th July 1982 and so the conversion was carried out in a manner that would allow this imposing building to retain its character.