Charles Bertrand Murat was born 1 April 1818 in Toulouse. His father, Louis Murat, was a quartermaster of the Compagnie de la Haute-Garonne. His mother died when he was young and he was raised by his father and step-mother. When Charles was sixteen years of age he went to work for jewellers in Paris. He was employed by La Maison Christofle and Savard.

1850 was an important year for Charles Murat, as he married Julienne Geneviève Eudoxie Lhermitte, in January. Julienne was reasonably well off having been left property and an inheritance from her father.

In the same year they moved to rue des Archives in Paris. The premises served as both a dwelling and a jewellery manufacturing concern, as Murat had founded his own firm, Bijoux Murat c.1850. In November 1850 Julienne gave birth to their first child Auguste Ernest. August died at a young age. A year later Jacques Louis Georges was born. Their third child, Paul Marie, was born in 1853. Marie Catherine was born in 1855. Their fifth child, Armand Jules was born in 1857. Julienne died in April 1857.  Her mother, Louise, and Murat's sister came to live with him and to care for him and the children.

﻿Charles Murat was an avowed republican. He opposed the rule of Napoleon III and gave some of his time to help with the publishing of a newspaper aimed at the working population. He played an active part in the 1848 revolution and the Seige of Paris. He was a captain in the National Guard. 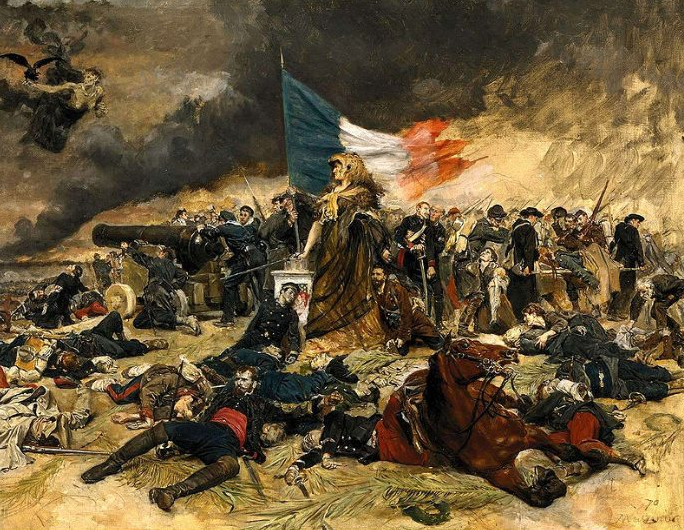 THE SIEGE OF PARIS 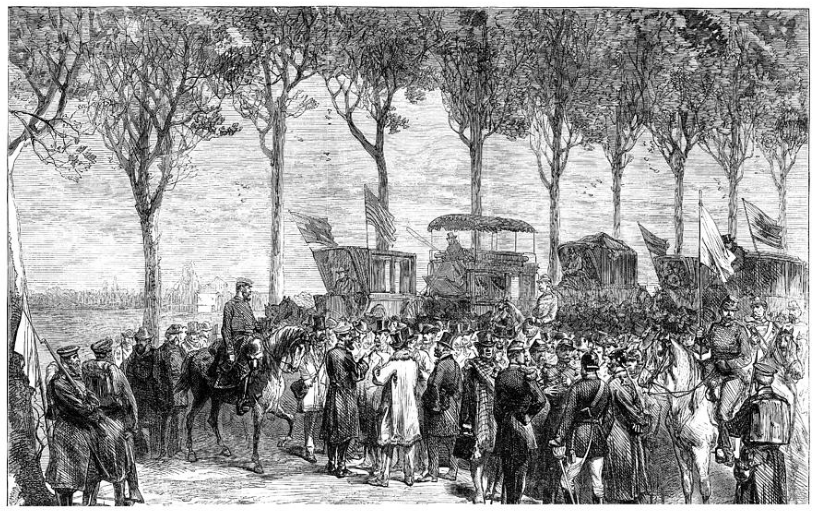 DEPARTURE OF AMERICAN & ENGLISH CITIZENS DURING THE SEIGE

The duration of the Siege of Paris was 19 September 1870 to 28 January 1871. The city was captured by Prussian forces.

During this time Murat organised supplies for some of the population.

On March 26th 1871 Charles Murat was elected Deputy of the Paris Commune in elections. He and all the other moderates resigned in protest.

In 1867 he was awarded the Chevalier of the Legion d'Honneur.

The order's motto is Honneur et Patrie (Honour and Fatherland).

The high quality and artistry of this maker is well known to most collectors of silver and so it is not surprising that Murat exhibited and won prizes at the 1855 (medaille d'or), 1867,1878 Paris exhibitions, the 1862 London exhibition and the Centennial International Exhibition of 1876, which was held in Philadelphia, United States. 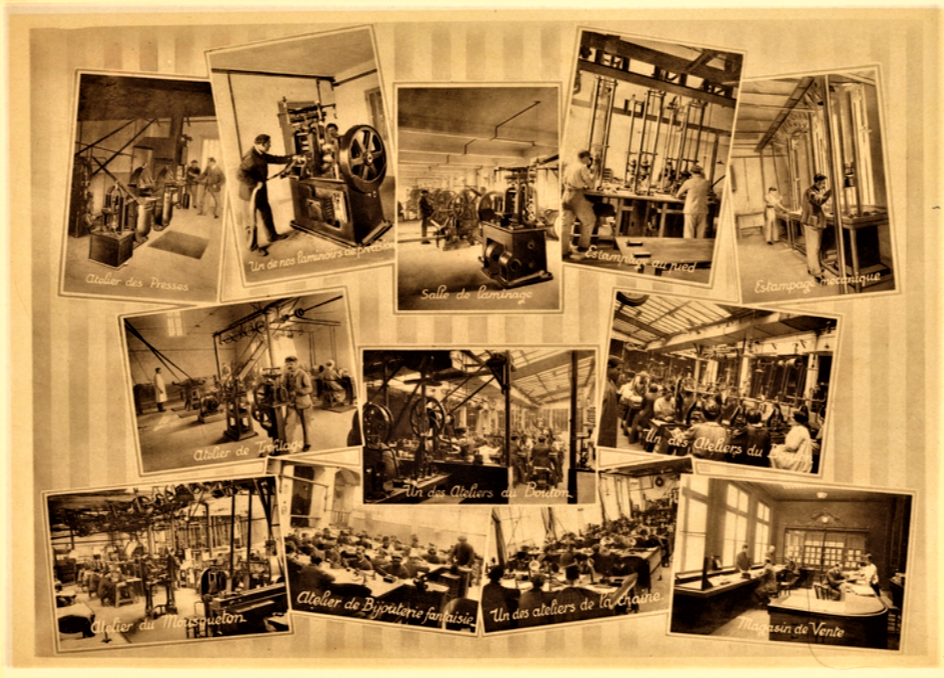 On the death of Charles Murat around 500 employees worked in his factories. Murat was one of the largest employers in the French jewellery trade.

La Maison Murat became especially well known for a technique known as doublé or, which was their patented process whereby high content gold was applied to metals. This patent was published in c.1847.

As solid gold is always expensive Murat's rolled gold items appealed to a much wider clientele which enabled him to capture the mid-price range customers to a much greater extent than his competitors.

The images above show some of the workers and factory premises. The factory interiors depicted are their ateliers in Paris, Alsace-Lorraine and the Ardennes. 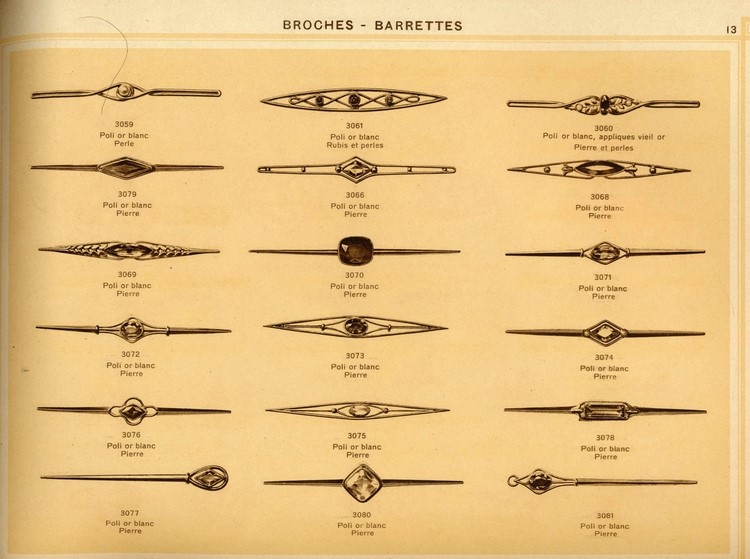 A FINE ARRAY OF MURAT BARRETTES

The brooches shown above were crafted from ﻿Poli or blanc ﻿- polished white gold.

This maker is well known for the exquisite hallmarked silver cigarette and vesta cases. In the tradition of great French silversmiths, medallic art was also practised. Jewellery, fruit knives, cufflinks, brooches, propelling pencils and pencil holders were crafted to high standards and catered to all tastes. 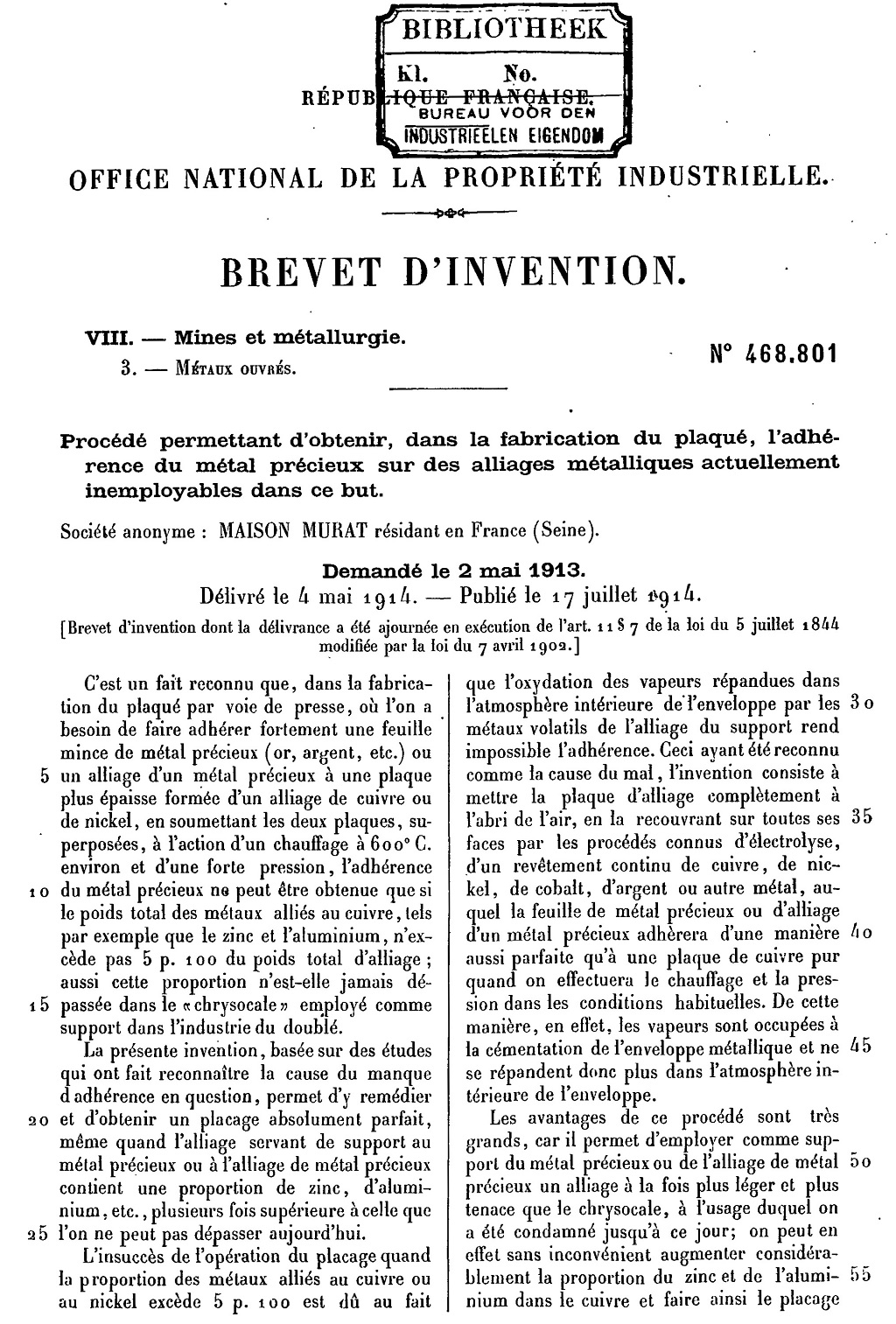 This translates roughly as:-

SUMMARY The subject of the invention is 1 A process for the electrolytic polishing of gold alloys, characterized in that a bath based on phosphoric acid containing chlorine ions is used. 2 A method according to 1, characterized in that the bath further contains organic substances, with an alcohol function, in particular alcohols or acid-alcohols. 3 A method according to 1 and 20, characterized by the following modalities, taken individually or in any combination a. The chlorine ions are introduced in the form of hydrochloric acid, ferric chloride, or aluminum chloride; b. The alcohol functional substance is propyl alcohol, or lactic acid; vs. The voltage is 5 to 10 volts; d. Electrolysis is carried out at room temperature.

Well into the 20th century Maison Murat took steps to protect this patented process. Their latest patent relating to doublé or was published on January 4 1960.

Charles passed on his business to his eldest son, Georges (Jacques Louis Georges), under whose charge the business continued to grow.

Charles died on 9 August 1897 from heart disease. He was buried in the family tomb in the cemetery of Père-Lachaise 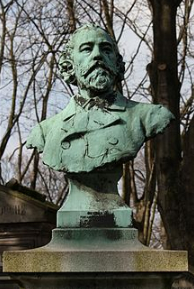 CHARLES MURAT BUST ATOP THE TOMB

In 1900 Maison Murat was still situated at 62 rue des Archives. The high reputation of the company ensured a great following which endures to this day. The firm continued to win awards. Georges and his wife, Julia Rosselot, were childless and so on his death in 1918 Julia allowed her nephews to take over Maison Murat.

Some people translate une mûre as a blackberry and others as a mulberry.

Below are pictured some examples of Maison Murat excellence.

Patents and catalogue images for the firm follow these hallmarked silver collectibles.

This Art Nouveau piece is embellished with holly wrapped in a gorgeous swirling ribbon. This set was originally retailed by the notable jeweller / jeweler, horologist & goldsmith J. Hamon from their store situated at 55 rue de Siam in the sea port of Brest and so the subject matter for these smoking accessories is appropriate.

Such a remarkable set, as it has never been used. These superb smoking accessories have been stored in the original presentation case since the late 1800s.

The cigarette & vesta cases are of the highest quality. The lids and bases match perfectly and show a superbly sculpted nude frolicking in the waves. The perfect female form following the arc of the wave. Her lithe athletic physique, prepossessing face, even her fingers and toes superbly executed. Rather than erotic, this is a celebration of female beauty. The wave and sea foam are protecting her modesty to a certain extent. Above her are two seagulls. The finish on both cases is proof of the superiority of the artist - Murat has rendered the sterling silver to remove all reflective properties. No fingerprints will ever spoil the appearance of these cases. The backs are adorned with a magnificent fish breaching the surface, surrounded by sea foam, enveloped by a wave.

Flying above and beyond seagulls. Both cases are fully hallmarked and bear the maker's mark of Charles Murat. After marvelling at the finely executed exterior cases the interior cases surprise and delight and confirm the unused status of these accessories. The rich vermeil interiors showing the repoussage are superb. The cigarette case has the original gold elastic straps.

The original presentation case too is marvellous, the whole of it clad in green brushed velvet, with no loss of velvet.

The green velvet lining the interior base of the presentation case is so gorgeous and looks like the most beautiful moss you have ever seen. The image above shows a nineteenth century French sterling silver set of repoussage cigarette & vesta cases which are both adorned with manticores. The set is of the highest quality and made by the master silversmith Charles Murat. The choice of a mythical hybrid to adorn these cases makes them highly collectible. The description of the manticore varies from the era to the country of the story teller.

Manticores have been described as having the head and body of a lion / lioness, the tongue and tail of a serpent or lizard and the wings of a dragon or bird. In this instance they have the head and body of a lioness, a lizard-like tongue  and tail and the wings of a bird. In some cases manticores have human heads. The fronts of the cases have splendid manticores looking very fierce indeed. Just below the creatures are shield like cartouches and the whole repoussage decoration is superb, ornate and complex. 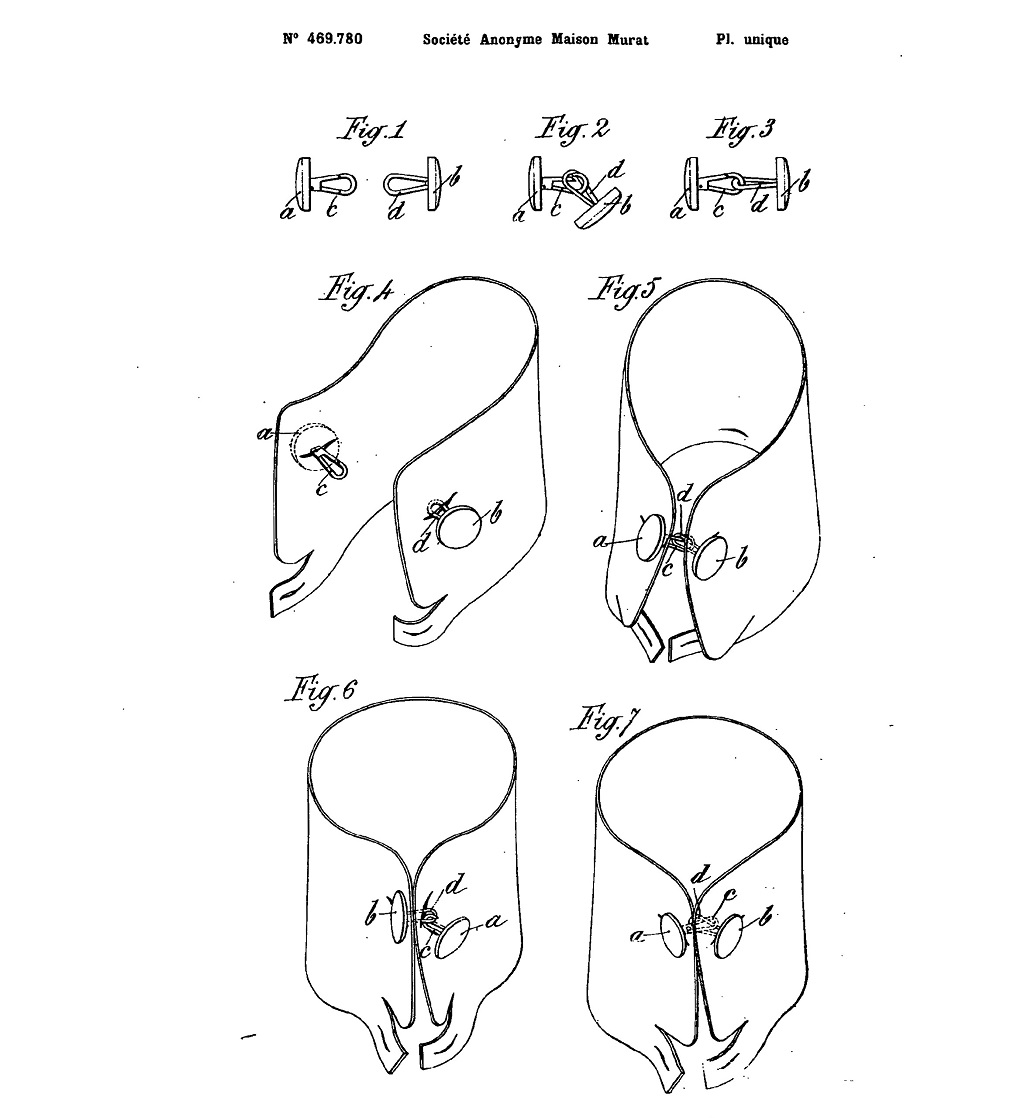 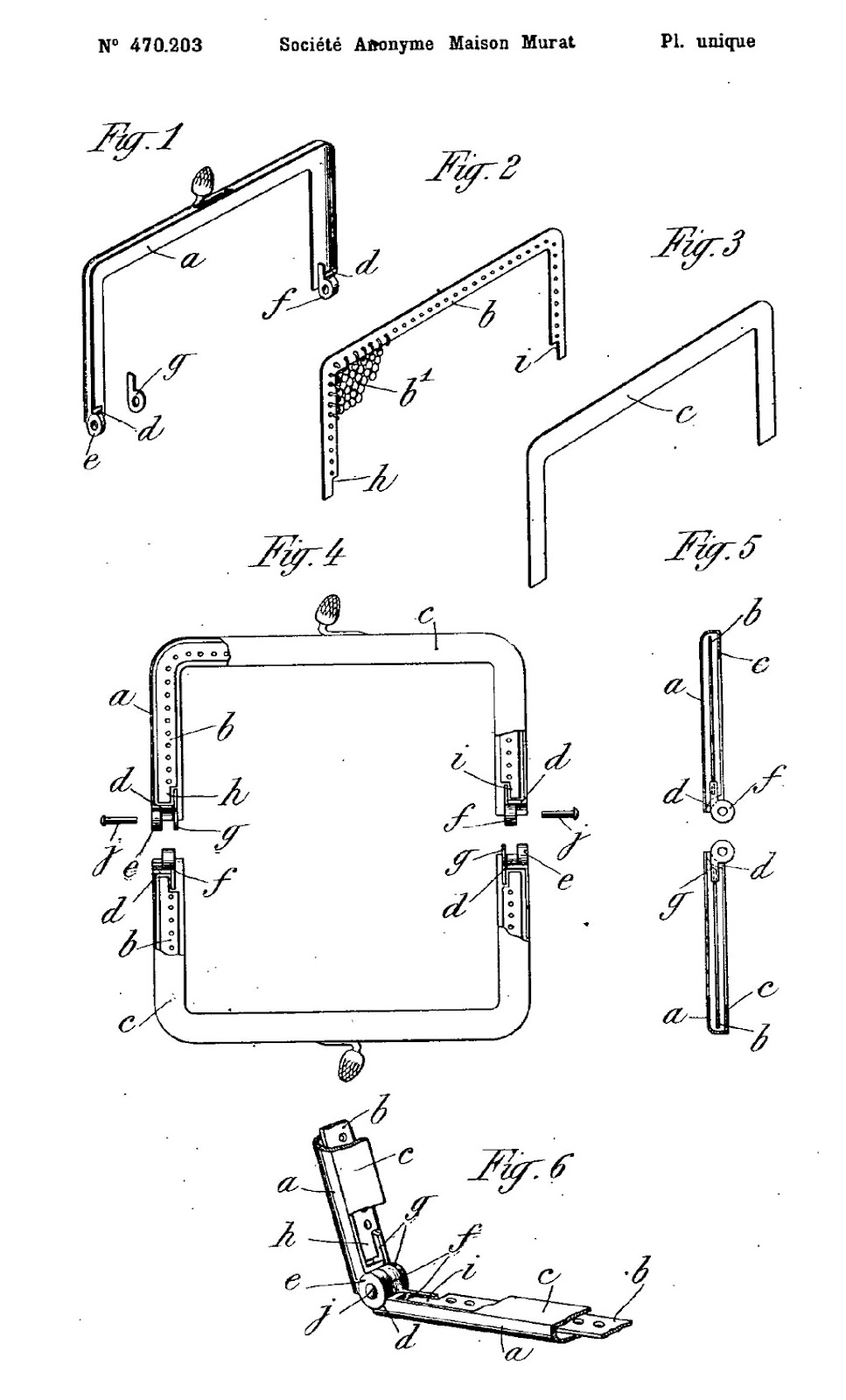 The title of this patent application is:

System for manufacturing purses, billfolds, bags, etc., in gold, silver and all metals, making it possible to make the mesh-holder blank mobile.

Maison Murat designed a mesh holder blank - see the letter c on Figure 4. This piece of metal or precious metal would firmly encase the mesh, ensuring that there were no messy areas. Figures 1,2 and 3 show how this blank would be applied.  La Maison Murat designed superior mesh accessories which were finished to the highest standards. 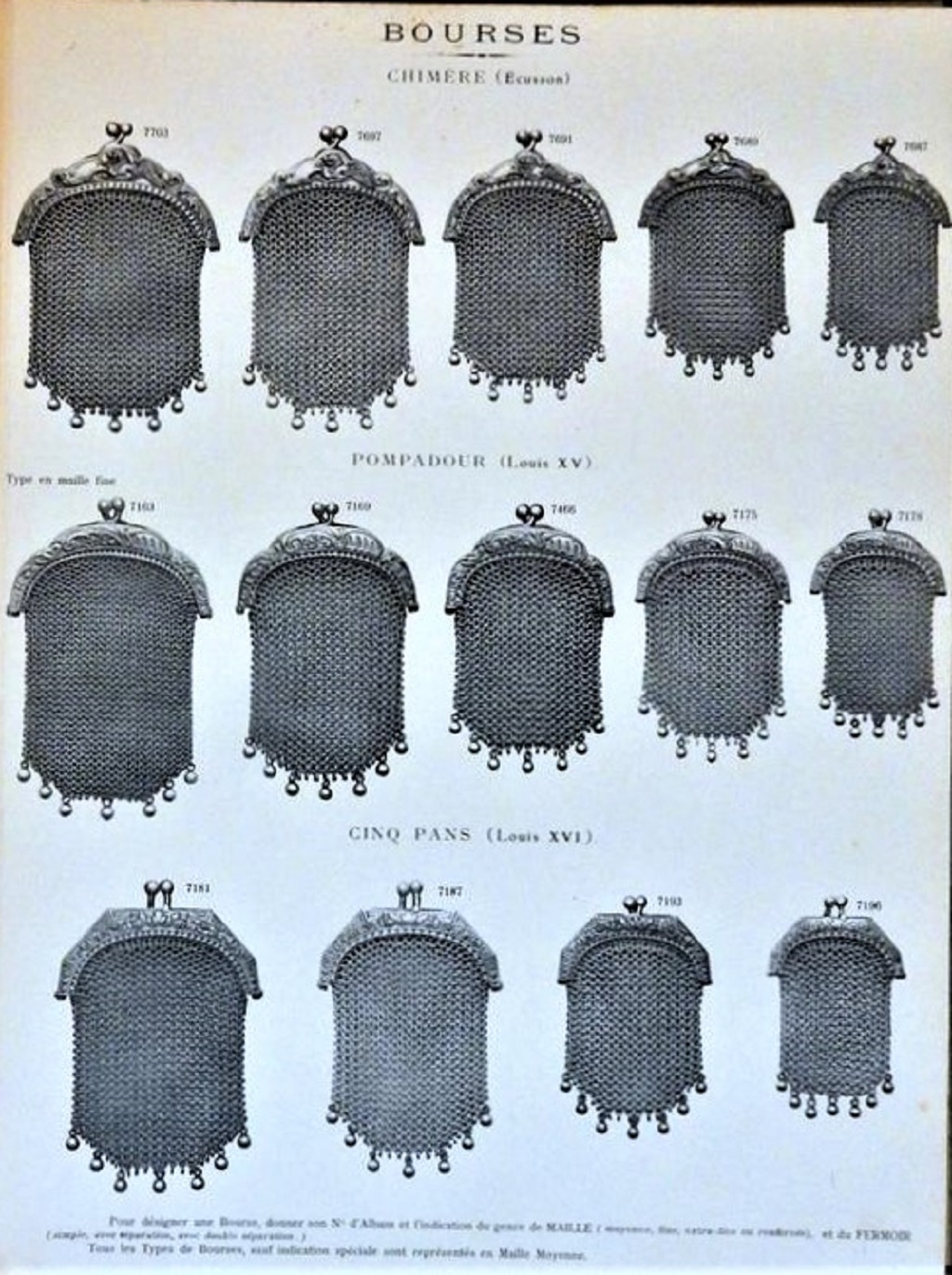 At this time mesh purses were made entirely by hand and so they were extraordinarily expensive. The purses pictured above were crafted from hallmarked silver and so they were a luxury that few people could afford 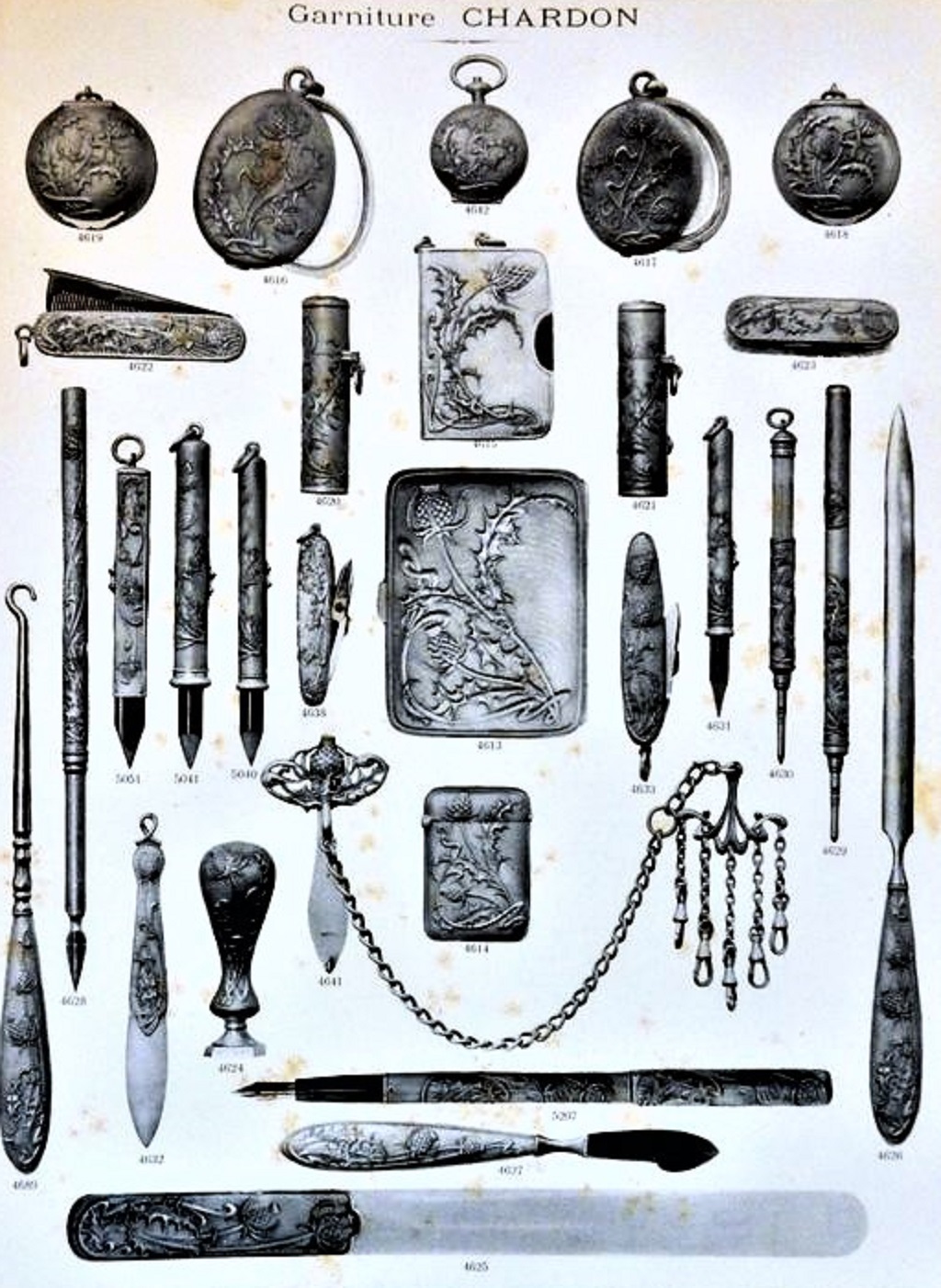 The image above shows just some of the products in Murat & Cie's GARNITURE CHARDON (thistle themed) collection.

Repoussage nudes by this maker are also sought after and rarely found. 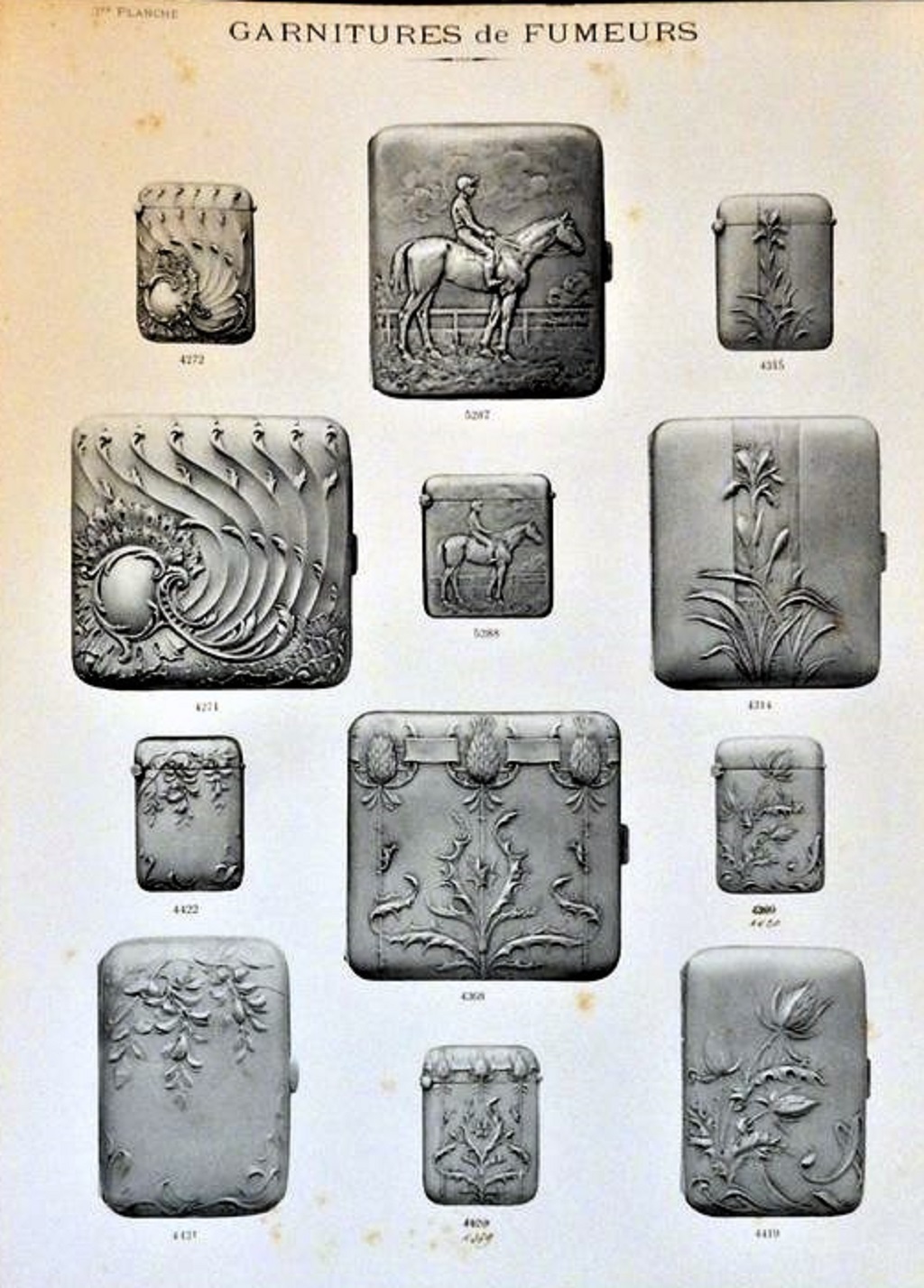 This company crafted matching boxed sets comprising cigarette and vesta cases in hallmarked silver. Each item had glorious vermeil interiors. Unused examples still have vermeil which has not lost its delightful sheen, although they are well over a century old. As you can see from the catalogue page shown above they are enchanting and superbly executed. 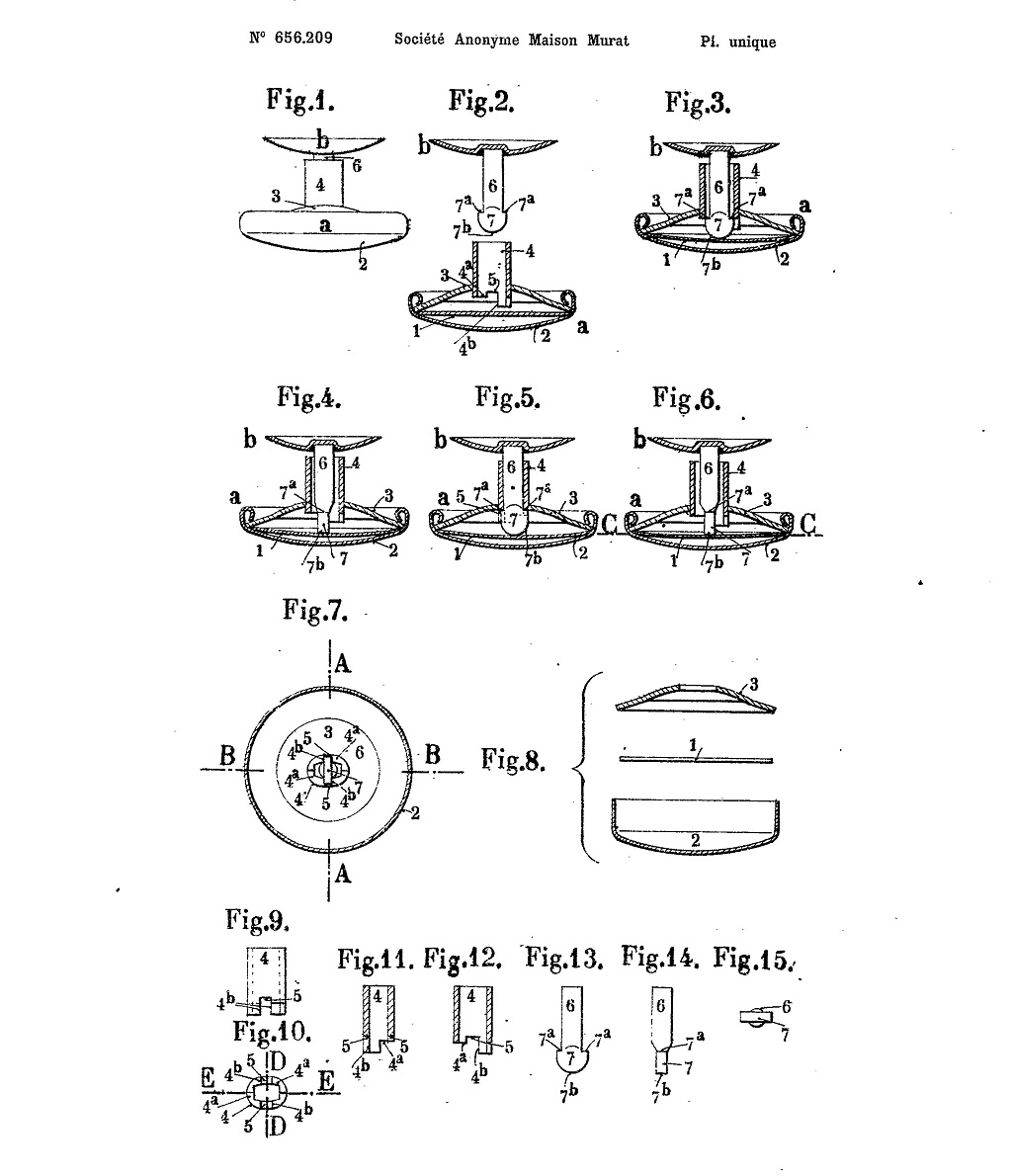 The title of this Maison Murat patent which was published on April 30 1929 is:-

﻿This translates to a removable safety button applicable as a shirt button, ear stud and other uses.

If you look at figure 2 it is easy to see how the invention works. 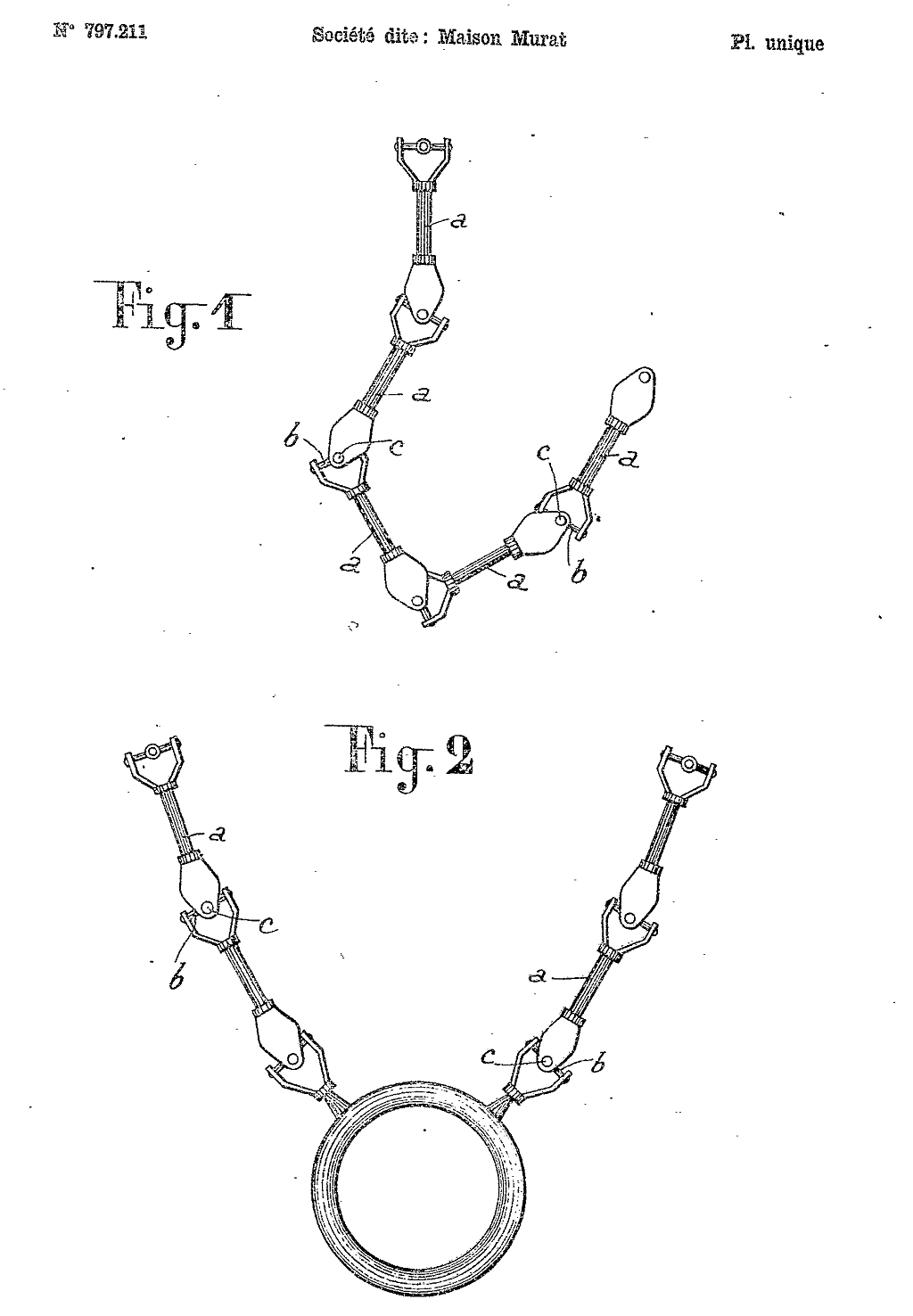 This Maison Murat patent is described as:-

Such a chain can be established in the form of a pocket chain, a gentleman's chain, a fashion chain, etc. and can be used to make necklaces, bracelets, etc.

The chain has the benefit that it can be manufactured without the need for welding.

It is crafted to allow movement whilst maintaining its pleasing appearance and above all its shape. 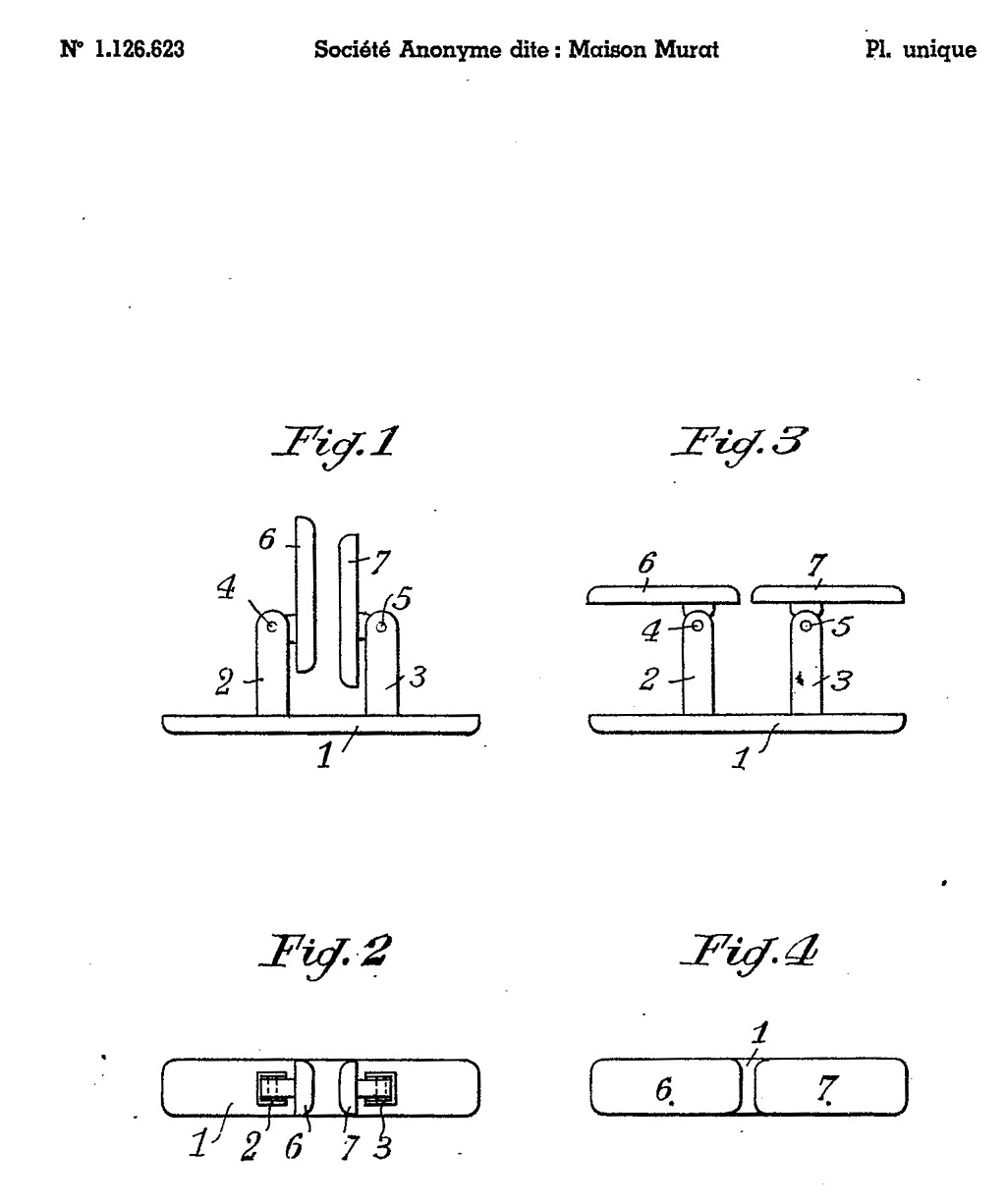 The invention relates to cufflinks in which the button holes are arranged parallel and no longer perpendicular to the forearm.

La Maison Murat remained in business until the middle of the twentieth century.