The image above is of an engraving crafted by William Westley in 1732 titled The East Prospect of Birmingham. ﻿It shows the industrial expansion of Birmingham just before the Industrial Revolution. Many of the buildings were given over for the production of jewellery, trinkets, tableware and metal working. The firm was founded in 1901 by William Benjamin Broadway. The company is still located in the same area of Birmingham today, which is known as the Jewellery Quarter. In the Edwardian era the Jewellery Quarter was as busy as it is today. The location is noted as a centre for the production of jewellery and many other industries, especially metal working. It is a conservation area with over 200 listed buildings. English Heritage described the quarter as - a unique historic environment in England – a national treasure....a place of unique character with jewellery and metalworking which does not seem to exist anywhere else in the world. The trade of jewellery making in this region dates back to the mediaeval era. In the twenty-first century a quarter of the jewellery made in Britain originates from Birmingham ﻿Jewellery Quarter.

As we see from the catalogue shown above, Broadway & Co. Ltd. works were once sited at Spencer Street, Birmingham. The catalogue lists Brushes, Mirrors, Manicure Sets & Photo Frames. This company is particularly well known for their hallmarked silver brush sets and vanities. The company premises are now sited at Shady Lane, B44 9ER. A white sign with W. B. BROADWAY in elegant blue font can be seen on the gable end wall

William Benjamin Broadway was known to be an expert die sinker. This process involves machining a cavity in a block of steel. This cavity (sunken die) would be finished by hand. The maker would scrape, file and grind the surface until the desired shape appeared. Then this would be hand polished. The die block would be used in moulding and die-casting as well as hot and cold forging. As you can imagine a die made from steel would last a very long time. 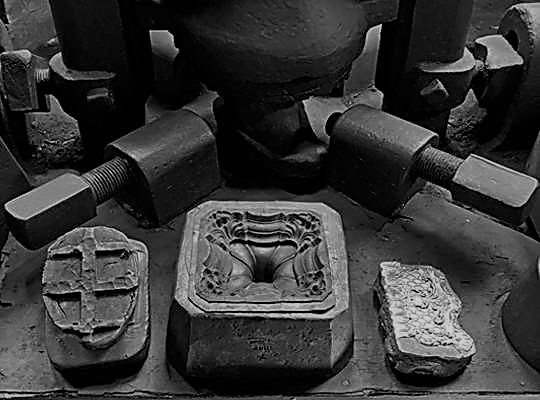 Once the die had been cut it would be fitted into a drop-stamp. A heavy hammer head raised by a rope would strike a sheet of metal or precious metal on being released. The blow from the hammer left the impressed design which had been so carefully crafted on the die. The training to become an expert drop stamper is thought to have taken almost a decade. Since the mediaeval period ten year apprenticeships have been the norm for many of the trades related to jewellery making and manufacturing.

The dies and drop stamp machine shown above belonged to the silversmiths J. W. Evans. The company ceased trading. In 2008 English Heritage took over the site and opened it to the public in 2011.

Unlike many jewellery concerns started at the beginning of the twentieth century Broadway & Co. is still in business today. It is privately owned by the Broadway family. The third and fourth generation of the Broadway family ensure the high standards of the Edwardian era are maintained today.  Gerard, Richmond and Christian Broadway oversee a business which still uses the dies and stamps that were crafted by the founder in the 1900s. 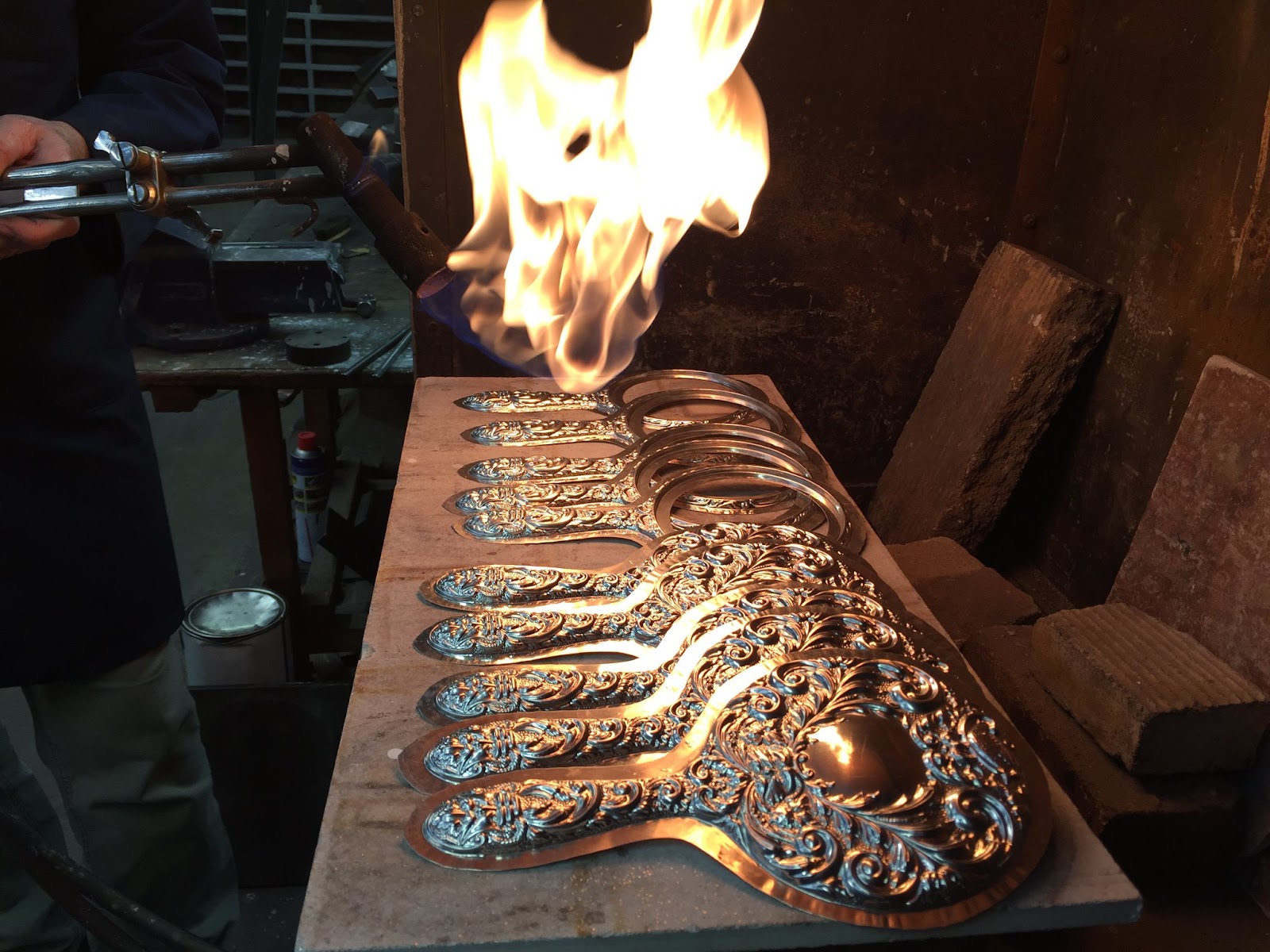 As a result many of their products look just as they did in the Edwardian era. Broadway & Co. ladies dressing table sets are particularly ornate.

As with many traditional British gold and silversmiths, Broadway & Co. fully hallmark their products and so there is no mistaking antique, vintage or contemporary silver crafted by this firm’s experts.

Unlike most countries the British hallmarking system often includes a date year.

The UK Hallmarking Act (1973) covers most modern law regarding the assaying and hallmarking of precious metals in the United Kingdom.

If they meet the minimal purity requirement they can be hallmarked.

Under this act the date mark was no longer compulsory.

However, many British makers continue the tradition of including the date year on their gold and silverware. 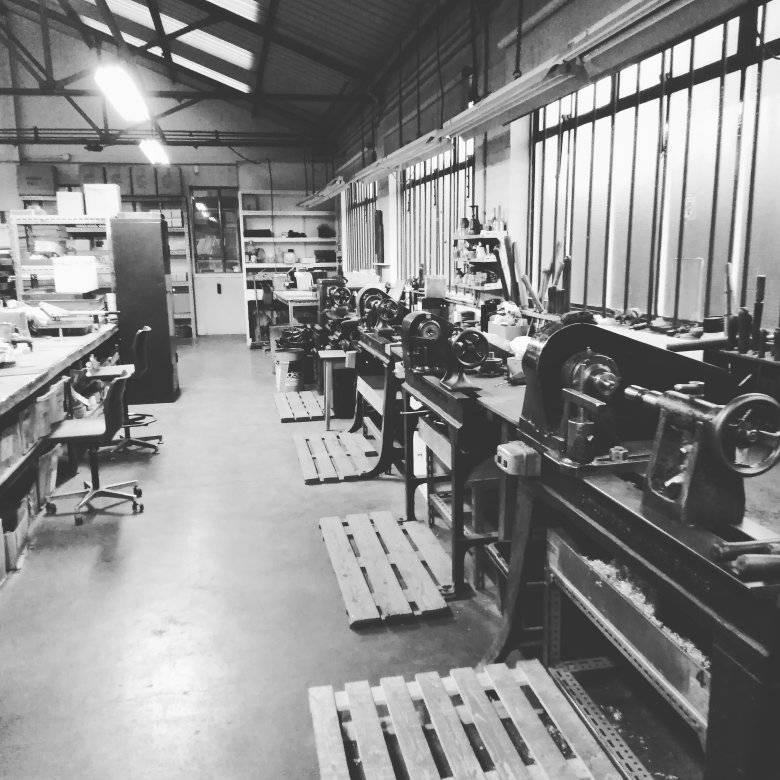 If the machinery shown above looks old fashioned it is because these are antique machines. In the Victorian and Edwardian era machines were manufactured for the production of jewellery and silverware which have never been surpassed. Consequently they are still in use today.

Traditionally machines and work benches were placed near large windows as this intricate work requires good natural light as well as strip lighting for darker days.

Broadway & Co. silverware, vanities and decorative silver is still hand crafted. The team like to call the Birmingham factory Broadway HQ. A small team of expert silversmiths hand craft traditional and contemporary pieces from sterling silver which is fully hallmarked. 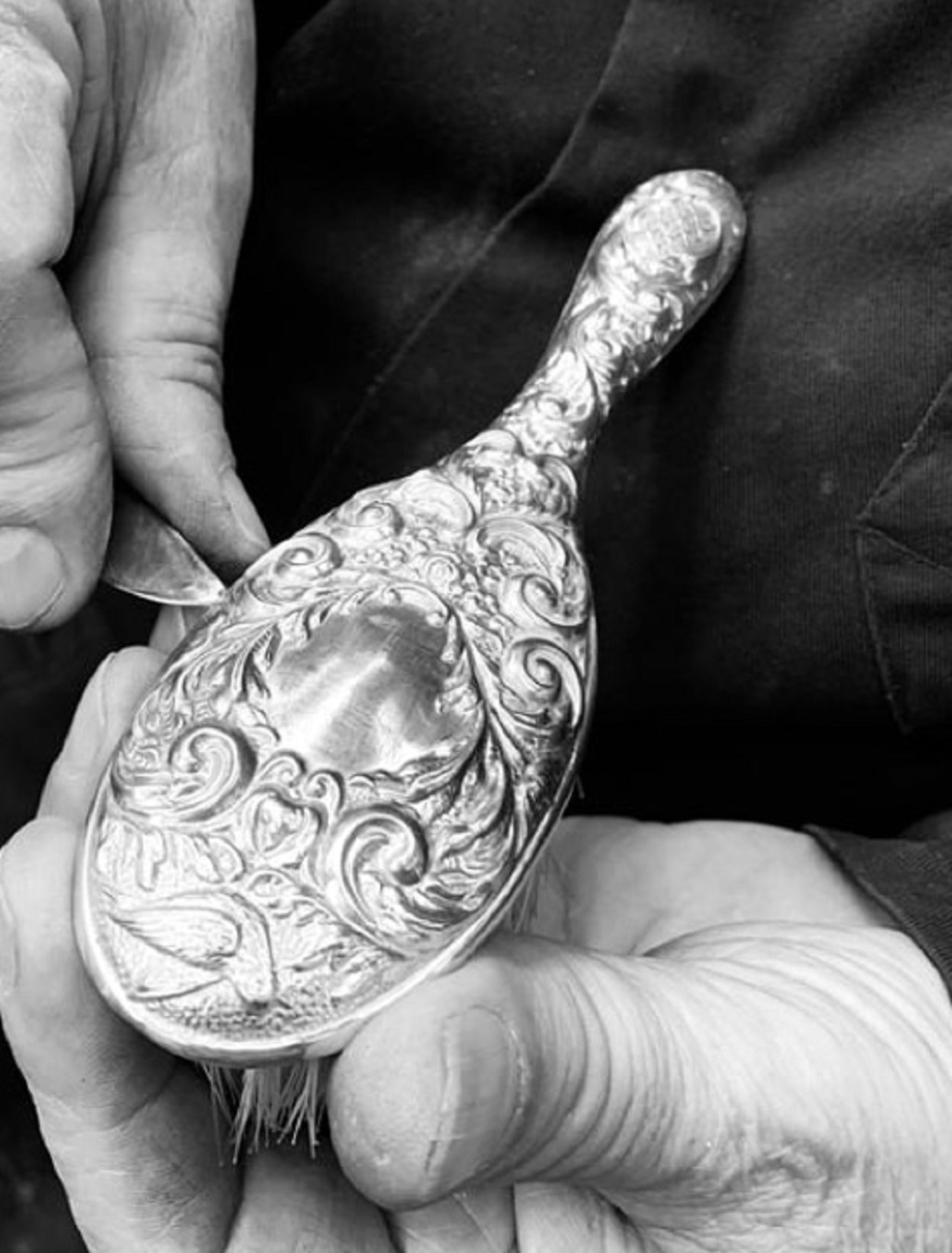 
Is this Art Nouveau crafted at the turn of the century or made in their workshop in the 21st century?

Only the date letter hallmark would answer this question.

The repoussage decoration traditionally surrounds a blank or vacant cartouche which many people like to have engraved with the initials of the recipient, although the presence of initials will make the piece less appealing and restrict the amount of buyers when the owner passes away.

The English word used to describe this process is derived from the French verb repoussé, literally ‘to push back’.

Accessories and vanity items which would be handled often were embellished with repoussage work so that they will never show unsightly fingerprints. 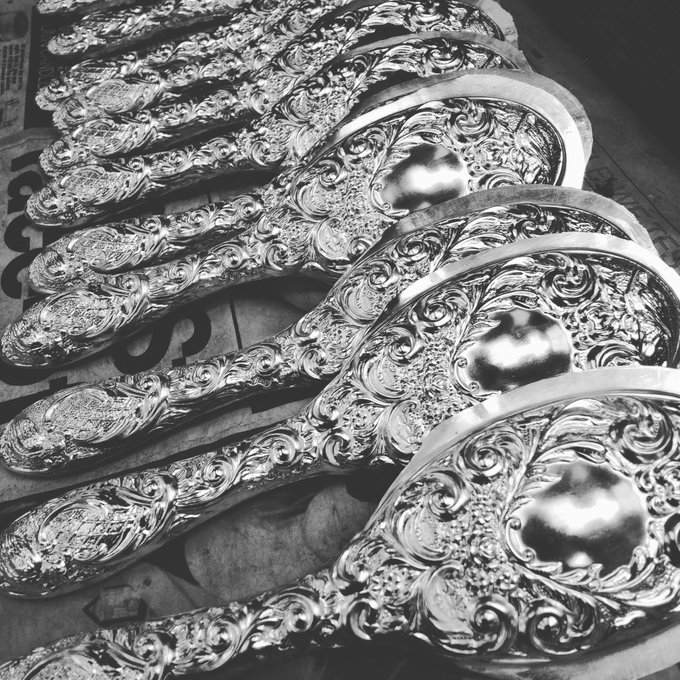 The precious and non-precious metals most suited to have this type of embellishment are a type of brass known as gilding metal, sterling silver, gold and copper. The malleable nature of these metals makes them ideal for repoussage.

Sterling silver has a minimum millesimal fineness of 925 parts per 1000. It is 92.5 % pure silver & 7.5 % copper & other metals. This is the perfect combination for silversmiths, as it is soft enough to create the most superbly fashioned pieces imaginable & yet not too soft to be practical.

Sterling silver also is easy to clean, quite resistant to tarnishing & robust enough for daily use.

Fine silver 99.9 silver is found to be too soft & apt to crack when overworked. Hundreds of years ago it was discovered that the addition of copper in tiny quantities to fine silver created an alloy which retained all the qualities of fine silver but was much stronger. Sterling silver is widely accepted as the grade of ‘solid’ silver most suitable for the creation of fine pieces - malleable enough to fashion into objet d’art & yet robust enough to finish & harden to a sharp edge.

Punches were used to create a surface which will not show marks like fingerprints. The methods & tools used to fashion metals have changed very little over the centuries. Repousse work is slow, labour intensive & highly skilled. Silversmiths engaged in this work should take regular breaks every twenty minutes to rest their bones & stretch their fingers. Non-ferrous metals like gold, silver & copper are worked on cold as they are quite malleable.

Throughout the eras Broadway & Co. produced iconic designs which typified the fashions of the day. 
The splendid Broadway & Co. pierced silver frame shown above is typical for the Edwardian era.

The embossed scrollwork and pierced lattice work design are mounted on a fabric covered frame. 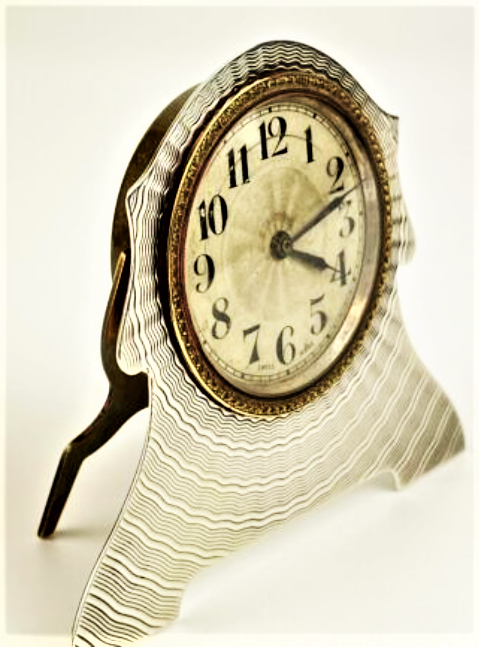 The easel back clock is mounted within a sterling silver surround with Art Deco styling. 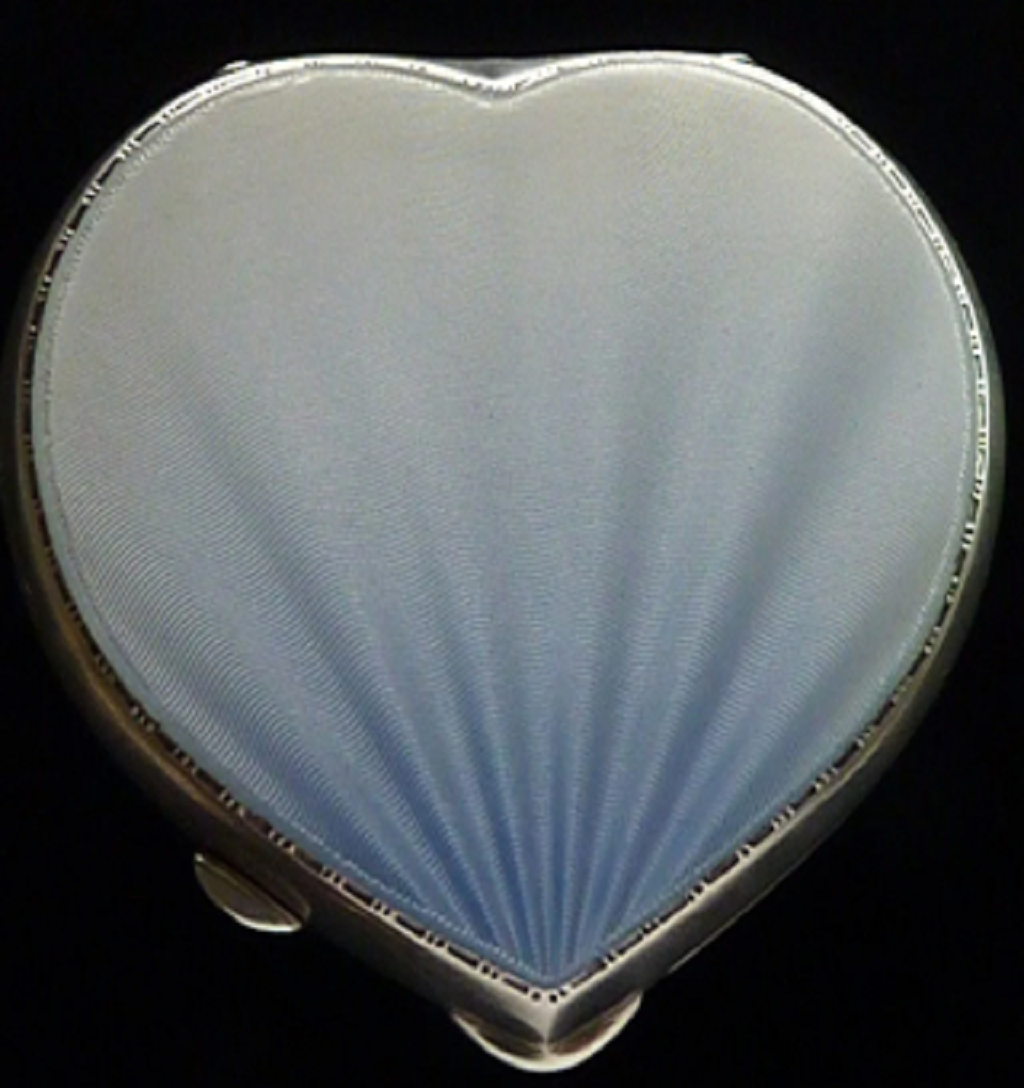 This extremely rare vintage compact mirror is in the shape of a heart! The guilloche enamel is absolutely delightful - baby blue at the pointed end of the heart grading to the lightest blue at the top.The whole item is a joy to behold. We have never seen this style of sterling silver and enamel compact mirror before. We think that this shape of compact mirror was a patented design used only by Broadway & Co. and that the firm would have crafted other compacts with different lid decorations using the same patented design for the main body of the compact. We have contacted the firm to ask who the inventor could be as we can not find any patents as yet. 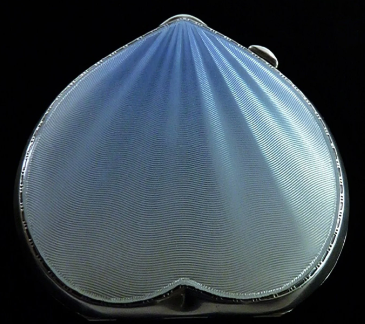 
The engraving is fashioned in the style of clam-shell like waves.

This is one of the classic guilloche engraved designs. 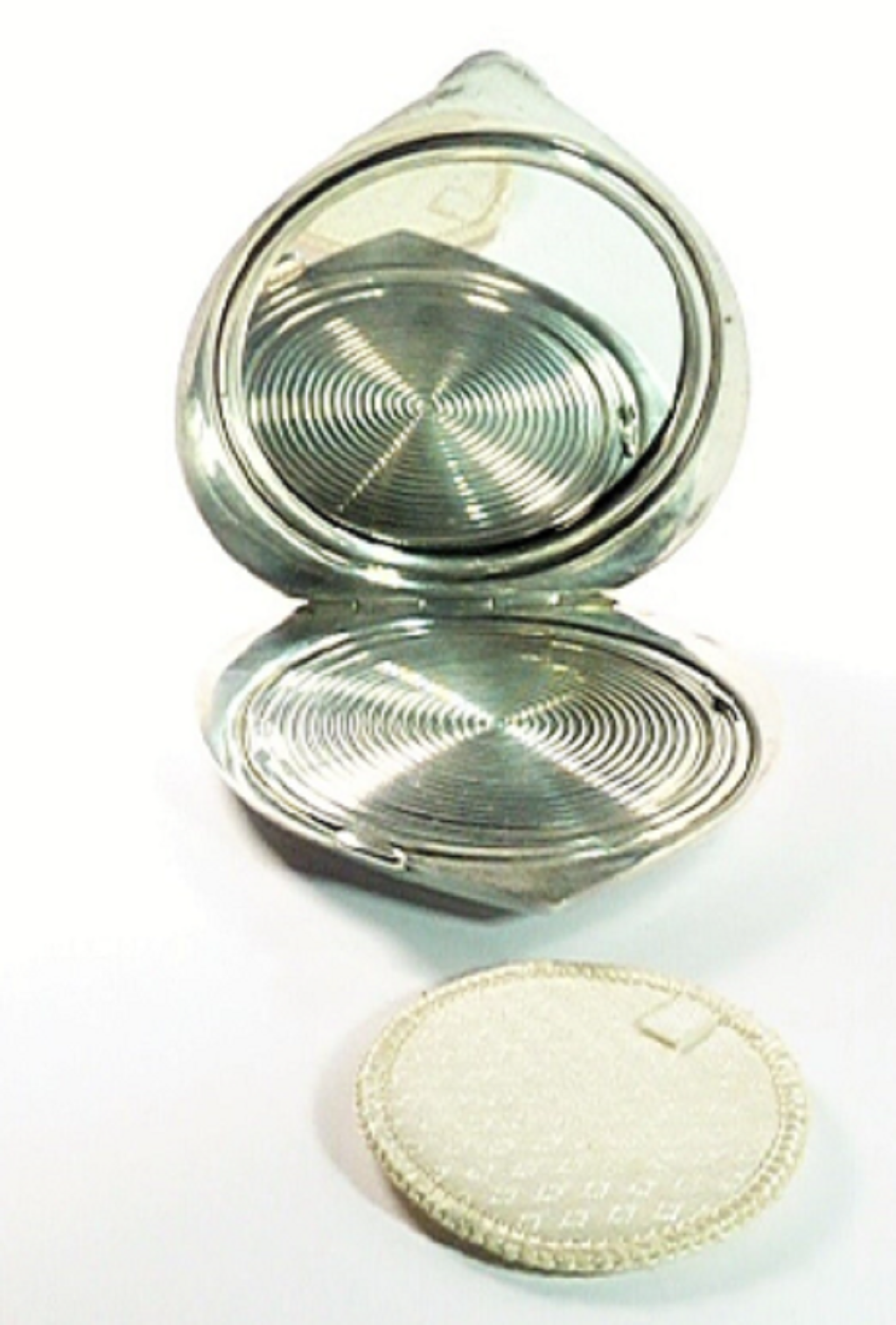 This rare collector's piece has a double thumb catch, sturdy hinge and attractively engraved inner lid which is held in place by a sliding catch. The puff and sifter are shown. Measures 3 inches wide and weighs 111.8 grams.

The compact is hallmarked B & Co into an oval (Broadway & Co), Birmingham Assay Office (anchor), lion passant (sterling silver) and the date year 1950 (A). A rare fully hallmarked sterling silver heart shaped compact mirror by the highly prestigious Broadway & Co. This handbag mirror was assayed at Birmingham in 1950. The lid is embellished with ornate bright-cut and guilloche engravings which shimmer as they catch the light. The base is ornamented with a stylish engine turned design. 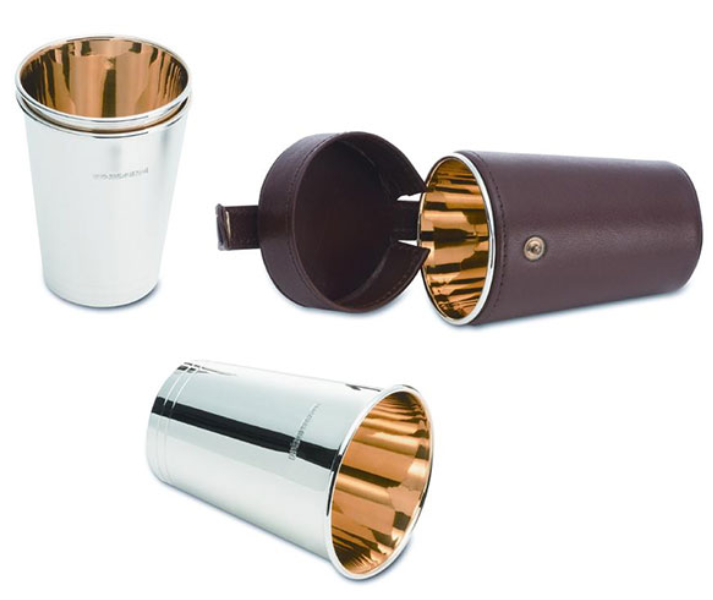 As well as crafting fabulous vanities the firm produces a range of gifts, tableware and frames in contemporary designs, such as the whisky tots shown above. We think that the company is a B2B company.

It produces silverware for the retail trade rather than markets direct to the public.

Richmond Silver is also part of this family of companies.