The fascination and love for all things antique, vintage and retro extends to articles crafted from Bakelite.

The invention of Bakelite made possible the manufacture of some of the most recognisable Terri Inc vanities. ﻿Leo Hendrik Baekeland (November 14, 1863 – February 23, 1944) was a Belgian chemist who visited England and American on a travel scholarship. His mentor, Professor Charles F. Chandler of Columbia University persuaded Baekeland to stay in America and concentrate on his chemistry experiments.

In 1893 Baekeland invented the first commercially viable photographic paper which he named Velox. This invention made him wealthy. He continued to work hard to discover new products.

Baekeland conducted experiments with phenol and formaldehyde. Using pressure and heating he produced a hard plastic with properties that allowed great versatility. He named this malleable material Bakelite. It is sometimes called Baekelite, as he named it after himself. On December 2 1908 he applied to patent the manufacturing process by condensation of phenol and formaldehyde, of a hard and friable product when it is cold and elastic when slightly heated.

In 1922, after patent litigation which found in favour of Baekeland, the General Bakelite Co., which he had founded in 1910, along with the Condensite Co. and the Redmanol Chemical Products Company were merged into the Bakelite Corporation.

The Bakelite Corporation and Terri Inc. are responsible for the production of some of the most iconic Bakelite vanities.

The Terri brand originates from a trademark created by Terri Ryan in 1923. Ryan worked as head of the design department for the American Perfumers' Laboratories Inc. The company was founded in 1924. It was principally a supplier of cosmetics and vanity cases.*

By 1925 the firm was offering a variety of vanity cases. The Chevron, Check, Moire and Oval have the appearance of sleek dance purses. Each case was fitted with a large mirror so that the full face could be viewed whilst applying makeup. The cases have compartments for rouge, foundation and lipstick. A further area was included to keep cigarettes, keys and money contained. 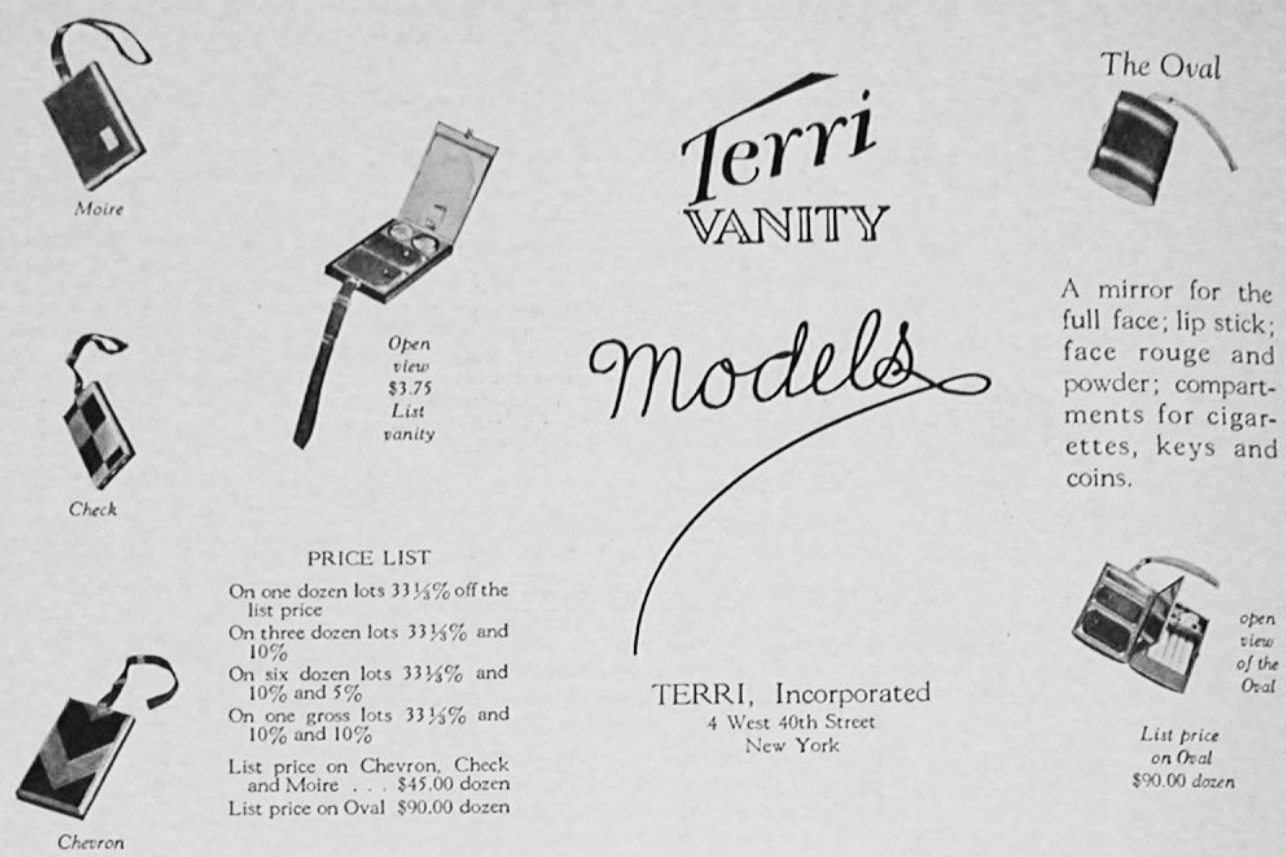 These cases were decorated in typically Art Deco styles and looked similar to the more traditional necessaires which were popular in the 1910s. The trade advertisement shown above details discounts of 33 1/3 %, 10% and 5% off the list price.

Felix B. Miller was the inventor of one such case. He is noted as the ASSIGNOR TO AMERICAN PERFUMERS LABORATORIES INC.,OF NEW YORK. The patent was published on May 7 1929. 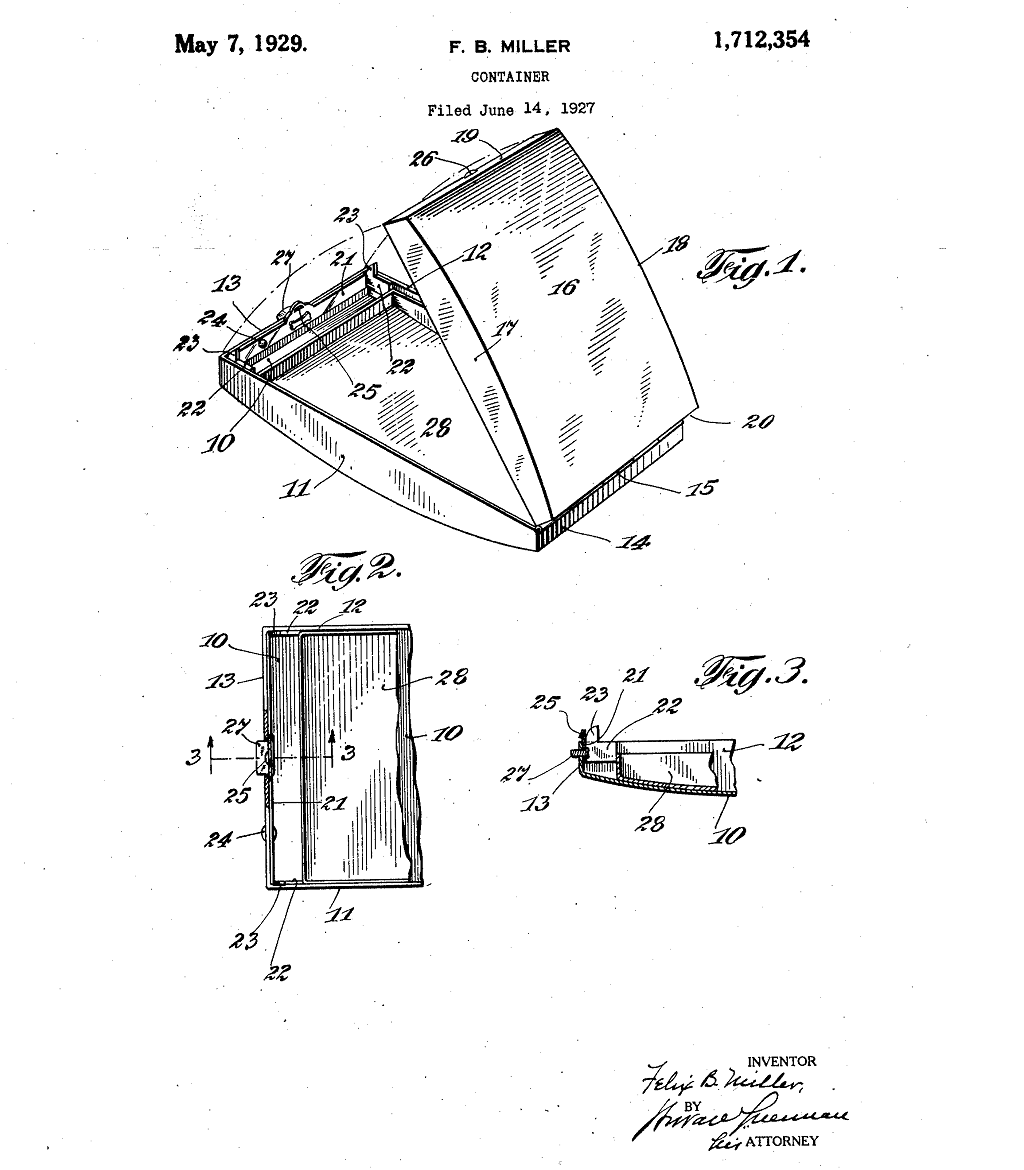 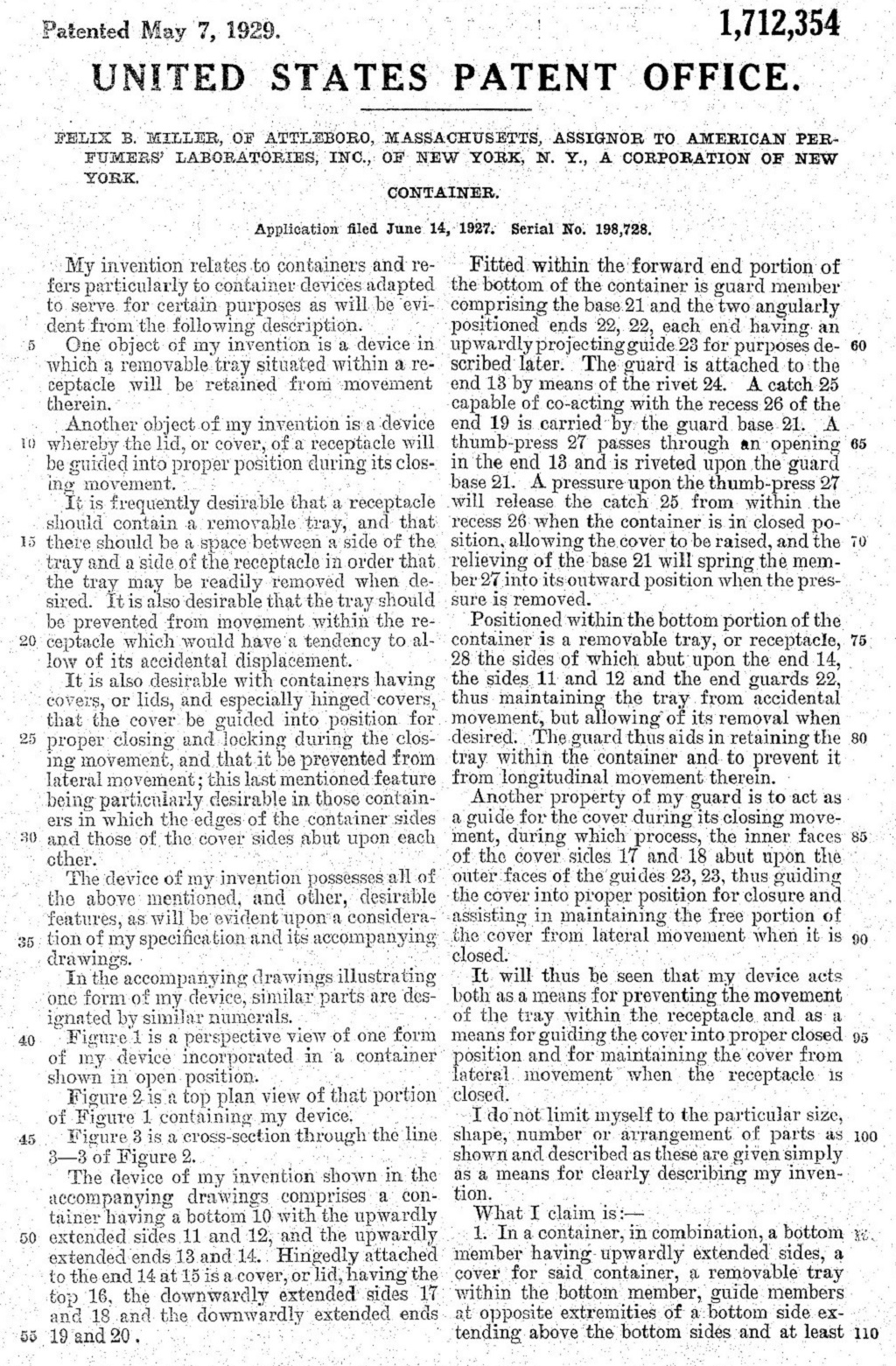 Terri Inc. is believed to have been owned by Ryan Terry. The address advertised in promotional literature was 4th West 40th Street, New York.

On January 3 1928 Wendall M. Hauch's patent for a vanity case was published. It was one of several designs that he applied to patent on behalf of Terri Inc. 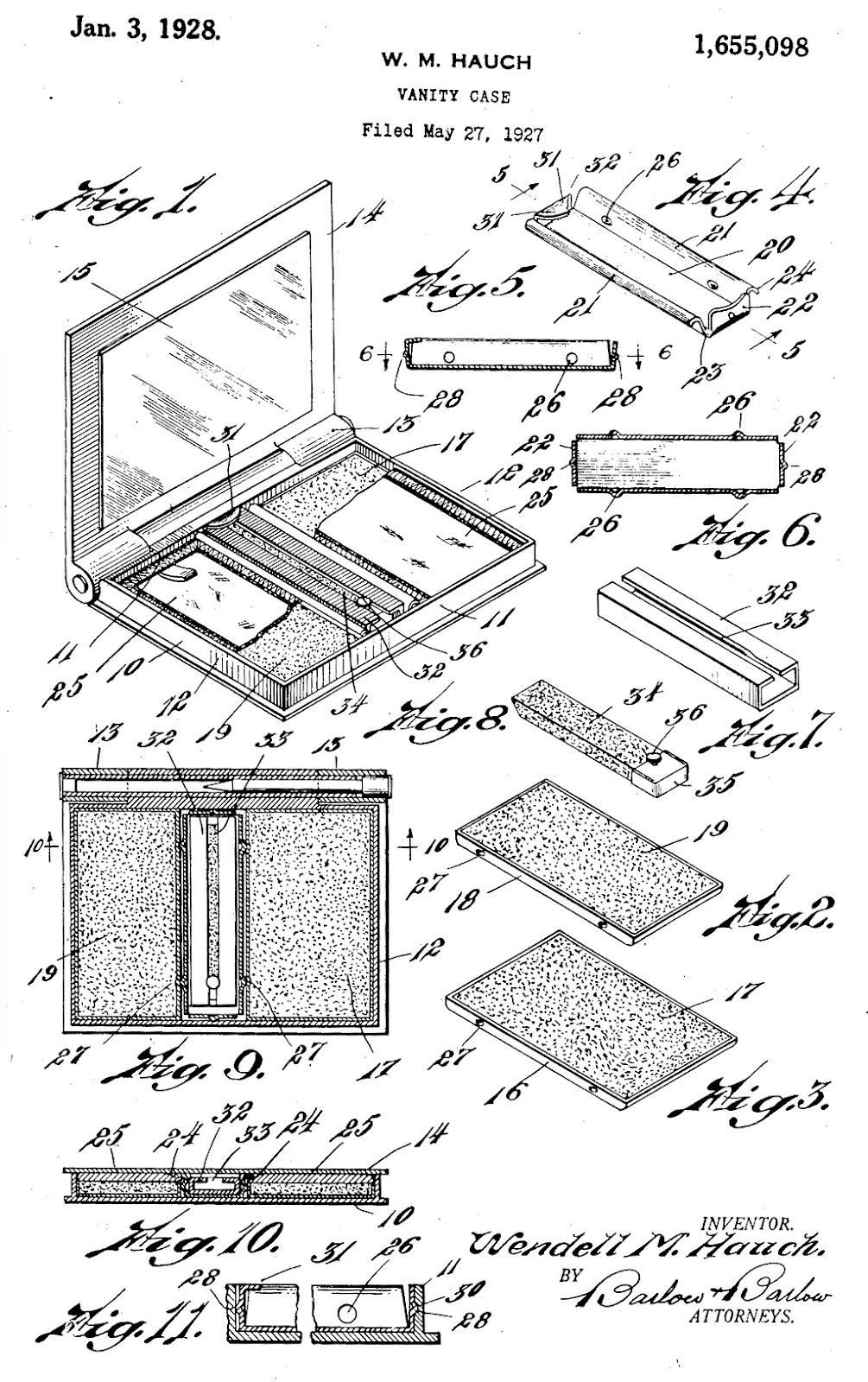 Figure 1 is a perspective view showing the casing with the lid open and the body portion as containing a pair of trays bound in position by resilient walls of the central article carrying member.

Figure 2 is a perspective view of the rouge carrying tray in detail.

Figure 3 is a perspective view of the powder compact carrying tray.

Figure 8 is a perspective view of the lipstick withdrawn from its casing. 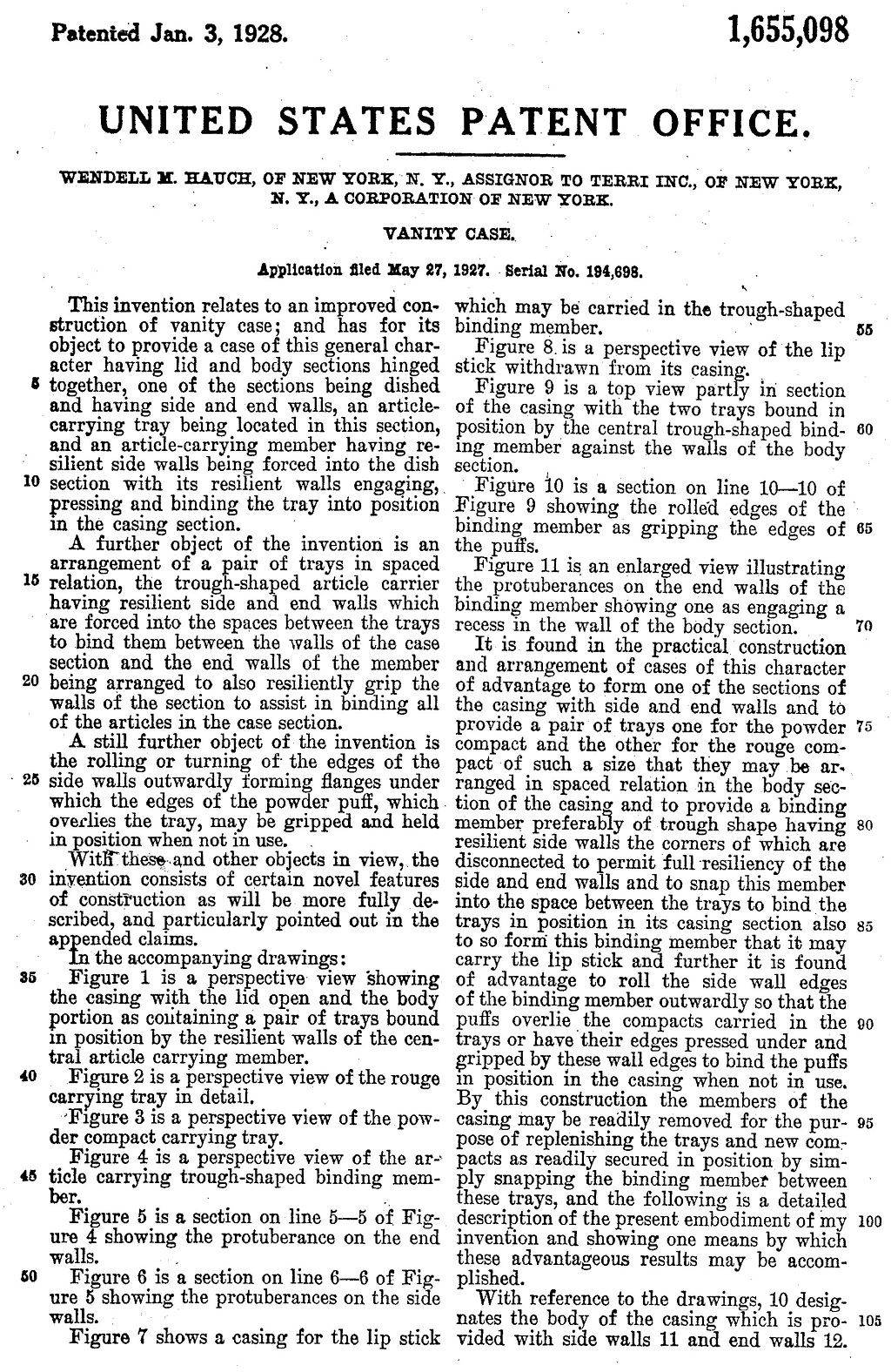 Another Wendall Hauch patent can be seen below. This time it is for a flip top Terri Inc. combination cigarette and vanity case. 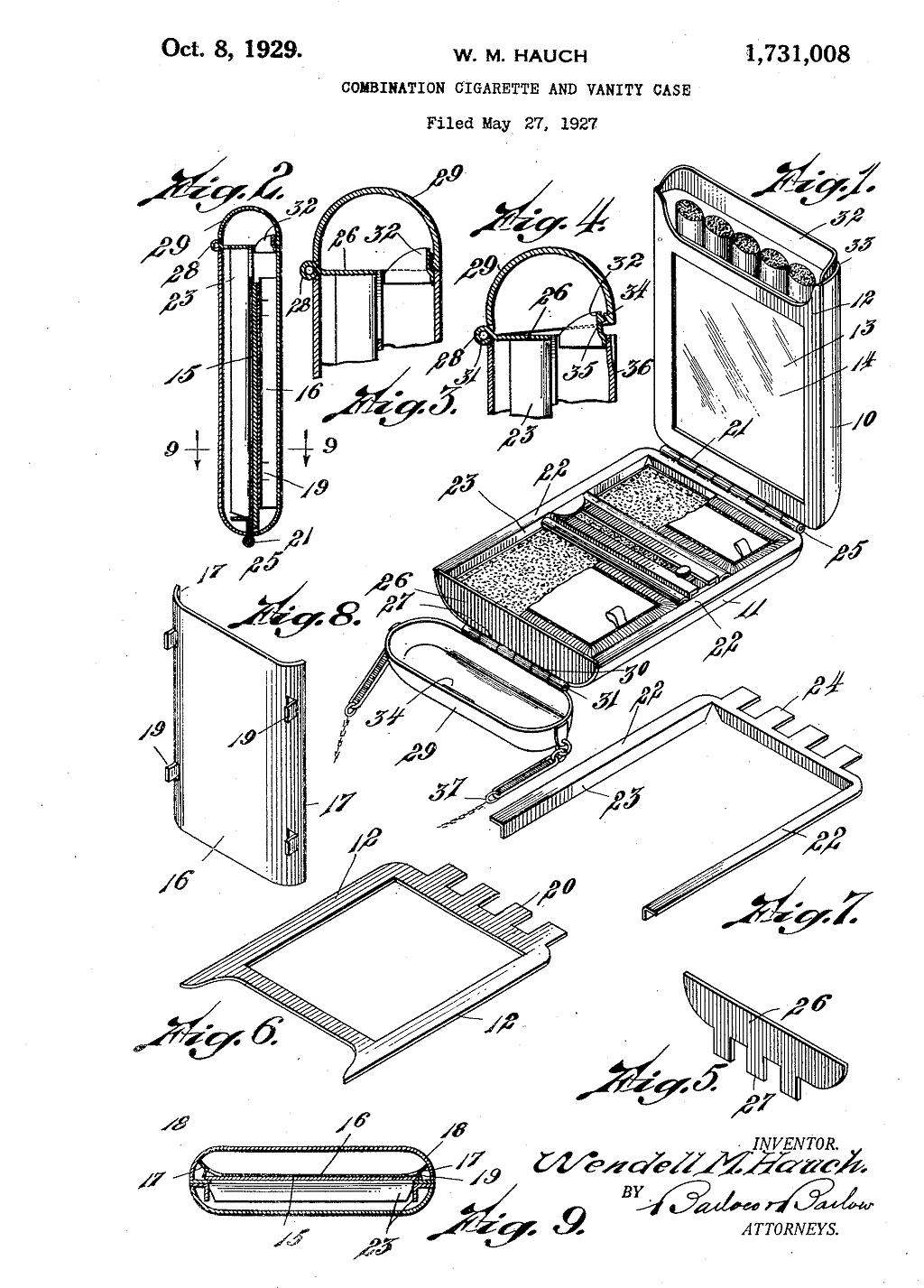 Another flip top design for Terri Inc. is the vanity case shown below. 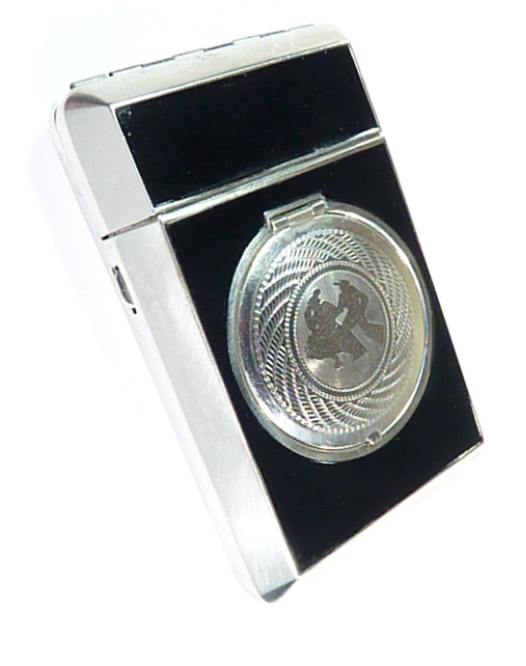 This hard to find Terri brand rhodium plate vanity case is decorated with the famous Spanish Dancing Couple on the front. The small round lid lifts up to reveal a round mirror and the original Terri face powder with the grease proof protective cover & Terry signature stencil intact. The face powder puff fits neatly into the recess under the round lid. The case measures 3 1/2" X 2 1/4" & weighs 152.6 grams. 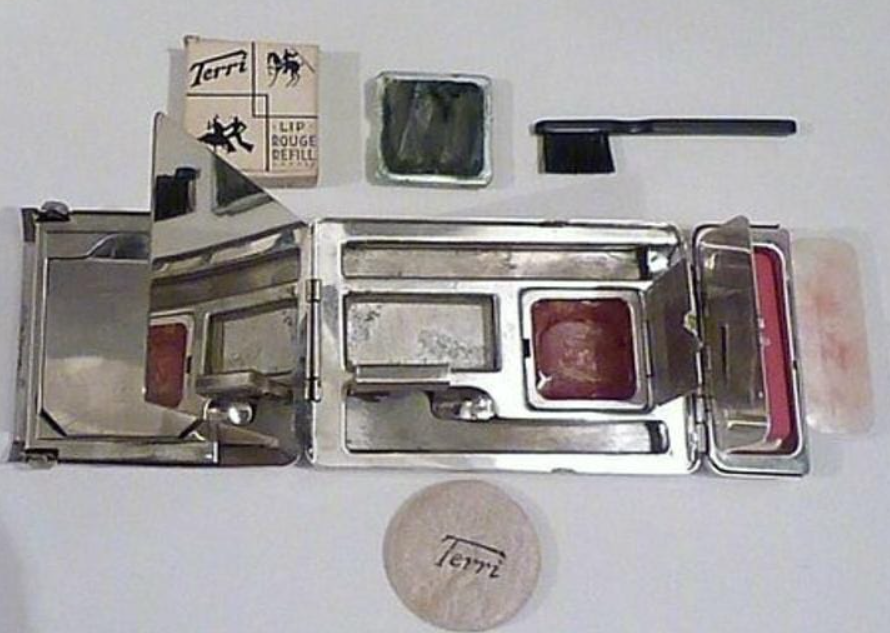 The signed puff shown above is the one which fits into the round lid mounted on to the front of the vanity case. The unused rouge still with the Terri stencil intact & the original grease proof protective cover is shown on the far right. The original Terri 'Raspberry' lipstick rouge is also present and complete with its adorable little box with the famous Spanish Dancing Couple logo decorating it. The original unused eye brow brush has a rhodium retaining clip/holder which is shown on this image. As is the original dark green eyeshadow (still with the packaging sealed).

As well as the combination and vanity cases the Terri brand also offered a line of small portable compact mirrors.

The most famous Terri brand vanity was designed by Bernhard Krueger. This patent was published on October 17 1933. This design was crafted from Bakelite. There was a choice of four colours, black, red, blue and green. 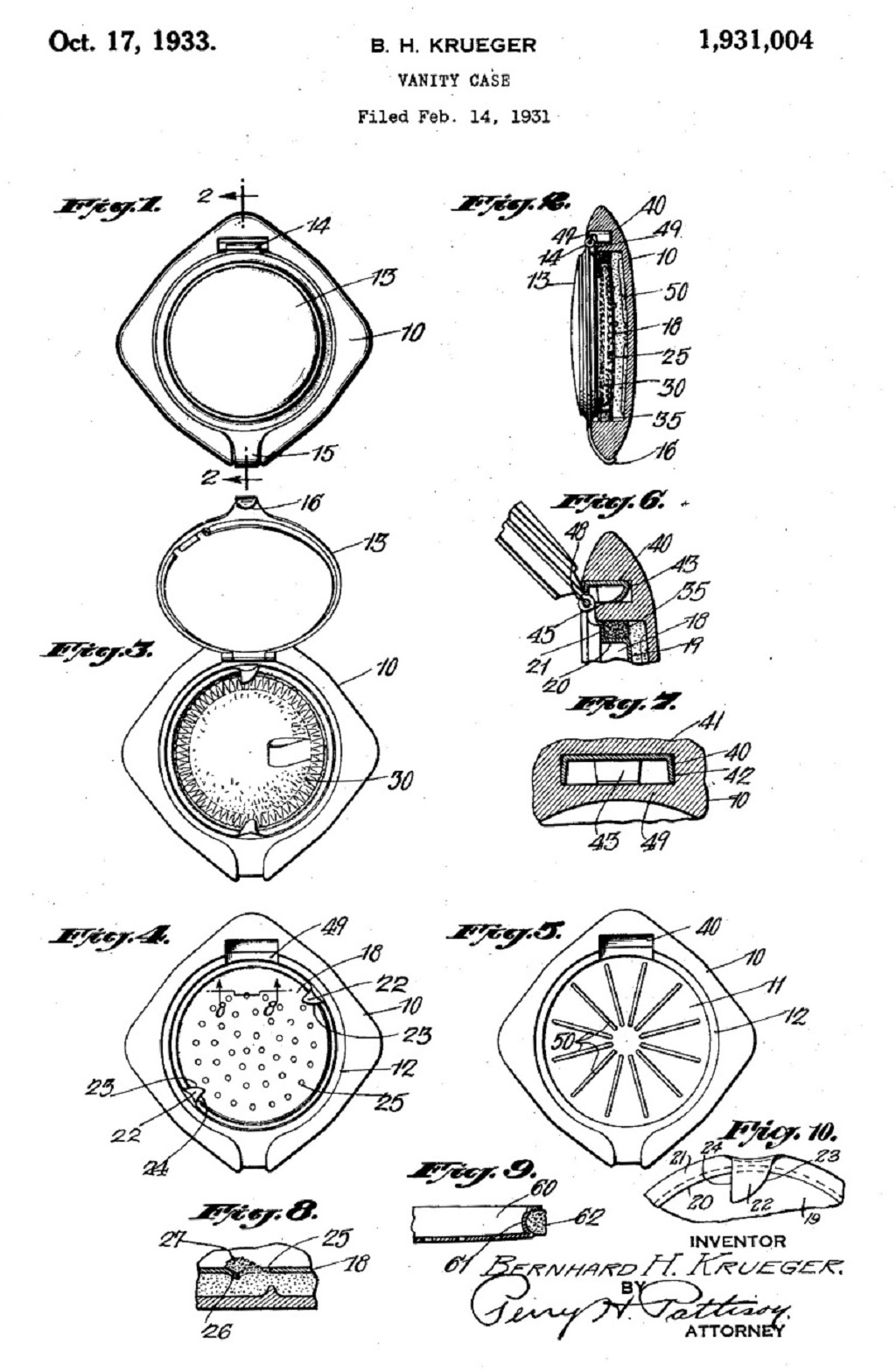 The Spanish flamenco dancers is the most well known of the Terri lines. Spanish names and Spanish themes set this brand apart from all the American firms using French names and formulations to market their toiletries. So hard to find, especially in an unused condition. This very stylish compact dates to 1931 which is when Kreuger applied for the patent. An iconic Art Deco Bakelite compact mirror! The lid is black Bakelite with the delightful Terri logo and fittings in gleaming chrome. The 'TERRI' signature is just near the thumb catch. 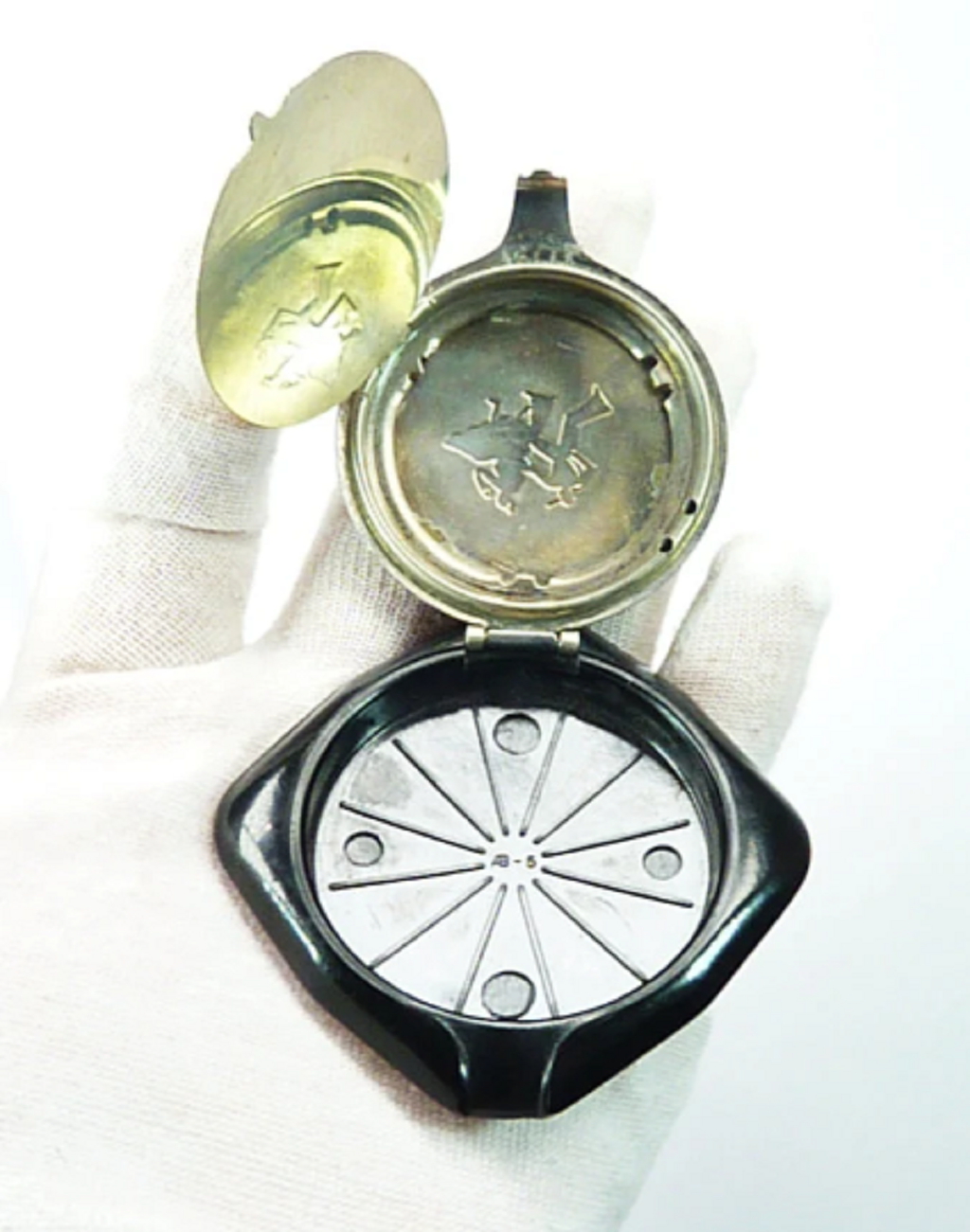 On lifting the lid the Bakelite powder well is visible, unused with 'AB - 2' stamped on to it. A metal double mirror on a hinge gives a good reflection for a metal mirror. The mirror swings open to reveal the shiny chrome with the Terri logo in reverse and the chrome fittings for the rouge. The base is black Bakelite and just as pleasing to look at as the rest of this famous vanity. The Bakelite and chrome are uniform colours and there are no light patches or discolouration at all.

This model is the double case for loose powder and the lid is fitted with a bezel to hold rouge too. Typically in this era the rouge compartment holds approximately half of the amount that the face powder compartment does. Measures just over 2 " & weighs 27.1 grams. 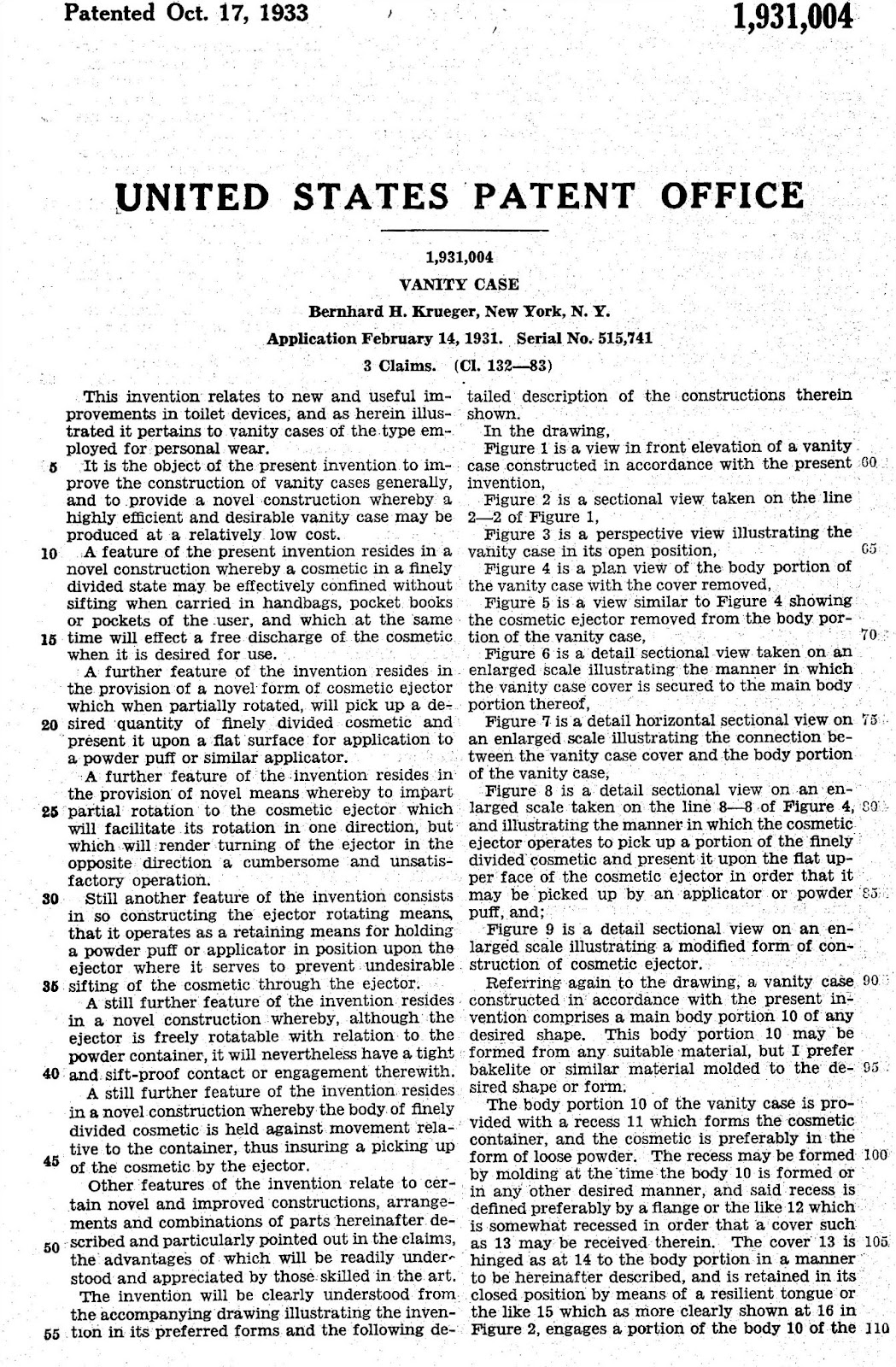 A wonderful Art Deco Bakelite compact mirror. The lid is royal blue and the rest of the case is dark blue Bakelite with the delightful Terri logo and fittings in shiny  chrome. The 'TERRI' signature is clearly visible. The Bakelite and chrome all look as though this compact has spent the last 90 plus years in a cabinet.