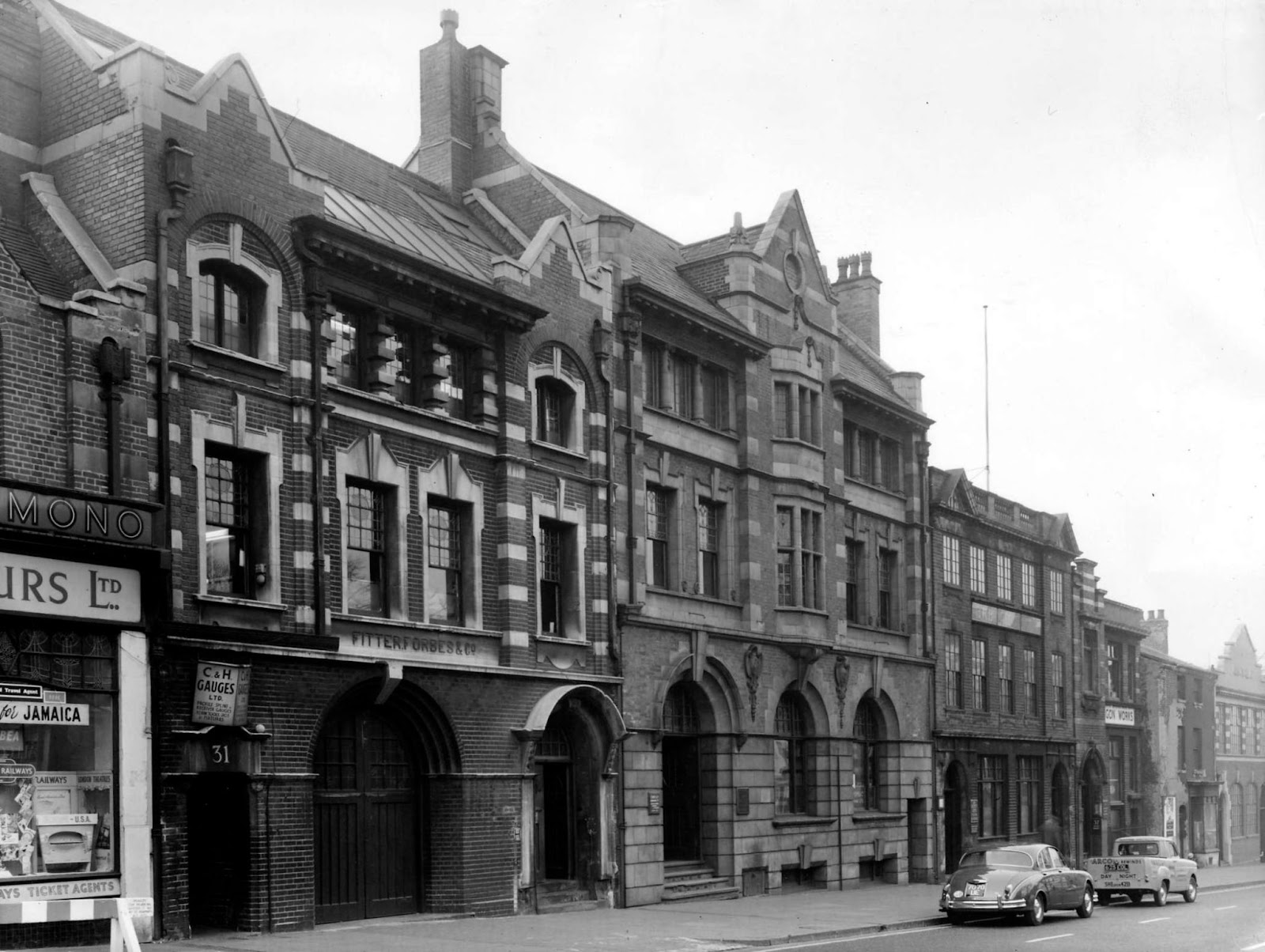 The company which manufactured Le Rage brand vanities and accessories was known as Evans Components Co. Ltd. The firm was located at the Paragon Works, 37 Hockley Hill, Birmingham 18, England. It is likely that the premises also housed other businesses, as a manufacturing jeweller named Walter Needham Ltd. was also using this address for business.

The car on the far right is parked nearest to The Paragon Works, Hockley Hill. On the facade we can just about see the end of the signage…GON WORKS.

It is thought that the firm began trading in the 1940s.

The brand name Le Rage probably originated from the phrase it’s all the rage. When I was growing up in the 1960s and 1970s I remember my mother saying "It’s all the rage" when describing fashions and the latest crazes. The origins of the rage can be traced back to 1785 when an extract from the European Magazine detailed the favourite phrases being used at the time as the Rage, the Thing, the Twaddle and the Bore. The full phrase it’s all the rage did not appear in print until 1870. In this context rage refers to passion and desire for something, as opposed to anger.

The prefix of Le was no doubt the desire of the company to appear exotic and stylish. Many British and American manufacturers of accessories, vanities and cosmetics borrow French sounding names to lend an air of sophistication to their brand.

At the height of production in the 1950s this manufacturer stated that they had a range of over 500 designs.

For some reason it has proved difficult to find these designs, although we have found patents which relate to this company. 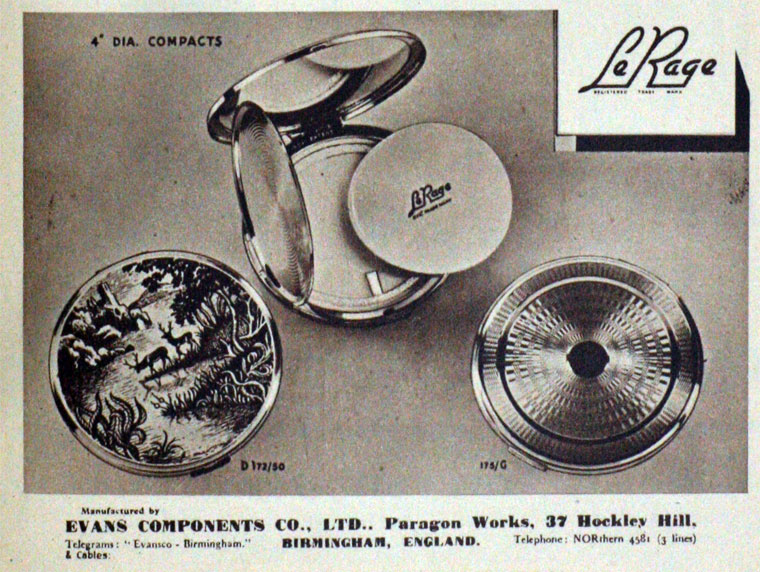 These were often referred to as ﻿flapjacks. 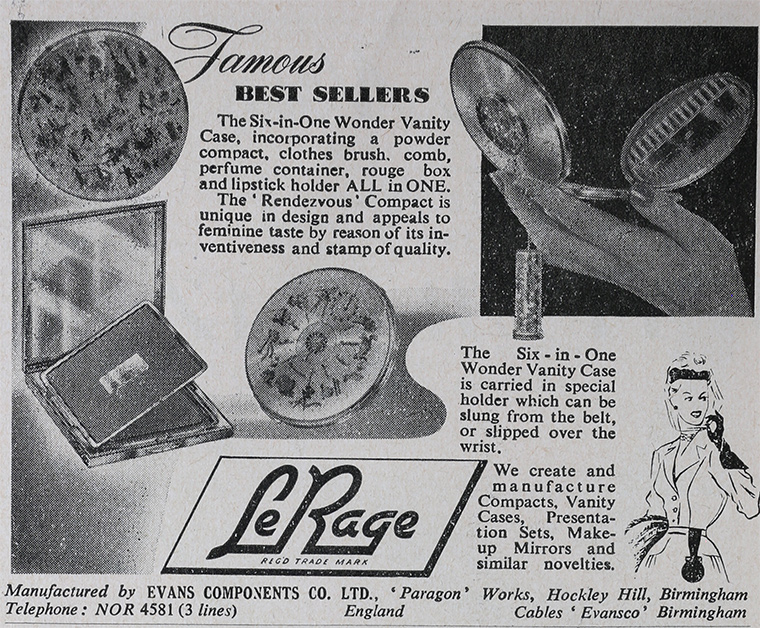 In this charming advertisement we can see a Le Rage London souvenir compact top left, a square loose foundation compact as well as the Rendezvous compact (middle) and also the Six-in-One Wonder Vanity Case (right).

On March 31 1954 the patent for Le Rage Six-in-One Wonder Vanity Case was published.

The inventors are listed as Henry Chaim Lerner and Robert Neuschul. 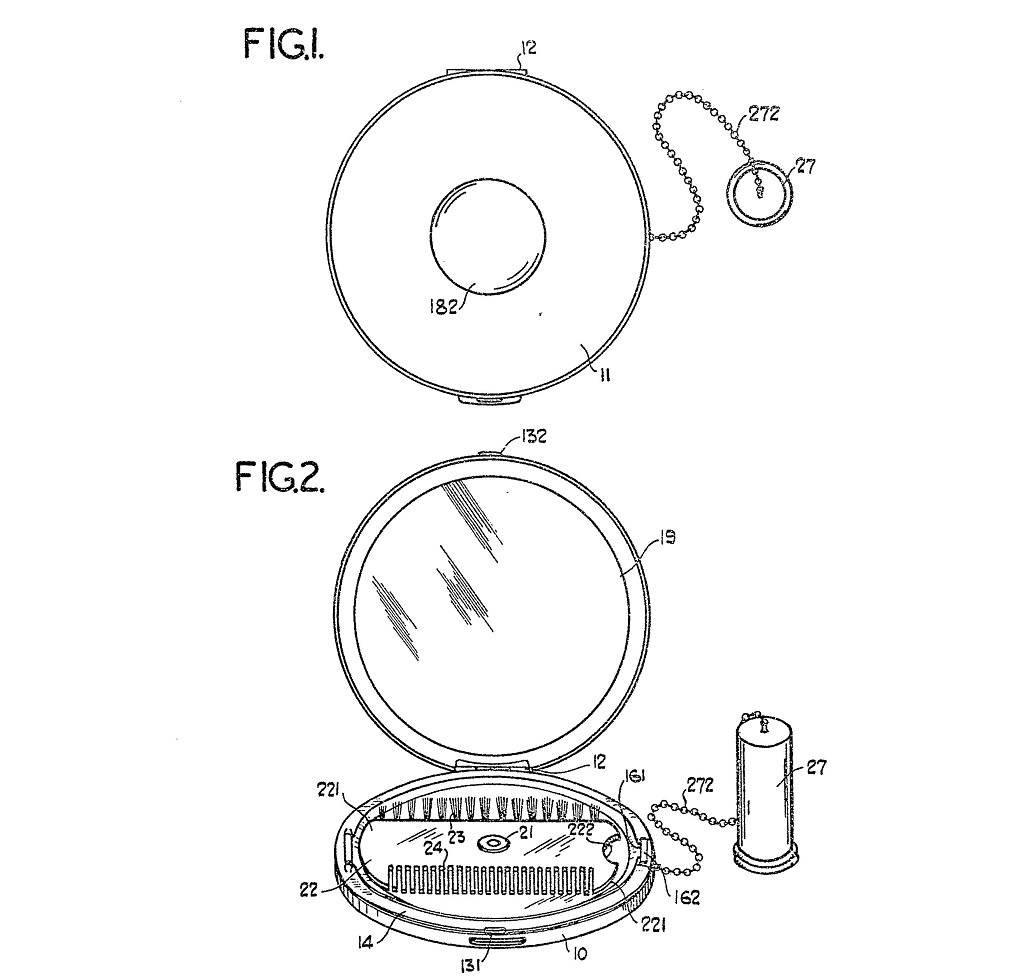 Figure 1 shows the aerial view of the vanity case when closed.

Figure 2 shows the vanity case open with a mirror secured by a bezel. The inner lid is shut. The fitted combination comb brush sits neatly on the inner lid. 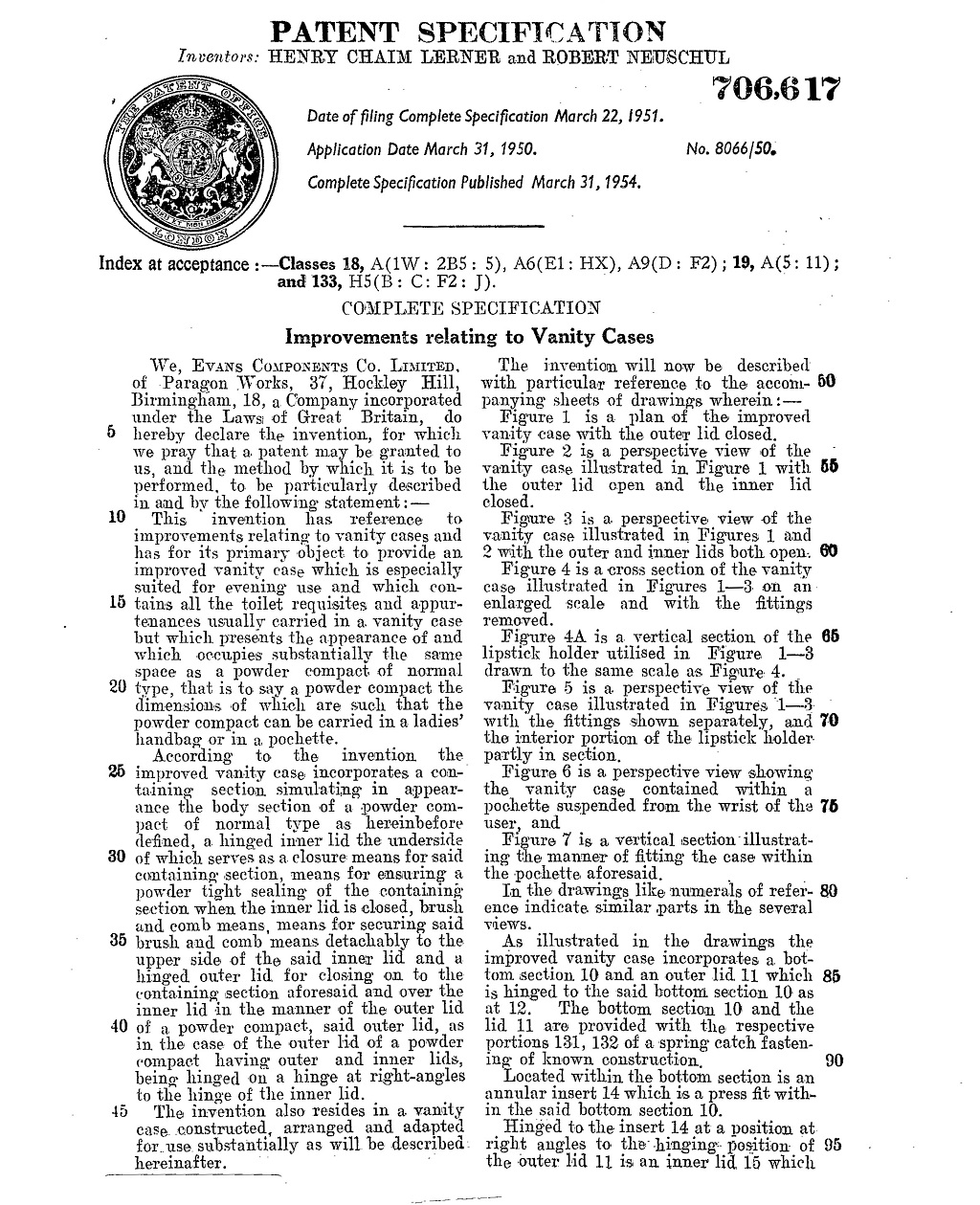 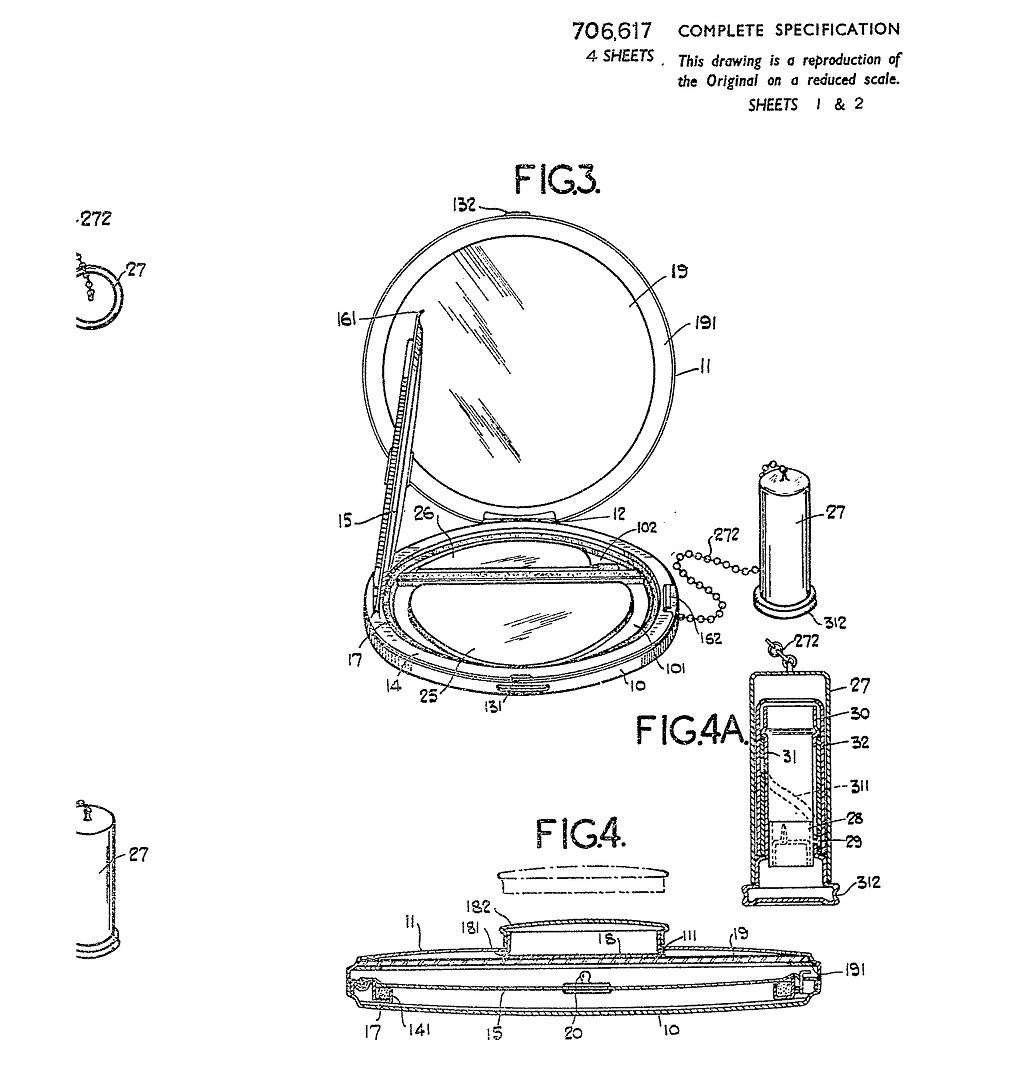 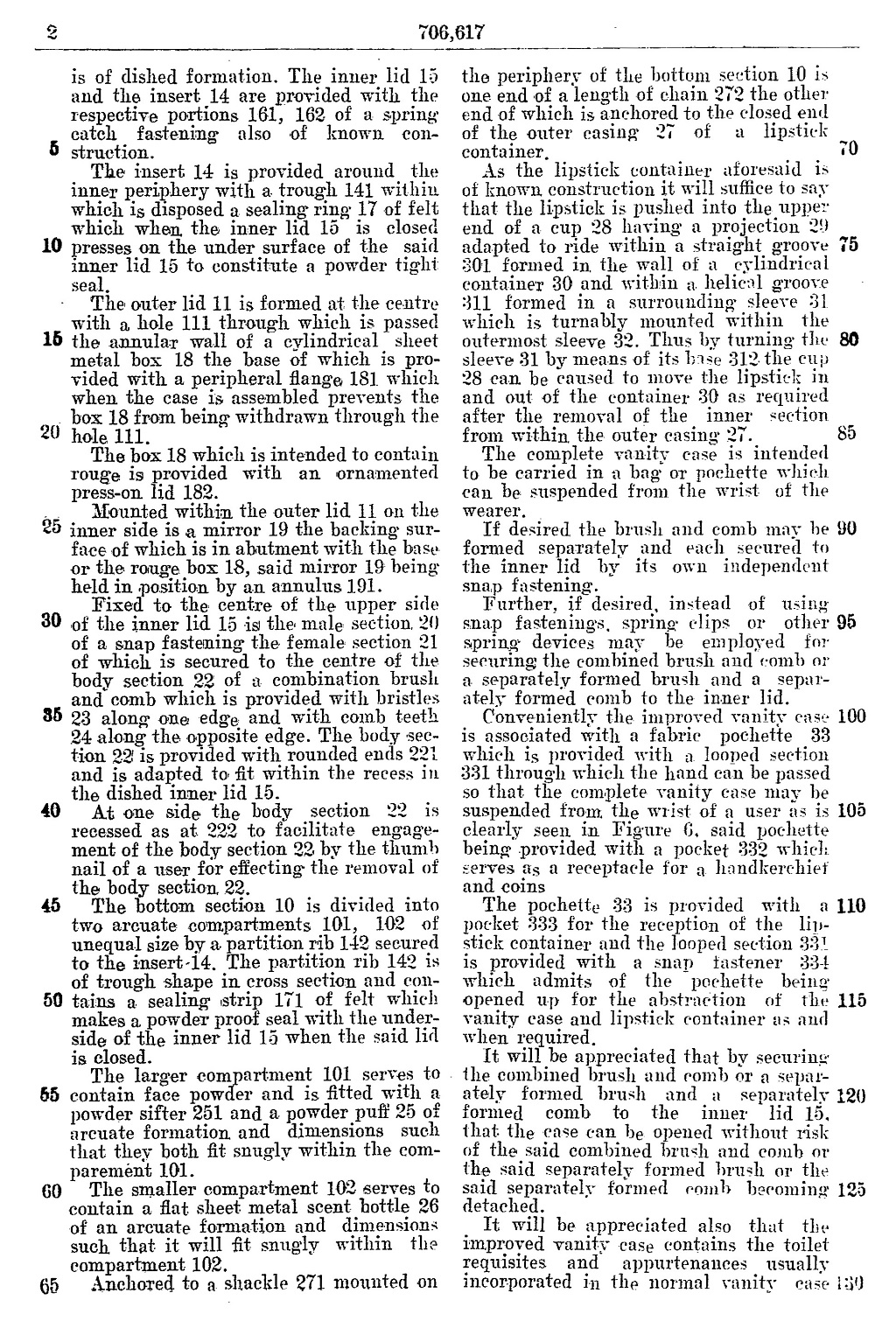 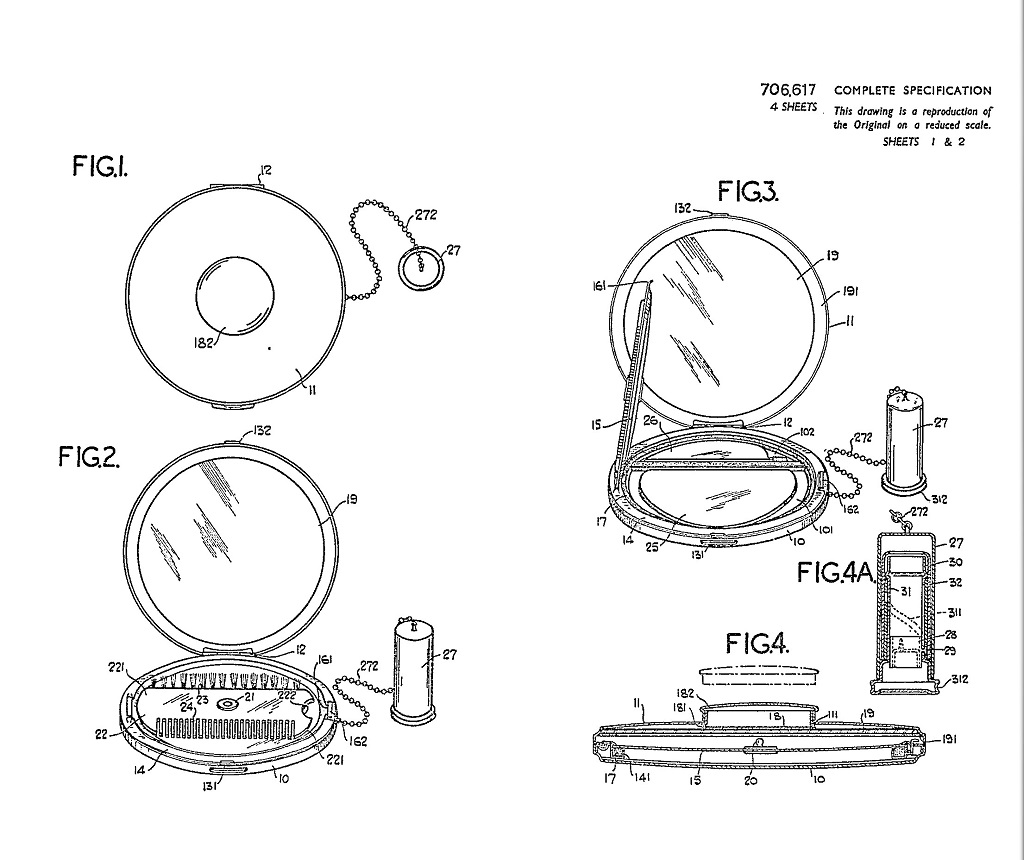 FIG.4.
The box (18) which is intended to contain rouge is provided with an ornamental press-on lid 182 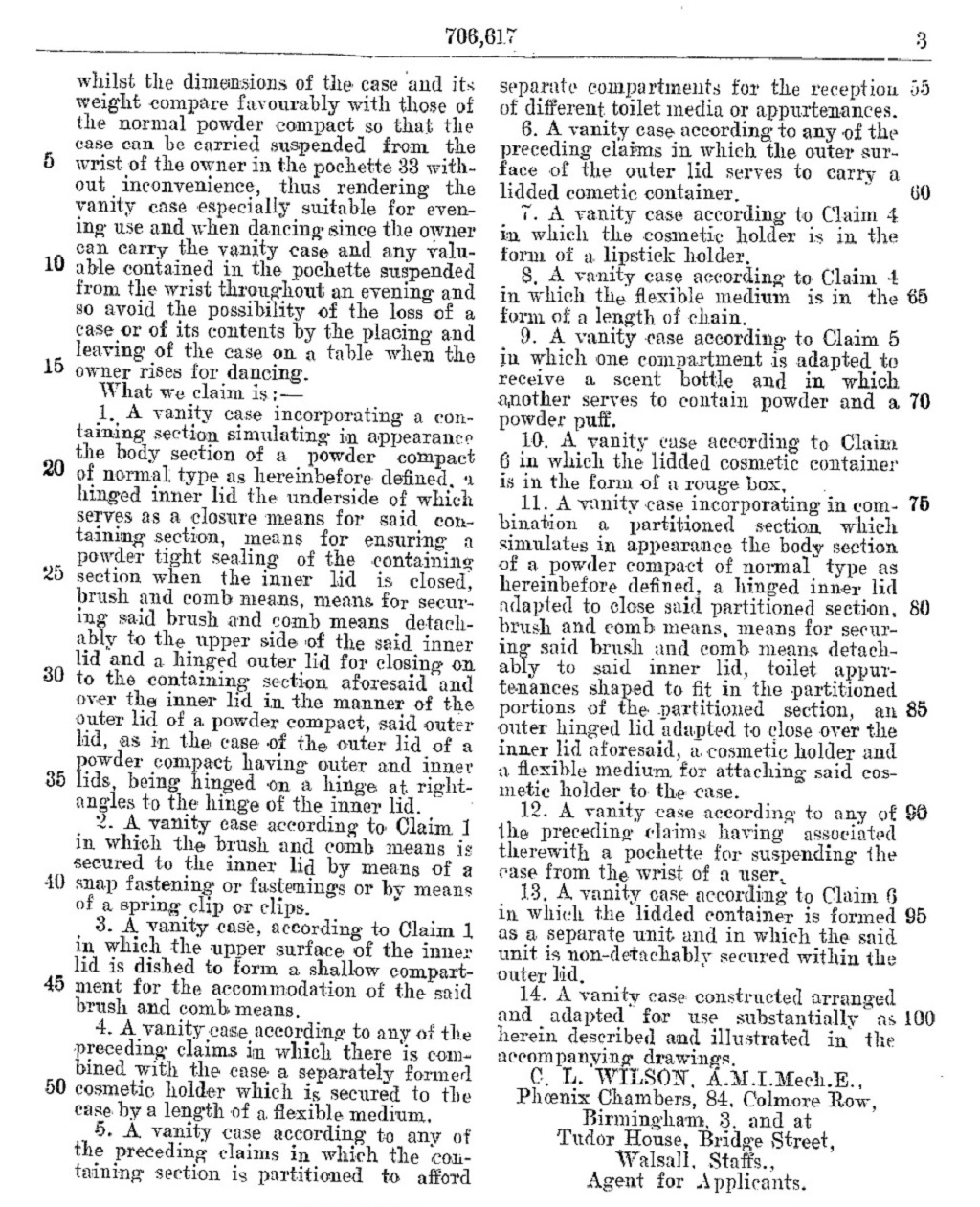 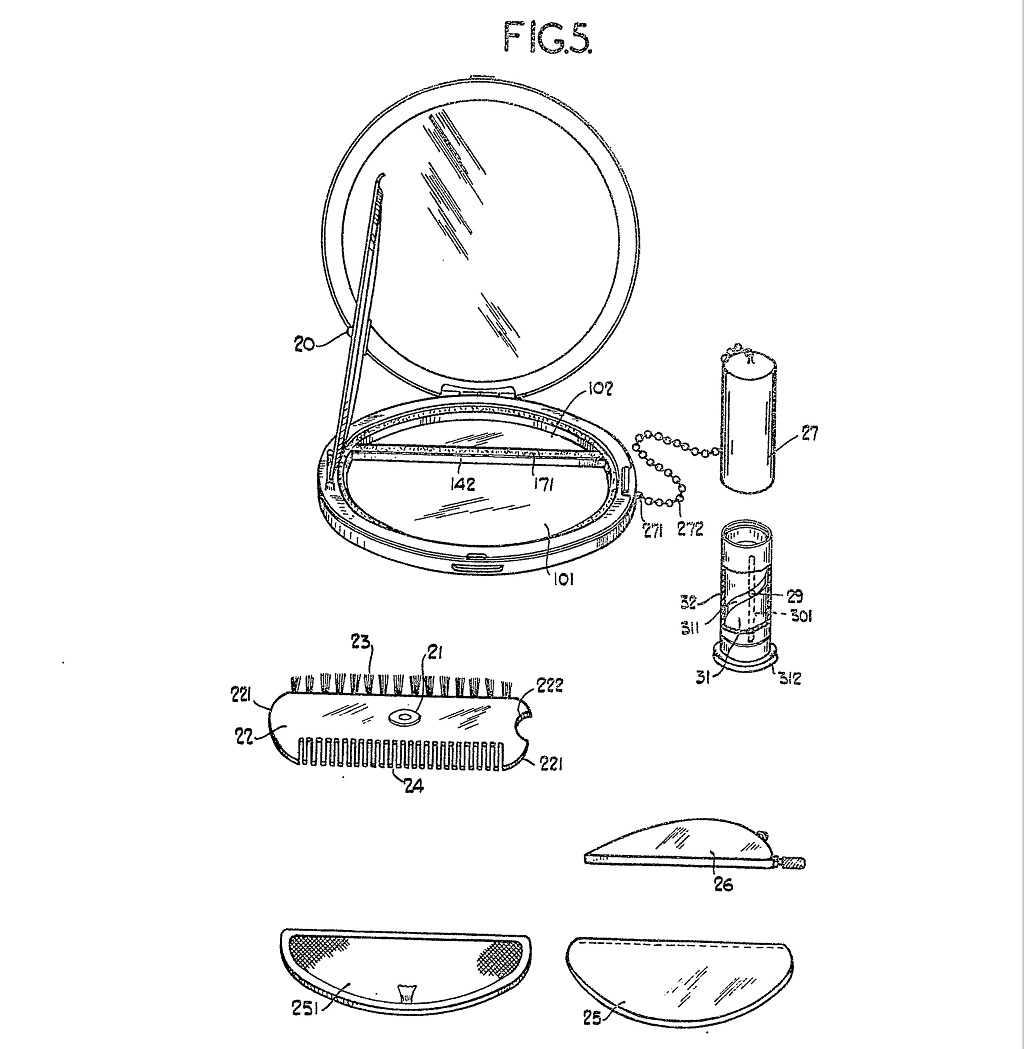 FIGURE 5 SHOWS A PERSPECTIVE VIEW OF THE VANITY CASE

The larger compartment 101 serves to contain face powder and is fitted with a powder sifter (251) and a powder puff (25) of arcuate formation and dimensions such that they fit snugly within compartment 101.
…a flat sheet metal scent bottle (26)
The complete vanity case is intended to be carried in a bag or pochette
which can be suspended from the wrist of the wearer.
…a combination brush and comb which is provided with bristles (23) along one edge
and with comb teeth (24) along the opposite edge. 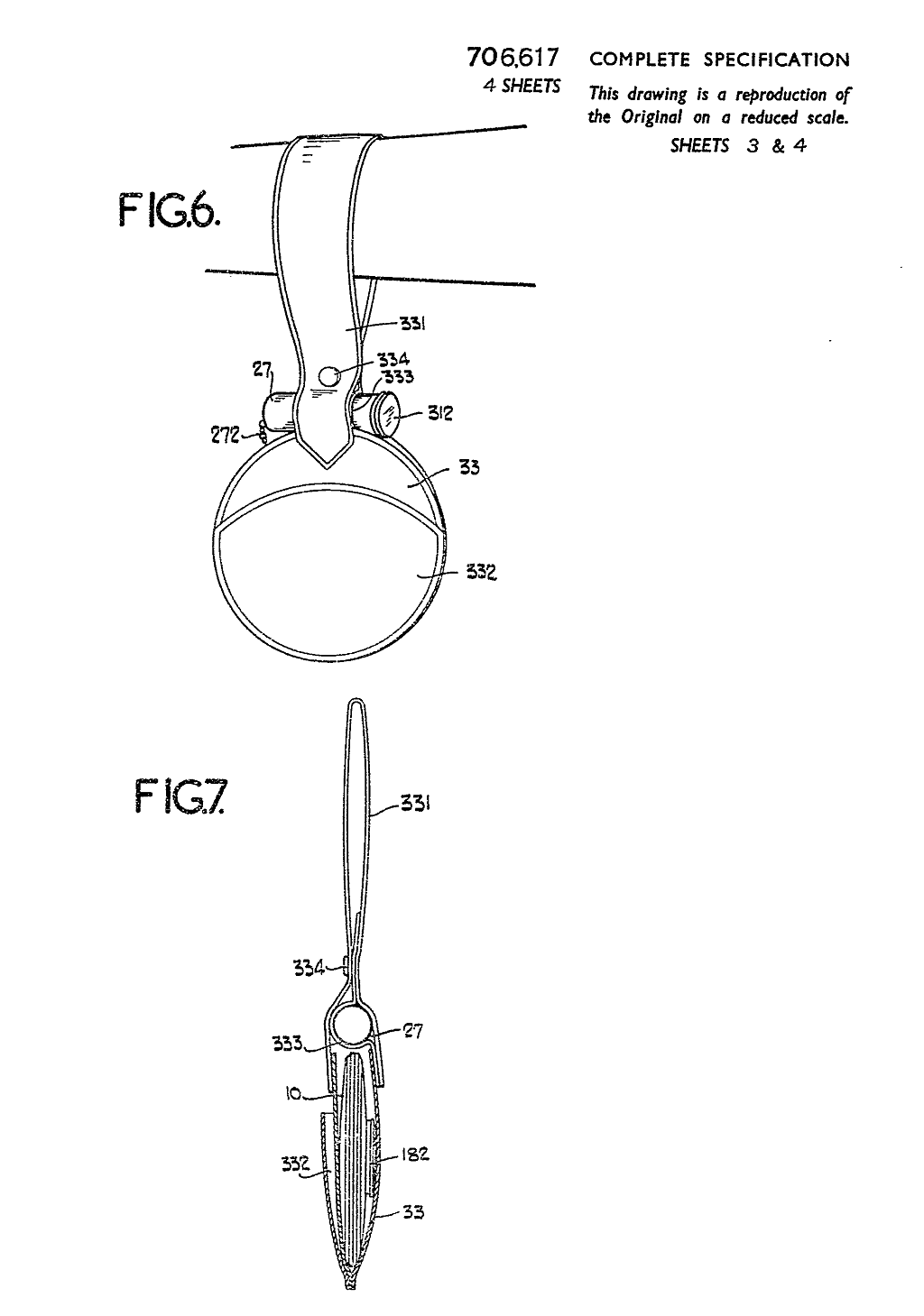 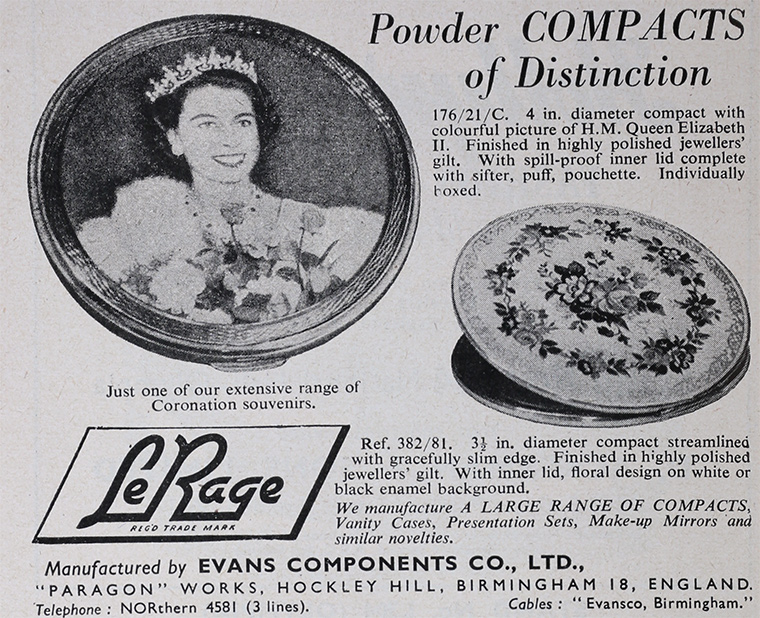 The coronation of Princess Elizabeth in 1953 and the popularity of Queen Elizabeth II provided a much needed boost for British trade. At this time most manufacturers of vanities and accessories liked to trade on their links to the royal family through their British history. The advertisement shown above depicts one of the Le Rage Coronation souvenirs. 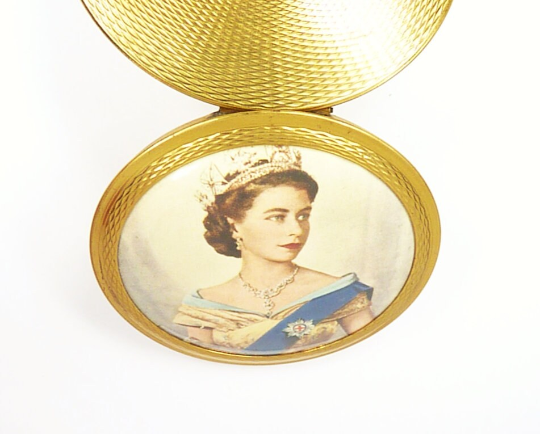 Another Le Rage Coronation souvenir compact is shown above. HM The Queen is looking extraordinarily beautiful in this delightful portrait.

The makers described the compact as -

Fit for a Queen!

Evans Components Co. Ltd. were exhibitors at The British Industries Fair in 1953.

Their trade listing shown below gives an indication of the range of goods they manufactured. 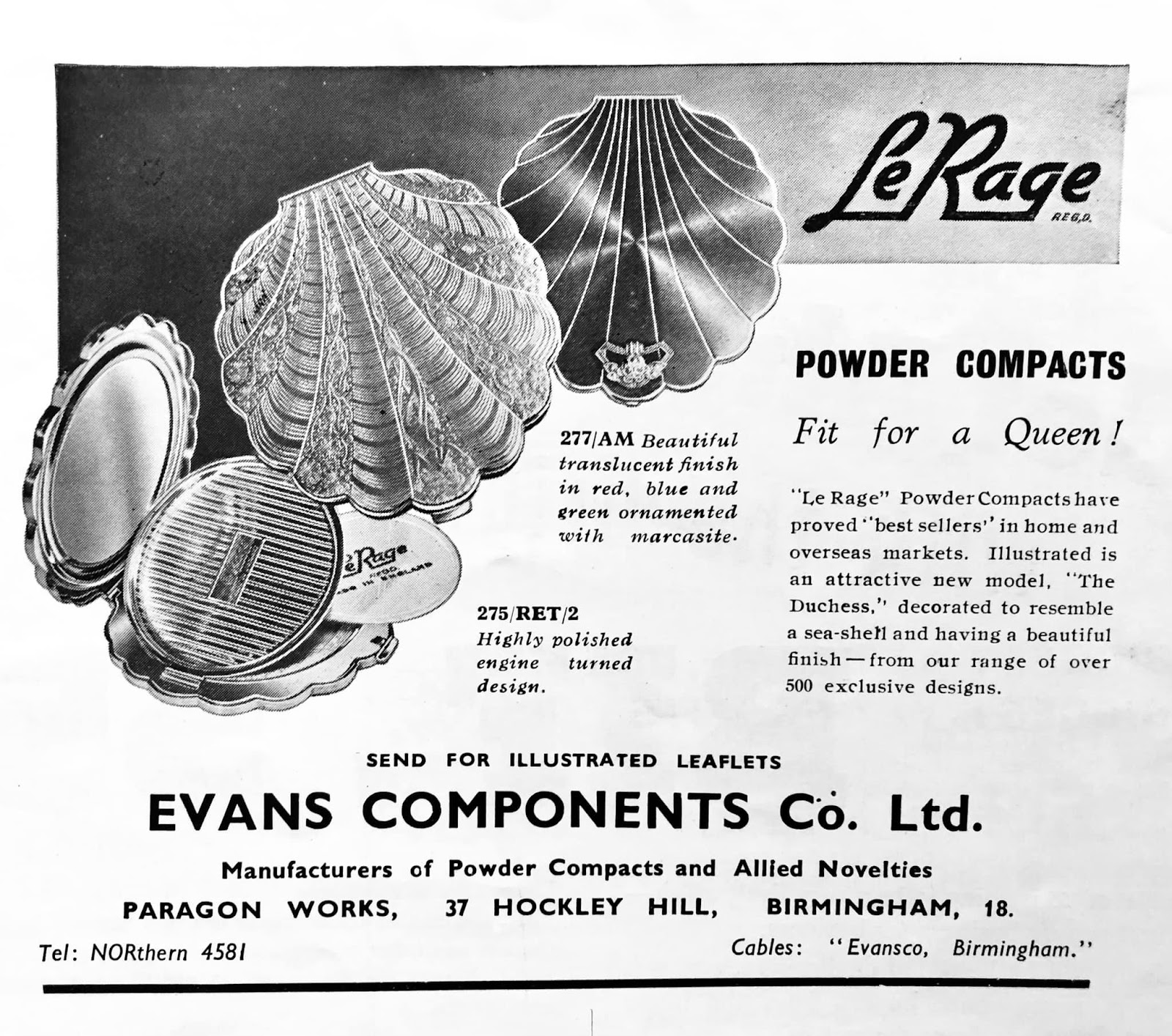 The clam-shell shaped loose foundation compacts shown above were named The Duchess.

One of the most collectible of The Duchess models is one which features a mermaid. The whole compact has a gilt finish just like the example in the middle of this listing which features ornate engine turned designs.

The other compact shown with its lid shut is The Duchess 277/AM. This model was available in red, blue or green enamel with a marcasite set jewel mount.

Other Le Rage models were adorned with marcasite encrusted decorations. As with all accessories the marcasite is actually pyrite.

Jewellers & collectors refer to pyrite used as a gemstone, as marcasite. It sounds a little confusing but marcasite jewellery is made from pyrite & not marcasite. Both have the same chemical composition but different crystal structures.  Marcasite is brittle & unstable which is why it is never used in jewellery or accessories. When exposed to moisture marcasite may release sulfuric acid.

When you are sold jewellery and collectibles said to contain marcasite you can be sure it is actually pyrite. In the late mediaeval era the word marcasite meant both marcasite & pyrite and so the borrowing of the term marcasite continues. 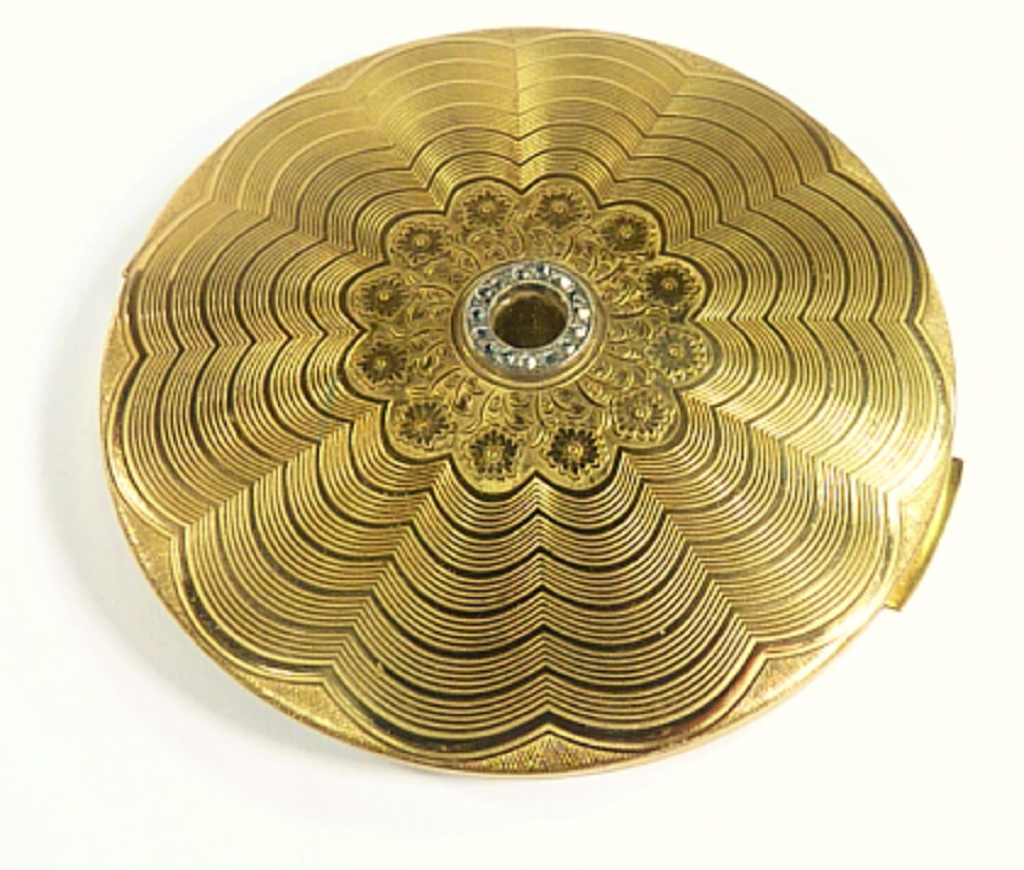 The magnificent Le Rage compact case with mirror shown above was designed for loose face powder. This super handbag mirror was made in the 1950s. The lid is decorated with an engine turned clam-shell design which resembles a stylized flower.  In the middle embossed gilded floral motifs and a marcasite ring which completes the eye-catching composition. The original puff and sifter are present. The inner lid is signed Le Rage MADE IN ENGLAND.

As you can imagine the coronation in 1953 created great interest around the world, especially in the Commonwealth. As a result of this there was an increase in the numbers of tourists visiting Great Britain, particularly London. 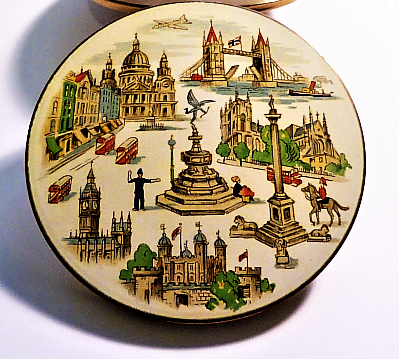 The loose foundation Le Rage compact shown above is decorated with white enamel.

Famous landmarks are shown in remarkably fine detail - London Bridge, Windsor Castle, St Paul's Cathedral, Nelson's Column, Palace of Westminster, Westminster Abbey and The Shaftesbury Memorial Fountain, which is often referred to as the Statue of Eros, when it is in fact Anteros.

On the Thames a steam tug chugging along & above a plane.

The buses are the Wartime London AEC RT Buses and they are seen in full wartime livery with regulation blackout lighting.

A flower seller is seated on the steps. A traffic policeman & a member of The Household Cavalry can also be seen. 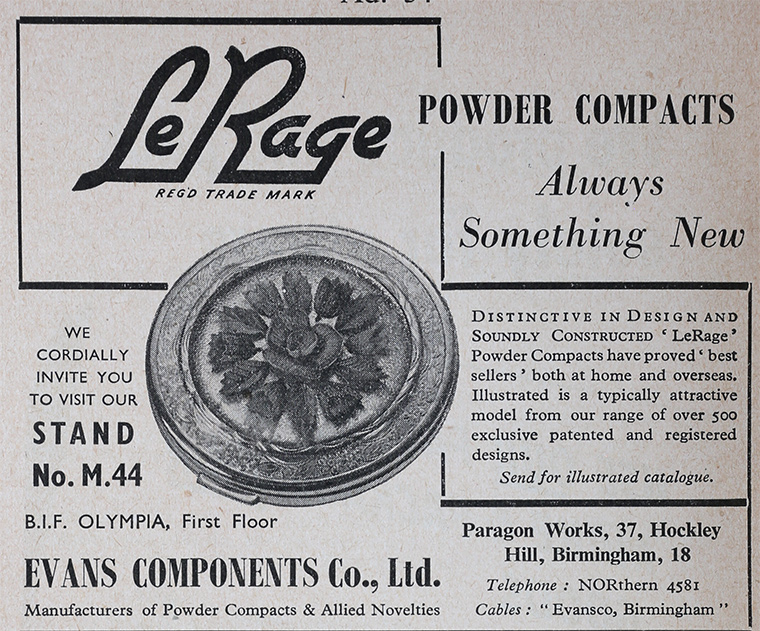 The compact depicted in the advert looks as though it is fitted with a Perspex (Lucite) floral decoration which would have been protected by a clear Lucite dome.

As we find more information we will update this blog post, as we do with regularly with our other histories.

More history of your favourite brands.