Walker & Hall was a very successful manufacturing business based in Sheffield, England.


The company was established in 1845 by George Walker (1816 -1881) who was an experienced electroplate practitioner and his brother-in-law, Samuel Coulson, who put up the capital needed to fund the venture.

Walker travelled to Birmingham to obtain a licence from Elkington which would grant him permission to commence his electroplating business in the Sheffield area.

Elkington had patented the electroplating process. They granted a generous annuity to Mr. Wright, the surgeon, who invented this process. The annuity was transferred to his widow on his death.

Prior to this, Walker had been electroplating for a firm owned by John Harrison of Scotland Street, Sheffield. He had left this employment when he feared that Harrison’s son would take his job. He refused to teach the young man the methods he had learned.

From 1848 - 1853 the firm traded under the name, Walker, Coulson & Hall, as Henry Hall had joined the business in 1848 and also financed it. The firm became known as Walker & Hall c.1853. Hall was a successful businessman and solicitor from Worcester. 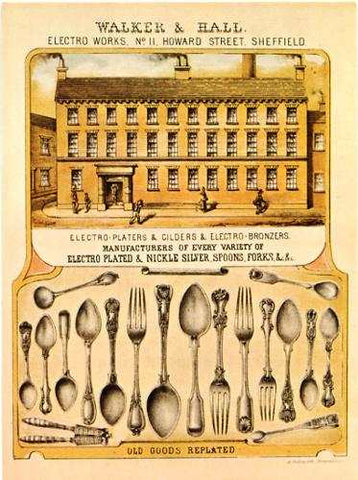 As well as producing goods, the firm offered replating services which kept their workshops at 11 Howard Street very busy. 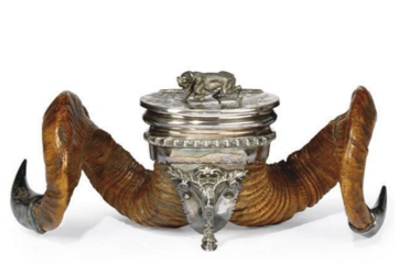 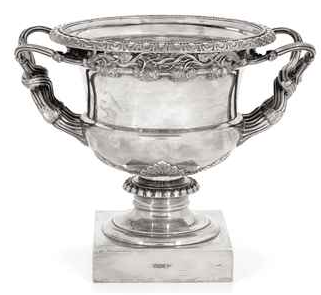 With plain sides, twisted handles and a frieze of fruiting vines below the rim, on pedestal foot

﻿John Bingham (Sir John Bingham) was known to have been a great 'showman'.


He was very flamboyant. He would talk of ‘thousands of hands’ working at the Electro Works situated at Howard Street in Sheffield.


People took ‘hands’ to mean the workforce. It was not strictly a lie, as each worker had two hands!


The company registered its first silver mark in 1862.

One of the reasons for this firm’s great success was that they cut out the need for a ‘middleman’ & set up their own showrooms on site.


The London showroom was particularly important and very profitable.

On New Years Day in 1865 Walker retired from the business.

The company became well known throughout the world for its high quality fully hallmarked silver.

They were particularly well known for their condiment sets and flatware. 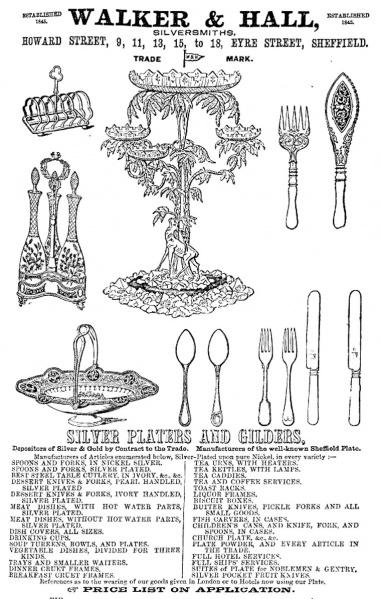 Walker & Hall stated that it was their firm that electroplated ‘the first useful articles’ in Britain.

However, this was not exactly true, as Elkington patented and practised this process.

Their main manufactory was located at Howard Street, Sheffield, while showrooms were opened at 45 Holborn Viaduct, London. 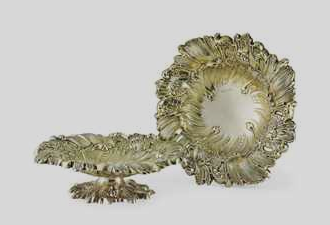 Shaped circular, on shaped circular foot, with rococo and trellis decoration, each marked on field and under base 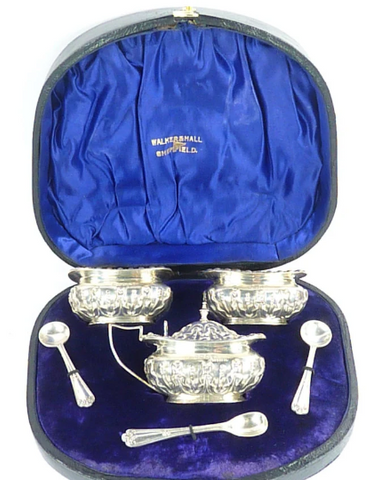 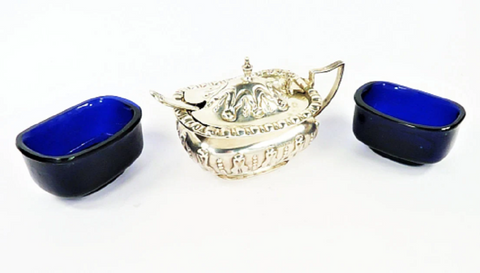 The original blue liners and spoons are present. 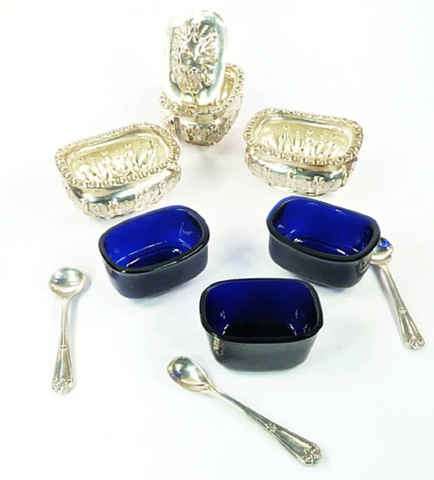 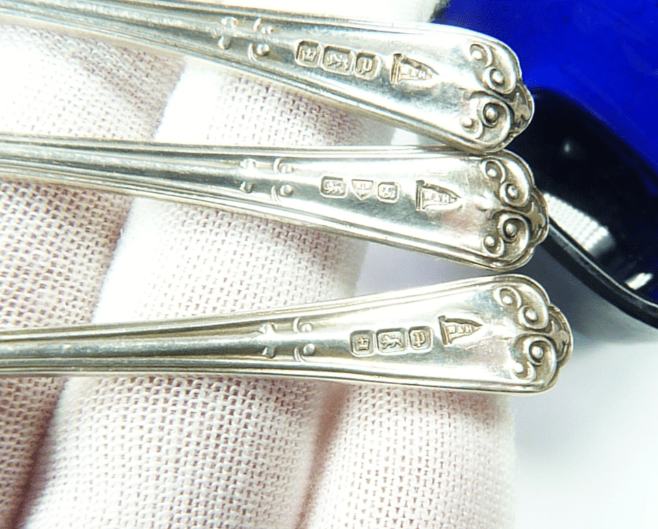 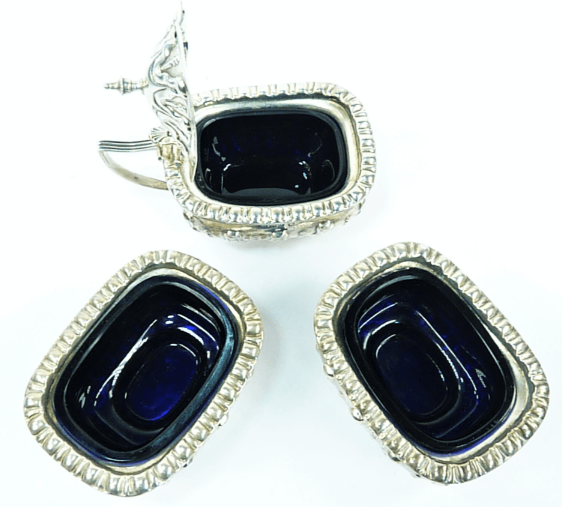 
In 1915 Colonel Sir John Bingham, Bart, VD, JP died aged seventy five years. Even at this age he was working longer hours than many of his employees. 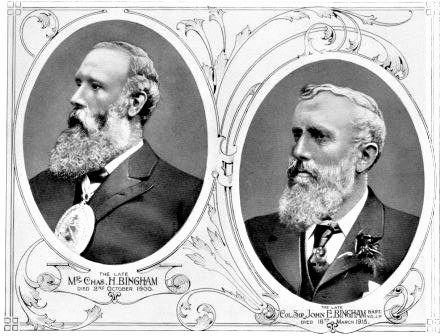 
By this time Walker & Hall were renowned throughout the Empire for their silver, cutlery & plate. Sheffield plate being the finest in the world. They owned fifteen showrooms in Britain with others in the Cape, New Zealand & Australia.

Sir John served two terms as the prestigious Master Cutler. It was very rare for a person to be granted this honour twice. His care of his employees was well known & he gifted Bingham Park to the people of Sheffield.

Sir Albert Bingham, son of Sir John, took over the firm on his father’s death. Unfortunately the huge success of his father was not to be repeated & it is said the firm only broke even under Sir Albert. This was probably not entirely Sir Albert’s fault as there was an economic downturn.

A designer employed by the firm, Mr Fisher, introduced Art Deco to their catalogue & the rest is history. 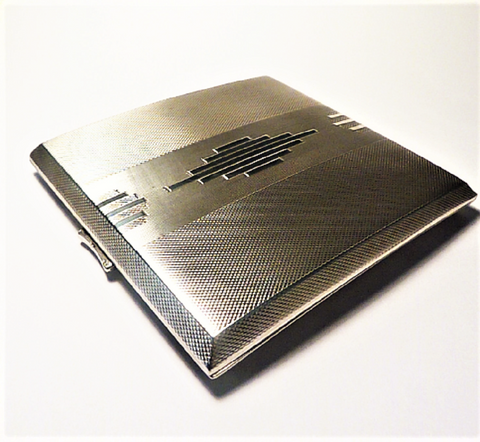 In 1945 Sir Albert died & his solicitor & trustee took over. Sir Douglas Branson was now the Chairman & the company was in a bad financial situation.

Sir Douglas asked for a member of the family to take on the business or it would have to be sold. Peter Inchbald stepped into the breach.

Peter Inchbald found that the retail sales were still profitable & it was the workshops that were losing money. He studied how the & business was being run & also whilst at the London showrooms he studied silversmithing at The Royal College of Art. Whilst there he met David Mellor, who was also from Sheffield. David Mellor went back home & tried to find someone to sell the modern cutlery he had made whilst studying at The Royal College of Art. This was considered exquisite by any standards. Peter Inchbald put the idea of selling this cutlery to the board of Walker & Hall & they were lukewarm about the idea. The design had to be modified, for example the ivory handles would be replaced. The silver plate version had handles made from white xylonite (Celluloid). The trade name was ‘Ivoril’ & it was marketed as ‘Pride’.

The showrooms of Walker & Hall were high class establishments with staff that fit the bill! When ‘Pride’ was first stocked in the very luxurious Oxford Street, London store the staff refused to sell it!

One day a gentleman came in with his new bride & purchased a set of ‘Pride’ silver. This gentleman was Ivan Sutton who was a concert impresario & as luck would have it, a liveryman of the Goldsmiths’ Company.

Peter Inchbald followed this success by cutting out nine tenths of the loss-making products. His designer, Peter Austin, was an innovator who mainly oversaw bespoke commissions. David Mellor became the official design consultant & a new ‘Pride’ tea set was produced. This was exquisite solid silver with leather bound handles as they got hot! Eventually the design of these rather special sets had to be coarsened & even the coarser version won a Design Centre Award too.

An insight into the working practises -

Spoon & fork buffing  - this was traditionally done by women. It was highly dangerous, filthy work which required a tough & highly skilled workforce. A fast spinning leather wheel was used to buff the cutlery. Sand & oil were also used  & the women were left as black as coal miners. Obviously the spinning wheel got hot & the women bound their fingers with rags. If these rags got caught on the spinning wheel the accident was highly likely to be fatal!

By the late 1950s Walker & Hall’s very fine silver was not receiving the attention it should have been by the workforce. Peter Inchbald stated that it now lacked quality. The workforce was heavily unionised & he had to think carefully about how to rectify the situation. The management knew that the future of the firm was to be manufacturing stainless steel.

After great effort & many new money making plans were put into place Inchbald knew it was no longer possible to make a profit. In 1963 an approach from Charles Core was made to take over the business. He had already taken over Mappin & Webb. A new merged company was formed called British Silverware. At this stage Walker & Hall still existed on paper & Peter Inchbald was in charge of design, although it was the end of an era.

'Jack of All Trades: And His Family'.