A Brief History Of Vesta Cases And Match Safes

What are vesta cases?

What are match safes?

Why are they called vesta cases?

How can I date my vesta case?

How can I spot a fake? What are vesta cases?

Vesta cases are small portable boxes used to keep matches dry. They are made from precious and non-precious metals. The purpose of the vesta case is also to prevent the matches from igniting. Usually the base of the vesta case has a serrated edge, known as the striker. The vestas (matches) are dragged across the striker to ignite them. There are three main types of vesta cases. The most popular being the portable pocket vestas. Some pocket vestas have a bale near the hinge so that they can be suspended from an Albert chain. Table or mounted vestas would keep the matches safe around the house. During these times a candle would light the way to bed and so another type of vesta was named the ﻿go to bed ﻿vesta. These were often attached to a candlestick holder.

Not all vesta cases are box shaped. Novelty vesta cases in the shape of boots, horseshoes, suitcases, books, people, animal heads, birds and even pigs proved as popular back in the day as they are in the 21st century. The maker of the charming novelty vesta case shown above is S. Blanckensee & Son. This piece was assayed at Birmingham in 1883. The striking plate is just about visible at the bottom in the middle of the case.

Novelty vesta cases were also made from brass and base metal. The extraordinary collection shown below were auctioned at Christies in 2011. There is even a Huntley & Palmers biscuit! Why are they called vesta cases?

These cases take their name from the virgin Roman goddess of fire, home, hearth and family. Usually Vesta was depicted as the fire in her temple. Only Vestals (her priestesses) were allowed into her temple. Her association with fire made her name the natural choice for British companies who manufactured matches.

What are match safes?

In the United States these cases are known as match safes because they keep the matches safe in a non-flammable case.

In 1832 an Englishman named William Newton patented a match named the wax vesta. The vesta had a tip of phosphorus and a wax stem over cotton threads.

In days gone by matches were used to light lanterns, fires and stoves and so almost everyone needed a vesta case.

At one time matches were known as strike anywhere matches or vestas. As the name suggests these matches would ignite when struck on many different surfaces, making them quite dangerous. Hence the need to enclose them in a metal case.

Swan White Pine Vestas were made by the Diamond Match Company. These matches were thin wooden splints soaked in wax.

The name Swan Vestas was adopted in 1906 when the Diamond Match Company merged with Bryant and May.

Swan Vestas were a little shorter than other household matches and so they became very popular with smokers. The tagline the smoker’s match was used in promotional material. Matches were known as vestas for a long period of time.

By the 1930s Swan Vestas were Britain's best selling match. Necessary accessories would often become status symbols and this is true of vesta cases. Back in the day some of these vesta cases would be presented with a matching or themed cigarette case. One such set is shown above. This rare nineteenth century French sterling silver smoking set is embellished with manticores.

The choice of a mythical hybrid to adorn these cases makes them highly collectible. The description of the manticore varies from the era to the country of the story teller. Even today manticores feature in highly popular books and films, such as the Harry Potter series. Manticores have been described as having the head and body of a lion or lioness, the tongue and tail of a serpent or lizard and the wings of a dragon or bird.

In this instance they have the head and body of a lioness, a lizard-like tongue and tail and the wings of a bird. Some manticores are depicted with human heads. The fronts of the cases have splendid manticores looking very fierce indeed. Just below the creatures are scroll-like cartouches and the whole repoussage decoration is superb, ornate and complex. The backs of the cases have the same attention to detail and incorporated into the design emerging from the foliate, the head of the manticore - sleek, lion-like and fierce. Both cases are fully hallmarked and bear the maker's mark of Charles Murat. Here is a smoking set comprising of the original presentation case which contains the unused cigarette and vesta cases.

This set was originally retailed by the notable jeweller, horologist & goldsmith J. Hamon from their store situated at 55 Rue de Siam in the sea port of Brest and so the subject matter for these smoking accessories is appropriate.

The wave and sea foam protect her modesty to a certain extent.

The original presentation case is marvellous, the whole of it clad in green brushed velvet, with no loss of velvet. The interior lid is lined with cream silk and in black lettering we see - J. Hamon ORFEVRE 55.Rue de Siam Brest. The green velvet lining the interior base of the presentation case is so gorgeous and looks like the most beautiful moss you have ever seen.

As well as being status symbols the ever present vesta case was an excellent form of advertising. 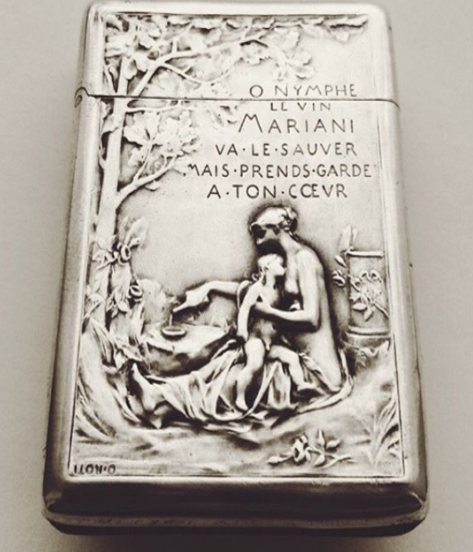 This piece was made as a high quality promotional VIP gift for the opening of the prestigious Vin Mariani winery in Paris.

Read the wonderful history of the Vin Mariani vesta case.

Silversmiths catered to all manner of tastes. Whether it be for clients who wished to see Christian imagery adorning their cases, for nudes, as we see in the Charles Murat set or simple and stylish engine turned designs, which prevent the appearance of fingerprints. The rare vesta case shown above shows an angel playing the violin, seated on a cloud. Her hair, features, robes & the cherubs are well executed. Made in France at the end of the nineteenth century, this is a piece of great charm. The repoussage decoration also depicts two doves & cherubs reading from a musical score. 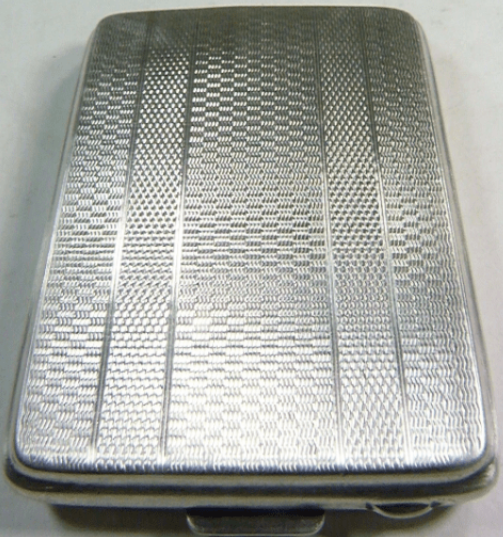 The hallmarked silver case shown above can be classed a vesta case, although it is more of a match book holder and it does not have a striker on the base.

Perhaps the most famous vesta cases crafted by Sampson Mordan are those which depict soldiers. This case is in the form of a sentry box with an enamelled scene. The lid is stamped with the Patent Office Design Registry number 38283. At the base you can see the serrated edge which serves as the striking surface. This case was assayed at London in 1886.

Please be aware that there are reproductions of the Sampson Mordan military themed vesta cases which are not by this maker. They are not fully hallmarked. They bear no date year or maker's marks.

They are stamped STERLING. Without any information about the maker and no date hallmark they could be modern reproductions. They are in no way as valuable as the original Sampson Mordan pieces.

Vesta cases were also incorporated into the designs of vanity cases. Since many small portable vanity cases would include compartments for cigarettes there was also a need for space to store vestas safely. This 9ct yellow gold Edwardian necessaire was imported into England by the jeweller & importer Paul Ettlinger in 1904. This superb treasure is hallmarked on the lid, base, & interior compartments. The exterior case is the most exquisitely beautiful hammered gold & comes complete with the original writing implement and snakeskin pouch. The main thumb catch & the three other access points are set with ruby cabochons. The image above shows the cigarette compartment on the left. Bottom right is the vesta case. Top right is the powder well. The name nécessaire was given to small portable vanity cases, as they would carry what the owner considered necessary. Paper money would often be folded up neatly and placed under the elastic band which would have been used to prevent the cigarettes from falling out.

These cases were often called combination cases, as they served several purposes. This charming antique combination case was assayed at Chester in 1921. The case was crafted by E J Trevitt & Sons

How can I spot a fake?

Vesta cases embellished with enamel scenes are highly collectible. However, the potential buyers should be aware that some of these are not enamel. Some are 21st century laminated scenes applied to the silver cases. Some hallmarked silver cases are adorned with laminated images which were designed well after the silver cases were made.

For example - if you see a silver case with hallmarks which date to the Victorian era and the front is decorated with an image of a 1940s pin up you know this is not original to the piece.

How can I prevent myself from buying a fake?

Many people would reply to this question by stating that you should buy from a reputable seller, which is good advice.

However, the British hallmarking system is also a tremendous aid to dating and therefore authenticating.

Whilst reproductions are not fakes, it is important that the seller should date their collectibles correctly. Twenty-first century silver vesta cases are being manufactured which have the appearance of Victorian and Edwardian cases. However, knowing the place of assay and date year will allow you to date each item. Do be careful to look at the font of the date year letter and also the cartouche which surrounds the fonts. This chart is a small sample of the information provided by the Birmingham Assay Office. We can see that each year has a date letter. As the alphabet is repeated throughout the chart the font of the letters change. Often the cartouche around the date letter is also different. The anchor hallmark represents  Birmingham Assay Office. The lion passant mark is for sterling silver.

All the assay offices in Britain have online resources which allow us to date our collectibles.