Traditionally these silver pieces were hand carved & the niello was created by baking 50% sulphur, copper, silver & lead which forms the black enamel like coating on the French silver Louis Morteveille vesta case shown above.

These materials would be heated to very high temperatures to form a coating for the silver. The items would then be engraved again. Nielloware was particularly popular in the 13th & 15th centuries but very few pieces from these times survive. The process to produce nielloware is quite demanding as you can imagine. Nielloware pieces are often made from high grade silver.

Niello was used as an inlay on accessories especially sterling silver vanities, vesta and card cases. The silver would be keyed to provide a base for the niello design. In ancient times equestrian equipment, sword hilts, jewellery and belt buckles would be adorned with niello. Eventually, enamel became much more popular than the niello, as it has much wider colour and design possibilities.

The use of niello for decorative purposes was well known in ancient Europe, as well as in Asian countries. Its use in the decorative arts dates as far back as the Bronze Age. During this era niello was used to make inscriptions on hieroglyphs in Syria c.1800 BC.  Niello is remarkably durable, as is sterling silver and so accessories comprising these materials often require no maintenance at all.

Siam & Arabian nielloware is generally less intricate and some is even considered a little unfinished. For example Siam niello vanities will have the most basic interiors which would never have passed muster as a French, English or European piece. Nevertheless they have a charm of their own.

Arabian decorations usually depict rural scenes, highly stylized patterns or animals, rather than the human form. However, some nielloware made for the 1940s Allied Servicemen stationed in Arabian during WWII show humans astride camels.

Nielloware has a huge following. The history of this genre is particularly interesting as Siam niello tells a story of an epic adventure, The Ramayana. The Thai version is called The Ramakien.This epic is popular throughout India, Siam (now Thailand) & neighbouring countries too. HANUMAN ON HIS CHARIOT

Scene from the Ramakien in Wat Phra Kaew Bangkok 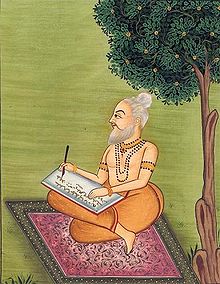 The author of The Ramayana (aka: Ramakien)

This is a fascinating story - The Uttara Kanda tells the story of Valmiki’s life as a highway robber called Ratnakar who killed & robbed his victims. Ratnakar tried to rob the sage Narada & the sage asked him ‘Will your family bear the sin of this robbery too?’ Ratnakar replied ‘Yes’, but the wise sage said ‘You must go & ask them’.

This he did & none of his family wanted to share this sin . The robber finally understood all he should about life & asked for Narada’s forgiveness. Ratnakar was taught the mantra for salvation but salvation was not given to murderers. Narada’s solution was to chant ‘Mara’ which is an anagram of ‘Rama’. The robber meditated for so long that ant-hills grew around where he sat. Only after many years of meditation did he hear a divine voice announcing his penance was successful. With his new found self he was re-named Valmiki - one born out of ant-hills. Valmikam is Sanskrit for ant-hill.

The Ramayana is composed of approximately 480,000 words. It tells the story of Prince Rama of Ayodhya whose wife Sita is abducted by the demon-king Raksasa of Lanka, Ravana. This poem plays an important role within Hindu literature, as it depicts the duties of relationships by describing ideal relationships which one should aspire to, as well as the concept of karma. 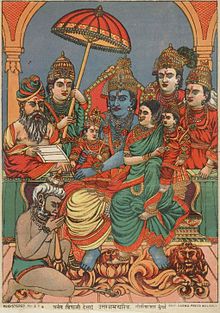 PRINCE RAMA OF AYODHYA WITH SITA TO HIS LEFT

Lord Rama, (Prince Rama) – is a major Hindu god who is central to the Ramayana epic. Almost always he is depicted with a bow and arrow. 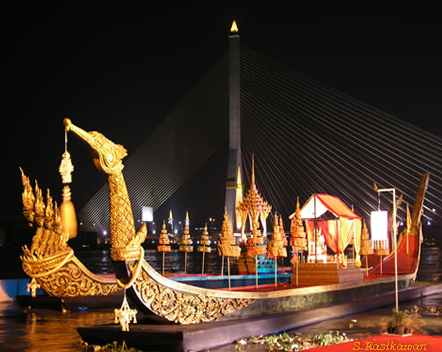 Suphanahongse, The Royal Barges. These are a collection of ornate boats now housed in the Royal Barge National Museum on Bangkok Noi Canal.

Thailand's Royal Barge Procession is a royal ceremony with religious  significance. It has been taking place for almost seven centuries. 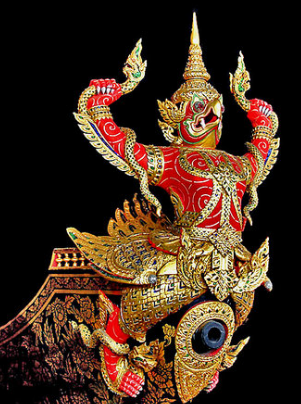 The Royal Barges are adorned with superbly handcrafted decorations. They combine craftsmanship and traditional Thai art. The Royal Barge Procession is a rare occasion and would occur during moments of cultural and religious importance.The Procession, in the present day, would consist of fifty two barges. Fifty one barges and also the Narai Song Suban (The Royal Barge) built in 1994 during King Bhumibol’s reign.

Phra Samut Chedi ( Phra Chedi Klang Nam). This is the world famous temple pagoda building in Thailand which appears to be floating on water.  It is located in the Phra Samut Chedi District. 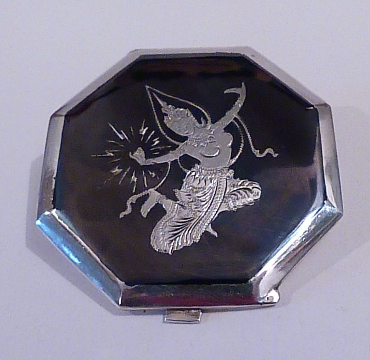 Mekkala(h), is the Goddess of Lightning. She is shown with lightning bolts coming from her hand.

She is a well known figure in Thai literature.

Nang Fa, the Fairy of Happiness – looks like she’s dropping stardust from her hand to the floor.

She is spreading her happiness. 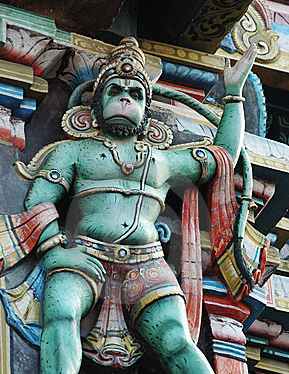 Hanuman, King of Monkeys, who is a Hindu God. Hanuman was sent by Prince Rama to build a bridge over Queen Matcha’s Sea Kingdom, but the Monkey King falls in love and seduces her instead. 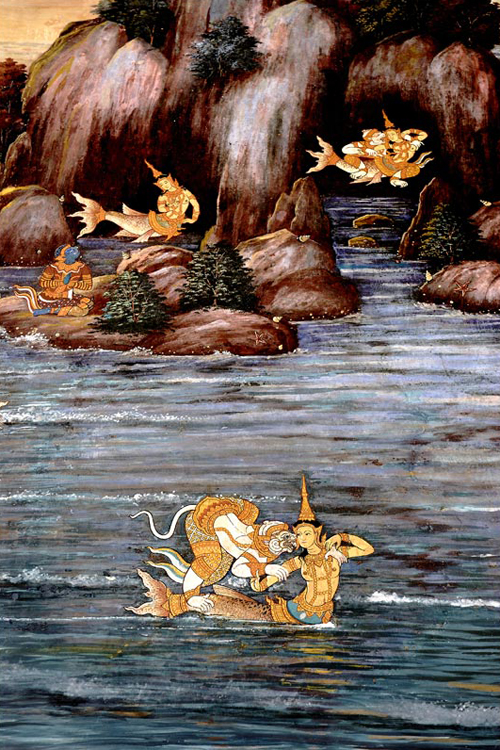 A MURAL OF SUVANNAMACCHA & HANUMAN

Matcha (Suvannamaccha) -is  the Mermaid Queen.

Thepanom, a Thai Guardian Angel deity who sits praying with a flame like motif appearing from behind the head. 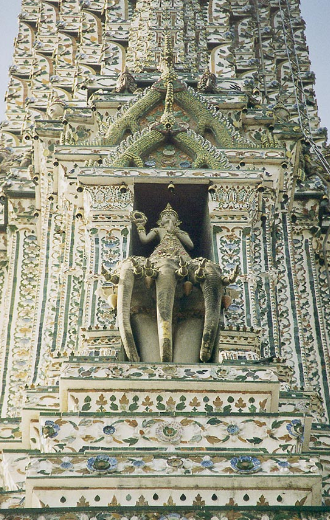 The image above shows a section of the Phra Prang, the central tower of the Wat Arun ("Temple of Dawn") in Bangkok, Thailand showing Indra on his three-headed elephant Erawan (Airavata)

Erawan (aka Airavata) is the three headed elephant who is king of the elephants. He is often shown with Indra on his back.

Indra is the God of rain and thunderstorms. 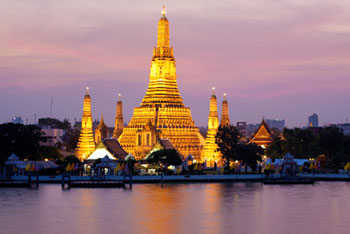 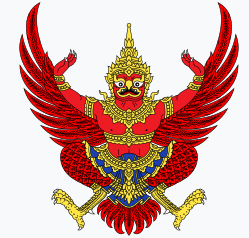 Both Hindu and Buddhist cultures feature Garuda in their myths. This creature is the emblem of the King of Thailand. This image was officially adopted in 1911 and replaced the Siam coat of arms. 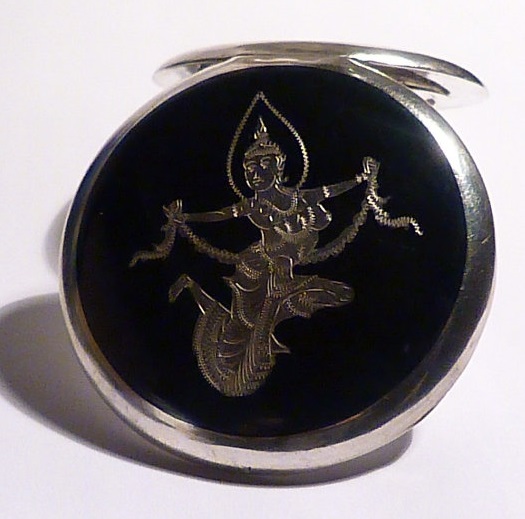 Dancing Angel –is  depicted with a long curved garland (looks like rope) held behind her back.

Sword dancer – we often see a  figure holding up two swords on Siam nielloware. Using a sword in both hands is a method commonly used in some Thai martial arts and in many traditional dances. 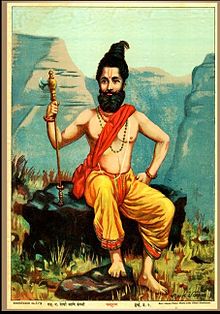 Often Siam nielloware features both Mekkalah the Goddess of Lightning & also intricate images of Parshuram - who is one of the seven immortals or Chiranjivi, of Hinduism. He received an axe as a reward after undertaking a terrible penance to please Shiva. Shiva then taught him the martial arts. Parshuram was a great hero who rid the world of kshatriyas twenty-one times over. His revenge for King Kartavirya killing his father.