The History Of Boots The Chemist & Boots Makeup Compacts

The magnificent building above is the premises of Messrs. Boots' Central  Branch sited at the corner of Pelham Street & High Street, Nottingham.

This impressive building befitting ‘the largest pharmacy in the world’ has terra-cotta facades that were crafted in the style of the Spanish Renaissance.

John Boot (1815 – 1860) was the founder of Boots The Chemist. He was born in Radcliffe on Trent and studied at Tiffin School in Kingston. He became a farm worker but his poor health did not give him the great strength and resilience needed for this type of employment. He moved to Hockley Village. Unable to afford doctors’ fees, his mother made herbal remedies for him.

She taught him how to make remedies too.

John married Mary Wills and they had two children Jesse and Jane. John died in 1860.

On his death Mary continued the business they had founded - M & J Boot Herbalists.

Jesse was trained by his parents to prepare herbal remedies. This training led to him following the same career path. 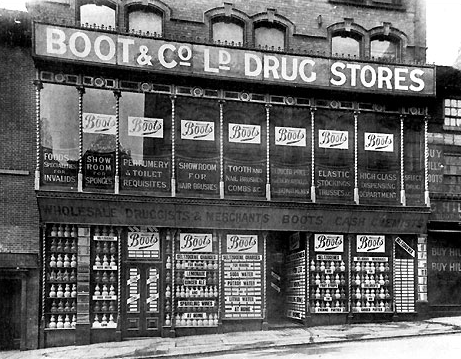 In the late Victorian era Jesse Boot opened his first shop which was located on Goose Gate in Nottingham.

This was the second shop owned by the Boots family.

As well as his own herbal cures Jesse Boots began to sell patent medicines at discounted prices. At this time poor patients would have been given credit for the expensive medicines that were sold. So as well as being ill they fell into debt. As you can imagine the Boot’s Patent Medicine Stores were a great success and they helped many people. Boot’s Patent Medicine Stores were renamed Boots & Co. Ltd. to reflect the status of the limited liability company.

In 1884 a change in the law allowed limited companies to dispense prescription medicines and sell poisons. Naturally, Jesse wanted to move into dispensing and so he engaged Edwin Waring to be the first pharmacist working for Boots.  Waring began work at the Goose Gate store.

Mary, worked alongside her son until her passing in 1885. As you would expect from someone who had such a mission to accomplish and so many patients needing help Jesse worked too hard and suffered a breakdown in 1886. He went for a much needed rest cure to the Channel Islands. There he met Florence Annie Rowe (1863-1952) possibly whilst browsing her in her father’s book shop in St Helier, Jersey.

After the couple married, Florence helped Jesse to develop his business which also included a library service. This service was manned by especially trained librarians who had passed examinations which focused on literature and librarianship. Two subscription types were offered. Class B which allowed members to borrow books which were over one year old. Class A was a premium on demand service.

The Boots Book-Lovers' Library was a circulating library which was established in 1898. The library closed in 1966 following the Public Libraries and Museums Act (1964) which required councils to provide free libraries.

Older readers may remember the Pelham Library books. Boots reprinted classic books and published them with the brand name Pelham Library. This name was a nod to the flagship Boots shop situated on Pelham Street. 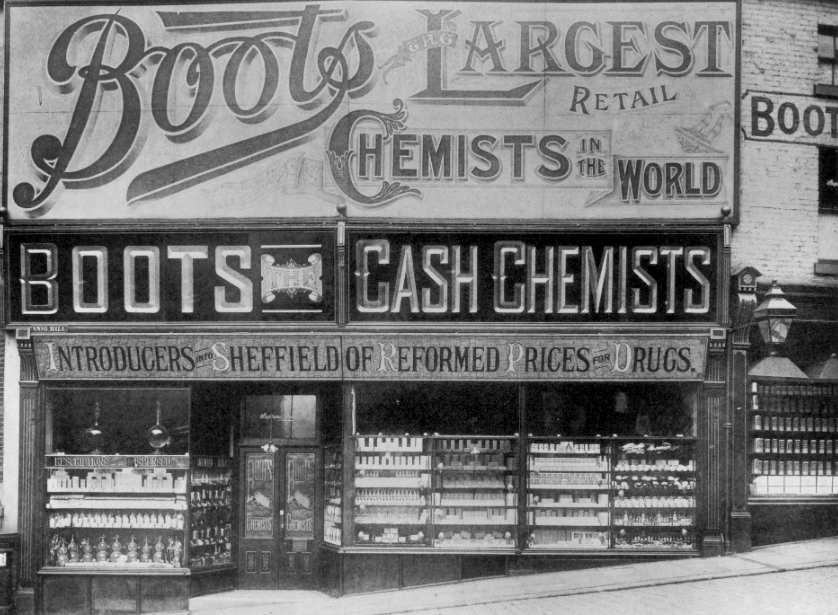 The firm had the tagline of Boots & Co The Largest Retail Chemist In The World.

In 1888 a private company was formed. Money was needed to finance the firm’s expansion.  The shops were now trading as Boot’s Cash Chemists, no doubt to distinguish them from the expensive pharmacies where patients would fall into debt. All of the Boots shops were managed by qualified chemists.

The largest branches of Boots had departments which now sold books, stationary, artists materials and toiletries / cosmetics. The expansion to toiletries began in 1896. 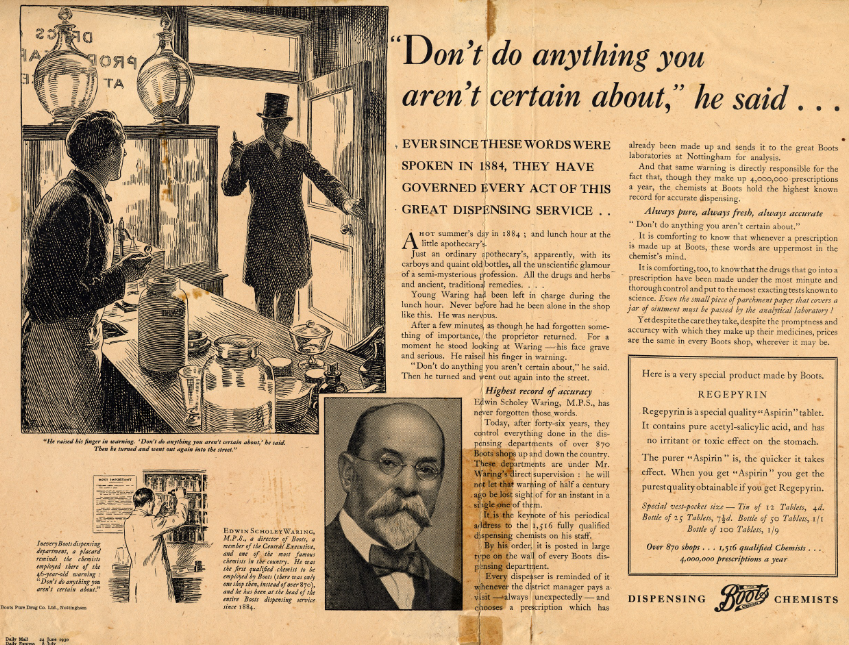 Waring decided to cut the cost of prescriptions by half and as you can imagine patients flocked to Boots pharmacies for their medicine. This decision caused much criticism from competitors who stated that these savings must have resulted from inferior quality medicines and that Jesse Boot was not a qualified pharmacist.

Waring ensured that training and medicines were of the highest quality. He had signs in each pharmacy hung in full view which read:

Accuracy in dispensing depends on the undivided attention of the dispenser.

He ensured all the dispensing staff carried out their duties to the highest possible standards. The painting was commissioned at the time of Jesse Boot's knighthood. 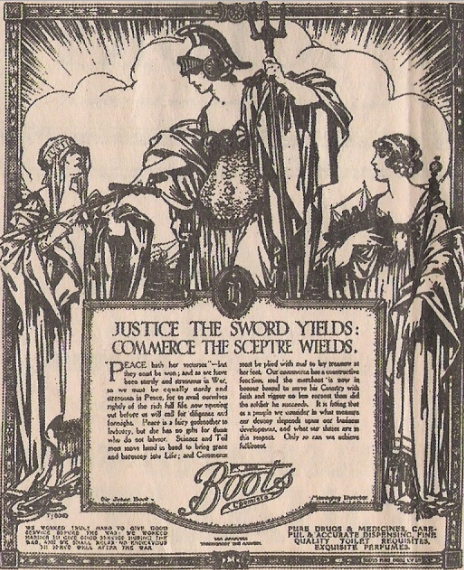 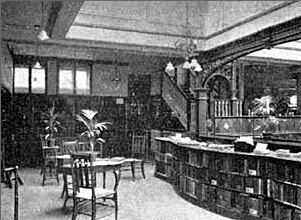 Florence Boot knew that education is the best way for people to escape poverty and caring for people in a comprehensive manner must include education. The Boots Book-Lovers' Library was founded in 1898 by Florence Boot and continued until 1966. Boots also reprinted classic books. Many people may have seen books printed by the Pelham Library, which was named after Pelham Street in Nottingham. These books were sold by Boots the Booksellers.

This subscription library was often located on the first floor of the premises.

By 1919 agents were placed by the company to capture the international market, including India.

Eventually this network of agents had expanded to encompass many overseas colonial territories.

In the 1920s Jesse sold his controlling interest to Louis K. Liggett, owner of the American United Drug Company. Jesse had chronic ill health and he wished to step back from running the business.

In 1932 Jesse died in Jersey. The Sir Jesse Boot Chair in Chemistry (Nottingham University) was named in his honour. Florence commissioned the superb French artist Rene Lalique to refit St Matthew's church (parish of Saint Lawrence, Jersey) as a memorial to her husband. The fabulous creations contained therein gained the church the sobriquet of the Glass Church. As well as the sale of books and medicines, the company stocked a wide variety of gifts. The 1930s advertisement above shows a vanity mirror, cased books, a table lamp with a mounted alarm clock, a dressing table vanity set, a wicker sewing basket and an ornamental nude. In 1938 some of the perfumes offered for sale were English made and exclusive to Boots. The festive advertisement above features two of them - Jasmin and Real Devonshire Violets.

Bringing the true fragrance of the enchanted gardens of the West,

these exquisite perfumes are ideal Christmas gifts. Nothing could

be more tasteful, nothing is more certain of appreciation. The

gracious offering. Perfume from Boots the Chemist is a gift that

One of the most popular of all English perfumes - delicate

and elusive, yet lasting.

This is more than a Violet perfume. It is THE Violet

Perfume in which all the exquisite delicacy of fresh

PRODUCTS OF BOOTS THE CHEMIST In the 1940s the line we now know as No.7 was called Number Seven.  The lovely advertisement above is like a pastel watercolour. In the background a cricket match is taking place. An elegant lady and a gentleman in morning dress are shown in the foreground.

The MODERN way to Loveliness

Obtainable only from branches of

In the 1950s the Boots brand became as famous for make-up as it was for medicine. The No.7 range is still particularly profitable for the firm. 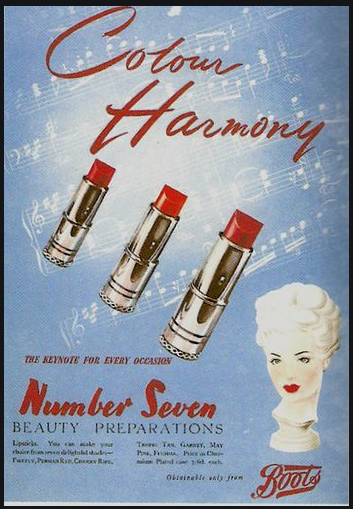 This lipstick was marketed with the tagline -

﻿THE KEYNOTE FOR EVERY OCCASION 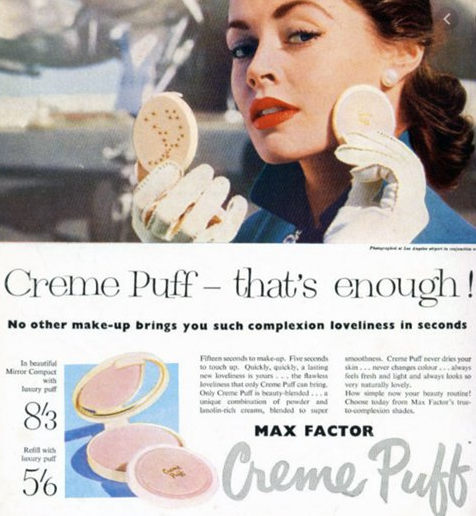 Boots stores have sold Max Factor foundations for many decades.

The Max Factor Creme Puff range still has the same size of powder pan that it did in 1953 and so it fits many vintage powder compacts, including the Boots brand.

Many of our vintage powder compacts are suitable for Max Factor Creme Puff.

By the 1960s the Boots brand had a worldwide following. The success of the company enabled it to buy out the dispensing chemist chain Timothy Whites & Taylor.

Boots was not a manufacturer of compact mirrors. The firm commissioned A.S. Brown & Co. Manufacturing Ltd. to make compact mirrors for them. This maker owned the Mascot brand. Vanity sets which include perfume atomizers were sold in Boots stores in Boots branded gift sets.

The model which was most usually seen in Boots stores in this era is one that is also known as a Mascot brand compact. There are many lid decorations. Originally these compacts were convertible, which means they were suitable for both loose and pressed face powder. If they are complete with the original sifter gauze they can still be used with loose face powder. Without the sifter they are ideal for pressed face powder such as Rimmel Stay Matte, Rimmel Natural Bronzer, Max Factor Creme Puff, CCUK and Miss Beauty. We often used to wonder who made Boots branded compact mirrors and the set shown above helped us to solve the mystery for us. The set is Mascot branded and exactly the same style as Boots branded sets. Even the instruction leaflets are the same except for the brand name printed at the bottom of the leaflets. More information about the Mascot brand. An attractive Boots brand 1960s compact which is suitable for use with Rimmel Stay Matte, Max Factor Creme Puff, CCUK and all pans of pressed face powder measuring 67 mm diameter. This handbag mirror was made by the owners of the Mascot brand, A.S. Brown for Boots The Chemists. 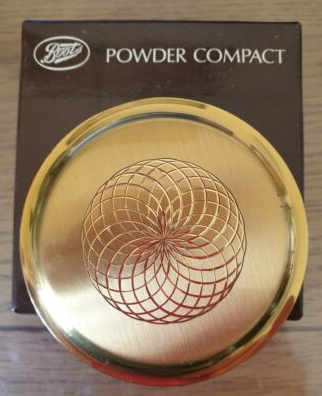 BOOTS COMPACT IN THE ORIGINAL BOX

In the 21st century Boots is known as Boots Alliance and it is no longer a British firm.

Stefano Pessina (born June 4 1941) took over his family's pharmaceutical wholesaler in 1977. The company became known as Alliance Santé. In 1997, it merged with Alliance UniChem. From 2001 to 2004, he served as its CEO. He served as deputy chairman, and later as chairman. The company merged with Boots Group PLC in 2006 and was taken private in July 2007, when Boots Alliance was purchased by Kohlberg Kravis Roberts and Stefano Pessina, who moved the headquarters to Switzerland. This was the first time a FTSE 100 company had been bought by a private equity firm.

In 2009 the opticians Dollond & Aitchison were absorbed into the company.

Stefano Pessina resides in Monaco. He became chief executive of Walgreens Boots Alliance in 2015 after the merger of Boots Alliance and Walgreens. During his tenure the group halved in value.

In 2020 Pessina decided he would take on the less time consuming role of executive chairman once a new chief executive was engaged.

The Chemist And Druggist