This manufacturing firm of silversmiths is said to have been established in 1879.

The company was incorporated in 1906 joining the firms of McKewan & Adie (manufacturing jewellers, gold and silversmiths) and Edward Souter Barnsley (box and case makers).

In this year the directors were listed as Percy James Adie, Hubert William Adie and James Percy Alderson.

Their Birmingham manufacturing premises were listed as 45 Frederick Street and 1 Northampton Street.

On October 20 1915 Andrew Vaughan Jones is listed as the inventor of the Adie Bros manicure pad.

This invention is for a collapsible handle which is located on top of a vanity brush or manicure pad. This was to enable the brushes or buffers to be stored more securely in vanity cases, as then the lid could close tightly on top of the item without leaving a space which would allow the buffer etc to move about during transit.

The patent drawings below show this device on a nail buffer.

At this time the soft material used to buff nails was often kid skin.

Fig. 1 shows the handle in an elevated position.

Fig. 4 gives an example of how neatly the handle fits into the buffer when retracted. 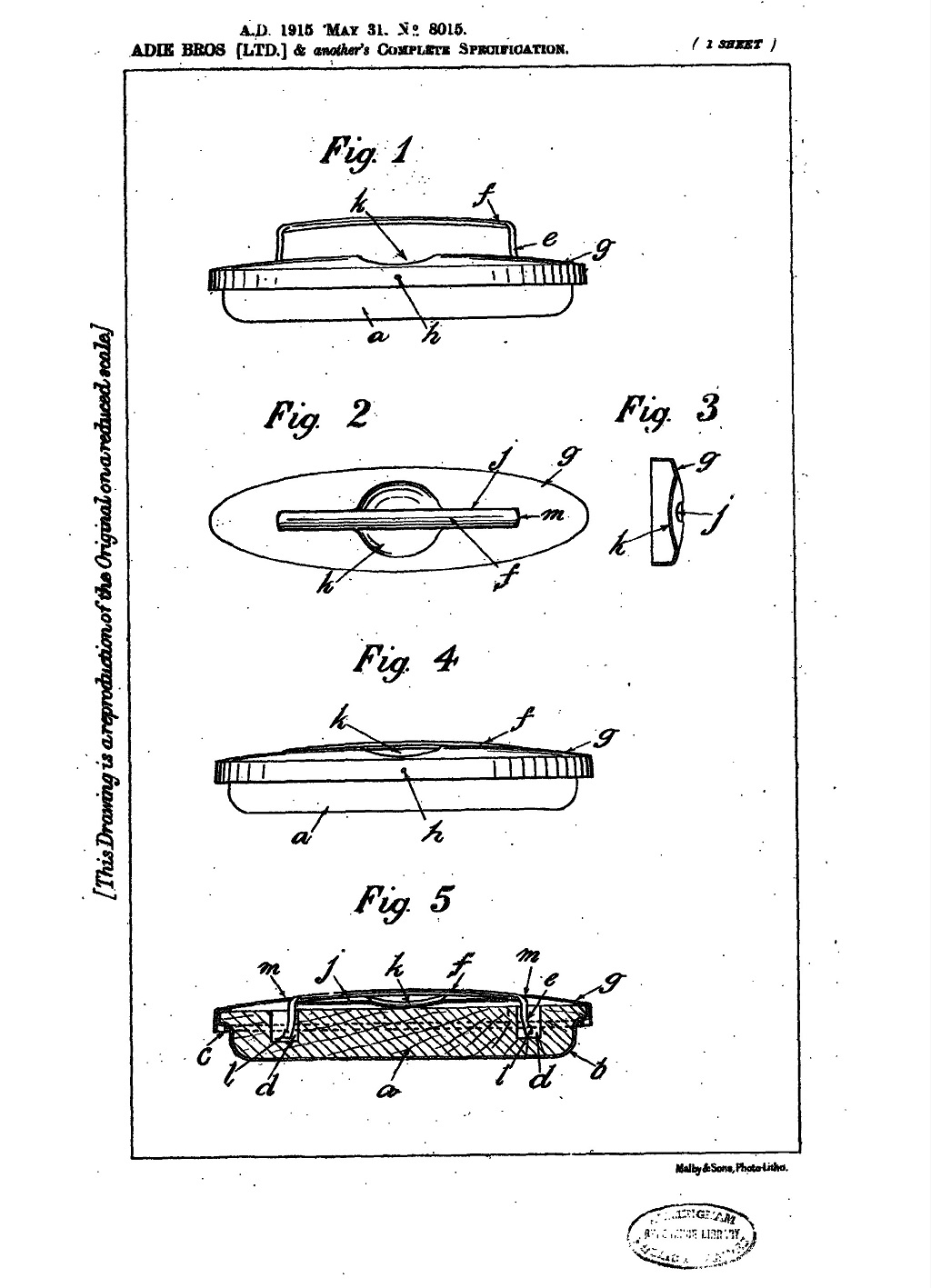 DRAWINGS FOR ADIE BROS. PATENT 191508015
On January 6 1916 the patent was published. A descriptive summary is shown below.
Improvements in and relating to Manicure and other Pads and
Brushes.
We, ADIE BROTHERS Limited, of 1, Northampton Street, Birmingham, Manufacturers, and ANDREW VAUGHAN JONES, of the same address, Manufacturer, do hereby declare the nature of this invention to be as follows:-
This invention comprises improvements in and relating to manicure and other pads and brushes, and refers more particularly to pads and brushes intended when not in use to be enclosed in cases, bags or boxes.
The object of our invention is to provide such article with a handle which may be drawn up into a convenient position for use, when desired, and when the article is not required for use may be pressed down to be substantially flush with the top or back of the pad, brush or the like.
﻿1919
﻿Adie Bros. purchased the manufacturing jeweller and electro-plater Horace Woodward & Co. Ltd. of Atlas Works, Paradise Street, Birmingham.
Gold and silver cigarette cases and electroplate cigar boxes were made at the Atlas Works.
As well as their presence in Birmingham, the company had London addresses which were located at 8 & 9 Stephens Buildings, Gresse Street, Rathbone Place where manufacturing took place and their elegant showrooms were sited at 38 Holborn Viaduct. The large windows are typical for a premises where the manufacturing of jewellery is the primary purpose.

A good source of natural light is essential. The silversmiths and enamellers would have benches located right next to the windows.

Adie Bros crafted their tableware at the Frederick Street manufactory.

Fabulous vanities and high quality ﻿fancy goods﻿ were made at their Northampton Street premises.

Their work is of the highest standard and consequently the enamel finishes are remarkably durable and will last many lifetimes.

The company endeavoured to find production methods which would ensure the soundest and most hard-wearing finishes and manufacturing processes.

On January 12 1922 Frederick Charles Hall applied to have his patent registered on behalf of Adie Brothers Limited.

The description below goes into detail about the difficulties which can be experienced when plunging enamel into the gilding vat and how the firm avoids the enamel from being damaged. 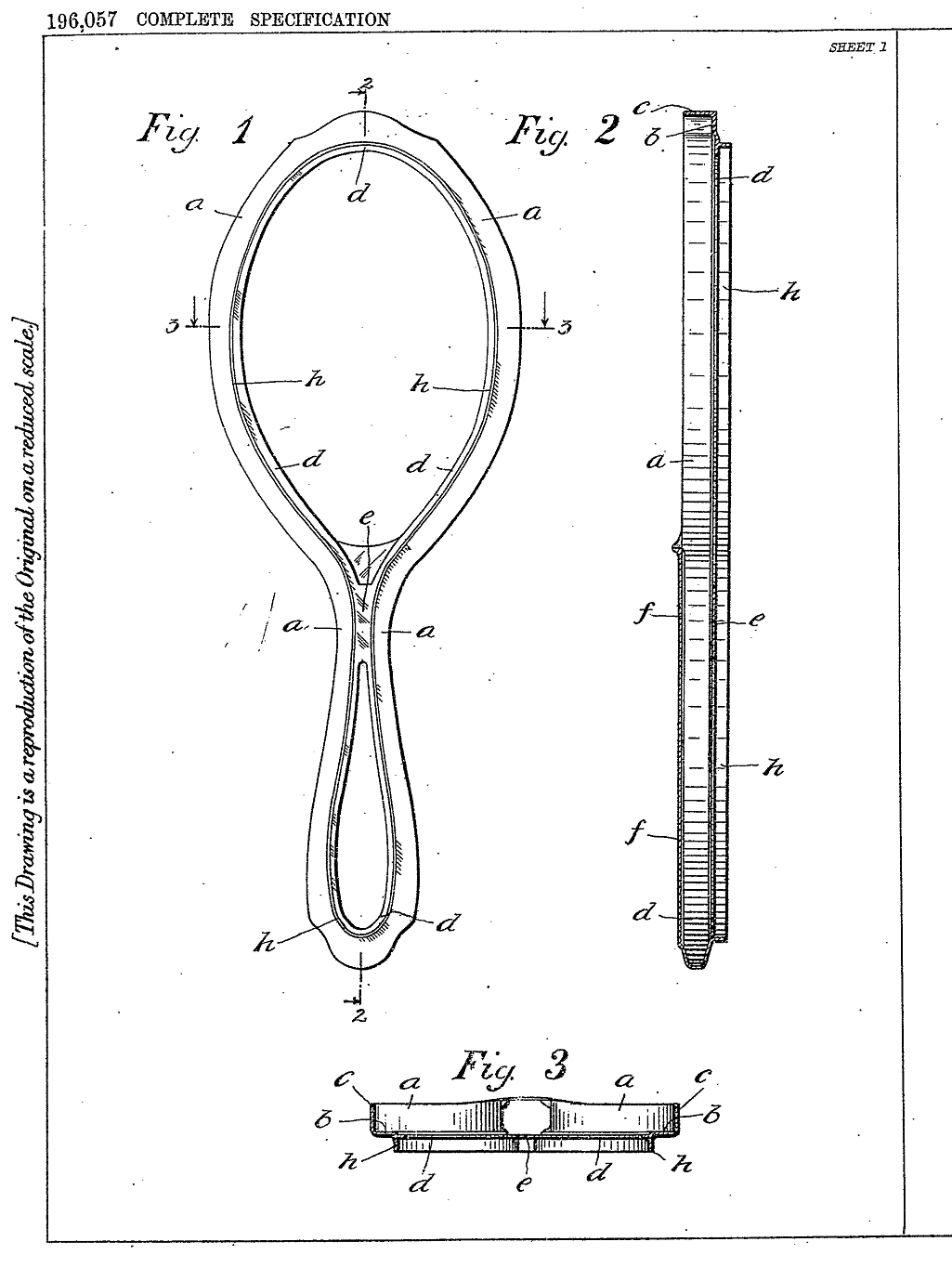 Improvements in and relating to Ornamental Brushes, Hand-mirrors, and like Articles.
We, ADIE BROTHERS LIMITED, a company organised under the laws of England, of 1, Northampton Street, Birmingham, and FREDERICK CHARLES HALL, British subject, of the same address, do hereby declare the nature of this invention as follows:- This invention has reference to improvements in and relating to ornamental brushes, handmirrors, and like articles, more particularly those in which a bristle carrier or a mirror is secured within or to a back suitably enamelled.
In this type of brush hitherto made, the back comprises a one piece member which is suitably decorated, and subsequently stove-enamelled. This construction offers disadvantages in that the metal forming the back of the brush has to be of heavy gauge to resist buckling during stove enamelling, and- then the pulling over onto the bristle carrier is liable to damage the enamel. Moreover, the usual solder employed will not stand heat, and a special solder has to be used. Further, these enamel goods are usually sold in gilt finish, and in the gilding operation, .the enamel on the back of these one-piece members has to go into the gilding vat, and this very frequently causes the enamel to fly off.

With our improvements the outer frame only has to be gilt, and the enamel does not come into the vat at all. 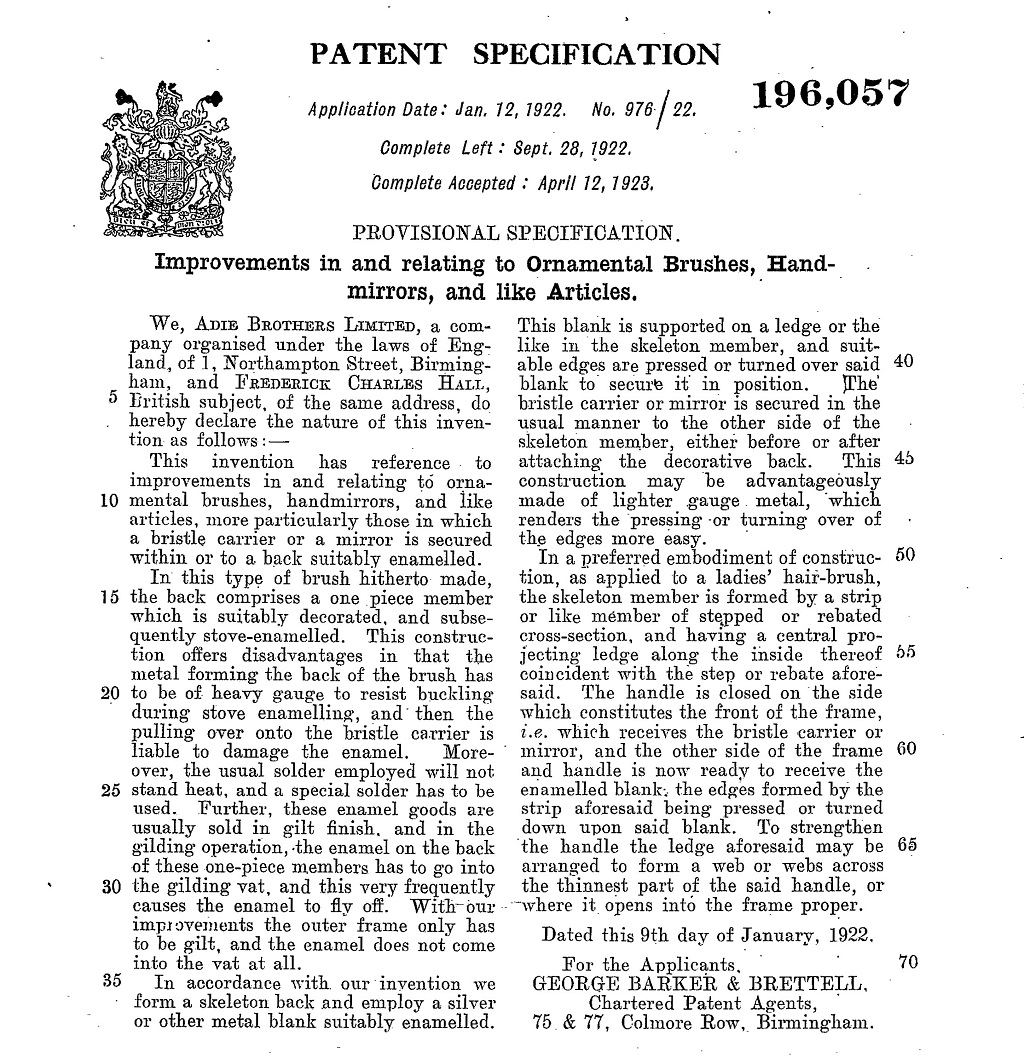 On March 19 1922 Andrew Vaughan Jones lodged an application on behalf of Adie Bros. for Improvements in Nail Polishing and like Pads.

His invention was for a neater construction and more durable manicure pad. 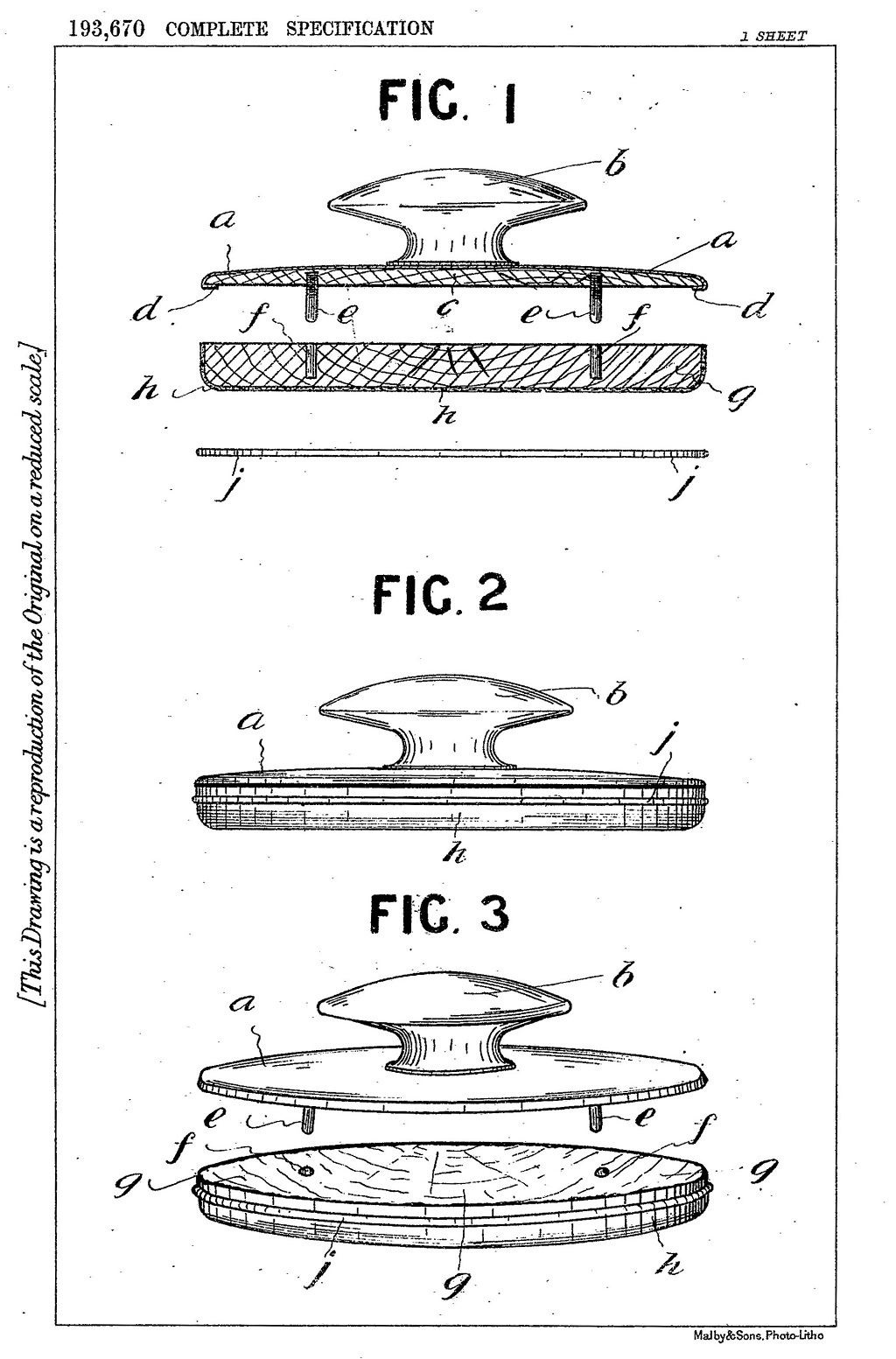 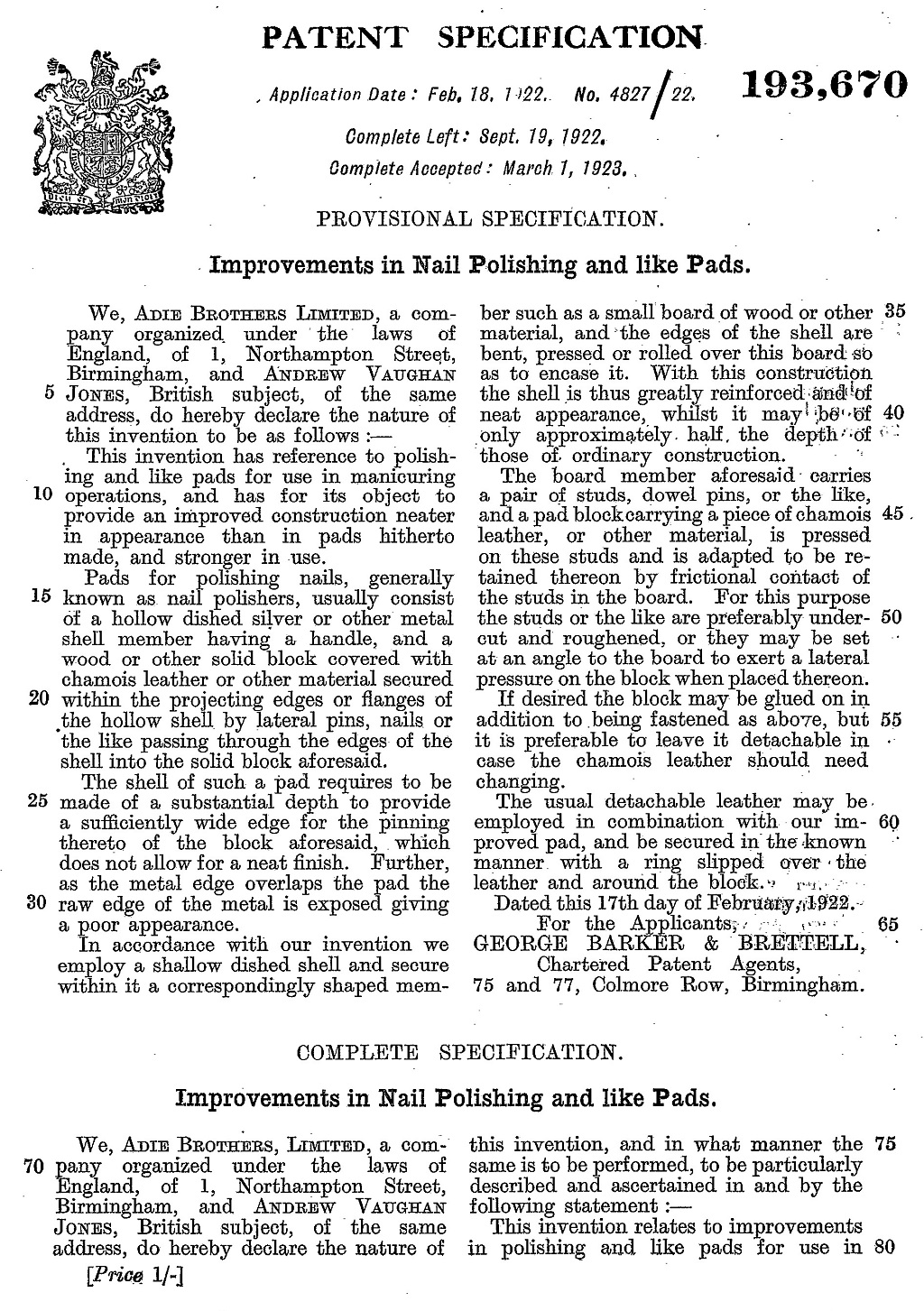 ﻿A patent for the invention of a ﻿Metal Spinning Tool ﻿was published on January 27 1927. The inventor is listed as﻿ James Percy Alderson of 109 Northwood Street, Birmingham, on behalf of Adie Bros.

From time to time this maker found that amateurs would attempt to repair one of their timepieces and then the watch would be reassembled in a less than satisfactory manner.

Adie Bros. saw this as damaging for their reputation and so a solution was sought. 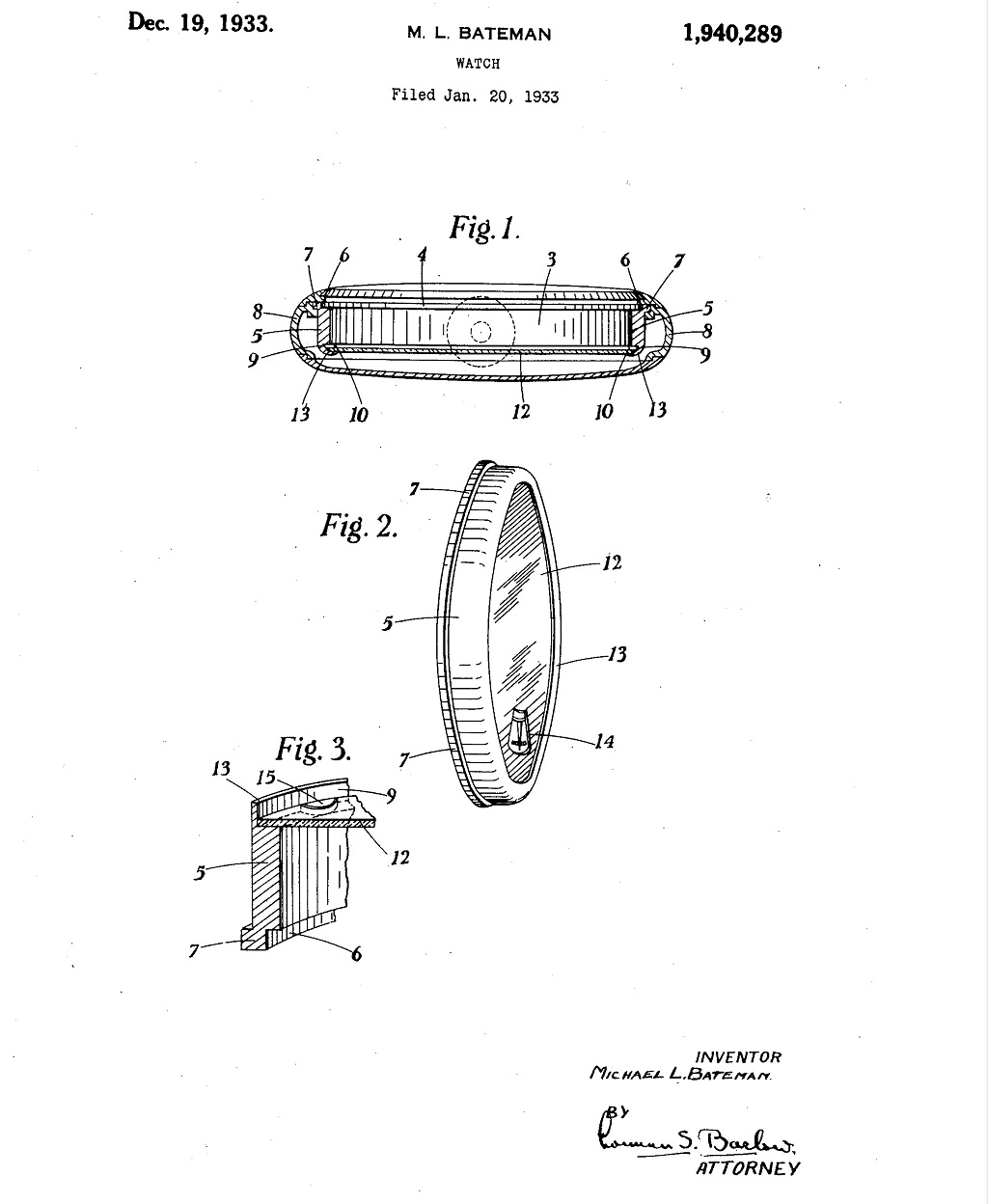 In 1933 Michael Laurence Bateman of Harrow, England, assignor to Adie Brothers Limited, made an application for a US patent (1940289).

His invention was a method of sealing watches so that they could not be tampered with.

His claims below describe the invention.

This invention comprises improvements connected with watches, and has for its object to provide an arrangement whereby the watch movement is sealed. It has been found that the repair of watch movements have often been undertaken by those who are unskilled in the art, with the result that the user is dissatisfied with the watch not knowing that it has been repaired in an unskilled manner. The present invention has been designed to overcome this defect in that the movement is issued sealed to the purchaser, who in order to obtain an efficient repair or replacement of the movement returns it sealed to the maker or his authorised agent, showing that the seal has been unbroken when the necessary repairs or replacement of the movement is effected. By this arrangement the maker will know whether the movement has been tampered with, whilst at the same time the user will be in a position to obtain a much more efficient service for the repair of the movement.

﻿The publication date of this US patent was December 19 1933.

A Swiss patent was also registered for this invention on March 31 1934.

The one shown below is fashioned in the style of the Art Deco sunrise. ﻿In June of this year the Northampton Street branch office and all the stock was destroyed when it was bombed by the Luftwaffe.

During WWII many of the factories in the Jewellery Quarter were given over to war work.

The paragraph below is the listing included for Adie Brothers Ltd. in the Directory of Manufacturers in Engineering & Allied Trades. It details the war work the firm undertook and the number of employees.

After the war manufacturing jewellers gradually began production of luxury goods again but there were acute shortages.

All the disruption and damage did not deter the most creative minds from improving their silverware and vanities.

Traditionally hand mirrors had a handle fitted on to them and secured by means of a nut, which may become loose or come undone. This design of hand mirror was not rigid or sound enough and so Anthony James Aide patented a hand mirror with a permanently fixed handle. 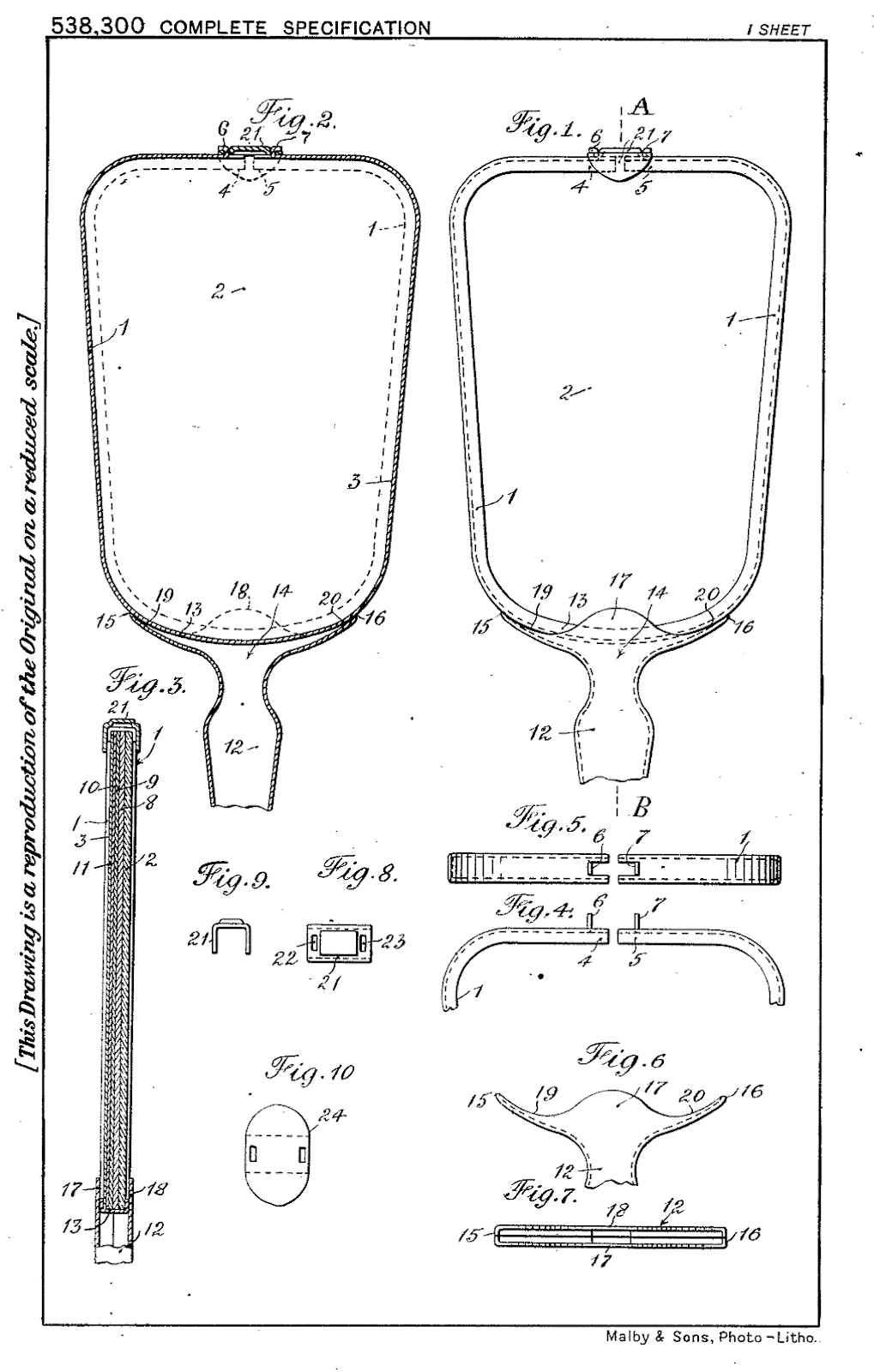 In the late 1960s the firm became part of British Silverware and closed in 1968.

British Silverware Ltd. had a strong track record in supplying the finest bespoke silverware to some of the world's largest super yachts.

The prestigious firm of Elkington & Co. was taken over by British Silverware, Ltd.

The original article written by Eleanor Bennett in 2017 was updated by Danielle Boyd in March 2022.

You can find out more on the history behind this iconic silversmith in our bespoke fact packs that come with every order - shop the collection.