Most of us have heard of Richard Woodman Burbidge (1872 - 1945) and seen some of the wonderful silver creations that bear his mark. We think that the image above captures Burbidge's strength of character. The photograph is courtesy of the National Portrait Gallery, London.

The Burbidge Baronetcy, of Littleton Park, Middlesex is a title in the Baronetage of England. The Baronetage was created on 25 January 1916 for Richard Burbidge. Richard Burbige was managing director of Harrods from 1890 to 1917. During his time managing Harrods shorter working hours were introduced for the staff and their benefits were increased. He was said to be a firm but fair boss. Richard Burbidge married Emily Woodman. Their eldest son, Richard Woodman Burbidge joined Harrods in 1893. He eventually became chairman of Harrods and the 2nd Baronet. On 2 September 1896 Richard married Catherine Grant.

Richard Woodman Burbidge’s name is synonymous with high quality silver and it is inextricably linked with the world’s leading luxury department store, Harrods, which is located on Brompton Road, Knightsbridge, London. At this time the Harrods silver workshops were located at Trevor Square. Richard Woodman Burbidge was also the president of the Incorporated Association of Retail Distributors. In 1919 Burbidge was awarded Commander, Order of the British Empire (C.B.E.) From this time he was known as Sir Woodman or Sir Richard.

Perhaps the easiest way to build up a picture of this extraordinary man is to discuss the Harrods-Selfridge Wager Prize. On January 4 1917 Richard Woodman Burbidge made a private wager with the owner of Selfridges, Harry Gordon Selfridge. In this extract taken from a letter written by Gordon Selfridge the terms are described…."Jan. 4th, 1917 Wagered Mr. Woodman Burbidge that within six (6) years after declaration of peace we would overtake and pass Harrods Ltd. in annual returns. The stake is to be a silver miniature replica of the loser's store. H. Gordon Selfridge."

Burbidge won the wager and he wrote to Selfridge to claim his prize. However, he quite sensibly requested that the prize be a replica of his own store, Harrods. Selfridge agreed but stipulated that the Harrods silversmiths should create the piece. At a cost of £400 the Harrods workshop created The Harrods-Selfridge Wager Prize - a silver cigar box in the form of a to scale architectural model of Harrods Department Store. Burbidge sent the invoice to Selfridges. It is said that this spectacular piece sat on Burbidge’s desk for many years and who would not want to gaze at this?  His son Sir Richard Grant Woodman Burbidge (1897-1966) also kept the model on display on his desk. He succeeded his father as managing director in 1935 and chairman in 1945. The model bears the mark of Richard Woodman Burbidge for Harrods, London assayed in 1927. The domed part of the roof opens to reveal a wood lined compartment for cigars. It is 24 inches wide, 21 ¼ inches long and 6 ⅞ inches high.

On 3 September 2014 The Harrods-Selfridge Wager Prize was put up for auction at Christie’s Out of The Ordinary sale which took place at South Kensington, London. The price of £86,500.00 was realised. 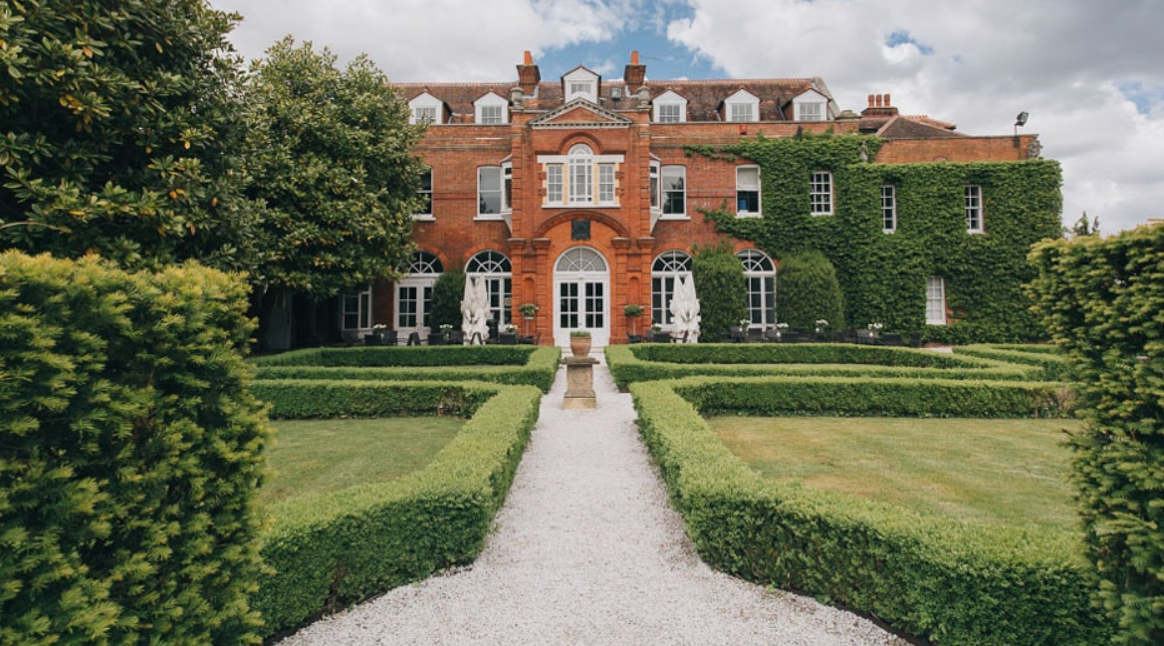 Littleton Park House was damaged by a fire that was so fierce it took more than a quarter of a century to restore to its former glory. Sir Richard Burbidge oversaw the restoration of his home. He sourced timber from the original Houses of Parliament for the reconstruction.

In 1931 Norman Loudon, owner of Flicker Productions, purchased Littleton Park House. The sixty acre site includes land at Shepperton. Mr Loudon had plans to turn the site into a film production venue as well as recording studios. Within a year films were produced for MGM. His production company was given the name 'Sound City Film Producing and Recording Studios'.

By 1934 the renovations began to convert the old house into a hotel and  restaurant. This rather wonderful Art Deco compact mirror was originally retailed from Harrods, London in the late Deco period (1939). It would have been extraordinarily expensive. It was made by Harrods silversmiths.

The compact is presented in the original signed blue leather fitted case and it is a unique find. The lid and base have linear engine turned designs and each outer edge features rose gold panels. This late Art Deco vanity is slimline, measuring slightly less than 6 mm thick. Its slenderness and design features capture the essence of the Art Deco era perfectly.