In 1855 Alexander Hudnut opened his first pharmacy in Brooklyn. His son, Richard, was also born in 1855 & so it was a busy time for the Hudnut family. The pharmacy was very successful, so much so that in 1870 Alexander moved to premises on the ground floor of the newly opened New York Herald Building, Broadway.

When Richard was eighteen years old he began working for his father. He spent seven years learning every aspect of this business. He & his father were eager to learn the secrets of the French perfume houses success. 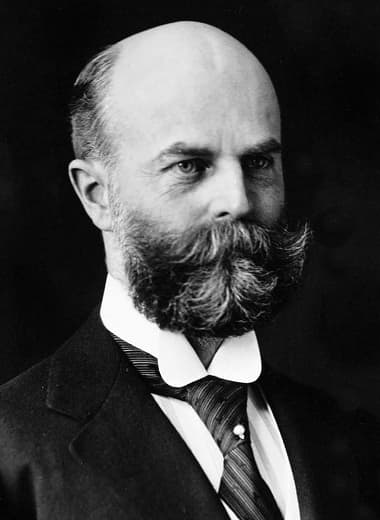 
French perfume and toiletries were and still are renowned throughout the world. American & English perfumers wished to replicate this success.  Alexander and Richard visited Europe to study how the Europeans, most particularly the French, conducted their business affairs and formulated their perfumes and toiletries.

By the age of 59 Alexander had decided to retire due to ill health. He sold Hudnut’s Pharmacy & another NY based store for a reported quarter of a million dollars. The stores kept the name as this ensured future custom. Although this was confusing as his son, Richard was still trading.

A third pharmacy on 925 Broadway was operated by Richard Hudnut.

Although Hudnut's Pharmacy and Richard Hudnut made efforts to distinguish each-other's products it was easy to associate both entities with each other. Often the two Hudnut brands can only be identified by the addresses on the advertisements and labels. In 1893 Richard Hudnut launched the Hudnutine’brand. This brand included tooth powder, face powder, rouge and cold cream. 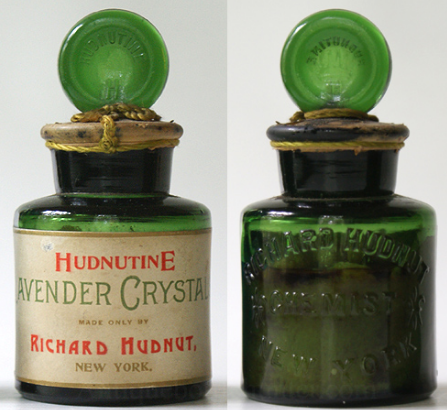 MADE ONLY BY RICHARD HUDNUT NEW YORK

The very appealing green glass served a purpose. The darker the glass the more protection it offers against oxidation. Amber (brown) glass offers the most protection. Oxidation breaks down and negates the therapeutic value of medicines and essential oils over time and so many pharmacies offer medicine in coloured glass bottles and jars.

While blue and green bottles do not afford as much protection as amber glass and are more expensive to manufacture they do attract more attention and therefore sales.

We think that you will agree that these adorable little green bottles are so beautiful.

The green glass protects the contents from visual light but not from UV rays.

The company produced many successful brands. 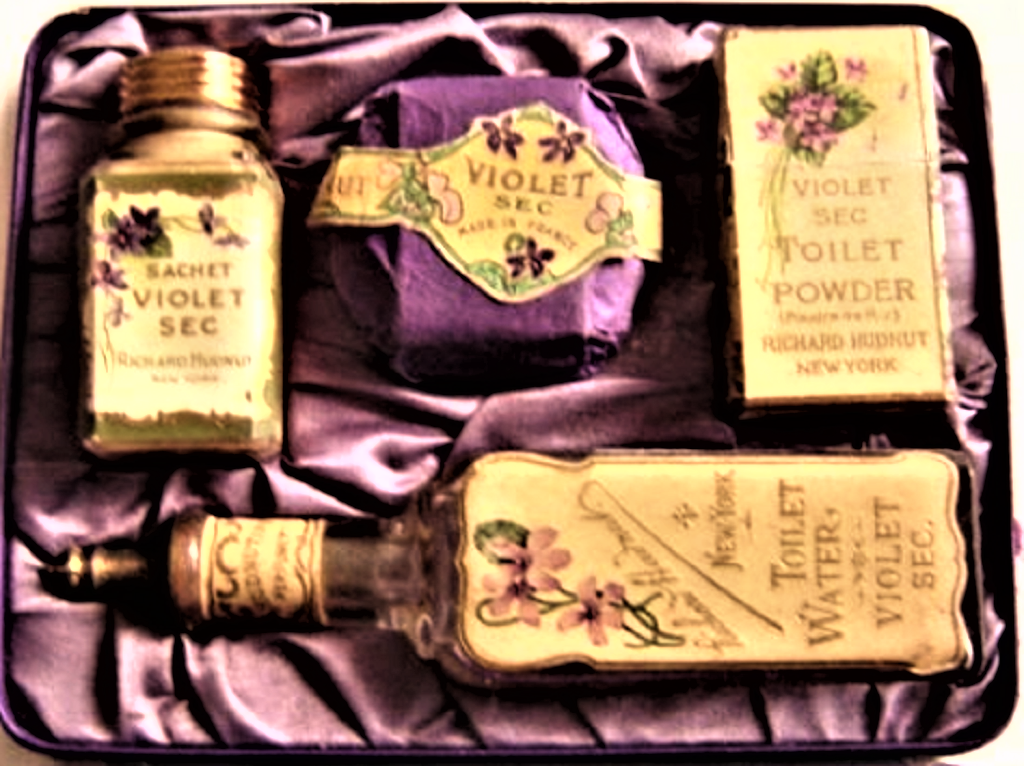 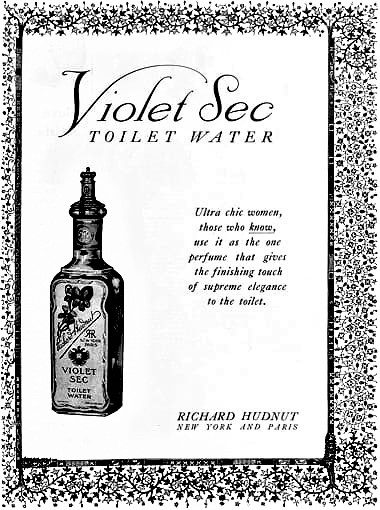 Violet Sec was promoted as a perfume for ultra chic women.

Violets have also been used throughout history in preparations for the treatment of dry skin, eczema and even to calm skin inflamed from insect bites. Until the middle of the twentieth century many villages had more herbalists than doctors and few people could afford to see a doctor. Herbalists made brews tailored to treat their customer’s illnesses.

Herbalists gathered wild violets which they brewed and sold as a blood cleanser and cough remedy.

The following information is provided for its historical interest.

We recommend seeking advice from a medical professional if you have any health issues.

The herbalist would pour cold water over the wild violet leaves, place the mixture in a cool area and let it soak all night. In the morning the mixture would be brought to a simmer for 15 minutes then the liquid would be strained to separate the leaves from the fluid. The leaves were saved to add to bathwater. Then honey was stirred into the mixture which was then warmed on a very low heat.

The herbalist took care not to let the brew get too hot, as this would destroy the benefits of raw honey. 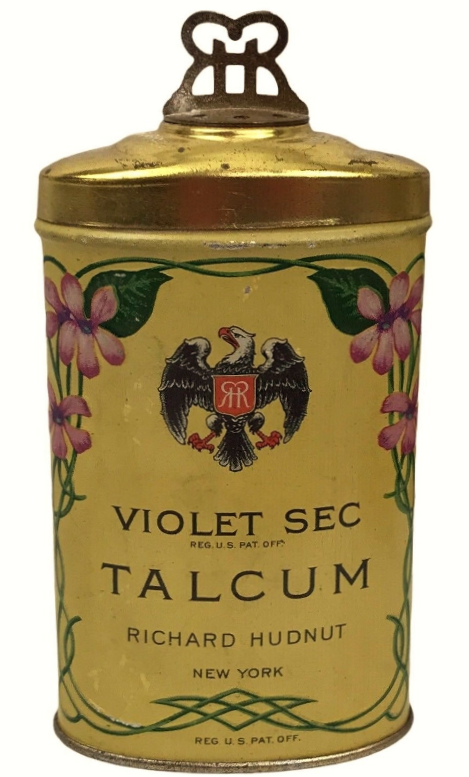 Henry Genet Dusenbury (1876-1939) was Richard Hudnut’s resident perfumer and company treasurer. He worked for the company for twenty-nine years until his retirement in 1938.

Here the inventor describes the device he would like to patent:

This invention relates to containers and more particularly to closures therefor. The invention seeks to provide a closure durable in structure, neat in appearance and convenient and reliable in operation.

In the accompanying drawings forming part of this specification, and in which like reference numerals designate corresponding parts, the invention is shown as applied to a container adapted to hold tooth powder, talcum powder, or other similar powdered or comminuted material. 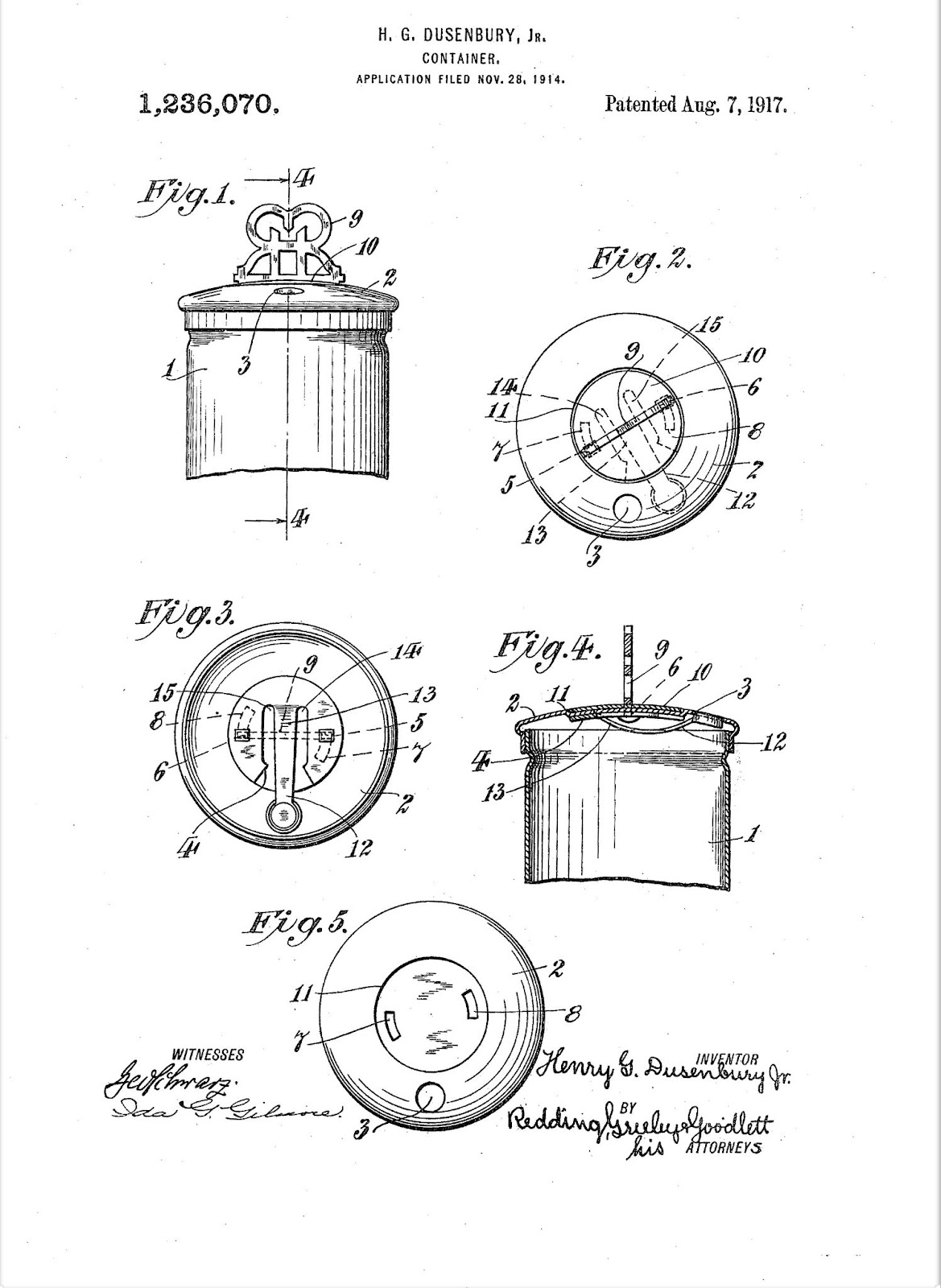 This delightful patent describes a turnkey in the shape of the Richard Hudnut logo. 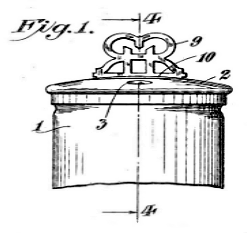 Figure 1 is a side elevation of a container embodying the invention.

1 is the body of the container, cylindrical in form, and having a circular, permanently fixed top 2 to which the closure is applied.

The top 2 is provided with an outlet opening 3 through which the contents of the container may be ejected.

On the under side of the top is fixed a rotatable valve member 4 designed to open and close the opening 3. 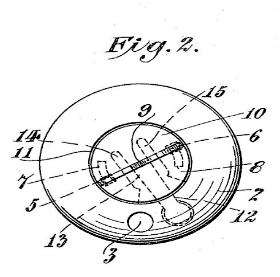 Fig. 2 is a plan view of the top thereof showing in dotted lines parts of the closure in open position which are secured on the under side of the top. 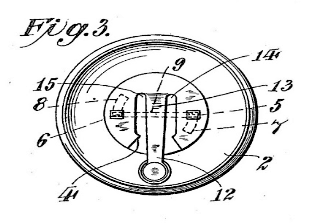 Fig 3 is a plan view of the under side of the top showing the closure in closed position.

Other popular brands include:


In 1900 Richard Hudnut launched the DuBarry line which was successful and long lived. The brand was subject to changes in the design of its packaging in 1929 which saw the presentation modernised to appeal to younger consumers.

It is no accident that the firm chose a French for this line of cosmetics. The kudos linked to French names enhanced sales for many American & English companies, whose customers desired French products above all others. The Du Barry cosmetic line was named after the famous beauty, Countess Jeanne duBarry, who was present at the court of King Louis XV. 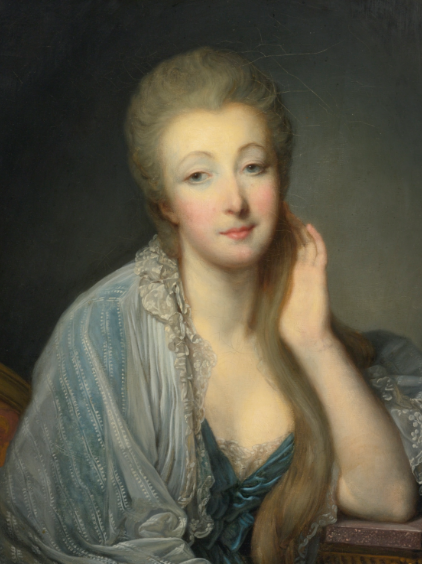 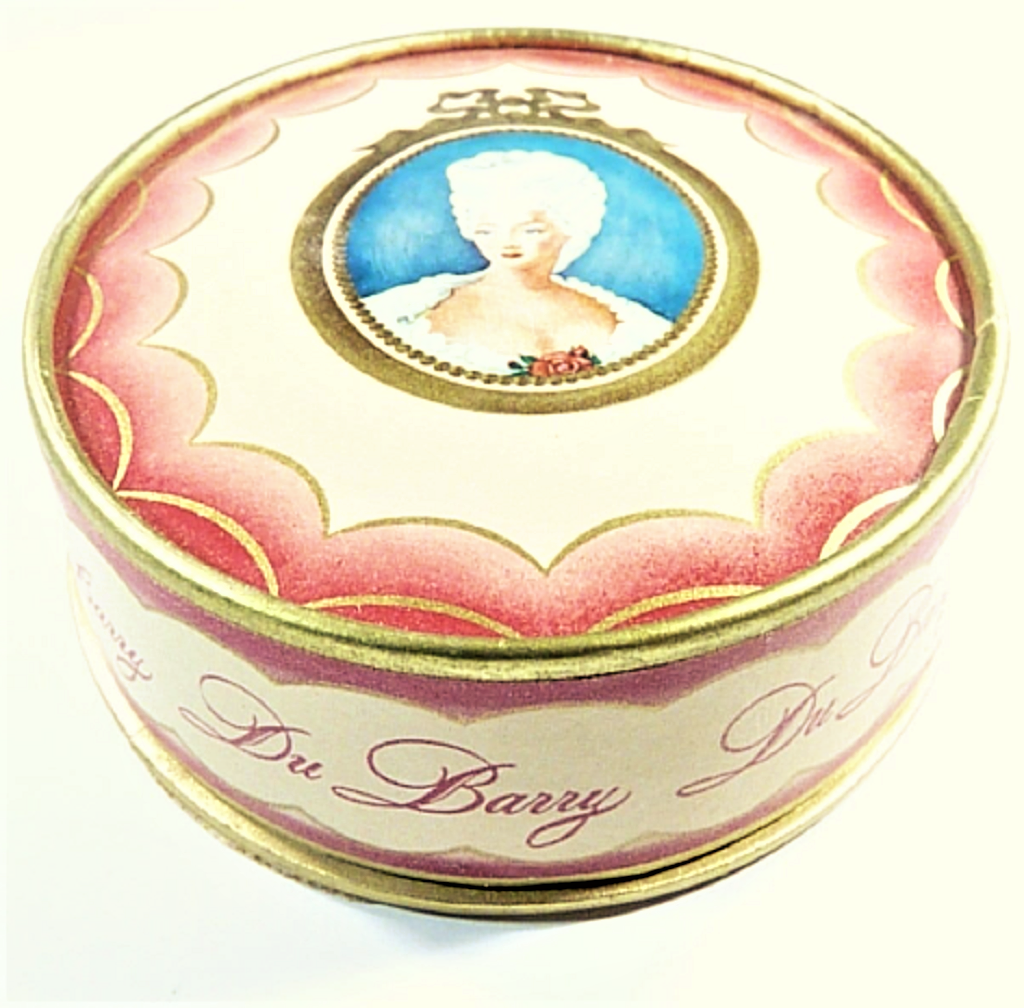 
Whether Richard Hudnut products are housed in glass, paper or cardboard, they are enchantingly beautiful.

The American depression affected the sales of all brands of cosmetics.

However, by 1936 there were new additions to the Du Barry line. 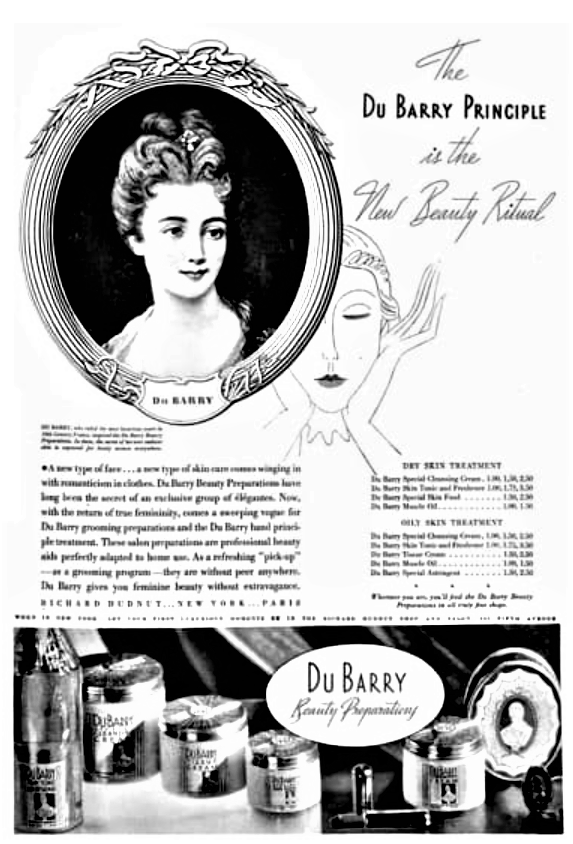 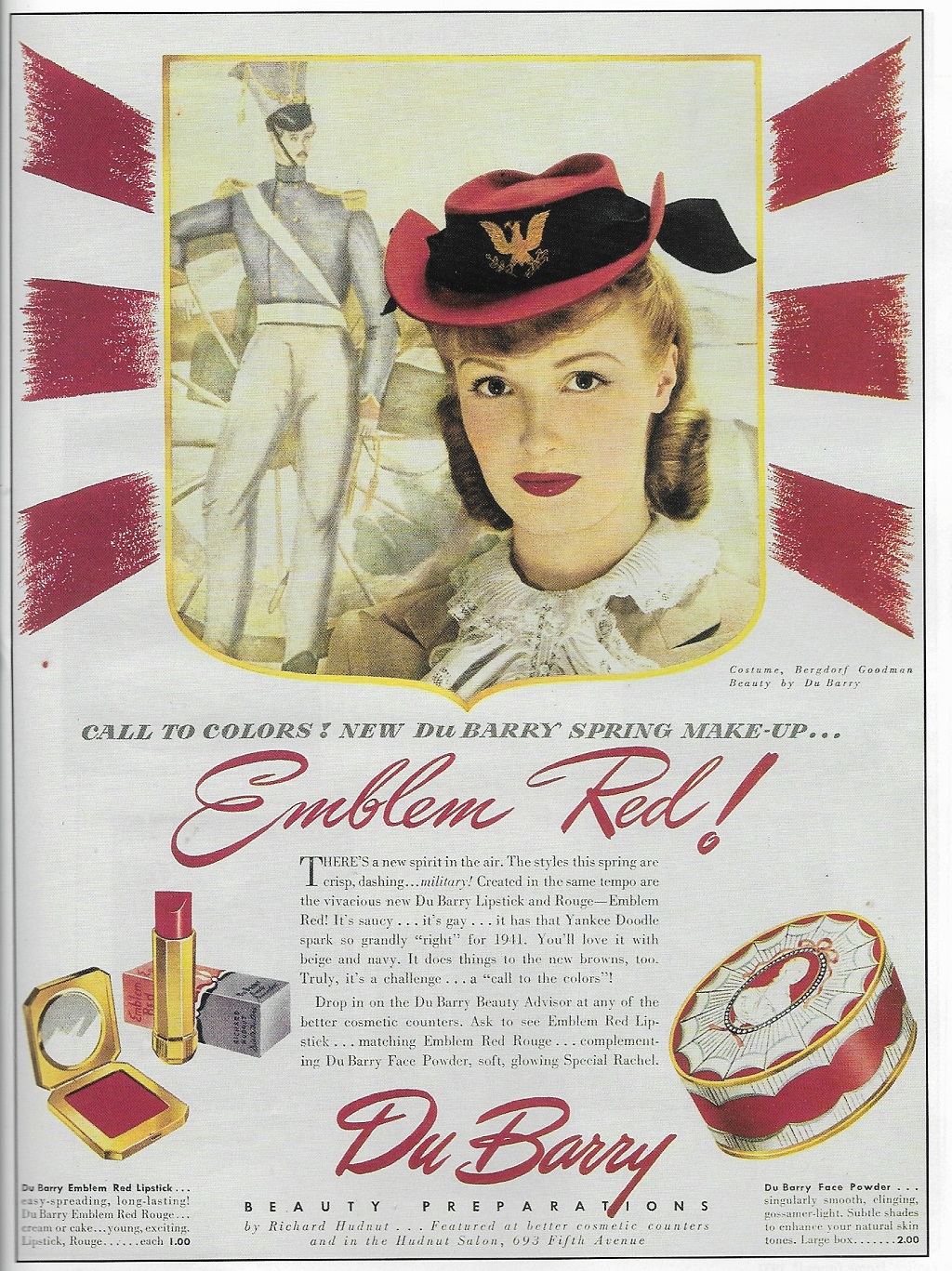 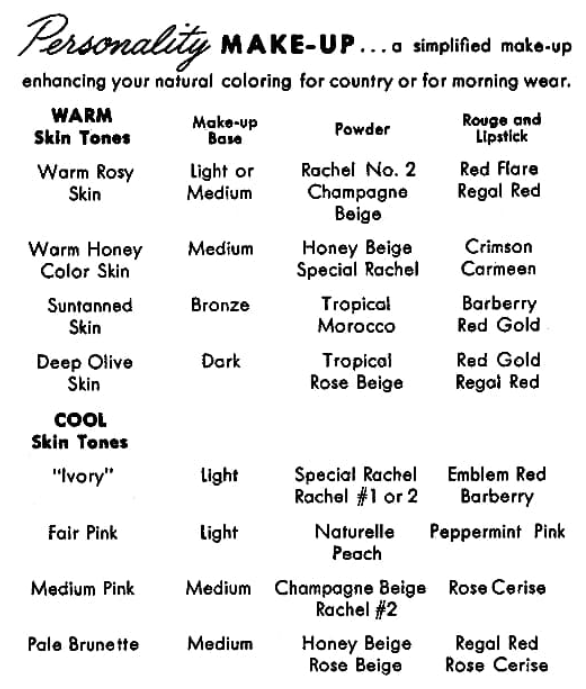 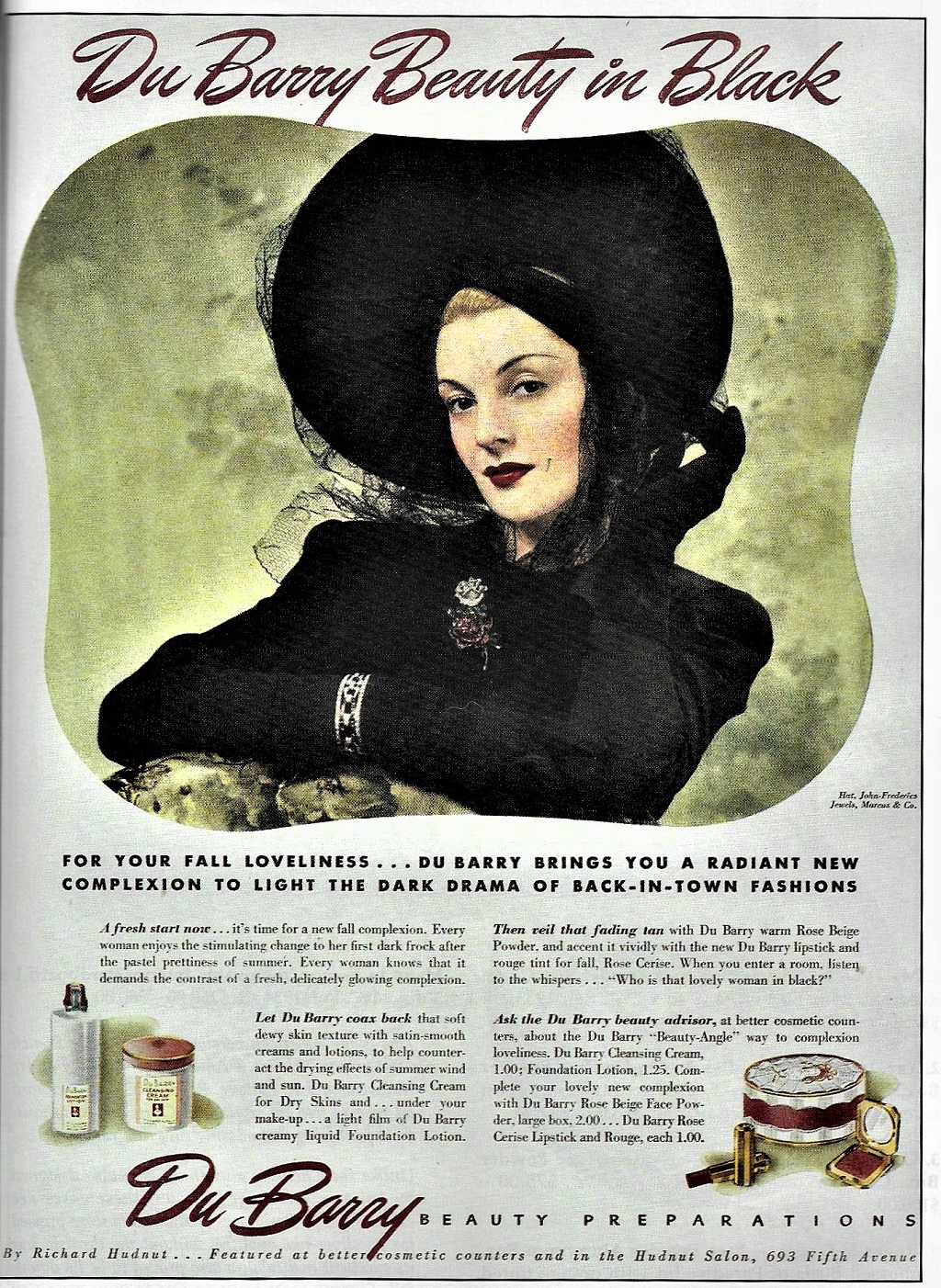 Two years after the launch of the Du Barry line the company introduced Marvelous Cold Cream. This was a historically important line as Richard Hudnut decided to market this cold cream in Paris. It is believed that he was the first American perfumer to sell cosmetics directly to the French market.

The company avoided competing with French perfumes which would have been a venture doomed to fail even though Richard Hudnut was much admired for his fragrances, cosmetics and also for the innovative containers used to hold their cosmetics.

Instead the firm concentrated on selling cosmetics, rather than perfume to the French market.

As we can see from the image of the Violet Sec vanity set Richard Hudnut cosmetics had a luxurious presentation which would appeal to even the most discerning ladies. 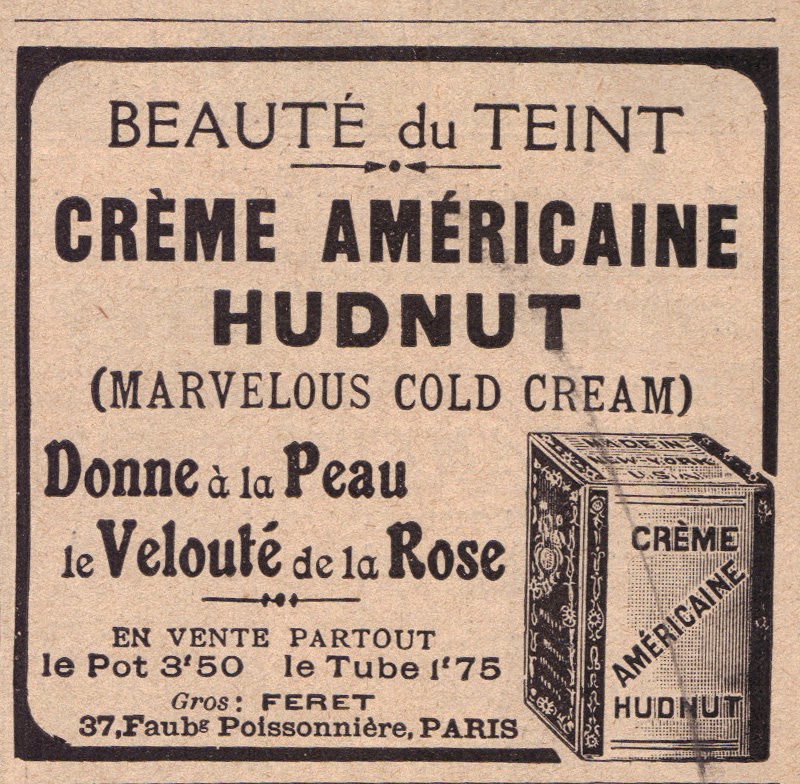 
The increasing demand for Richard Hudnut products meant that the firm needed larger premises by 1905.

The two dwellings located on the site were demolished to make way for an impressive purpose-built six-storey building.

The elegant showroom in their own building further enhanced the brand in the eyes of New Yorkers.

The building also contained manufacturing premises and a shipping department as well as offices. 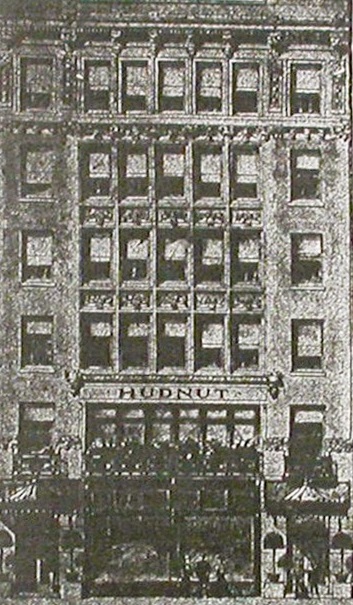 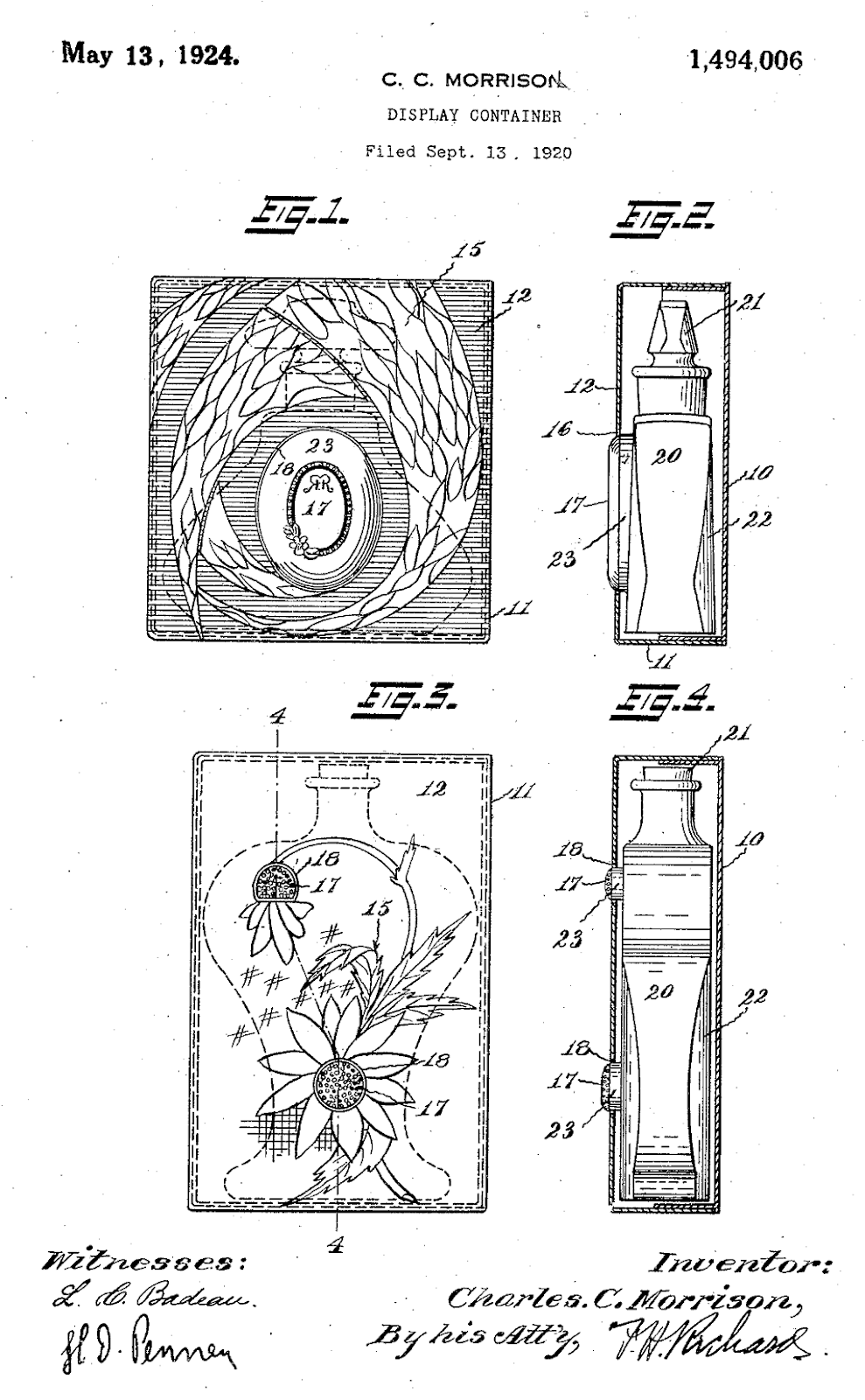