The image above is courtesy of christies.com. The fabulous iron and damascene Meiji Period box was made by The Komai Company.

The term damascene is said to be English and derived from the view that this sort of decoration resembles damask silk. This technique originated in Syria, Western Asia. Some hold the opinion that the term ﻿damascene derives from the name of Syria’s capital city, Damascus. It is believed that the process of creating damascene adornments was first practised over 1,500 years ago. The people of the Orient regard damascene as a symbol of good fortune.

The process is intricate and begins with the chiselling of an image that the artist has been commissioned to craft. This technique has changed very little in its 1500 year history. It is painstaking and the artists are highly skilled. Once the image has been created with a tiny hammer and chisel, fine strands of 24 carat gold and sterling silver are inlaid. As you can imagine this artistry is complex and sometimes these artists were left with poor eyesight. After the gold and silver had been applied, the decoration was brushed with ammonia and this was dried by placing the item in an oven. The desired shade of blackness was created by applying lacquer which is then burnt off. To achieve the densest black decorations this process has to be completed many times. To prevent the degradation of the adornment, it is boiled in green tea which makes it durable and fixes the decoration. The final stage is the polishing of the gold and silver with charcoal which ensures a lustrous sparkle which will last.

The technique of damascene was brought to Japan along with Buddhism via the Silk Road. Luck bestowed from damascene decorations was never more needed than in battle. Japanese weapons were traditionally decorated with intricate damascene embellishments.

The Silk Road was and still is a network of routes connecting the East and West. As the name implies the predominant trade was silk. At one time only one country in the world possessed the knowledge needed for the production of silk. This was China. The Chinese jealously guarded this trade. It is thought that this trade began in the Han dynasty (207 - 220 BCE). According to legend, the Chinese Empress Léi Zǔ  (also known as Xi Ling-shi) discovered silk worms by accident. Whilst sitting in her garden a milk worm cocoon fell into her cup of tea from a white mulberry tree. The heat of the tea caused the silk to unravel from the cocoon. Léi Zǔ persuaded her husband, the Emperor Huangdi, to establish a mulberry tree farm where her workers could domesticate the silk worms and cultivate the production of silk for weaving into splendid garments. Great riches came from this secretive trade. At one time it was China's most valuable export trade.

The story of the legendary empress and her discovery of silk was recorded by the Chinese academic, Confucius. Sericulture workers were predominantly women.  For 3000 years this trade was kept a secret and the death penalty was carried out when people were accused of passing on techniques of the trade or attempting to smuggle out silk worms.

The most important trade for the Japanese artisans who specialised in the art of damascene was the embellishment of armaments. Never was good luck needed more than in battle and so the powerful and dramatic damascene decorations were a traditional decoration to be seen on swords, knives and also display stands for weapons. 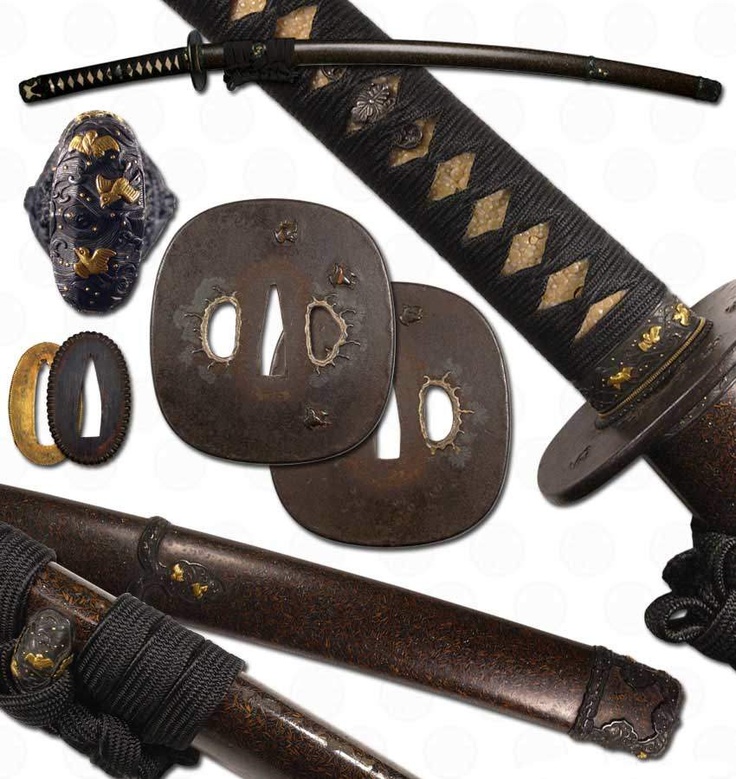 By 1870 the Japanese government began to pass laws to gain more control over the population in the hope of restoring stability after the Meiji Restoration. Farmers and merchants were banned from wearing swords and garments associated with the samurai (first Haitōrei).

In 1873 conscription to the Imperial Japanese Army ensured that the samurai were not the only organised military.

By 1876 the ban on carrying swords was extended to the samurai class. (Haitō Edict).

Businesses that had decorated swords and armaments for generations had to look for other ways to make a living. The supreme skill and artistry was instead used to beautify furniture, luxurious accessories, household objects and  jewellery. Many of these wares were manufactured for the export market.

The French were especially fascinated by Japanese culture and arts.

More information about the French fascination for Japonisme.

The Komai family utilised their superb skills to craft splendid damascene creations like the box shown below. 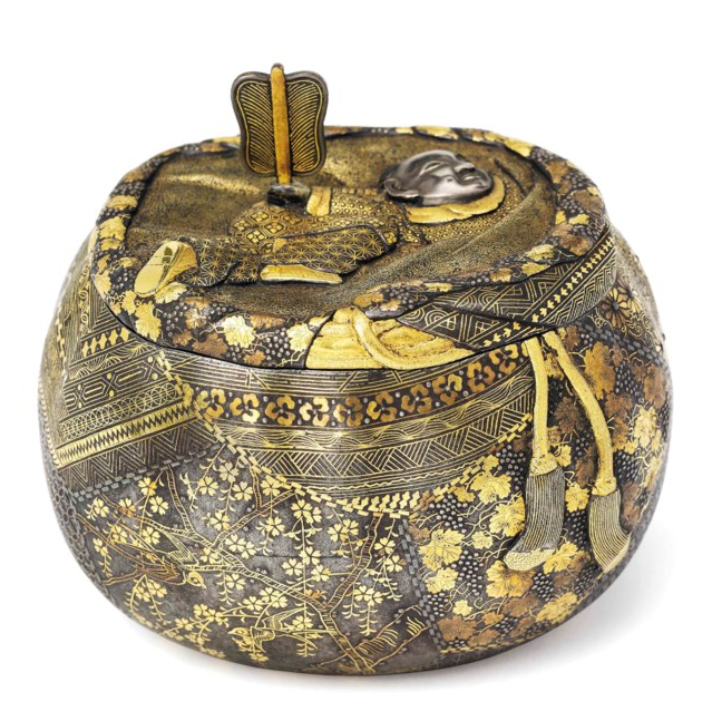 This wonderful antique depicts Hotei’s sack of treasure. Hotei is one of seven gods of luck. Hotei is typically represented as a smiling Buddhist monk with a large round bare belly. In the treasure sack is a resting child who is holding a fan to keep him cool. The fan is more than decorative. It forms the finial. The whole piece is embellished with gold and silver.

The Komai box shown above was crafted by the Komai family of Kyoto. The intricate and precise metal work and adornment is typical of their work. The quality of their wares eventually gained them much appreciation and fame. Originally their principal work was the application of damascene to all manner of weapons and furniture which was used to display swords.

The Komai workshop is most notable for its damascene ironware. The gold and silver inlay was applied to the roughened iron surfaces. The company was known as a pioneer of damascene work. Some of their pieces required kiln firing forty times to achieve the desired shade of dense black.

Many of their works would illustrate scenes from Japanese history or mythology. The faded English language business card above gives the business address of No. 33 Furu-Monzen Nichome, Kioto, Japan. The export trade was vital for this flourishing business.

This artist is often referred to as Komai Otojiro, as at this time Japanese names were presented with the family name first. Much of his damascened ironware was sold in Kobe, which was a center for foreign trade. Presumably merchants acting as middle men were often his customers. There was a huge demand for high quality damascene ironware of the type produced by The Komai Company. As well as ornamental pieces made from iron, Otojiro also crafted furniture. His business acumen, skill and hard work paid off. Artisans trained by The Komai Company ensured that the production of these gorgeous pieces could satisfy demand. Otojiro became prosperous enough to purchase a dwelling in Kobe but unfortunately a fire destroyed his home in 1885.

Seisuke Ikeda also commissioned him to adorn pieces which were then exhibited with much success at the great World Fairs.

Otojiro retired in 1906. His son, Seibei, also worked in the trade until just before WWI. The Komai Company continued to produce high quality pieces until the early 1940s. However, business was affected by World War II and it appears as though the company had to seek other markets after the war. Whether or not this style of adornment went out of favour we do not know but the company ceased to manufacture damascene ironware and furniture.

The company appears to have entered the pearl trade after WWII and The Komai Company is still in the pearl business today.
They are located at:
Shinmonzen-dori Higashioji-nishi-iru, 261, Kyoto. MEIJI PERIOD KOMAI COMPANY IRON & DAMASCENE CUPBOARD
© Sotheby's
The splendid antique shown above is modelled to depict a shrine. The piece is signed ﻿KOMAI﻿ underneath the roof. As well as being highly decorative it is a functional cupboard.

Damascene has a long history in Japan where it was used to decorate katana fittings as well as accessories.

This ancient technique results in such enduringly beautiful adornments and it is still being practised today. All of the following places - Kyoto ( Japan ),Toledo (Spain), Eibar (Basque Country) and Malaysia are renowned for the quality of their work. 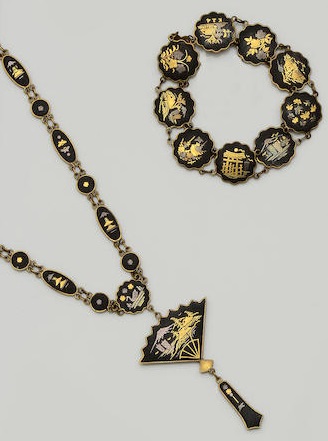 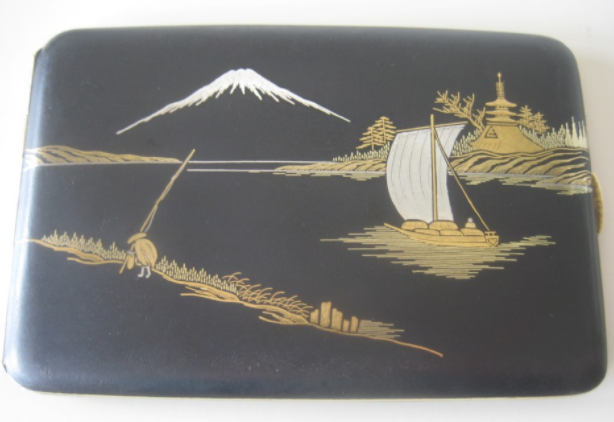 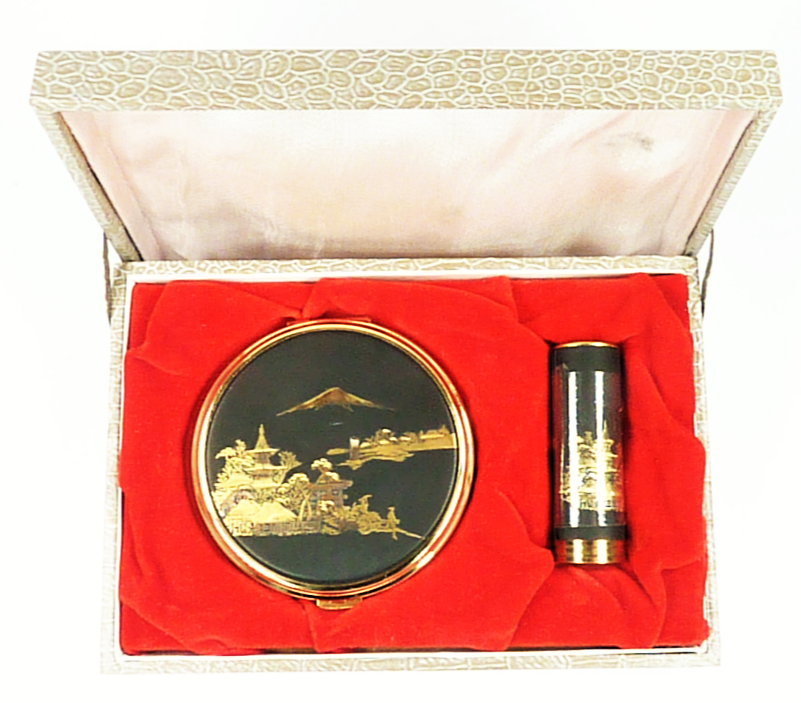 This compact and lipstick are presented in the original case. The Oriental scenes are finely crafted from 24 karat gold and sterling silver. They depict the Ichinomiya, or supreme Shinto shrine of Suruga Province. Mount Fuji can be seen in the background. The brass was coated at the point of manufacture with a layer of transparent enamel so these items will retain their beauty and never require cleaning. Often Japanese makers craft presentation boxes which have a hinge which converts the box into a display stand. The image above shows one of these presentation cases.

It is often hard to attribute oriental vanities to a maker.

However, here are some Queen Star vanities which were made in Japan.

This brand is particularly well known for their damascene musical powder boxes. The Clover vanity shown above is embellished with damascene. The gold decorations include a magnificent tiger on the left and on the right an elephant with her calf.  A map of Malaya in the middle with the major cities, including Kuala Lumpur, highlighted in gilt lettering. This musical powder box comes with the original box, neatly stitched grey felt pouch, pink puff signed Clover and card edged sifter.  The tune it plays is Annie Laurie. Many of the Clover brand music boxes are fitted with Sankyo (Japanese) musical movements. The presentation box is signed CLOVER Musical Compact. The base is stamped Annie Laurie. The inner lid is signed Clover. This music box is a souvenir vanity. This 1950s Clover music box has an Egyptian scene depicted in damascene. Around this time Arabian themed vanities were very much in vogue. It is believed that the film Arabian Nights inspired the craze for Arabian themed accessories.

The 1942 film Arabian Nights in which Sabu, Maria Montez, Jon Hall & Leif Erickson starred was very popular. The film is derived from The Book of One Thousand and One Nights. Universal Pictures released a series of exotic tales during WWII. A GOOD EXAMPLE OF THE LOVELY BRAND

Another Japanese brand of twentieth century powder compacts is named Lovely. The compact above shows how similar the Queen Star and Lovely brands are. English names were chosen so that these accessories would be appealing to the American and English speaking parts of the world.

The font of the lettering on the Queen Star and Lovely brand powder puffs looks identical.

The Lovely brand compacts which were shipped to America include an information leaflet that reads as follows:

Gilding gold & silver to copper engravings is known in Japan as

CHOKIN. This incredible art has been handed down from

generation to generation for more than 700 years in Japan.

This stunning Chokin art works first appeared on the armament

of the mighty samurai warriors in the late 12th century.

Today it is now available for your personal collection! This New Light powder compact is adorned with a 24 karat gold and sterling silver damascene landscape, which depicts the supreme Shinto shrine of Suruga Province.  On the left hand side we can see K24 (24 karat gold). The interior case is fitted with a heart shaped mirror. The brass is a deep rich gold tone. The inner lid is heart shaped too with an attractive embossed design. The compact is signed New Light. The pristine puff and sifter are also heart shaped. The brass is lacquered and so it will not tarnish as long as the protective coat is not damaged.