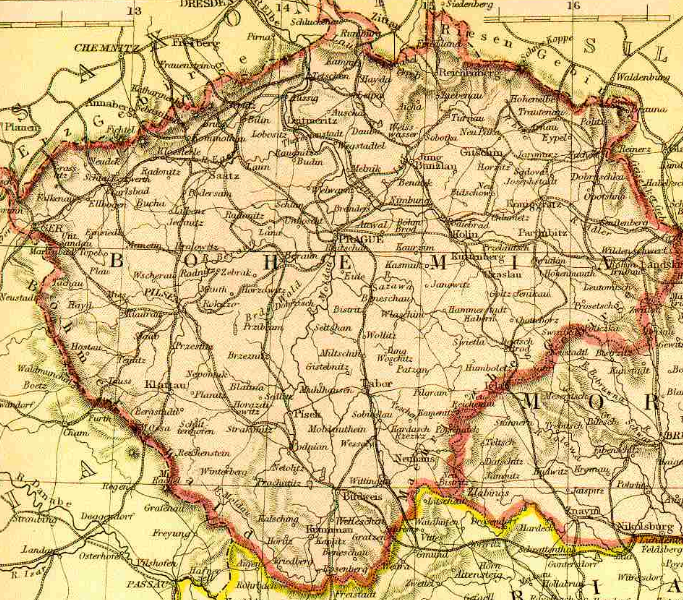 Before WWII Czechoslovakia was made up of Bohemia and Moravia in the west and Slovakia in the east.

At the turn of the 14th century trade of Bohemian silver to Venice was already well established. Archaeological finds from Bohemia and Moravia lend weight to the theories that that silver bullion from this area was exported to Italy. In return the Italians exported glass to Bohemia. There is a possibility that fine wines were also imported from Italy at this time.

The motivation for procuring the highest quality Italian glass was to provide superb glassware from which fine wines would be consumed.This luxury goods trade dates as far back as the 1280s.

The entries in merchant diaries show that this trade was established during the second half of the 13th century. German and Italian merchants vied with each other to act as intermediaries concerned with the supply of Bohemian silver for over two hundred years.

The coin shown above is a 14th century silver denier which depicts John of Luxembourg who was born on August 10 1296. The coin can be found on display in the British Museum. He was also known as John The Blind. In 1313 he became king of Bohemia. King John is still considered a national hero in Luxembourg. He is revered for his great courage. Even the enemy were in awe of his fearless fighting. Despite being blind he was a brave commander and fought amongst his men. He was killed whilst fighting at the Battle of Crécy (26 August 1346). He was fifty years old and had been blind for ten years.

The long-distance silver trade was sufficient to supply the demand in Central Europe for silver bullion. In the second half of the 13th century Central European German mining experts, as well as settlers from Germany crossed paths with Italian financiers, traders and prospectors. The demand from Venice for silver from this region was huge. Venice became the largest European market of precious and non-ferrous metals for more than two centuries.

Significant quantities of precious metal were found in the mines of Bohemia-Moravia and Hungary. Silver production in Iglau (Jihlava) and Kuttenberg (Kutná Hora) considerably increased in the years between 1260-1350. Silver from Bohemia enabled mint masters to stabilise some of the main currencies. THE SEAL OF OTTOKAR II

Duke of Austria, Styria and Carinthia, Margrave of Carniola

King Ottokar II was known as the Iron and Golden King due to the importance of this region’s extraction of precious and non-precious metals. Ottokar was a member of the Přemyslid dynasty. He reigned as King of Bohemia from 1253 until 1278. Under Ottokar's rule, the Přemyslids reached the peak of their power in the Holy Roman Empire. During the Late Middle Ages, the Kingdom of Bohemia was the main producer and exporter of newly mined silver in Central Europe.

Ottokar was the second son of King Wenceslaus I of Bohemia. As was the tradition, the second son born would study ecclesiastical topics, as the first born son would inherit the throne. His mother, Kunigunde, was the daughter of Philip of Swabia. From his maternal line he was related to the Holy Roman Emperors.

In 1247 his elder brother, Vladislaus died and Ottokar became heir to the Bohemian throne.

Ottokar II and King Wenceslaus I were considered to be great kings. They promoted trade and founded new towns. Ottokar encouraged the immigration of skilled German artisans to settle and work in the most important cities of Bohemia, Silesia, Moravia and Austria. Ottokar II introduced founding deeds which supported towns, including those for the city of Jihlava (Iglau) which was an important silver mining area. The king also reformed coinage, weights and measures. His expansion ensured that he controlled most of the major towns on the route to Venice.

Silver from the Iglau mining area was crucial for the Venetian mint in its production of coins. 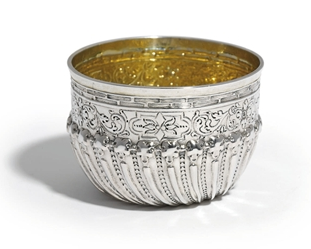 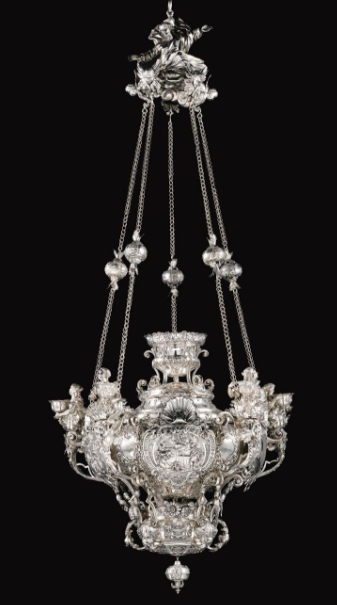 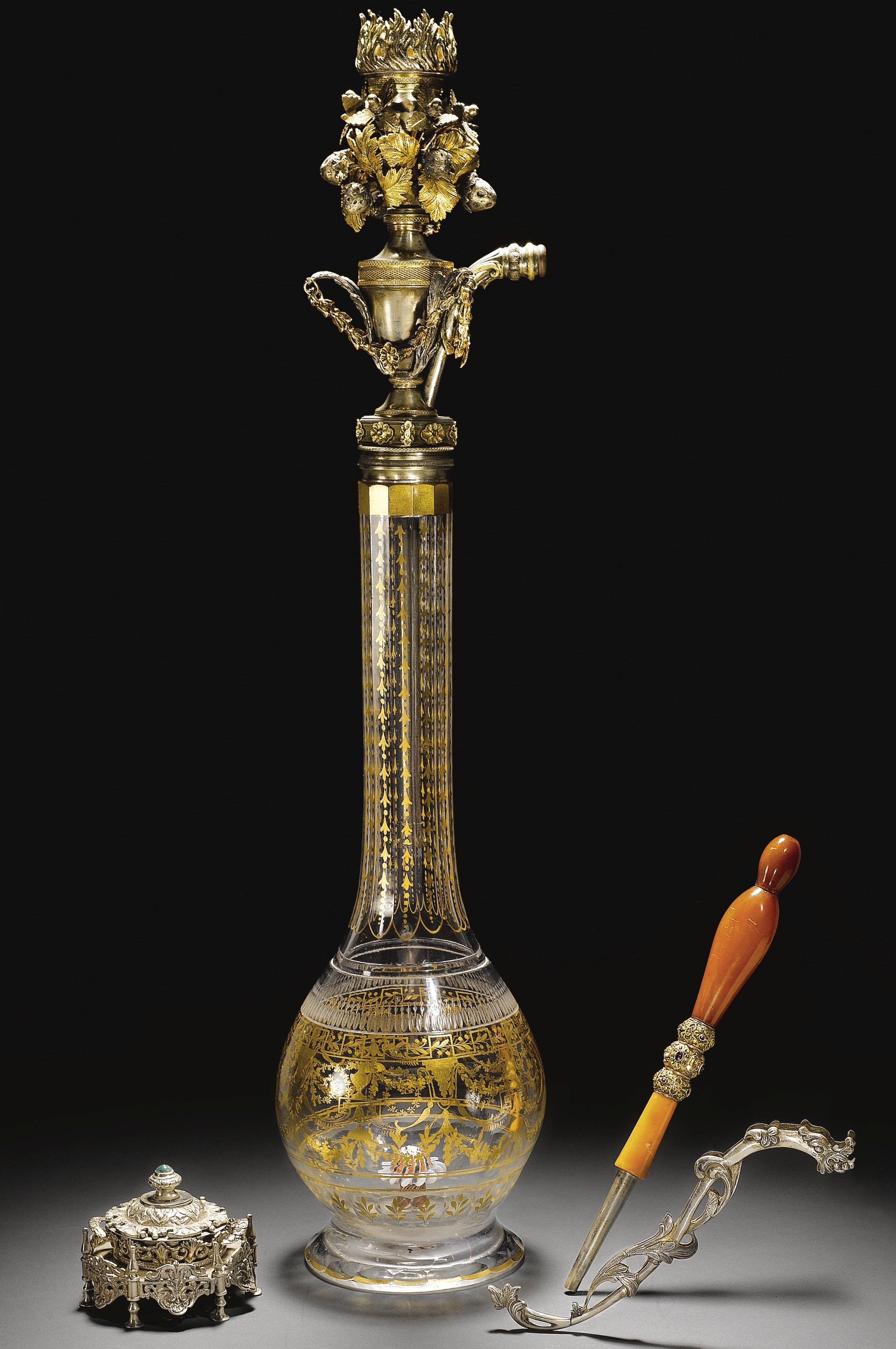 A BOHEMIAN CUT GLASS HOOKAH BASE WITH PARCEL-GILT MOUNTS

Even in the twenty-first century Czechoslovakian silver is very much in demand. As you can see from the images above the master silversmiths of this region are capable of the finest work.

Czechoslovakian silver is sought-after by specialist dealers and collectors of vanities throughout the world. 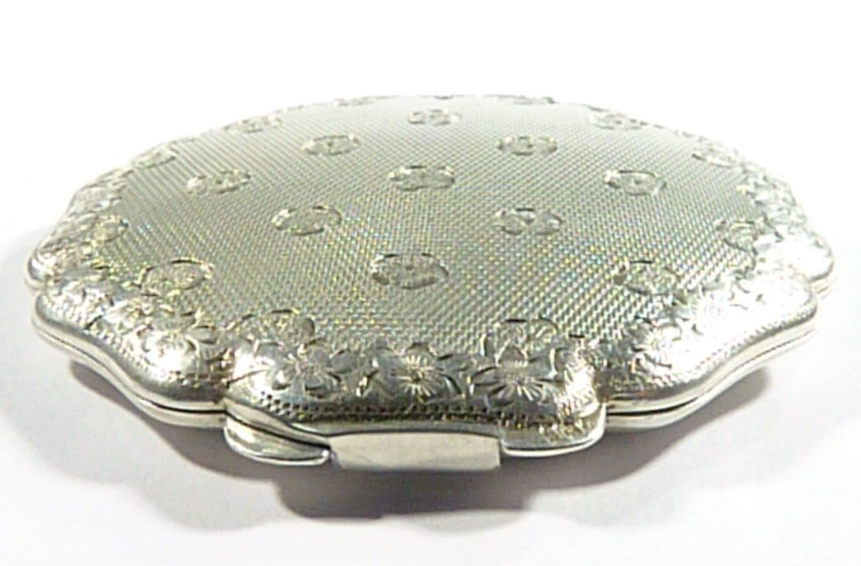 Czechslovakian compact mirrors are highly distinctive and are not usually mistaken for vanities from another country. Some of them are small and dainty, as shown above but as a whole this genre of vanity tend to be magnificent and highly ornate. Whereas many other countries were crafting round and square shaped powder compacts in the 1930s and 1940s, the Czech. pieces, crafted from silver have highly elaborate shapes. The ardent following they have in the 21st century is well deserved. Czech. silver vanities are well made, durable and relatively hard to find. The Czech. silversmiths used the bright-cut style of engraving to beautify the silver exterior.

The compact shown above is embellished with niello which accentuates the bright-cut engraving marvellously well. This compact is a Czech. export. We know this as it bears the silver export hallmark. The interior cases of Czech. silver compacts are often embellished with bright-cut engraving around the powder well & mirror bezel. To date all of the Czech. silver vanities we have seen were made for loose face powder, which ties in with the popularity of loose powder in the 1930s & 1940s. At this time compressed face powder was considered harsh on the skin and unnatural in appearance. It was not until the 1950s that compressed face powder became much more popular. The new formulations produced by the likes of Max Factor were much lighter, less likely to cake and more subtle. Bright-cut engraving adorns the panels of the compact shown above which is crafted in a typically ornate style that we often see in Czech. vanities. The main part of the lid is ornamented with an engine turned design known as guilloche engraving.

Typically these vanities bear the hallmarks on the underside and or the top of the thumb catch.

The German occupation of Czechoslovakia began with the annexation of Sudetenland in 1938. In March 1939 the Nazis invaded the Czech. lands. The creation of the Protectorate of Bohemia and Moravia extended to all parts of Czechoslovakia by the end of 1944.

After WWII the region came under Soviet influence until the 1989 revolution.

If the hallmarks are not worn you will probably see numerals as well as the maker's mark.

From 1942-1945 the Protectorate of Bohemia and Moravia used the hallmarking numerals shown below.

These grades of silver were all used by Czech. silversmiths.

The numeral in brackets denotes each fineness.