French medallic artists, certainly those of the nineteenth and early twentieth century are considered to be world class. The work of Roty, Chaplain and Charpentier revived the medallic genre and attracted worldwide interest. The French artists made medallic art a genre equal to sculpture and the best work is so fine it is equal to painting. Practice made perfect and artists such as David d’Andres (1788-1856) would make portraits larger than medallions. They were portrait size - around 8” x 10”. The next part of the process was to use pantonic reduction to reduce the size of their sculptures to the size of medallions, thereby the great detail in the principal work was not lost in the reduction. Hubert Ponscarme is famed for his skill, so much so that he is known as the Father of Medallic work in the ‘modern’ world. By 1863 formal training was offered in creating medallic art. Hubert Ponscarme was the professor in charge of training at Ecole Des Beaux Arts. Many of the finest medallic artists were trained at Ecole Des Beaux Arts, these included Roty, Daniel-Dupuis and Charpentier, to name a few.
By the late 1800s the French medallic artists were noted for the superiority of their work.
They also practised the larger sizes of sculpture. 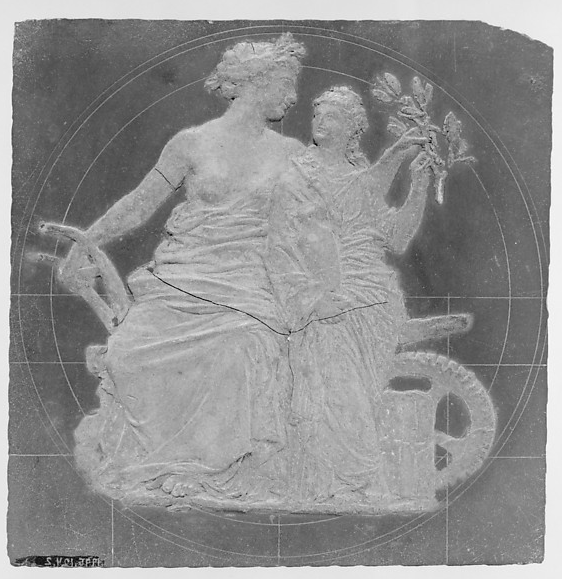 The illustration above shows a model created for a medal which Francois-Joseph-Hubert Ponscarme crafted in 1892. ©  Metropolitan Museum of Art

It was gifted to The Metropolitan Museum of Art. By the late 1800s the French medallic artists were noted for the superiority of their work. The portrait above is of Ponscarme.The medal below was created by Ponscarme for the Universal Exhibition which took place in 1867, Paris. The medal was awarded posthumously to the distinguished architect Captain Francis Fowke (Royal Engineer) who designed many buildings including the Royal Albert Hall and the building that was originally known as the South Kensington Museum, which is now the Victoria and Albert Museum. 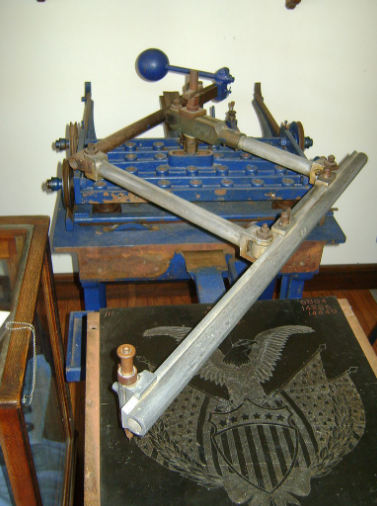 The original use of the pantograph was for copying on a smaller scale. The poignant medal shown above was created by Louis Oscar Roty c.1899.    © parismuseescollections

Original description of the medal:

Cupid seated on a woman's lap, having buried his face in the crook of her neck, tries to console her; the young woman, seated on the ground between a holly and a flowering shrub; reverse of the medal: the French flag, surrounded by laurel, floats between the celestial rays. This vesta case is an antique of great charm. The repoussage decoration on the front is captivating and becomes even more so when the French is translated. Inscribed on the lid "O NYMPHE LE VIN MARIANI VA LE SAUVER MAIS PRENDS GARDE A TON COEVR" - "Oh nymphe the Mariani Wine will save him but take care of your heart".  We see the nymph pouring some Mariani Wine for the ill infant. The naked nymph holds the child tenderly close to her. He is seated on flowing robes that cover her lower body. They are seated on the ground, a tree towers over them. Floral motifs adorn the case.

In 1863 Angelo Mariani created Vin Mariani. The formulation was simply a combination of Bordeaux wine and coca leaves. The wine was said to restore ‘health and vitality’. The ethanol in the wine acted as a solvent and drew the cocaine from the coca leaves, altering the drink’s effect. It originally contained 6 mg of cocaine per fluid ounce of wine but Vin Mariani that was destined to be exported contained more than this - 7.2 mg per fluid ounce. This decision was made to compete with other drinks in America which also claimed to have health giving benefits and ensure vitality. It was quite common that drinks of this era contained cocaine. Coca Cola being one - hence the name. Angelo Mariani was one of the first to realise the benefits of celebrity endorsements. This tonic was very popular and notables such as Queen Victoria, Pope Leo XIII and Pope Saint Pius X were Vin Mariani drinkers. Pope Leo awarded a Vatican gold medal to the wine and also appeared on a poster endorsing its health giving properties.

Angelo Mariani was a superb publicist, as well as "celebrity" endorsements​, ​he engaged highly regarded artists such as Jules Chéret and Louis Oscar Roty to promote his famed Vin Mariani. The images below show the work of the esteemed medalist Louis Oscar Roty, also known as Oscar Roti. These bronze and silvered medals measure 2 1/16" × 1 1/2" and were struck in 1895. In 1896 they were gifted to The Met Museum, N.Y. by Dr. Angelo Mariani. 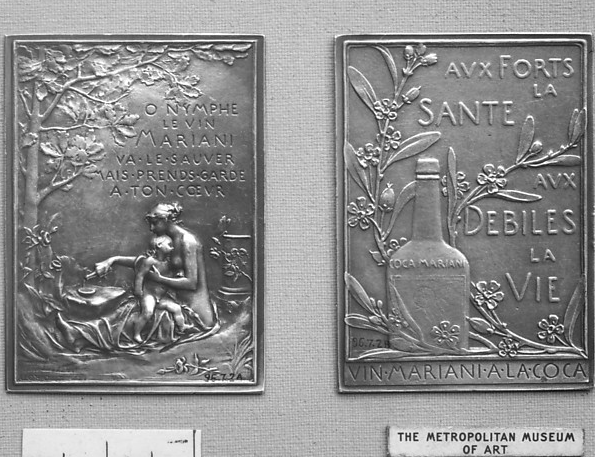 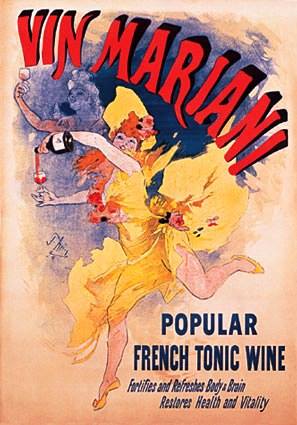 The lithograph above is the work of Jules Cheret. This Mariani Wine advertisement dates to 1894. Cheret was a French painter and lithographer who became a master of Belle Epoque poster art.

He is often called the father of the modern poster. 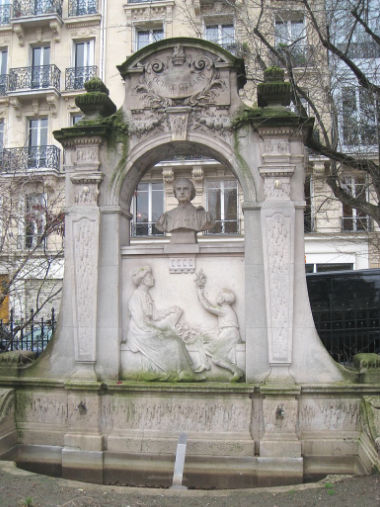 The monument to Octave Greard shown above was a collaboration of Henri Paul Nenot and Jules Chaplain. 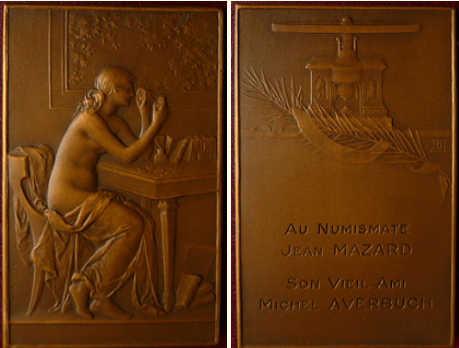 This wonderful bronze medal was crafted by Jean Daneil-Dupuis. It is dedicated to Jean Mazard who was the author of Histoire Monétaire et Numismatique Contemporaine ( 1790-1963 ), which is the main reference regarding French coins. 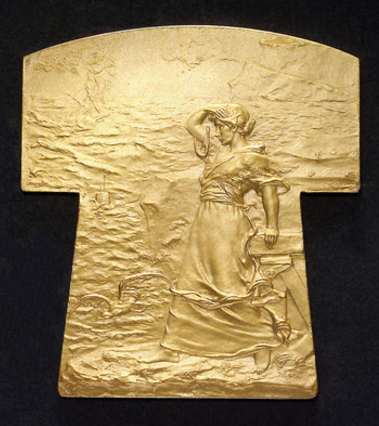 The image above shows a silver gilt life-saving medal created by Georges Henri Prud'homme. It is in the form of a Tau-Cross. The scene shows the power of the turbulent sea, a wrecked ship and in the hinterland huge cliffs. A lady is standing on a rock, looking into the distance, her hand is resting on timber.

The Tau-Cross is named after the Greek letter. It is a type of Christian cross.

The shape of the letter tau or T represents an ancient crucifix. The tau was also considered a symbol of salvation, due to the identification of the tau with the sign the saved ones were marked on the forehead. (Ezechiel 9:4). 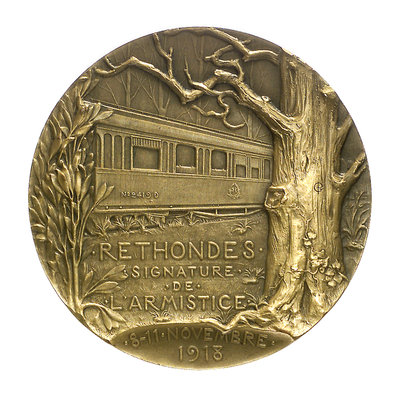 The reverse of the medal shows the railway carriage in which the Armistice was signed. The Armistice medal was created by Georges Henri Prud'homme.

In the foreground a tree with bare branches and ivy at the base of the trunk frames the scene. 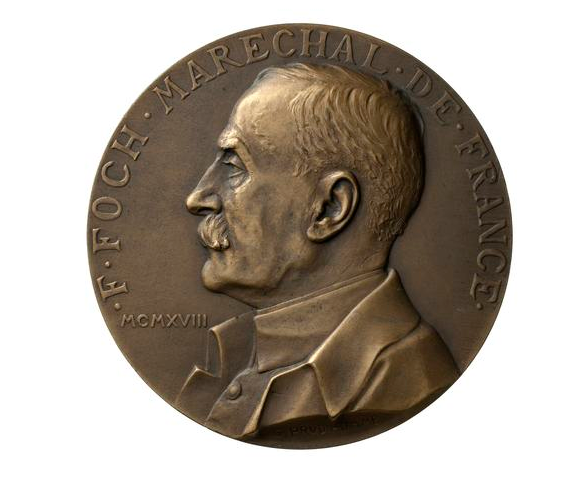 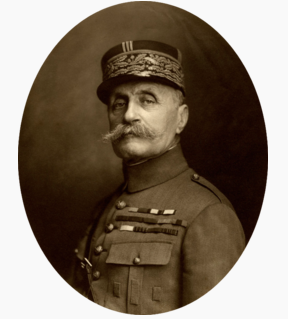 Marshal Foch (above) was the Supreme Allied Commander during WWI. This French general was a highly regarded military theorist. In 1918 Marshal Foch successfully coordinated the American, French, British and Italian armies to defeat Germany. 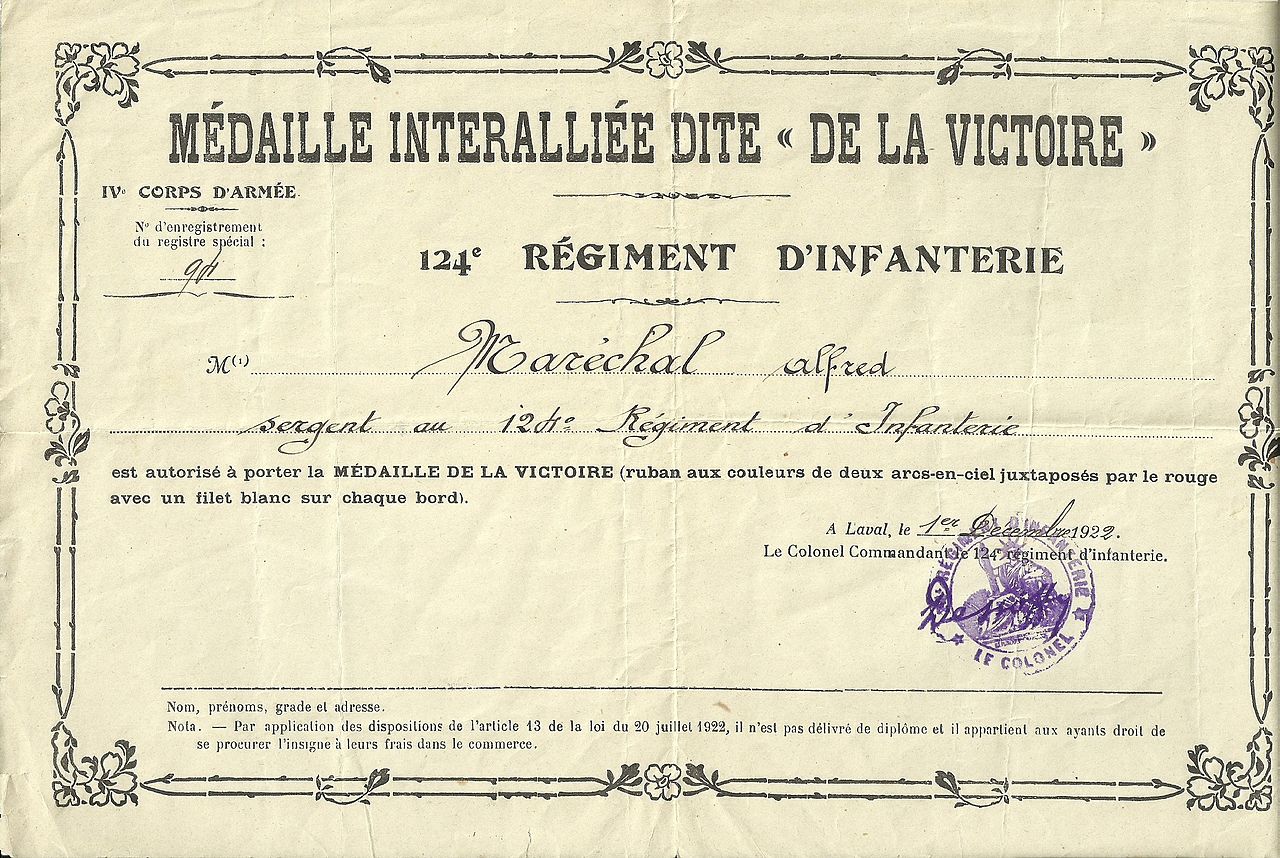 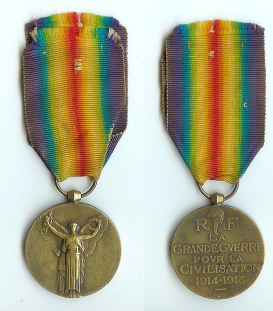 The 1914–1918 Inter-Allied Victory medal ( "Médaille Interalliée de la Victoire 1914–1918") was a French commemorative medal established 20 July 1922 designed by Henry Nocq. It was awarded to all soldiers who served three months between 2 August 1914 and 11 November 1918 in the war zone. It was also awarded to foreigners and nurses who served directly under French command, as well as marshals and generals who had a command for at least three months.  POWs from Lorraine & Alsace too gained this medal.

Article 10 of the establishing law states: "The award of the medal is also acquired by military members who were killed by the enemy or died from wounds of war and those………….. who died of disease or injury incurred in service."

Below is also a Nocq creation. 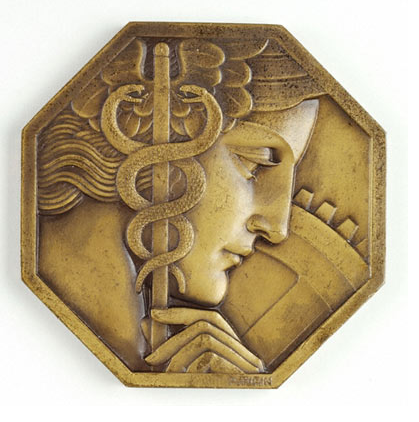 The medallists carried out their work by first having their drawn image made into a metal pattern, then a pantograph was used to reduce these images to the size of a medallion. Often the medals would be finished off by using chemicals to produce the desired patina to age the medals.

The reasons for this are listed below:

The Paris Mint has struck coins and medals since the 15th century and as well as having this long association it has been at the forefront of innovation regarding minting technology & also because of this heritage it attracted the best engravers. The Paris Mint also took pride in its training programme which has been operational since 1866. So the most talented artists worked there, but also their skills were nurtured.

It was in France that the technique of pantographically reducing sculptures was invented. These machines were also fine tuned to attain the high standards required by these exceptionally talented artists. The Victor Janvier machine set the standard for this industry.

Regular exhibitions and the sponsorship of museums did much to encourage medallic art.

In 1899 the Societe des Amis de la Medaille Francaise (the Society of French Medallic Art) was set up by Roger Marx, who was a French art critic.

After WWII the Federation International des la Medaille (FIDEM) encouraged the genre by sponsoring conventions which were held every two years.

In France there were a few privately owned mints, most notably in Paris. They were engaged in striking mints for private individuals.

Even at the famous exhibition of international contemporary medallic art at the American Numismatic Society in 1910 (IECM), 49 French artists sent exhibits almost equal to the 56 American artists. Frenchman Louis Oscar Roty had 82 items on exhibit, which was more than any other artist. Five of the top ten exhibitors were French.